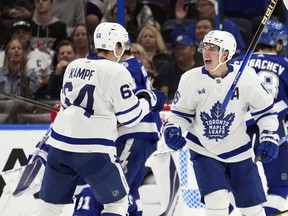 The Maple Leafs winger scored in the second period against the Tampa Bay Lightning, extending his point streak to 19 games and breaking the Leafs franchise record of 18 games.

Marner’s milestone point came at 5:18, and considering the accolades he gets for his defensive work, it was fitting it came while the Leafs were shorthanded.

Marner and David Kampf applied pressure on the penalty kill, forcing the Lightning into some temporary sloppiness with the puck. Kampf got control and passed to Marner, who beat goalie Andrei Vasilevskiy with a low shot from the hash marks.

We apologize, but this video has failed to load.

That gave the Leafs a 1-0 lead at Amalie Arena, though the Lightning tied the game less than three minutes later.

Leafs defenceman Rasmus Sandin, after the morning skate, predicted that Marner would break the record.

“I think so,” Sandin said. “I don’t think that’s what his main focus is right now, but I don’t see an ending for it with how good he is playing.

“It’s a treat to play with him. I probably have the best seat in the building to watch it. It’s unbelievable. The way he skates, the way he is handing the puck, the plays that he makes, some plays I don’t think anyone else in the building sees but him.”

Said Lightning defenceman and ex-Leaf Zach Bogosian earlier Saturday: “It’s good to see a friend having success. He’s such a complete player. It’s talked about how many games he’s putting together in points, but just as impressive is the impact he has defensively and away from the puck.”