London police are investigating a suspicious fire Saturday night at a home in the city’s south end.

Emergency crews were called to a house near White Oak Road and Bateman Trail at about 5:12 p.m. Saturday, police said.

The London Fire Department said on Twitter crews were using a defensive strategy to attack the flames at the home at 3207 White Oak Road.

At about 6:30 p.m., the fire department said in Twitter it was still working to control the “stubborn fire” and said no injuries were reported.

A damage estimate was not immediately available.

White Oak Road was closed in all directions between Bradley Avenue and Southdale Road for the investigation but has since reopened.

London police had asked nearby residents to keep their doors and windows closed because of thick smoke in the area. 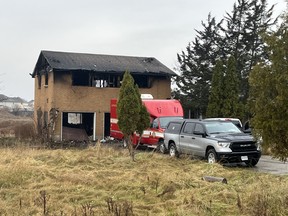 Police and fire crews remained at the scene of a house fire on White Oak Road on Sunday Nov. 27, 2022. The home and adjacent land were slated for redevelopment into a 87-unit condo complex. (Jennifer Bieman/The London Free Press)

Police and fire investigators remained at the scene of the gutted home Sunday morning.

The property at 3207 White Oak Road, and a neighbouring parcel at 3195 White Oak Road, are slated for redevelopment. Whiterock Village Inc. is proposing an 87-unit townhouse complex for the land. A city hall public meeting on the proposed housing development is scheduled for Monday afternoon.