The Met Police has insisted it is ‘fully prepared’ for Just Stop Oil disruption, amid increasing pressure from the Prime Minister to crack down on the protests and warnings that the group plans to target London’s roundabouts tomorrow.

In the last couple of months, the environmental activist group has been using civil resistance and direct action as part of its campaign to stop future gas and oil projects from going ahead.

Police said campaigners are planning disruptive activity in London from November 28 to December 14.

They are said to be planning to ‘swarm and block’ roundabouts in a fresh wave of action targeting road users, expected to take place during rush hour tomorrow.

The Met are coming under pressure to crack down more rigorously on the protests, with sources saying Rishi Sunak has increasingly expressed his frustration in No10 meetings about the ‘disruption to law-abiding citizens’ everyday lives’.

The Met Police has insisted it is ‘fully prepared’ for more Just Stop Oil disruption in coming weeks. Pictured: officers escorting an activist to a police van following a demonstration on an overhead gantry on November 10

‘We understand they are now set to cause further disruption in London in the run-up to Christmas, from 28 November to 14 December. However, we are again fully prepared.

‘We have a very experienced team with robust policing measures in place to respond quickly and effectively to any incidents of serious disruption to London. We also have specialist officers available to deal with a range of tactics, including sophisticated lock-on devices.

‘We will always try to work with organisers so that protests can go ahead safely. However, Just Stop Oil do not engage with police in advance to share where they may protest or how many may be involved.

‘As their actions are spontaneous and could take place anywhere across the capital, we are having to use more officers to respond, regardless of whether any action takes place or not. 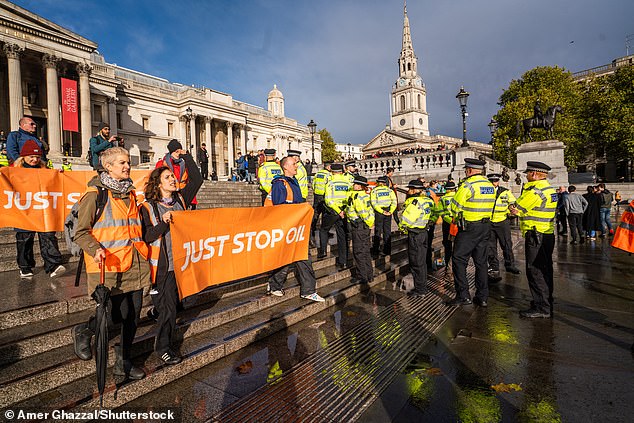 More than 11,000 officer shifts in the Metropolitan Police have been devoted to anti-JSO operations. Pictured: officers at a JSO demonstration in Trafalgar Square earlier this month

‘I completely understand the frustration and anger felt by the public, who are seriously disrupted by a relatively small number of protesters and their deliberate tactics.

‘Activists are affecting people’s businesses, their lives, whether they are on their way to a doctor, a long-awaited hospital appointment, on their way to work, to interviews, or to collect children.

‘Therefore, I again urge Just Stop Oil organisers to engage with us to minimise disruption to Londoners.’

Ms Findlay assured the public the Met will continue its ‘core business’ while also managing the protests.

‘Where activists cross the line into criminality, the Met will provide a proportionate policing response,’ she said.

‘We will arrive quickly, deal with the situation efficiently, remove and arrest activists as appropriate and return things to normal as soon as possible. Please do not take matters into your own hands.’ 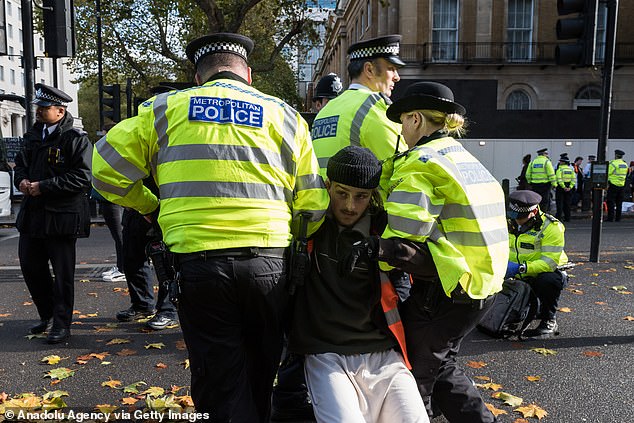 Commander Karen Findlay, of Met Operations, said the police are prepared for the eco-zealots to cause more disruption between November 28 and December 14. Pictured: officers removing a JSO supporter after the group blocked Whitehall outside Downing Street earlier this month

The force arrested 755 Just Stop Oil activists, and charged 182, in October and November. More than 11,000 officer shifts in the Metropolitan Police have been devoted to anti-JSO operations.

‘We are determined to bring to justice all those activists who cause disruption or damage to London,’ Ms Findlay added.

‘We’re working closely with the Crown Prosecution Service and the courts to ensure this happens.’

Although more than 1,800 arrests have been made in relation to the JSO movement since March, Mr Sunak has told Home Secretary Suella Braverman to convene a meeting with police chiefs at Downing Street to ‘set out the Government’s expectations that the police must fully enforce the law’.

Tory MPs have called for JSO to be labelled a terrorist organisation because of the disruption it causes. Gareth Johnson, the MP for Dartford, told the Commons last week that JSO members are ‘not protesters, they are criminals’. 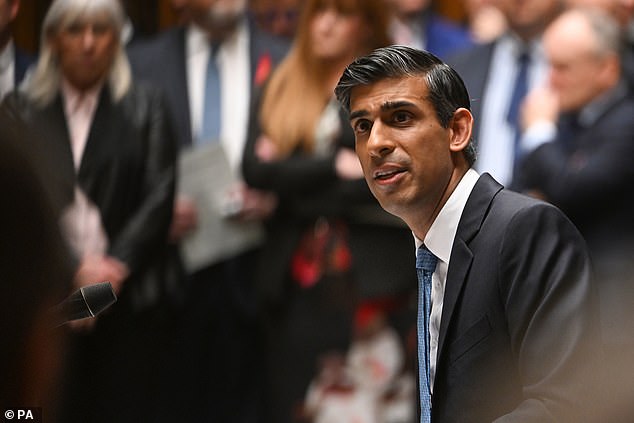 The group wants the Government to commit to ending all new licences and consents for the exploration, development and production of fossil fuels in the UK.

Mr Sunak wants the police to apply more rigorously the measures in the Public Order Bill, which provides police with greater powers to crack down on protesters.

But according to an operational note obtained by the Sunday Mirror, JSO is planning to change its tactics and use a new method of demonstrating that will be ‘non-injunction breaking and will aim to be non-arrestable’.

The group plans to march, ‘as slowly as possible, from key roundabouts, in multiple teams and timed phases’, allowing traffic to move very slowly behind them- unlike previous protests which have seen the environmental campaigners sitting in front of cars on busy roads.

The change of tack, it hopes, means police will be faced with ‘a dilemma’ over whether to allow a ‘legal protest march’ or threaten to arrest protesters, who would still be allowing drivers to progress in their journeys.

Yesterday, former Archbishop of Canterbury Rowan Williams, 72, accused JSO activists of ‘unconstructive’ tactics, and said while he found that sort of activism understandable, he would not ‘be throwing cans of soup on paintings’. 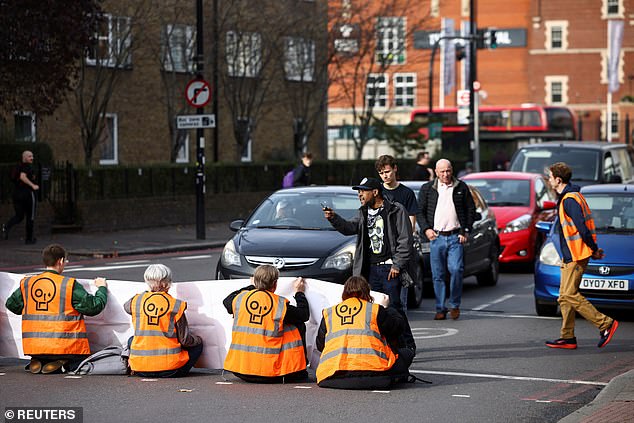 Tomorrow the group plans to march, ‘as slowly as possible, from key roundabouts, in multiple teams and timed phases’, allowing traffic to move very slowly behind them- unlike previous protests which have seen the environmental campaigners sitting in front of cars on busy roads. Pictured: a protest in London last month

In July, JSO activists glued their hands to the frame of a copy of Leonardo Da Vinci’s painting The Last Supper at London’s Royal Academy of Arts, and to John Constable’s Hay Wain at the National Gallery. Last month, activists targeted the same gallery, throwing Heinz tomato soup over Vincent Van Gogh’s Sunflowers.

A Government source said: ‘It is clear there is more that can be done on enforcement… the Prime Minister would like to see the College of Policing guidance on public order updated to reflect the additional powers afforded to the police via the Police, Crime, Sentencing and Courts Act and set out clearly how the police should use these powers.

‘If necessary, he is open to looking at how a code of practice could help ensure the right balance is struck between ECHR and police powers.’

The source added Mr Sunak ‘has been unequivocal that ordinary people shouldn’t have to suffer at the hands of protesters who are taking advantage of their right to protest peacefully’.

A JSO spokesman said in response to Mr Williams’s remarks: ‘We know that Rowan Williams understands the need for civil resistance and has joined actions with Extinction Rebellion.

‘Maybe he should reacquaint himself with the clergy and Christians that have been arrested and imprisoned repeatedly this year for taking action with JSO.’