What does it mean to capture the zeitgeist? Liz Kingsman isn’t sure, but whatever it is, she has caught it in her efficiently titled One Woman Show, which arrives in the West End next month after a sell-out run at the Soho theatre, which won her the South Bank Sky Arts breakthrough award, and on the Edinburgh fringe. It has been hailed as a pitch-perfect takedown of the “messy woman” comedy of Fleabag’s Phoebe Waller-Bridge and others. But its lineage goes back far further than that. “When the conversation around my show was homing in on this one particular piece of work that people thought I was sending up, I was like, no, this stuff’s been going on for a lot longer,” she says.

Not least as far back as Bridget Jones’s Diary, the film version of which she watched at school in Australia, “because it’s Pride and Prejudice, in the same way that Clueless is a modern version of Emma. It’s a fun update. And ‘Come the fuck on, Bridget’ is something I still regularly say to motivate myself to do anything – like when you’re sitting on the sofa with your dog, and you haven’t got up and done your work.”

But it’s strange watching it now, Kingsman adds, “because there are some great performances but also some stuff in it that really dates, such as the way we look at women’s bodies. Bridget isn’t big, even though Renée Zellweger put on weight for the role, and yet she’s treated like she’s enormous. But there are tons of films I like watching that drive me wild with frustration, for instance because there are no women in them, but I have to try and just put that out of my brain because I’m, like, I used to enjoy this.”

When we meet for tea, around the corner from the Ambassadors theatre, where the show will run, I admit I’m nervous, because the comedy of One Woman Show is so entirely meta, and simultaneously such a merciless takedown of an all too relatably flaky woman, that I’m worried I’ll somehow get sucked into the joke machine. “You’re not allowed to be nervous,” she says, with mock outrage. “But yeah, I know what you mean. And it’s impossible to deal with those scenarios. I’ve had it recently with someone who was making jokes, but they were weird jokes. And I was like, how am I even meant to arrange my face right now?”

One of the themes of the show is ambition, “the things you do to pursue your goals”, Kingsman explains. Or as her character puts it, “No one prepares you for being a grownup. I’m hurtling towards the end of my 20s and I still don’t have my shit figured out.” She doesn’t know what sort of sex she’s supposed to be having, how to square a night life with a day job, or if it’s OK to badmouth women who are more successful than her – such as her infuriatingly over-empathetic boss.

When The Simpsons comes up, I just go very quiet, because it’s like not having seen The Godfather or something

The meta-strand – of an actor making a tiny one-woman show because there aren’t enough parts for women in traditional theatre – has been given an extra twist by its move to the West End and then on to the Sydney Opera House. “The idea of this show actually growing and going into these bigger venues – well, does it make sense any more?” She’s been busy reworking it to fit: it won’t be any longer, she says, “it will just have got denser, and sillier.

“I’m getting excitable voice notes on my phone right now from the lighting designer telling me how many pixels the new lights have in them, and all I can think about is, well, how many more jokes does that mean I have to write?” Actually, she concedes, “you’re catching me in a particularly buoyant mood, because I’ve just come from rehearsing with a sound designer. We did some creative work this morning, and now I’m a bit high.”

So who is Liz Kingsman and how did she arrive so suddenly on the brink of West End stardom? “I don’t know,” she says, “it feels so at odds with the things that I find nourishing, which are alone-time and thinking and reading, and all these things that make me sound incredibly introverted. I don’t know who this woman is who thinks she can go on stage and make people laugh, so I’ve been trying to figure out where she comes from, just from a psychological point of view.”

The prosaic answer is that she came out of a Sydney childhood in which Kingsman would watch late-night comedy shows on TV with her British mother. “I was brought up on a diet of pure BBC comedy. My mum was a very bad influence on me in terms of television viewing habits. We’d go to the library and rent DVDs and then binge-watch them until 2am on a school night.” Kingsman knew all about Smack the Pony, Big Train and The Mighty Boosh but nothing about American comedy. “When The Simpsons comes up, I still go very quiet, because it’s like not having seen The Godfather or something.”

Both her parents are graphic designers and she is their only child. They are as baffled as she is by the turn her life has taken, she says. She wanted to do physics at school, thinking it would help her to become a director, but dropped it because of a timetabling clash with drama. “They insist that they’ve always known I was going to be a writer, because I did a lot of writing as a kid. The curveball for them was the performer side. And I still don’t think they can join the dots, but I can’t either, because I’m very private. I really don’t ever want to be funny as myself. I would never want to become a presenter or go on a panel show.”

She did a property search on an estate agent’s rental website: garden, two bedrooms, dog, anywhere in Britain

After school, Kingsman moved to the UK for an English literature degree at Durham University, where she hooked up with the first of a series of friendship groups, including Stevie Martin and Tessa Coates (of Nobody Panic podcast fame) with whom she teamed up as the cult YouTube sketch trio Massive Dad.

She went on to live in north London as part of an eight-person houseshare of a four-bedroom house. “One person was genuinely living on a mattress in the pantry. That group is really good at going on holidays, so I look in my diary and say, ‘Oh, I’m going to Tuscany this summer. Who knew?’”

She’s also part of an all-male WhatsApp group who go on Imax outings to see space shows: “Anything that’s big and spacey, Christopher Nolan-esque is an Imax experience.” Finally, and most importantly to the life of One Woman Show, there’s the all-woman improv group she met through weekly comedy evenings at a fringe theatre, the De Beauvoir Arms. They formed a group called Sorry, who were due to provide half of the bill when she first trialled One Woman Show at the Vault festival in 2020. “The idea was that I was going to do half an hour of this thing I’d written, then they were going to come and save the night.” But her material grew to an hour, so they had to throw in an interval and extend the evening. 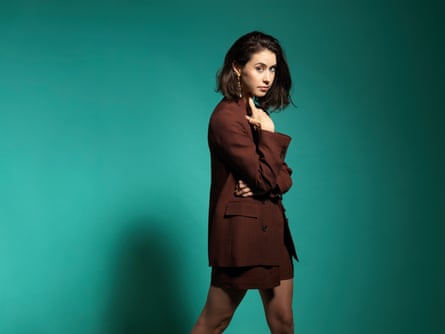 Photograph by Perou. Hair and makeup by Celine Nonon.

The final preview night was a few days before the first lockdown. “Then we sat on the show for a year and a half while I spent every waking minute playing with my puppy.” It’s a cockapoo named Emmett, after Emmett Brown from Back to the Future. They moved down to Dorset, after she did a property search on an estate agent’s rental website: garden, two bedrooms, dog, anywhere in Britain.

Unlike one location of the 2019 comedy series Down from London, in which Kingsman and Graham Dickson starred as an odd couple trying to fix their relationship with awaydays, her home is not by the sea. But it’s just close enough to London and its Eurostar terminal to allow her to keep up her other life as a rising star of French TV comedy. She’s currently working on two French shows: a third series of Parlement, set and filmed in the European parliament and broadcast in Germany and France (she plays an English parliamentary assistant), and the first series of Icon of French Cinema, about a French Hollywood star returning to Paris. “So I’m between Paris and Strasbourg and London, which is not as glamorous as it sounds: it’s just a lot of Eurostar food.”

It also gives her time to write. She’s not speedy, as she learned when she was briefly hired for a news-based daily comedy show on a visit to see her dad in Australia. “It was so satisfying to discover that I never want to be in that kind of environment where you have to write a joke under pressure,” she says. But she knows she has a story to tell. It’s that “women can be flawed and chaotic, they can experience self-loathing and jealousy, and they can be up themselves or narcissistic or crude and abusive. The more we showcase those qualities the stronger we get. We need more on the story of women.”