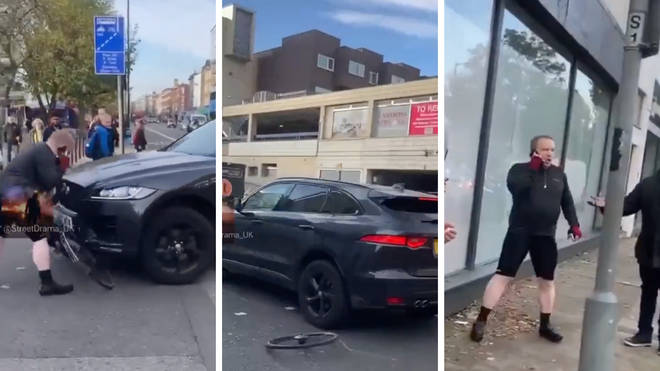 Video footage showed a driver crushing a bike with his car.

This is the moment a driver crushed a cyclist’s bike by driving over it in a road rage clash in north west London.

Footage filmed by horrified onlookers showed a cyclist and motorist in a furious row on the junction of Kilburn High Road and Brondesbury Road.

In the shocking clip – that sparked a row over who might be to blame – the motorist, driving a £47,000 black Jaguar SUV rams into the bike, while the cyclist, who is believed to have been pushing it across the road, speaks on his phone – apparently calling police.

Read more: Hapless ‘cat burglar’: man who grabbed keys through cat-flap before sneaking in the back door jailed

The driver then rams into bicycle, crushing it into pieces, to horrified shrieks from members of the public, with the lycra-clad cyclist jumping out of the way in the nick of time before his bike is flattened.

A man then gets out of the car and confronts the cyclist, who can be heard saying on the phone: “He’s now threatening me again.”

Members of the public appear to try and intervene, with car horns sounding around the incident.

The clip has divided opinion over who was in the right.

One social media account branded the driver a “lunatic”, with another saying he showed “very dangerous behaviour”.

However another questioned why the cyclist was “standing in the middle of the road, blocking it with his bike and talking on his mobile phone”.

Others have said both were in the wrong.