Knife suspect, 50, who was pinned to ground by police officer with his knee on his neck walks free from court after saying he had blade to repair bike inner tube

By Eirian Jane Prosser For Mailonline

A knife suspect has walked free from court after he was pinned to the ground by a police officer who put his knee on the man’s neck.

Marcus Coutain, 50, was stopped in London after he was found with a carpentry knife in his pocket in Islington, North London.

Mr Coutain has now been cleared of the possession of a knife charge, claiming he had it to repair a bike inner tube.

Jurors at Aldersgate House Crown Court deliberated for under two hours before reaching their verdict.

The suspect had been stopped by PC David Herald and PC Hoyin Chan on July 16 2020.

The court that PC Herald had placed his knee on Mr Coutain’s neck ‘like George Floyd’ in an attempt to stop him escaping.

Marcus Coutain, 50, was stopped in London after he was found with a carpentry knife in his pocket in Islington, North London. He was pinned to the ground by by PC David Herald and PC Hoyin Chan on July 16 2020

George Floyd was murdered by a police officer who knelt on his neck and back for nine-and-a-half minutes on May 25, 2020.

Body camera footage from PC Chan showed Mr Coutain, wearing a green t-shirt and jeans, waving his hands in the air saying ‘what, what’ towards the officers.

The officers can be heard shouting ‘stay, stay’ with PC Herald wrapping his hands around Mr Coutain’s throat and putting him into a headlock.

Coutain can be heard screaming and saying: ‘What I haven’t f***ing done anything’, ‘my neck’, ‘I can’t breathe,’

PC Herald can be heard saying ‘stay down, you can breathe’ before adding that members of the public at the scene were ‘making s*** up’.

Giving evidence to the courtroom today, PC Herald explained to jurors: ‘That was in relation to them saying I was kneeling on Mr Coutain’s neck and that I was doing it on purpose similar to George Floyd.’

He added: ‘(Coutain) was highly aggressive. I could hear him loudly shouting ‘what, what’. 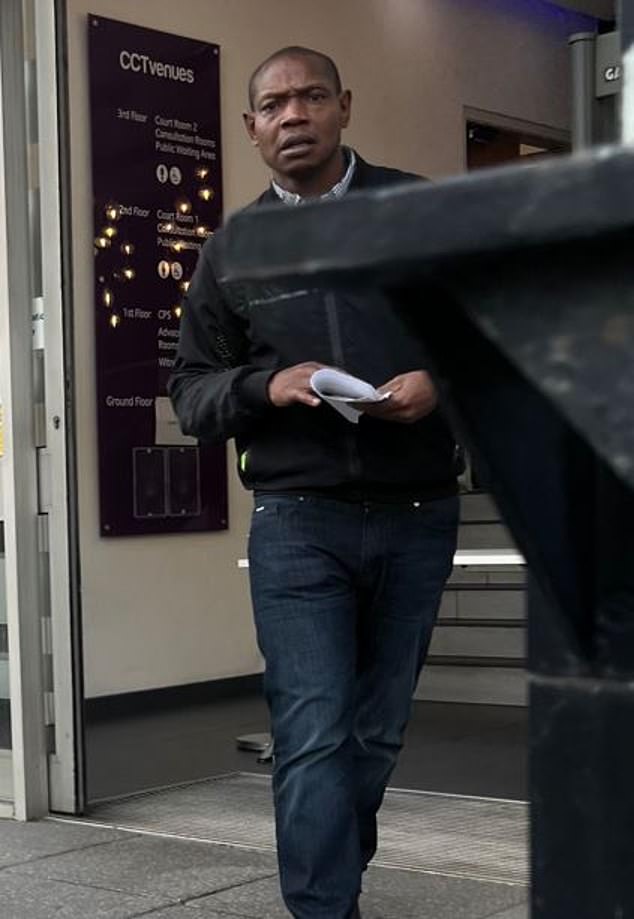 ‘I saw him initially running from PC Chan, he had puffed his chest out with arms out wide as if wanting to fight.

‘Mr Coutain was going to offer us serious aggressive resistance, so at that point PC Chan and I went to detain him.

‘PC Chan managed to grab hold of one of his arms I grabbed hold his left shoulder, what resulted was a bit of a roll around in an effort to securely detain him.

Prosecutor Anna Dutka acknowledged in her closing speech that PC Herald’s behaviour was ‘unacceptable’ but added ‘what he did and how he acted is not for this criminal courtroom or this criminal trial.’

Rhys Rosser, defending, said: ‘Mr Coutain didn’t ask for a solicitor because he knew he did nothing wrong. All he was doing was fixing a bike wheel

‘It may have been a surprise to you that that craft knife was illegal to carry that that sort of thing ends up in the crown court.

‘It was probably more of a surprise to you that that was illegal when that item got shown to you because it’s just so small.

‘Did you really expect that that would be against the law? Certainly, Mr Coutain didn’t.

‘If you return a guilty verdict, you’re effectively criminalising someone for fixing a bike and leaving it in their pocket.’

Mr Coutain, of Finsbury Park, was cleared of possession of a bladed article.