Graham Potter’s smartened up appearance since leaving Brighton six weeks ago might have generated a few news conference questions but he returns this weekend with a Chelsea side beginning to show a style which is very familiar to the home fans.

Potter swapped the serenity and stability of the south coast for the glitz and glamour of west London, where new owner Todd Boehly is also demanding substance to reward his multi-million pound investment.

Previous boss Thomas Tuchel quickly paid the price for losing the faith of the board and the players. With his meticulous and measured approach, Potter appears to be restoring confidence since replacing the German.

On Saturday, there will be another yardstick of his progress in a game which is likely to be a test personally as well as professionally.

“It’s another tough game,” said Potter, who spent three years at Brighton and led them to a highest ever top-flight finish of ninth last season.

“I know the Brighton team very well, I know the quality and I look forward to going back there.”

What has Potter changed at Chelsea?

Potter made a steady, if not spectacular, start when his first game in charge of Chelsea ended in a 1-1 home draw against Red Bull Salzburg in the Champions League.

Since then, the Blues have gone unbeaten in a further eight matches, although that statistic doesn’t tell the fuller picture and masks a few teething problems.

Finding the balance between defensive solidity and attacking spark has been a work in progress, with Potter’s side relying on perspiration more than inspiration to earn a point against Manchester United last weekend.

But Chelsea showed renewed belief, and increasing understanding of Potter’s philosophy, when they clinched their place in the Champions League knockout stage with a 2-1 win at Salzburg on Tuesday.

The hallmarks of ‘Potter-ball’ – a patient but probing possession-based game, with slick switches of gear when openings appear – were clear. 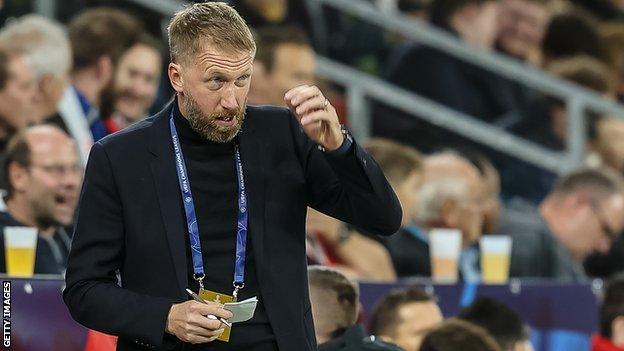 Potter is known for his tactical adaptability and quick-thinking when games aren’t going as planned, illustrated by important formation tweaks against both Manchester United and Red Bull Salzburg this week

The first-half performance was particularly impressive and easy on the eye, leading to former Blues and England boss Glenn Hoddle saying on BT Sport it was “Chelsea’s best 45 minutes under Graham Potter”.

“The football, especially in the first half, was devastating at times,” said Osman.

“They were moving the ball quick and crisp, creating chances and exciting – everything we’ve been asking for from this Chelsea team.”

How are Chelsea progressing under him?

While there was plenty for Potter and Chelsea fans to be encouraged by in Salzburg, their lack of ruthlessness in front of goal will still be a concern to some.

The Blues created several excellent chances but, due to a combination of profligate finishing and inspired goalkeeping by Salzburg’s Philipp Kohn, could easily have ended up drawing.

Nevertheless, they are creating more chances and so, statistics suggest, would be expected to score more goals so far under Potter than they were under Tuchel this season.

“They may have lost belief at the start of the season and it is slowly coming back to them,” added Osman.

“They are also learning how Potter wants them to play and are still progressing under their new manager.

“The squad will have a real belief with Potter after the Salzburg performance.”

A solid defensive platform was the bedrock of Tuchel’s initial success, leading them to the Champions League title in 2021 and a third-place finish in the Premier League last season.

But in Tuchel’s seven games this season, the Blues lost three times and kept one clean sheet.

Potter has re-installed goalkeeper Kepa Arrizabalaga, while young English defender Trevoh Chalobah is another to flourish under the new boss.

The Blues have conceded just twice in their past seven games.

“The second half against Salzburg was all about character. After not taking chances in the first half they had to grind it out,” said Osman.

“Potter had to change it tactically, he adapted the team very well.

“Defensively they were very good. Salzburg had chances but there was some good blocks and good saves.

“There are things to work on, like bringing the ball out from the back under pressure, but overall Potter will be very pleased with the progression they’ve made.”

How have Brighton adapted since De Zerbi took over?

Brighton have not won in the five matches since Italian boss Roberto de Zerbi replaced Potter.

The Seagulls earned plaudits for fearless performances in trips to Liverpool and Manchester City, but ultimately took just one point in the 3-3 draw at Anfield.

In between those games, Brighton claimed only one more point – and failed to score – in matches against Tottenham, Brentford and Nottingham Forest.

“For the best part of three seasons, Brighton have produced their best performances and results when facing the better teams. It is against struggling opponents who park the bus that Albion have issues,” said Scott McCarthy from Seagulls fan website We Are Brighton.

“Potter never really fixed the problem before he left. Brighton flew in his final 15 games because they largely faced sides who played attacking football.

“The challenge facing De Zerbi is to find a way to beat defensive teams and opposition managers who realise the way to get something is a low block.”

Chelsea are unlikely to turn up at the Amex Stadium on Saturday with that mindset and McCarthy believes that should suit Brighton.

“If the football scriptwriters have decided to save De Zerbi’s first victory for the visit of Chelsea and Potter, then that seems like an acceptable trade off for five matches without success.”

What sort of reception will Potter get?

Potter, who managed Ostersunds FK and Swansea City before joining Brighton, said he felt he had to “grasp the opportunity” when Chelsea came knocking.

The stock of the 47-year-old Englishman continued to rise after he led the Seagulls to ninth place in the Premier League last season.

When he left, Brighton were fourth in the table after winning four and drawing one of their first six games.

Former Brighton and Chelsea midfielder Steve Sidwell, who says he is “not surprised” at Potter’s successful start at Stamford Bridge, believes the majority of home fans will warmly welcome Potter back.

“It must have been a difficult decision for him to make,” said Sidwell.

“But that chance to be in the Champions League and managing one of the top clubs in English football was difficult to turn down.

“I’d imagine the majority of Brighton fans will respect him.

“They understand if you get a better opportunity to work for a better company, and when it’s not necessarily about money, you have to take it.”