Antonio Conte was explaining how he had started watching the All or Nothing series on Amazon documenting last season behind the scenes at Arsenal.

‘Really, really interesting,’ said the Tottenham boss, expanding the point to reveal his natural curiosity for learning how rival managers go about their business and tackle problems thrown their way. ‘To be honest, I didn’t finish watching it but sure, in the future I will finish this documentary.’

Didn’t finish it? Oh Antonio, you are going to love the way it ends. Conte’s face creased into a huge smile and he quickly confessed he had indeed skipped forward to savour the ending.

The final episode entitled North London Forever is the one in which Arsenal’s campaign implodes in the space of four days. They crash to defeat at Spurs on a Thursday night in May, 3-0 down and reduced to 10 men inside 47 minutes as they rage at referee Paul Tierney.

Still rattled, they lose their next game 2-0 at Newcastle. From four points clear in fourth with three games to play, they crumble to finish fifth behind their neighbours and fiercest rivals.

‘Shut your mouth and eat it,’ Arteta fumes at his players in the dressing room after the defeat at St James’ Park, branding their performance ‘embarrassing’ and ‘unacceptable’. His players sit in heavy silence. 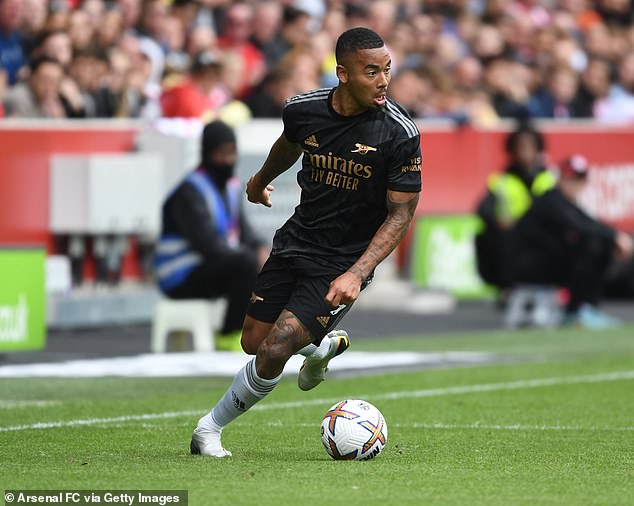 It was in their hands. They blew it and the disappointment was a sign of their progress after two eighth-place finishes. Progress that has continued.

Of their eight Premier League games since Newcastle, Arsenal have won seven, scoring 22 goals, and are top of the league as they prepare for Tottenham again.

The addition of Gabriel Jesus looks inspired. Jesus has been outstanding, liberated from Manchester City, adding energy and intensity up front and enabling Arteta to shift his team higher up the pitch.

With Oleksandr Zinchenko and William Saliba bolstering the defence, Arsenal have pace at the back to offset the risk of the space they abandon when they press forward in opposition territory. ‘I think they’re better than last season,’ said Conte. ‘They made good signings, especially Jesus and Zinchenko from a club like Manchester City, two players used to winning. They have a winning mentality. 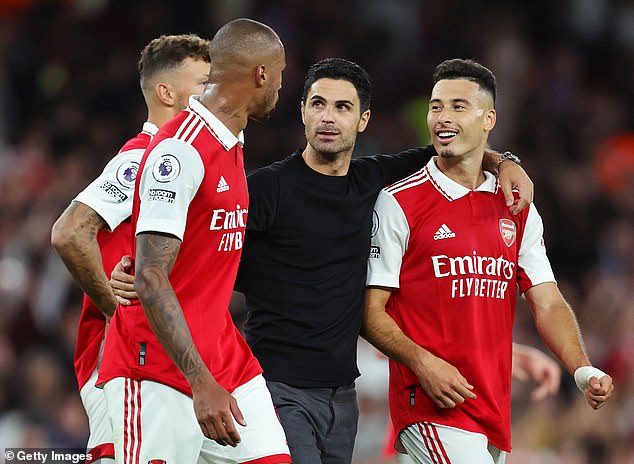 ‘It’s important. I can see they have improved the level. Not only the quality but the mentality.’

There is always a sense of subtext when Conte speaks. He would have liked to sign Jesus and Tottenham did make an enquiry but the transfer to Arsenal was already agreed.

He would love to acquire title-winners from City’s squad, the strongest squad in the country in his view, but Spurs ended up spending their millions instead on promising players from Everton and Brighton.

Even as Conte dismissed the theory this week that he might fancy a return to Juventus, with his most convincing commitment to a long-term future in north London, his gushing praise for Arsenal’s faith in Arteta came with a whiff of a coded message to his own chairman Daniel Levy. 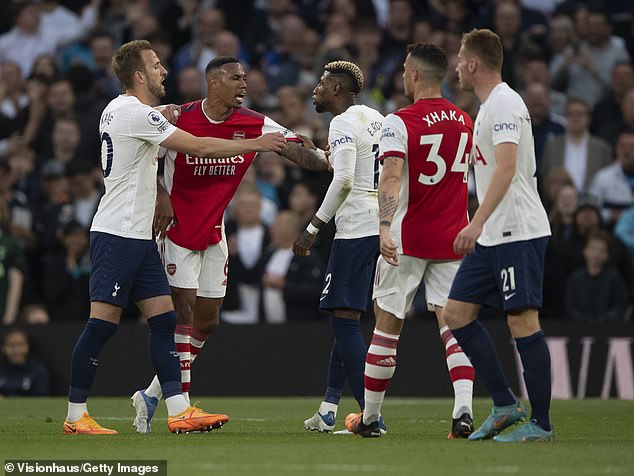 ‘The manager in every decision he takes has to have a good explanation to the club. Why he wants this and not that player. It is right for the manager to show the vision, and then the club have to agree.

‘To have a great connection, a great link between the manager and the club, you will have a future much better than the present.’

Conte, however, will eye Arsenal as prey. Like their north London rivals, Spurs are better than they were when the teams met five months ago. Closer, too, to their manager’s vision. Wiser, grittier, more streetwise. Bigger, more physical. More menacing because of it. 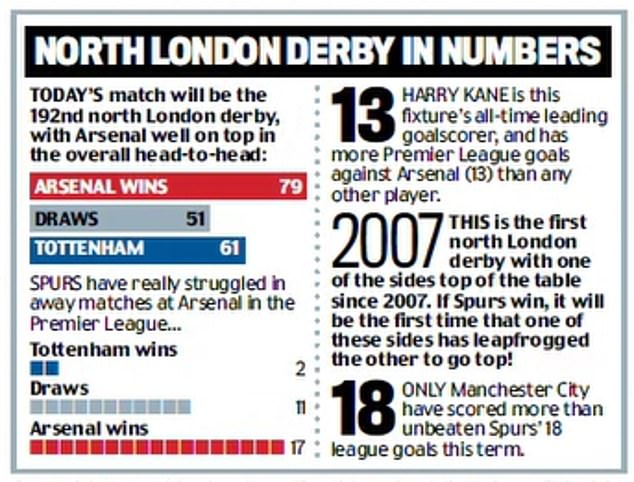 Without being particularly easy on the eye, they are unbeaten since April. Only two points behind Arsenal, Spurs would go top with a win, at least until the Manchester derby tomorrow.

Conte rankles at the accusation but his team are most dangerous when they sit deep, concede possession and strike on the counter-attack with Harry Kane, Son Heung-min, Dejan Kulusevski and Richarlison.

They can be direct and clinical, and the Spurs boss may not be too upset if Arsenal go hurtling into this derby full of confidence, determined to show how good they are, determined to avenge that damaging defeat in May.

All that and more promises to make this a fascinating derby in north London. As much a test of Arsenal’s maturity and know-how as their quality.

Despite their progress, they have been undone on their one big test of the season, at Manchester United. This is the next examination of their top-four credentials.

Have they learned a lesson from Old Trafford? Are they ready for this fine start to evolve into something like a title challenge? Are Tottenham? Will the final episode be different this time? 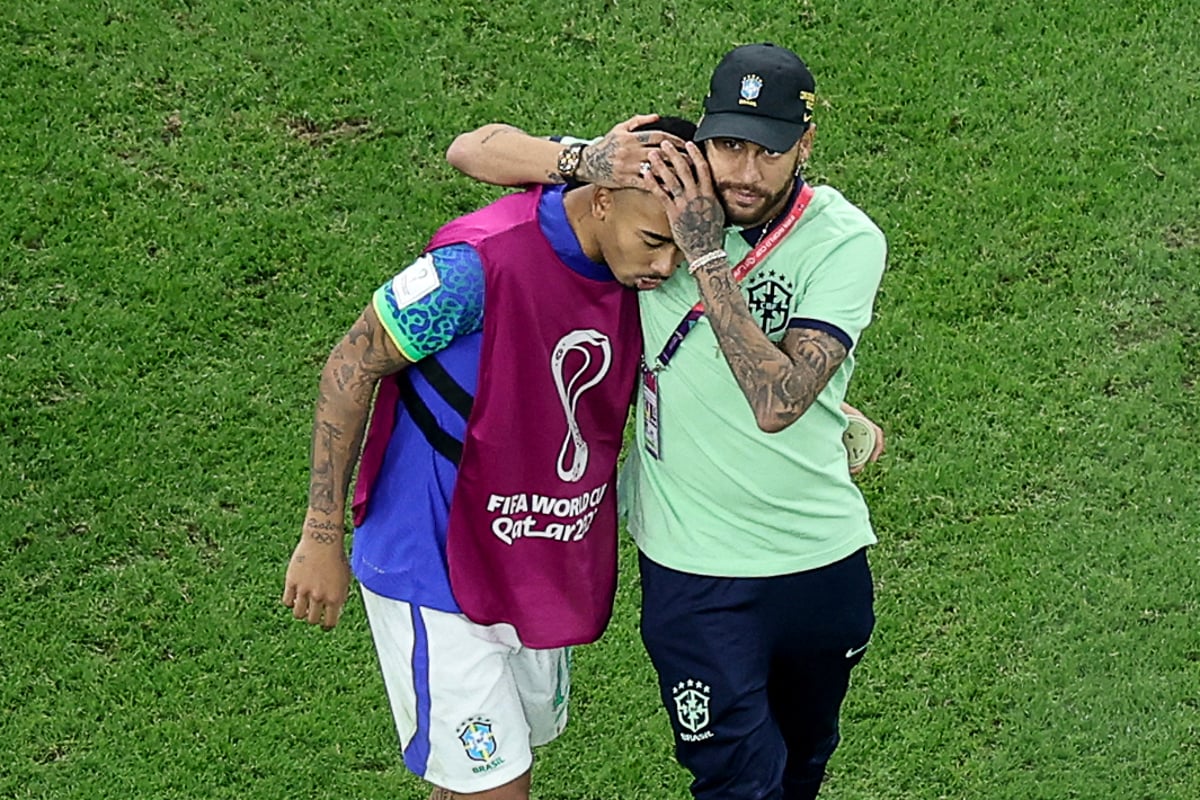 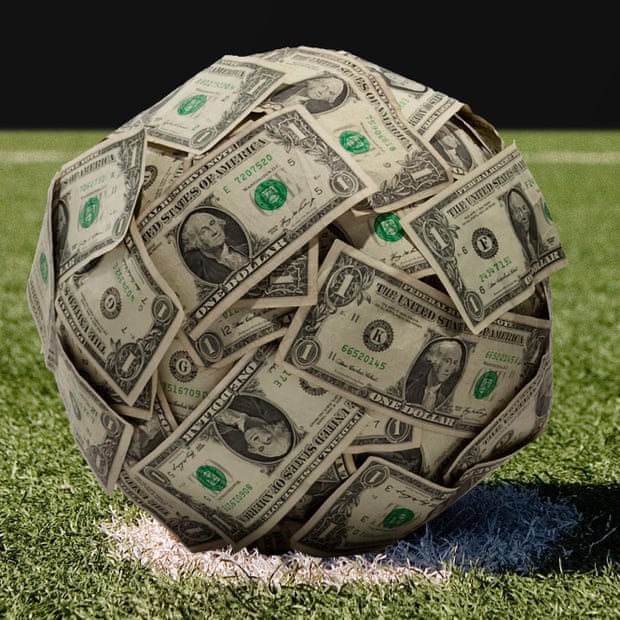