Shortly before 12.30pm on Friday, a policeman announced to the crowd at Buckingham Palace that the gates were full, that all floral tributes should be laid elsewhere. But the queue silently ignored him. They moved on, clutching their roses, their sunflowers, their marigolds — some homegrown, some with the price tags recently peeled off. They were determined to go home empty-handed and full-hearted.

These are the days that Britain does well, when the country shakes off its self-doubt and pulls itself to attention. The mood outside the palace was not distraught — there were few tears — but dignified. The crowd was strikingly diverse. People arrived in black ties and in baseball caps, from all social classes, from Britain and from overseas.

“I don’t think I was prepared for the quiet,” said Bob, a former stock trader from north London. He had laid roses together with a note: “The head says it’s futile, yet the heart wants to have its say.” In truth, everything that could be said about Queen Elizabeth II has probably been said, but the sentiments still had to be felt and shared. People took selfies and posed for pictures. Was this the done thing? Who knew — the last time a monarch had died few of them were alive and cameraphones were decades away from being invented.

The events following the Queen’s passing had been meticulously planned, but the public’s reaction could never be. In 1997, the monarchy underestimated public grief at the death of Diana, Princess of Wales. Last year, the BBC overestimated it following the death of the Duke of Edinburgh when it received more than 100,000 complaints for interrupting its schedules with extended coverage.

Many of those paying their respects on Friday had not even predicted their own reaction to the Queen’s death. They had not planned to come to central London, but had ended up there, swept along by their need to mark the moment, to be reassured that others felt as they did. The written messages overwhelmingly expressed not so much sadness as thanks for Elizabeth II’s service. “I was born in 1952, you had been there all my life,” said one note.

It was the Queen’s steadfastness, continuing royal duties until the day before her death, that most resonated with her subjects. “There’s been times this week when I’ve had toothache and thought I don’t want to get up. Can you imagine the amount of times she felt ‘I don’t want to do that’? Without fail, she showed up,” said Jane Greig, a business analyst from Essex.

Scarcely believable that on the same spot 97 days earlier crowds had been celebrating the Queen’s platinum jubilee, with performances from Elton John and Diana Ross, as well as a charming video of the monarch and Paddington Bear.

By mid-afternoon, the mourning had turned to well-wishing, with the arrival of King Charles III’s motorcade. At first, there were just a few shouts of “God Save the King”. Then the palace lowered its Union flag at half mast and raised a royal standard, indicating the monarch’s presence. That won applause. England cricketers mingled, their Test match against South Africa postponed out of respect.

The pictures that will endure are those of King Charles greeting members of the public as he has done hundreds, if not thousands, of times before, but never as the monarch. “My mother would have been so touched,” he told one well-wisher. “Thanks for coming.” He clearly felt as humbled as many in the crowd. 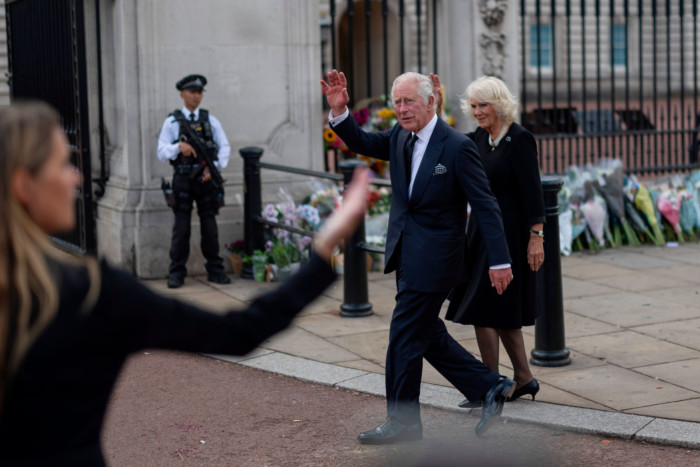 From abroad, Britain’s relationship with monarchy can seem cringingly deferential. Up close, it feels less cultish and more logical. The monarchy provides a link to the past and the future. It encapsulates how individuals come and go, but the collective remains.

Of course, this being 2022 and a moment of political and economic malaise in Britain, there was anxiety too. “It’s the end of a chapter — an old-fashioned England that is ceasing to exist,” said Charlie Barker, a tiler from Hertfordshire. “It’s a me, me, me culture now . . . we’re becoming a society where cheap will do.”

Organisations, meanwhile, grappled with the meaning of national mourning. Strikes and climate protests were called off. The BBC cancelled the Last Night of the Proms as a “mark of respect”. The Bank of England postponed its next interest rate decision. The Premier League and the English Football Association, whose president is Prince William, called off the weekend’s football, down to grassroots level. That move raised some eyebrows given that other sports, including cricket, will resume. Two betting chains closed their shops. It is unclear whether this is what Queen Elizabeth, a horseracing enthusiast, would have wanted. 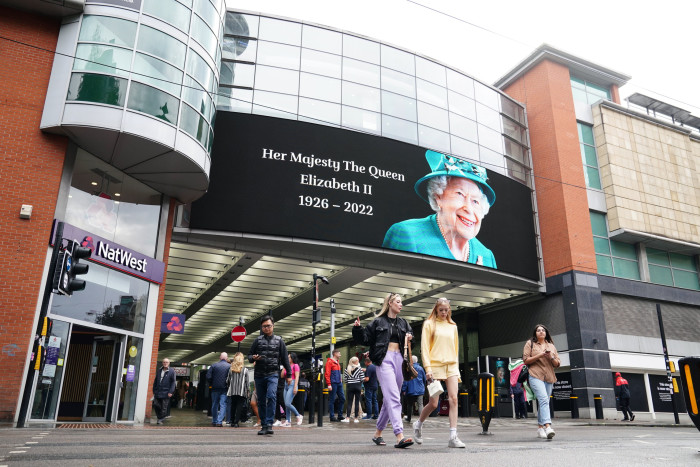 Across much of Britain, life simply continued as normal, punctuated by reminders. In Manchester, under a gunmetal grey sky, midday shoppers and dog walkers dodged the downpours to the soundtrack of a muffled, hour-long bell toll. Protocol issued to churches had dictated exactly how and when the bells were allowed to ring, according to what time of day the sovereign had breathed her last.

Around every corner of the city centre, the Queen’s portrait — sometimes slightly stern, sometimes smiling — had appeared. In Manchester cathedral, books of condolence were filled with messages from local families, schools and tourists from Ireland to New Zealand. “You’ve been the nation’s glue for generations,” wrote one well-wisher. “We will feel unstuck without you.”

A few hundred yards away in St Ann’s Square, a group of police officers surveyed the bunches of sunflowers and roses placed at the foot of the statue to Richard Cobden, one of the city’s most famed Victorian industrialists and statesmen. “She was the nation’s granny,” remarked a man standing with them, to which one replied: “Well, she’s all we’ve ever known, in’t she.”

Queen Elizabeth II met countless people during her 70 year reign. Did she ever come to your workplace or community? Please share your story via a short form Email your pictures to [email protected]