Following a historic number of hires in 2021, Transport for London is set to launch e-bikes as part of the Santander Cycles scheme to support the scheme’s continued success and financial sustainability.

Transport for London (TfL) and Santander have announced that e-bikes will be introduced to London’s record-breaking Santander Cycles scheme from 12 September 2022.

In July 2022, the scheme recorded its busiest month in its history, with more than 1.3 million hires across the month. To support the scheme’s continued success and financial sustainability, TfL and Santander are introducing 500 e-bikes to its fleet, which use an electric motor to assist riders as they pedal. The bikes are being introduced as part of a programme of work to modernise the cycle hire scheme, with funding agreed for the programme in 2020.

The new e-bikes will be distributed across key central London locations and will enable even more Londoners to enjoy the benefits that cycling can bring, from improved health to cleaner air. The new bikes will help to break down the barriers that stop some people from cycling, including fitness, age and journey length. E-bikes will be able to be docked at any of the scheme’s 800 docking stations, giving customers an easy and sustainable way of travelling across a large area of central and inner London.

TfL will also be making changes to the Santander Cycles fare tariff from 12 September 2022, to support the introduction of e-bikes and to secure continued investment in cycle hire. The changes will make charges for access more flexible and easier to understand for everyone.

Feedback from customers has shown that the current tariff structure, which charges an annual membership fee or a daily access fee of £2, plus additional charges for rides longer than 30 minutes, is complex and inflexible. The changes, which are the first since 2013, include:

The £1.65 new flat rate for customers who are not Santander Cycles members matches the price of a bus fare, meaning that Santander Cycles will continue to offer one of the best value ways to get around London. 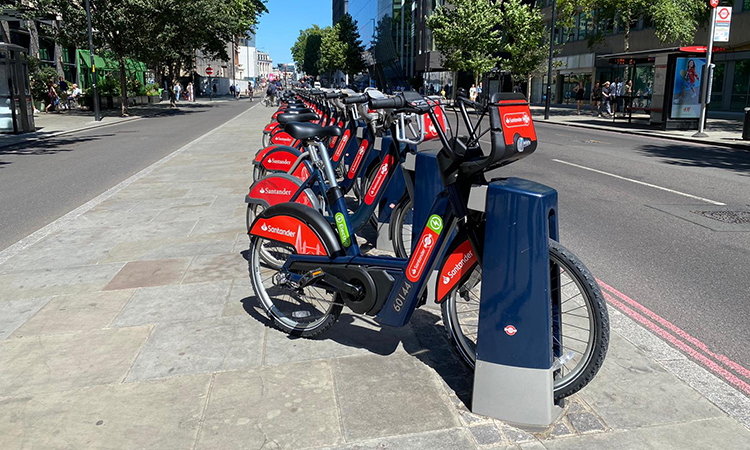 The scheme has continued to break records for 11 months in a row, with every month from September 2021 to July 2022 achieving the highest number of hires for that month since the scheme began. The scheme also experienced a historic year in 2021, with a record-breaking number of hires across the year, as well as during several different months. 10.9 million hires took place in 2021, surpassing the previous best target set in 2018 by 371,000 hires. More than one million individual customers used the cycle hire scheme in 2021, marking the first time that this milestone has been reached in a calendar year. 178,000 new members joined the scheme in 2021, a seven per cent increase on 2020 and more than double that of any year prior to 2020.

The Mayor of London, Sadiq Khan, said: “I am delighted to be launching our first ever e-bikes for hire. Another first for London, hot on the heels of another record-breaking month for Santander Cycles, which saw an incredible 1.3 million journeys in July. It will be great to see these new e-bikes on London’s streets soon.”

“I’m determined to continue building a cleaner, greener London for everyone, and this includes making cycling as accessible as possible. The new Santander Cycles e-bikes will play an important role in helping to break down some of the barriers that stop people from getting on a bike, including fitness, age and length of journey,” Khan added.

David Eddington, Transport for London’s Head of Cycle Hire, said: “Santander Cycles is a vital part of London’s transport system and is more popular than ever, with the scheme seeing 11 record-breaking months in a row. We want to make sure that the scheme continues to be one of the easiest and most sustainable ways of travelling in the capital. The new bikes, alongside our simpler new tariff, will ensure that the scheme can build on this success and be financially sustainable, playing a full role in a green and healthy future for London.”