By Arthur Parashar For Mailonline

Homeowners have been left outraged after being informed by their council that food bins will not be collected for more than a month despite the next heatwave looming.

Labour-run Waltham Forest Council informed residents on social media that both food and garden waste bins will not be collected from August 15 until September 12.

Furious homeowners in the north-east London borough have fired back, highlighting that their ‘rotting’ food will be left uncollected while the UK is gripped by another heatwave.

Conservative deputy leader of Waltham Forest, Afzal Akram told MailOnline that he and his fellow party members were ‘flabbergasted’ when they learnt of the suspension via Twitter.

‘We are flabbergasted by this decision being made and by the way it has been communicated,’ he said.

‘We as councillors only heard about it once the council put it out on social media. It’s one of those blue sky thinking moments that you think of something and straight away you should throw it in the bin.

‘But for them to go and implement it is ridiculous. We are in a heatwave and they expect residents to leave food lying their for month – the stench, the stink is going to be unbelievable.’

The council’s ‘temporary’ measure has been introduced after it highlighted that less garden waste has had to be collected given the lack of rainfall in the UK this summer. It will instead focus on other services to reduce unnecessary journeys. 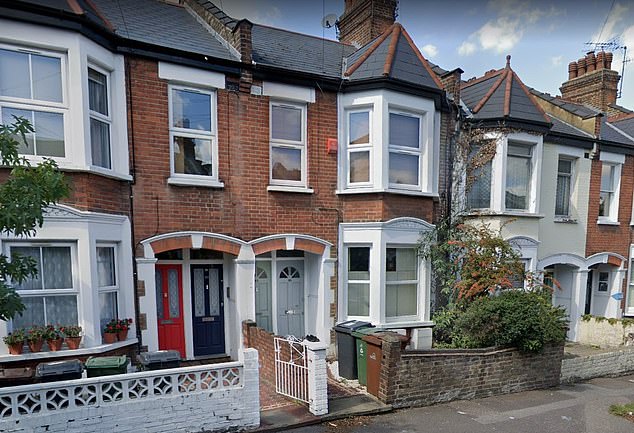 The decision has received severe backlash from locals and councillors alike. Pictured: A street in Waltham Forest 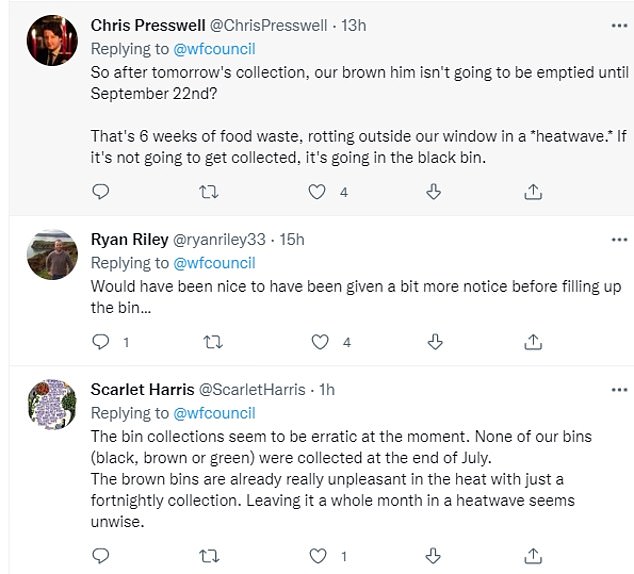 Waltham Forest Conservatives leader Emma Best also told MailOnline the decision was ‘completely ridiculous’, adding: ‘Bins are already full of festering food with residents having no warning of this decision. The state of these bins in flat blocks will be especially grim in a month’s time.’

She also hit out at the council who declared a ‘climate emergency’ in 2019. She said: ‘Waltham Forest Labour have managed to be regulars in Private Eye’s rotten boroughs list but this decision will bring a whole new literal meaning to that title. They must reverse this decision now.’

Cllr Akram, who revealed that a formal protest is being written to the council, also fears that the years of education into recycling will be halted by this ‘stupid’ decision that will see residents go back to putting food waste in black bins.

The council has told homeowners to dispose of any garden and food waste in brown bins until collection resumes.

But residents have hit back at the council’s announcement with serious concerns about the heatwave and the danger of flies and other pests infesting their brown bins.

One user simply said: ‘Whyyy?! Literally in a heatwave…’.

Meanwhile another vented their frustration at the lack of notice given. They said: ‘And a little more notice wouldn’t have gone amiss. My brown bin is already full of all that garden waste that you seem to think is nonexistent, as well as some food waste which will now rot for 5 weeks’.

Another Waltham Forest resident highlighted that following the last brown bin collection tomorrow, it will actually be six weeks until the food waste is next collected. 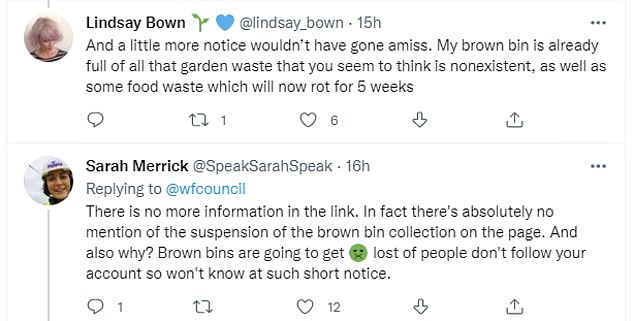 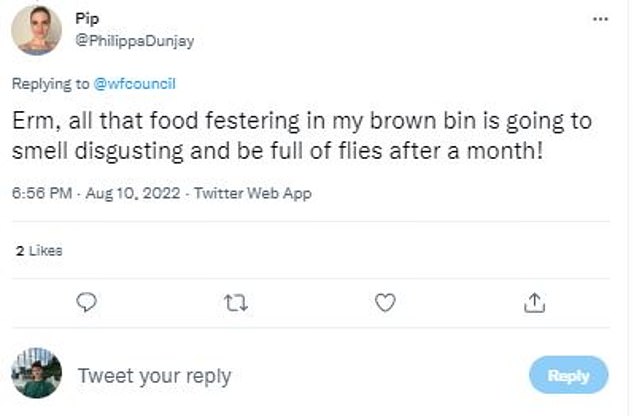 Some residents of Waltham Forest pointed out the lack of notice they were given as well as limited information on the website. Meanwhile others have serious concerns about rotting food being targeted by flies and rats during the heatwave which will see temperatures hit 37C (99F)

The Met Office has announced an amber extreme heat warning as temperatures are set to soar to 37C (99F) in some parts of the UK over the next four days.

Although temperatures are not expected to be as high as the previous July heatwave, it is set to last longer.

This is what has left people in Waltham Forest outraged. One user said: ‘So in the hottest month, we’ll be left with rotting food waste attracting rats and other pests, that makes sense’.

While another said: ‘Erm, all that food festering in my brown big is going to smell disgusting and be full of flies after a month!’

Britain in the grips of another heatwave: ‘Extreme heat’ warning comes into force with country set to swelter in FOUR DAYS of at least 33C with ‘exceptional risk’ of more wildfires and the nation facing drought

Wildfires threaten to sweep across tinderbox Britain and pose an ‘exceptional risk’ to homes, as an ‘Extreme Heat’ warning comes into force from today with temperatures set to reach at least 33C (91F) in London.

A double heat warning has been put in place by experts amid increasing heatwave temperatures that are set to soar, with Manchester set to reach 31C (88F), while Portsmouth will reach a balmy 29C (84F) – albeit not quite as high as the record-breaking 40.3C blast experienced last month.

The Met Office has also raised its Fire Severity Index to exceptional – the highest level – today for much of southern England, and Wales alongside an amber, as the mercury is forecast to climb to ‘lethally hot’ temperatures of 36C (97F) this weekend. The warning system also been at its second highest level of alert for seven weeks, which is the longest stretch since 1976. 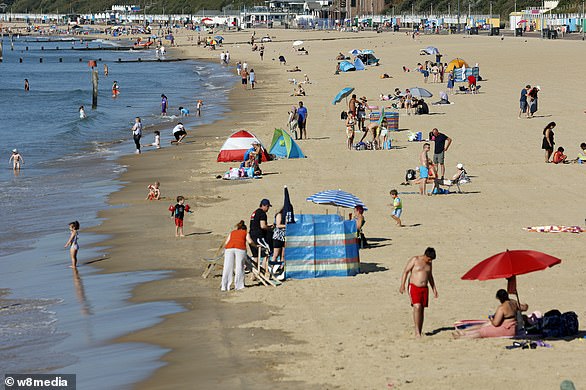 Pictured: Britons arrive at Bournemouth beach early to secure their spot before crowds arrive as the day progresses

Police are looking to step up patrols for wildfires in high risk areas amid reports that tomorrow could see an official drought in the South announced by the Government.

It comes as a former NHS doctor warned the health service is ‘on the brink of collapse’ as it expects an increase in admissions as temperatures continue to increase across the country.

The heat is likely to affect health, transport and working conditions, meteorologists said, as water companies are being urged to protect essential supplies heading into a ‘likely very dry autumn’. National Highways have also urged Britons to be ‘prepared’ with bottles of water before setting out amid more train strikes scheduled this weekend. 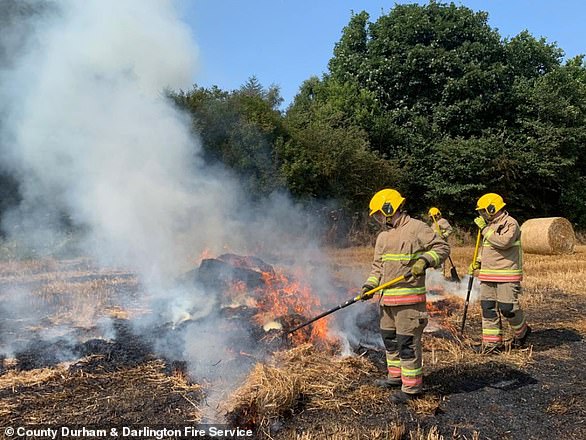 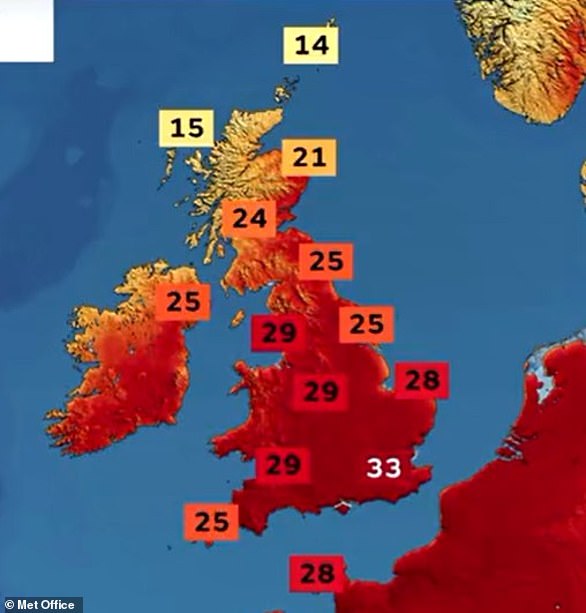 Wildfires threaten to sweep across the country this weekend posing an ‘exceptional risk’ to homes, as an ‘Extreme Heat’ warning comes into force from today with temperatures set to reach at least 33C (91F) in London