Residents living in flats in a property where Olivia Newton-John bought her first London home – before she found global stardom – have called for a blue plaque on the building to commemorate her life.

The singer, who died at the age of 73 on Sunday, invested in the humble one-bed apartment almost 50 years ago.

The modest one-bedroomed property in upmarket West Hampstead is a far cry from the £4m luxury ranch in Santa Ynez, Southern California where the star spent her final days with her husband John Easterling, surrounded by family and friends before her death this week.

Deeds show that on March 19, 1973, Newton-John, then aged just 24, spent £19,500 on the second-floor flat with its own small roof terrace just off West Hampstead’s main thoroughfare West End Lane.

Olivia’s Hampstead bolt-hole: The one-bedroom apartment on Dennington Park Road in North London is worth around £600,000 today, but was bought by the then aspiring star for just £19,500 in 1973

A resident at the property checked the original deeds to confirm that Olivia, who died on Sunday at her ranch in California after a 30-year battle with breast cancer, had owned it – and found her name barely legible on the document 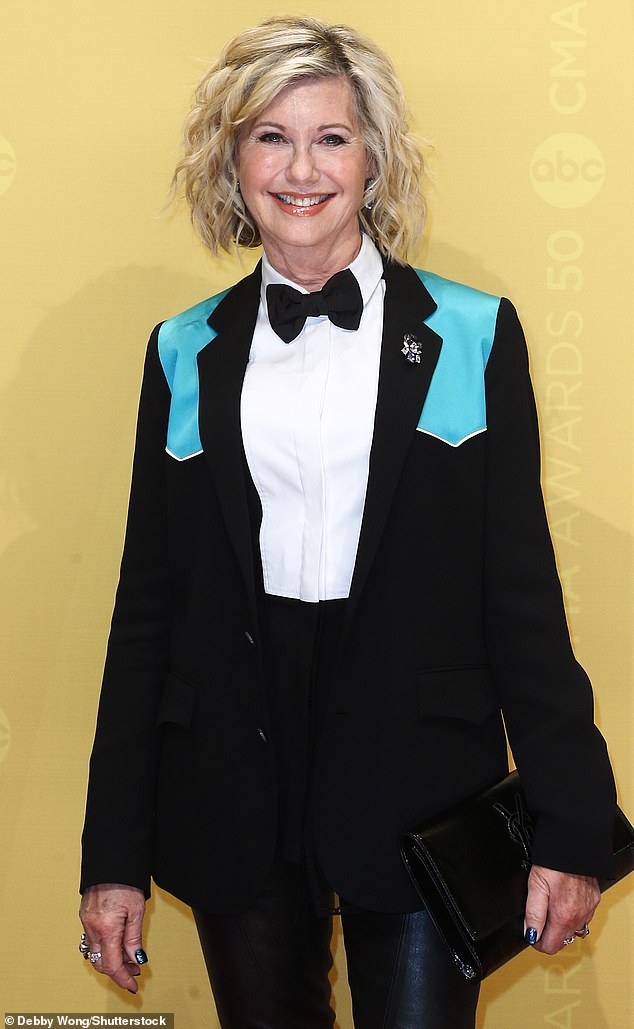 The adored British born, Australian-raised star had lived in Hampstead with her mother Irene – in a £9-a-week flat in Perons Court, Hampstead – as she tried to launch her career (Pictured in 2016 in Nashville)

A copy of the title deeds and 99-year lease for the property is kept in storage at the Land Registry along with millions of others. The flat’s value, in Dennington Park Road, now rented out, is estimated at around £600,000 these days.

One current occupier of the five other flats in the same building said he was intrigued to notice that groups of people on walking tours would stop outside in the street and gaze up at the second floor.

‘I popped outside and asked them why they were there,’ he said, ‘and they told me Olivia Newton-John used to live there. I went back and looked at the property deeds, and there was her name, barely legible.

‘I think there should be a blue plaque marking this as the first flat she owned in London, which I’m sure it must be.’

In 1973 Olivia’s fledgling career was going well, but she was still nowhere near the superstar status she would enjoy with her starring role in Grease, playing Sandy opposite John Travolta’s Danny, five years later. 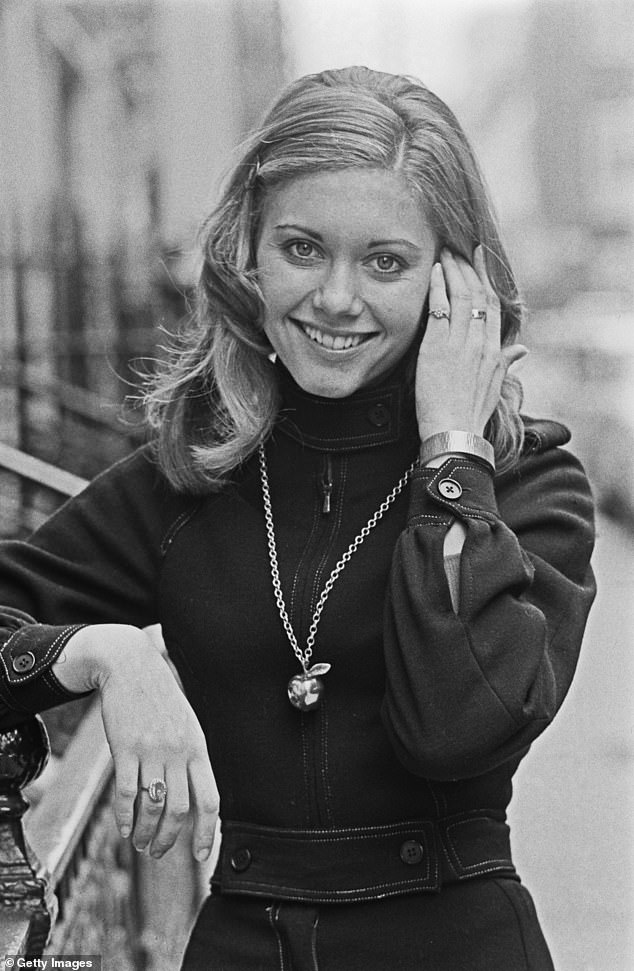 The singer pictured in  London in 1973, several years before her big break in the high school cult film Grease 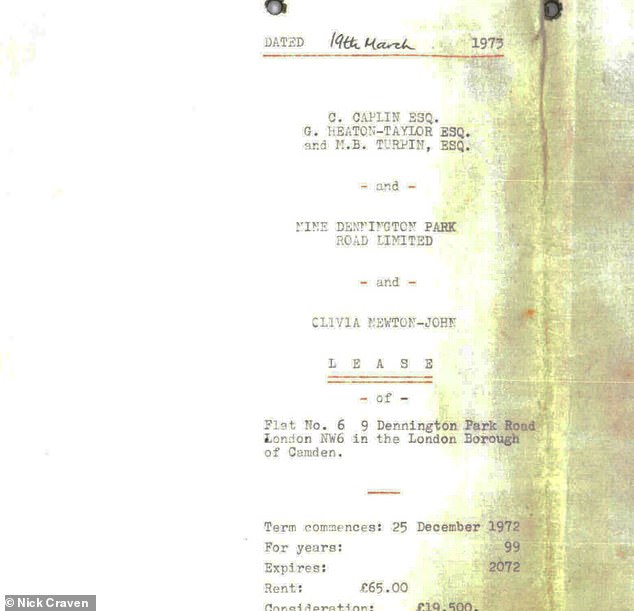 A resident living in one of the five other flats in the same building called for a blue plaque to commemorate the Grease star’s time in the area. Pictured: a copy of the original deeds

Born in England in 1948, Olivia was aged just five when her parents emigrated to Melbourne, and she said in later life that she always regarded herself as Australian.

Nevertheless she returned to London in 1966 after winning the plane ticket and (Aus) $300 in a talent competition called Sing, Sing, Sing the previous year while still at school.

By then her parents, Brin and Irene, had divorced and Olivia’s mother accompanied her daughter to London for her crack at the big time.

Online sources suggest Dennington Park Road was Olivia’s first home in London, as early as 1965, but our research shows she lived in a succession of other rented properties before buying the flat.

Initially Olivia and mum Irene lived in a £9-a-week flat in Perons Court, Hampstead and struggled to get by as Olivia worked the club circuit, later forming a duo for a spell with a friend from Down Under, Pat Carroll.

Olivia’s debut solo single in 1966, Till You Say You’ll Be Mine, written by US songwriter Jackie DeShannon, was recorded at Decca Studios and duly released by the label as part of the prize for winning the Australian television talent competition.

The one-off single was a flop, and it was not until 1971 that Olivia’s first big break came with a cover of Bob Dylan’s If Not For You. 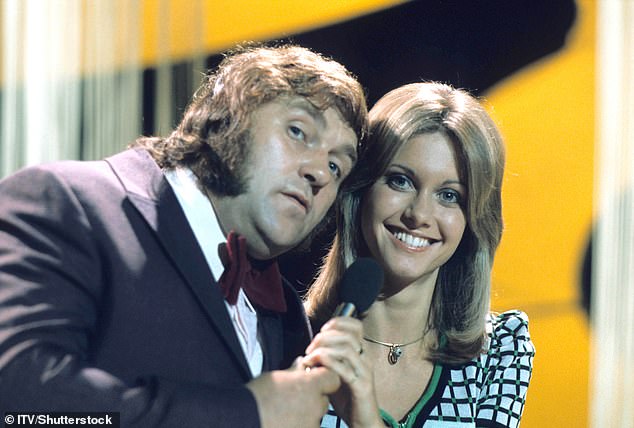 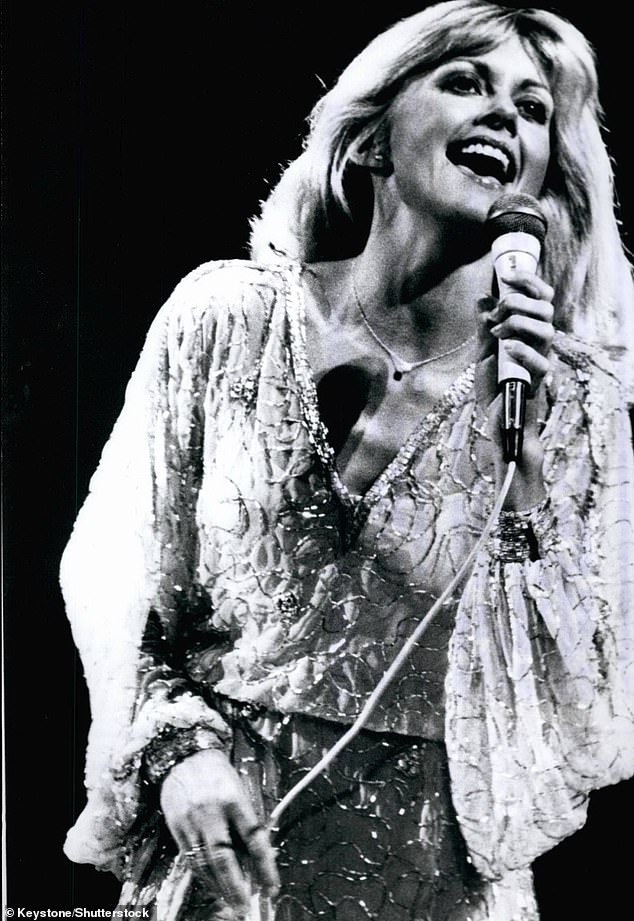 The singer on the cusp of stardom performing in Hamburg in 1973, the same year she got on the UK property ladder

For several years she was in a relationship with The Shadows’ Bruce Welch, living at his flat in London, after working as a support act for the group and Cliff Richard on stage and TV.

Hits followed for Olivia with the country ballad Banks of the Ohio and Let Me be There, both of which did well in the United States.

In 1974 she was chosen to sing the UK’s entry at Eurovision, Long Live Love, coming joint fourth to Abba’s massive debut hit, Waterloo for Sweden.

Dame Olivia, as she would become in the 2020 New Year’s Honours, became a prominent campaigner for breast cancer research, after being given the first of three cancer diagnoses in 1992.

Following her initial battle with the disease, she had a partial mastectomy and reconstruction. Subsequent diagnoses followed in 2013 and 2018, when she told fans she was treating the illness ‘naturally’ and was using cannabis oil for the pain.