About 50 properties have been damaged and four people rescued after a 36in water main burst in north London.

Emergency services were called to the scene in Islington just after 7am on Monday after a 4ft deep flood washed through Hornsey Road.

Ten fire engines and about 70 firefighters were called to the scene, with crews assisting two adults and two children to safety after they were unable to leave their flat, LFB said.

The two adults and two children were not injured.

Fire crews have now started to withdraw from the scene but multiple road closures are expected to be in place “for some time” as repairs are under way, the brigade added.

“There is severe congestion in the area and multiple road closures are expected to be in place for some time whilst our partners work to carry out repairs. People are urged to avoid the area. 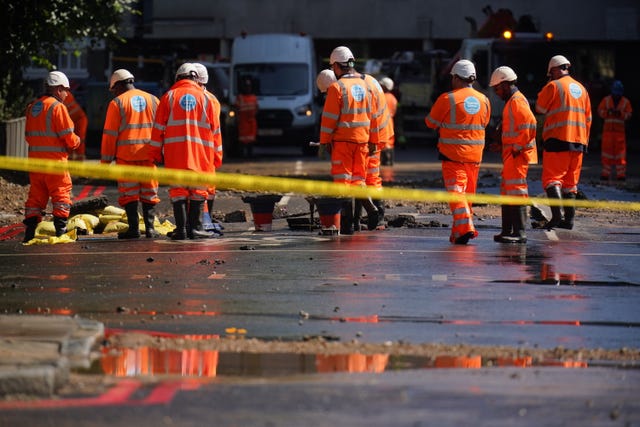 “Firefighters used flood barriers to divert water and assisted two adults and two children to safety. There were no reports of any injuries.

“If you are affected by flood water, if possible (and without putting yourself at risk) move to a higher level.”

Thames Water, which supplies water to the area, remains at the scene.

A spokesperson for the water company said: “We’re sorry to customers who experienced lower pressure than normal or no water today due to a burst pipe and the disruption this has caused. 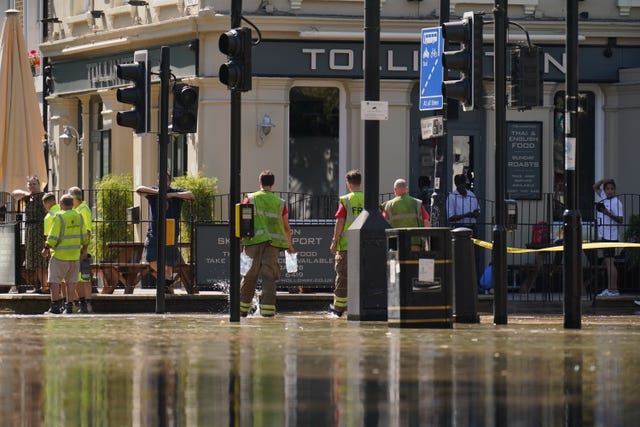 The scene outside the Tollington Arms in Holloway, north London, after a 36in water main burst, causing flooding up to four feet deep (Jonathan Brady/PA)

“Our engineers were quickly on the scene this morning and stopped the flow of water.

“We’ve been using temporary pumps to restore water pressure levels and most customers should be back in supply and have their water pressure returned to normal.

“We’re starting the repair and our customer teams are supporting those affected by the burst.

“We’ve also been pro-actively contacting everyone in the affected area who has pre-registered with us as having special requirements, such as being medically reliant on water, so we can make sure we give them the help and support they need.”

Chris Dodsworth, a civil servant who lives in the area, described the situation as “quite stressful”.

He told the PA news agency: “I woke up around 7.30 and realised I could hear the sound of running water outside which was obviously strange, especially given the weather recently.

“My first thought was that it had rained overnight but then I obviously glanced out the window and just saw that the whole street and connecting roads were utterly submerged.

“It’s so strange to be around so much water (especially in this time of drought)… what a day of contrast.”

Liz Clutterbuck, 41, a vicar at Emmanuel Church, told PA: “The flood stretches all the way to Arthur Road. The houses between Arthur Road and Tollington Way have water above the bottom of their front doors.

“The Sobell (leisure centre) is flooded by several feet – could see it at least two feet high on the external exits in the car park. Water still seemed to be flowing fast an hour ago.”

Reverend Clutterbuck added that the church is open for residents to use if they need to.

A member of staff for the Tollington Arms, in Hornsey Road, said: “It happened about 7am and within minutes there was flooding like a tsunami.

“The fire service were down very quickly and we hope, along with Thames Water, they can get things back to normal as quickly as possible.”

A spokeswoman for GLL, the charitable social enterprise that operates the Sobell on behalf of Islington Council, said the lower ground floor of the building had flooded, prompting staff and customers to be evacuated and closed for the day.