Future proofed electricity infrastructure will not be the London Power Tunnels’ only legacy. The project is also setting new standards with its delivery model and equipment.

Meeting London’s future electricity demands and replacing technology that had reached the end of its life are the reasons behind National Grid’s current London Power Tunnels project.

The electricity distribution company decided to drastically change the capital’s electricity infrastructure a decade ago and the latest phase of work is now underway in south London.

Instead of continuing to have the cables buried close to the surface, it decided to install them in deep tunnels. The main reason for this is that it makes accessing cables for inspection and maintenance easier, as no excavation work is required to enable this work.

The cable technology is also different. Unlike older cables, the new cross linked polyethylene cables do not require an oil based system to keep them cool.

While the second phase of the work is a continuation, National Grid looked at what had changed in the construction market. This has led to some key changes in approach. The end result will be similar – new tunnels and substations – but the way the project is being delivered is very different and new technology is being used for part of the tunnel lining construction.

Construction of the £1bn second phase started in spring 2020, after Hochtief-Murphy Joint Venture (HMJV) was awarded the £380M tunnelling and shaft work contract in late 2019. Aecom is lead designer.

The latest phase involves construction of a 32.5km long network of 3m diameter tunnels between Wimbledon and Crayford in south east London. As part of the project, the new Bengeworth Road substation in Lambeth is also being built and existing substations are being upgraded.

The decision to house the cables further underground in tunnels has meant that the optimal cable route connecting the substations differs from the existing one.

HMJV project director Santiago Daniele explains: “The existing oil filled cable circuits are buried in the ground and are largely located within the highway.

The tunnels will be 30m to 50m below ground level and will have minimum design life of 120 years.

For the current phase of the project, National Grid opted for a different delivery model to the one previously used. Instead of the traditional transactional agreements with the supply chain, it chose to adopt the Project 13 approach.

National Grid project director Gareth Burden says that when the National Grid’s team was looking into the procurement process for this project, they found that through the transactional approach the top 20 contractors were making losses when depreciation of assets is taken into account.

“That’s the definition of a broken market,” he emphasises.

This was one reason that the company chose the Project 13 approach. Another was the desire for a strong focus on collaboration and outcomes.

Project 13 is based on the concept of an enterprise rather than that of a project with a series of transactional agreements with the supply chain.

The enterprise comprises the client, advisor, integrator and suppliers, who are incentivised to deliver outcomes through collaboration.

The concept for this approach was first set out in ICE’s From Transactions to Enterprises report and the Institution played a key role in its development.

Project 13’s principles are applied through the X 12 collaboration clause. “Every NEC contract requires client and contractor to collaborate and de-risk, have risk mitigation meetings and work together for the common goal,” explains Burton.

“The X 12 basically says: ‘These other people are also coming along and you are expected to work collaboratively with them, share designs, share a common data environment, have conversations about clash detection, discuss temporary works and share ideas and best practices’,” Burden explains.

In all enterprise partners’ contracts there is the “schedule of partners” providing incentives and measures to achieve collaboration. The measures are in the form of key performance indicators (KPIs). There are incentives for each partner and others for the entire enterprise.

Each has a set of KPIs with several attributes. Each contractor has to make calculations about the attributes every month and submit them to National Grid for review. Rewards are given or penalties are imposed depending on performance.

The incentives for each contractor are linked to specific milestones set by National Grid.

Those at enterprise level are aligned with the key result areas. 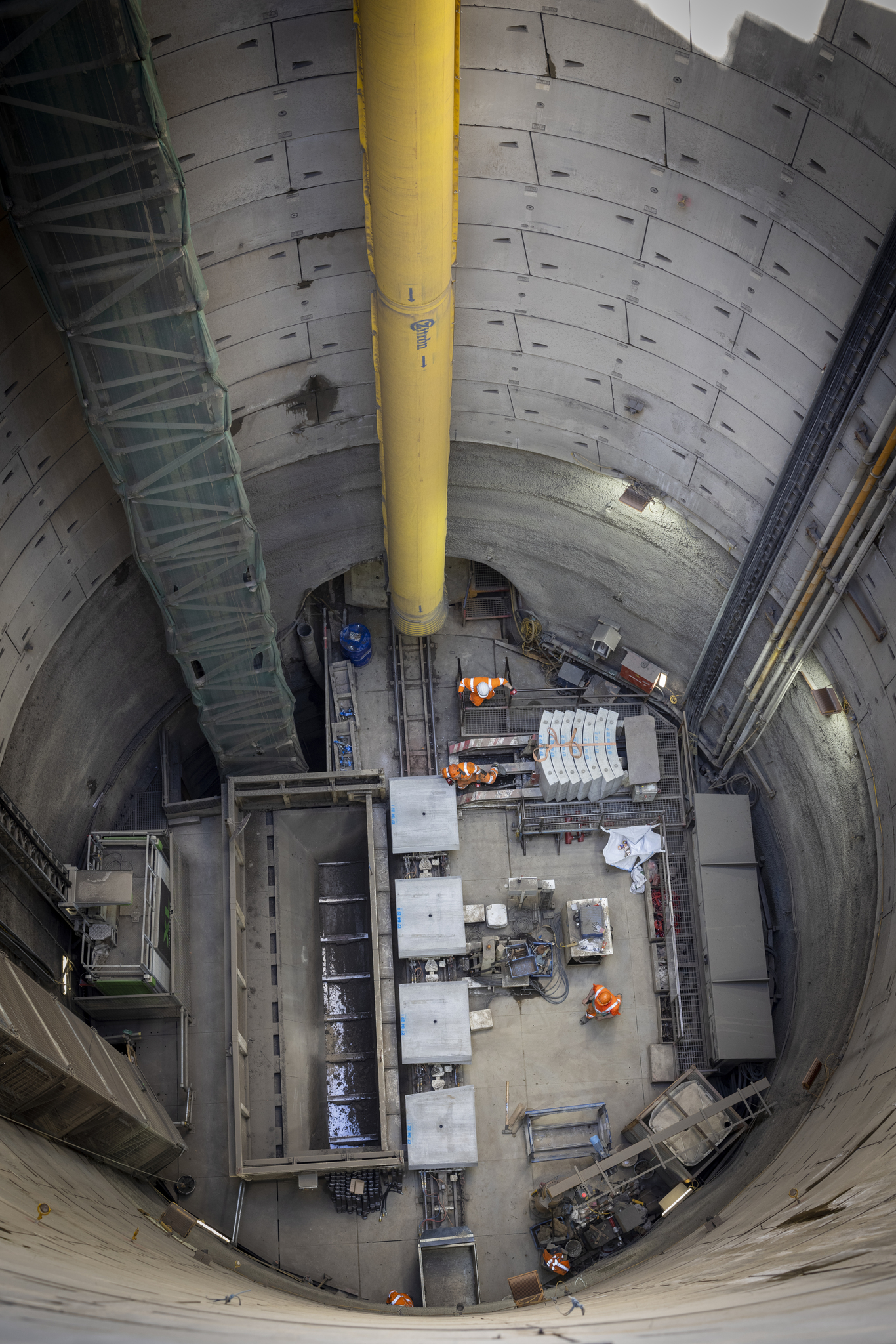 “If one of the partners is not collaborating or not performing well, all the other partners are not going to get access to those incentives,” Daniele explains.

“These are necessary tools to promote the right behaviours and collaboration.”

The partners share a number of digital tools and platforms and hold regular meetings. Daniele says that Project 13 is the right approach for projects with several parties working together.

“It has certainly helped us collectively to get through challenging times without ending up with claims or the usual commercial arguments.

“This approach gave us more flexibility to find solutions and made sure we could keep going and meet all the milestones.”

Collaboration on the London Power Tunnels projects is not only to do with project delivery, it will be used to test a technology that could revolutionise tunnel lining construction.

Three of the four earth pressure balance TBMs being used for the project’s five drives were procured by HMJV from German TBM manufacturer Herrenknecht. The fourth is a refurbished Lovat open mode TBM supplied by Murphy Plant.

Discussions between Herrenknecht, National Grid and HMJV, led to the parties agreeing to collaborate on the development of tunnel lining installation technology called the Automated Ringbuild System.

“We said we will collectively fund some of this technology and then as a project we would provide the opportunity to try the system,” Daniele says.

The 11.2km drive between New Cross substation and Kidbrooke in south east London is the project’s longest. It was selected as the test bed for the system.

Currently ring building involves a construction team member operating a lifting device at the back of the TBM to lift and position tunnel lining segments. The Automated Ringbuild System is being developed to enable automated segment positioning.

This is done with a computer which controls the ring building equipment –  the TBM assemblies erector, segment feeder and thrust cylinders. The system will use cameras, sensors and artificial intelligence.

The next stage involved the installation of a camera system to record 3D measurement data under real conditions.

Once the functionality of the systems and sensors was confirmed, the ability of the technology to pick up segments automatically was tested.

The final stage of the trial takes place later this year with the automated system in full operation. According to the original plan, 50 rings will be installed in automatic mode.

Burden says that improved safety is the most important benefit of automated system, as fewer people will have to work in the hazardous, cramped conditions of the underground sites.

Tunnelling has been progressing well, despite the challenges posed by ground conditions (see box). Several milestones have been reached in recent months.

More than 50% of the tunnelling work was completed by 16 June, while a few days later the first of five drives undertaken by the TBM broke through in Eltham, south east London. As NCE went to press, a second breakthrough at the Wimbledon site was imminent.

The overall scheme is due to be completed by October 2026.

“We have ground condition challenges pretty much in every tunnel drive,” says HMJV project director Santiago Daniele. Unlike the project’s first phase where the TBMs had to drive through London Clay – a good tunnelling medium – this phase’s construction team has to deal with much more variable ground conditions.

“One day you are tunnelling in Chalk, the next day in sand and the day after in Lambeth Group [a mixture of stiff and hard clays, silts, sands and gravel],” says Daniele.

The variable ground conditions mean that HMJV has to “adjust the parameters of the TBM, the conditioners and the conveyor belts all the time, otherwise the system starts struggling,” he says.

In late March, ground contamination was found in the drive connecting New Cross substation and Kidbrooke in south east London.

“The contaminants encountered in Drive 3 were hydrocarbon based due to the historic industrial nature of the overlaying land. These contaminants are dangerous to the tunnellers due to implications of encountering them in a confined working environment,” Daniele explains.

As a result work on this drive had to stop, while the contractor increased monitoring and introduced measures to ensure work could continue safely. Since mid-June, no further contaminants have been detected and the tunnelling works have resumed.