Arsenal manager Mikel Arteta had the Liverpool anthem, ‘You’ll Never Walk Alone’, blasted across the club’s training pitches in north London, in an effort to prepare his players for a visit to Anfield.

The bizarre preparation is just one of the off-the-wall methods Arteta has employed to focus the minds of his young squad before crunch fixtures.

In other unconventional moves, the Gunners’ manager has asked players to hold hands to feel the energy of their team mates and brought in the club photographer to give the team talk.

EXCLUSIVE CLIP
The atmosphere at Anfield can be intense 🔥

The novel approaches have been revealed in the Amazon Prime, All of Nothing docu-series, which will start streaming on Thursday.

The Spaniard is not scared to try something new and even admits himself that he has some ‘crazy ideas’. But some of them have delivered results.

Arsenal travelled to Liverpool on November 20, last year, having survived a disastrous start to the season and off the back of an eight-game unbeaten run.

In the documentary, Arteta is filmed telling his players the trip to Anfield will be critical in the outcome of their campaign. The Arsenal squad last term was the youngest in the Premier League and a number of the players had yet to experience the cauldron that is Anfield. 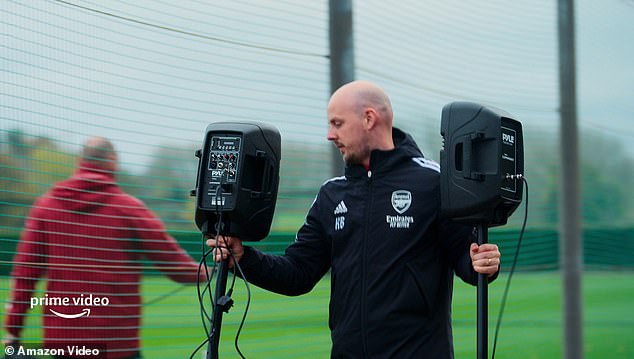 Arteta has many times, and revealed he has struggled there.

‘The most important thing with Anfield it is that emotionally you are in top condition to compete there,’ he told the team as they gathered at the London Colney training base in the week before the match.

‘You have to know what is Anfield and it is, believe me, very different to any ground I have experienced in the Premier League.’

Arteta clearly has huge respect for the Liverpool fanbase and the impact they have on opponents. A former Gunners’ and Everton player, Arteta knows what he is talking about. He won at Anfield twice with Arsenal, most recently a 2-0 victory in 2012, and he recalls that the following season he fancied more of the same. 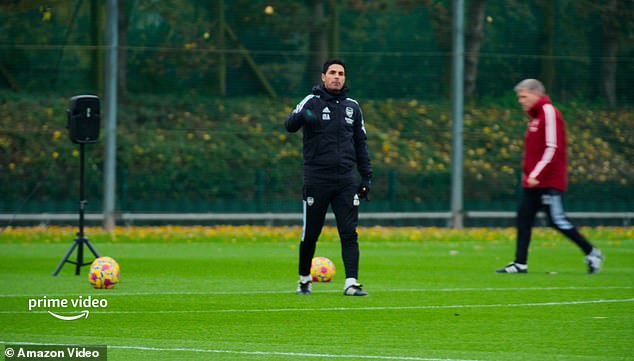 However, in a typically candid passage in the intriguing documentary, Arteta admits that his visit to the famous old stadium in February 2014 was a disaster.

The coach tells the Prime Video cameras that as his team capitulated to a 5-1 defeat he suffered ‘pajara’, a Spanish term usually used in cycling to describe a sudden loss of energy suffered by a rider.

‘I had it once at Anfield,’ reveals Arteta, who made 110 Premier League appearances for the north London club.

‘Suddenly I could only see red shirts flying around. The game is passing all over me. I cannot react. People are thinking what is he doing? I cannot do it, emotionally, physically… I cannot cope, everything is going too fast.

‘I only had that feeling in my career once and it was at Anfield.’

So, Arteta was determined to prepare his team for that eventuality. He erected speakers all around the London Colney training pitch in the week before the game in an attempt to recreate the atmosphere. 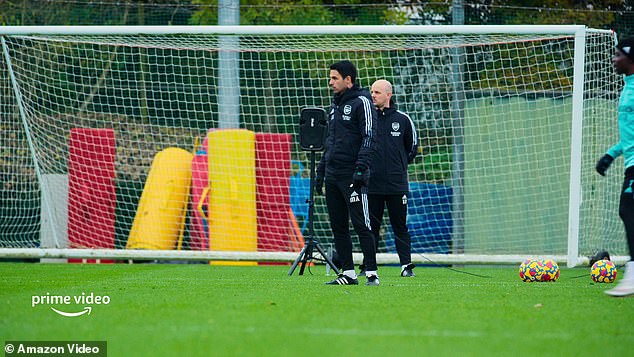 ‘Boys, mentally, we start to play the game now,’ he roared. ‘OK, we are at Anfield.’

And with that, Gerry and the Pacemakers boomed out over the speakers, accompanied by the Kop in full voice.

In a bizarre scene, Arteta marches around the pitch shouting instructions to players, competing with Gerry and the band, who are marching on with hope in their hearts as an assistant twiddles the volume knob.

But Arteta is focused on the challenge.

‘They [the fans] play every ball of the game with the team and you can feel it, he says.

The boss appears pleased with the session. In the dressing room at Anfield, he returned to the theme, revealing the worst night of his career, the night he suffered ‘pajara’. 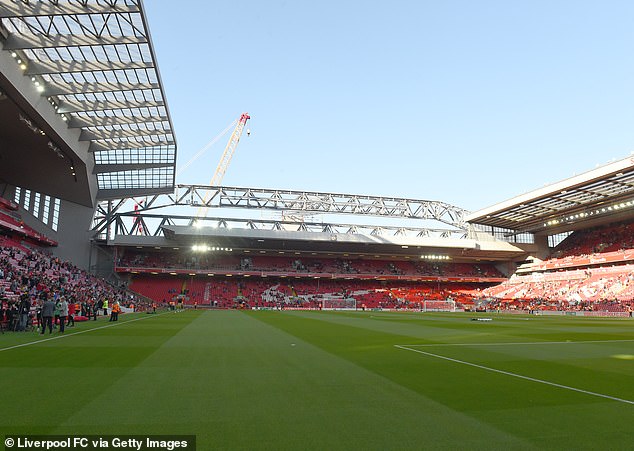 He said: ‘You have to know what Anfield is. It’s very different to any ground I have experienced’

‘When I had that shirt and I was there [sitting in the dressing room]. I came here, for a long time we did not win here, but we won two years in a row here.

‘The next year, I was prepared to come here and I was believing we could win. You know what happened? We start to lose the game. And they were all over us.

‘And you know what I did myself? I hid and I gave up on the pitch. We lost 5-1. I never forget for the rest of my career what I did here.

‘Don’t leave anything on that f****** pitch because I regret it. I let the team down and I let myself down. And I don’t want you to go through that. So go out and play with f****** courage and be ourselves today on that pitch. Do me that favour.’

But nothing could prepare Arteta or the players for what lay ahead. Liverpool employed a physical game, upsetting the young Gunners, with Sadio Mane appearing to catch Takehiro Tomiyasu in the face with an elbow, in an incident that did not lead to a red card.

Arteta exploded in fury on the touchline. He and Jurgen Klopp engaged in a furious argument, shouting and gesticulating and they were separated only by the fourth official. 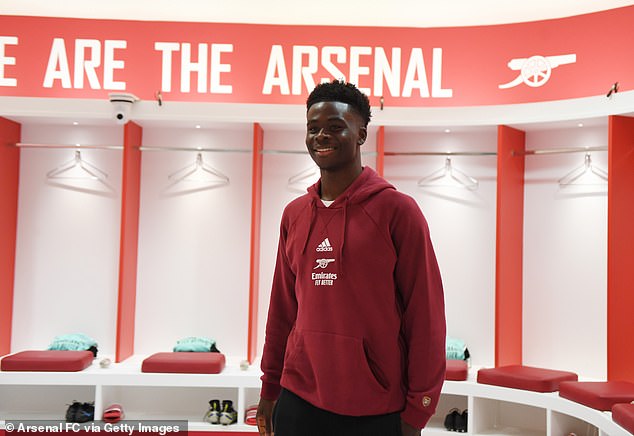 The scene ignited the crowd and Arsenal, after a steady half, buckled and conceded the first goal to Mane six minutes before half-time.

‘Believe til the last minute,’ the coach implored his players at half-time.

Arsenal did not hide, but they were taken apart, slumping to a four-nil defeat with Nuno Tavares making two mistakes that led to Liverpool goals.

While the Liverpool experiment failed, an even more peculiar method employed at Leicester City on October 30 was followed by a 2-0 win.

‘We are going to do something, guys,’ Arteta told his sceptical players, who had been gathered in a wide circle in the spacious dressing room at the King Power Stadium. ‘We are going to get all the energy in this room together.

‘When I tell you I want you to start to do this,’ he said, rubbing his palms quickly together. ‘I want you to close your eyes and I am going to tell you what is going to happen in the game. 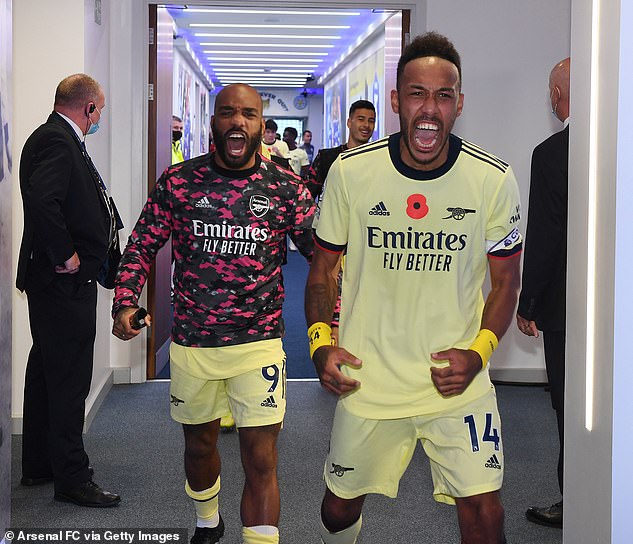 The players started rubbing their hands vigorously, with their eyes closed, while Arteta shouted at them about how ‘aggressive they were going to be in every high press situation’, how they were going regain the ball and play forwards.

Having reminded them of their responsibilities, Arteta ordered: ‘Grab each other’s hands now.’

To their credit, the players went along with it without any obvious sign of dissent, or even peeking, and did not so much as snigger when their manager roared: ‘Feel it in your body, who we are. WHO WE ARE!’

Arsenal were sensational and swept Leicester aside in a convincing 2-0 win, scoring twice in the first 20 minutes.

Although, it will come as a relief to viewers that the players were waiting for their manager when he returned to the dressing room after the game.

‘I wanted to say something, Mikel,’ said one wag, earnestly. ‘Everyone, close your eyes…’

And to huge cheers, the players started rubbing their hands together, while Arteta roared with laughter. Whatever works….