I was born in a house only steps from the shores of the Pacific Ocean, so water has always been my element. When the opportunity to move to a flat on London’s Regent’s Canal came up one year into the pandemic, I jumped at the chance. The vast, wild expanse of the Pacific could not be more different from the mossy murk of this 19th-century urban canal, but somehow being close to water felt like a balm to the chaos around me as the world shut down and haltingly reopened.

I’ve spent countless hours wandering the edge of this 8.6 mile waterway and its 12 locks in the past two years, every day and in every season, noticing new details and, as restrictions eased, getting to know the many places to stop and enjoy a drink, a bite to eat or even a lush, multi-course feast along the way. Walking the full length of the canal without stopping will take about three hours, but taken at a leisurely pace with breaks along the way, it can be made into a full-day excursion.

Here are a few of my favourite places to stop either directly by the canal or a few steps away, listed from east to west, though this is by no means an exhaustive list. It begins on the Thames near the mouth of Limehouse Basin, where the canal starts, and continues north and east through Hackney, Islington, Camden and Primrose Hill.

This Thameside pub near Limehouse Basin boasts more than 400 years of history and wonderful views over the river. In winter it’s a great spot to stop off during a blustery riverside walk, but in summer the best seats are on the lovely little back deck, perched barely above lapping waves at high tide (though you’ll have to get there early to grab a spot on a balmy night).

The watering hole is co-owned by Sir Ian McKellen, the British thespian of Lord of the Rings fame, his former partner Sean Mathias and the Russian-British media magnate Lord (Evgeny) Lebedev, owner of The Independent and Evening Standard, who has so far avoided sanctions in the UK, raising questions about his links to outgoing prime minister Boris Johnson. Still, politics stops at the water’s edge — or at least can be put aside for a moment over a good pint and a glorious view. The pub menu features tasty takes on pub classics like fish and chips and burgers, as well as some more Mediterranean and vegetarian options.

Walking into this freestanding pub in the middle of Mile End Park is like stepping through a portal into another time. A lone survivor of the Blitz in an area where the surrounding buildings were flattened, this East End boozer has been run by the same owners for almost 50 years. It’s a decent place to pick up a daytime pint by the canal, but the real appeal is the weekend jazz nights, bathed in a glow of red lights and led by a band of older musicians, immortalised in the wonderful series The Last of the Crooners by London-based photographer Tom Oldham. This is a vestige of an east London that’s disappearing — a truly special spot. 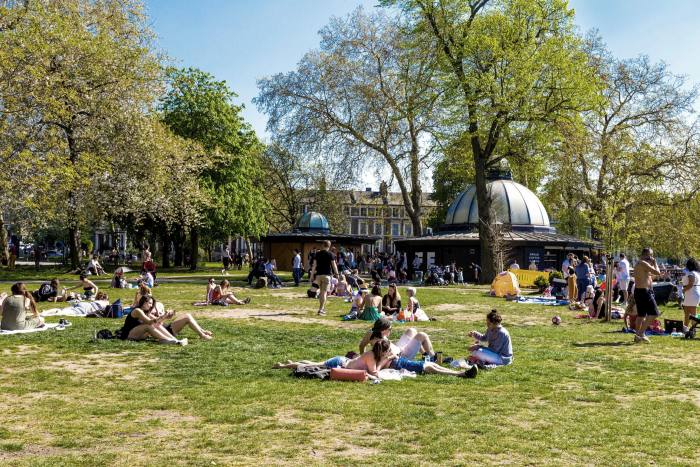 Perched on the boating lake in Victoria Park, this local favourite is rammed with runners, wanderers and dog walkers on weekends, who crowd the lakeside terrace and bench-strewn knoll nearby for brunch, lunch and coffee. The original location of the well-known Pavilion Bakery group, which has outposts around east London and in Cornwall, the café serves top-notch baked goods and delightful Sri Lankan breakfasts, a legacy of owner Rob Green’s previous success with Sri Lankan tea stalls in Borough and nearby Broadway markets. 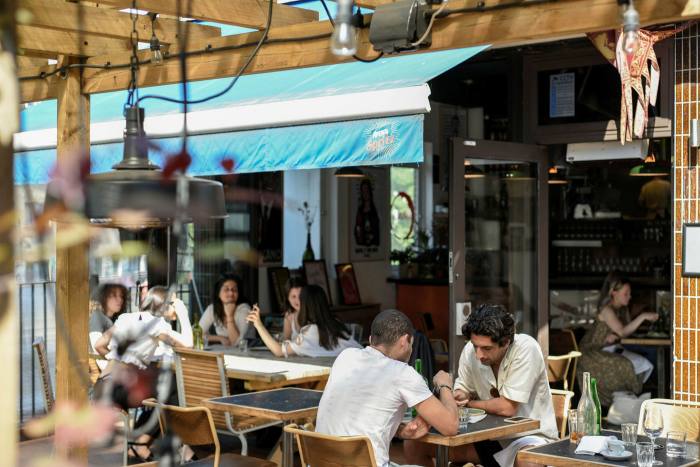 The terrace at Ombra: ‘One of London’s most interesting Italian restaurants’ © Brian Dandridge

I will admit that I have walked by Ombra for years without venturing inside. This has proved an oversight: it turns out this is one of London’s most interesting Italian restaurants. In my defence, the premises are odd, built for retail at the entrance to an enclave of mixed-use warehouses, while the terrace is largely encased in plastic sheeting on a particularly functional stretch of Mare Street. For the less superficial and better informed, the restaurant offers an excellent vantage point over the canal to sip a glass of wine and eat fresh pasta, which you can watch being made as you walk in the door. 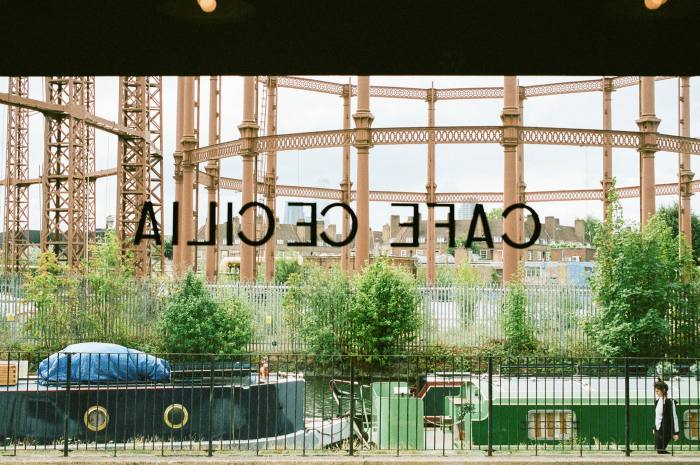 Max Rocha’s buzzy contemporary restaurant opened on an unremarkable stretch of road east of Broadway Market last year, opposite the old Hackney gasworks, but it still needs to be booked weeks in advance to secure a table for dinner. Breakfast and lunch are a slightly less competitive affair. The decor is austere with white walls, dark floors and unadorned tables — which doesn’t do much to soften the restaurant’s new-build lines — but the food is simple and inventive, including staples such as fresh pasta and cheese toasties amid a regularly rotating menu.

A strong selection of natural wine options is on hand to wash it down (east London is consistent, if nothing else). Rocha’s pedigree as a chef — his résumé includes stints at St John and the River Café — has helped draw the crowds, not to mention his connections to the fashion set via family: his father John and sister Simone are both distinguished designers. My vote is to book one of the new pavement tables that have sprung up for summer.

Broadway Market is either pretentiously gentrified or lively and bustling, depending on your perspective and mood. The last eel and pie shop on the stretch of road leading to London Fields moved to Essex in 2021, while a Planet Organic — much maligned by some locals — opened in early 2022. There are some gems, however, among the estate agents and Aesops: notably, butcher shop-cum-restaurant Hill & Szrok, fishmonger Fin & Flounder, Pavilion Bakery (a sibling of the above-mentioned Victoria Park café) and udon joint Koya Ko. The Dove pub is also great for people-watching when the market is in full swing on Saturdays. A hidden oasis on Kingsland Basin near Haggerston, Toconoco serves simple, delicious Japanese fare such as udon, soba and onigiri stuffed with a variety of fillings. Cakes, including a daily cheese cake and ujikin (a kind of matcha-flavoured snow cone) and a variety of teas (I’m partial to the buckwheat) and coffees round out the offerings. The café is designed to be kid-friendly with play areas carpeted with Astroturf, which can be both adorable and little loud depending on the day. Outdoor tables offer a calmer respite if playtime is particularly boisterous.

Towpath opens from spring to autumn in an outdoor space directly on the canal path, with an awning and some covered tables tucked in alcoves. The food is seasonal with Mediterranean flair, served on mismatched china and enamelware, and the menu is updated daily. Some favourites endure, however: notably, the radishes with grilled bread and taramasalata, and courgette and white bean stew finished with a little creme fraîche. The oat walnut cookie is far more delicious than something so homespun has any right to be. Expect queues on weekends. 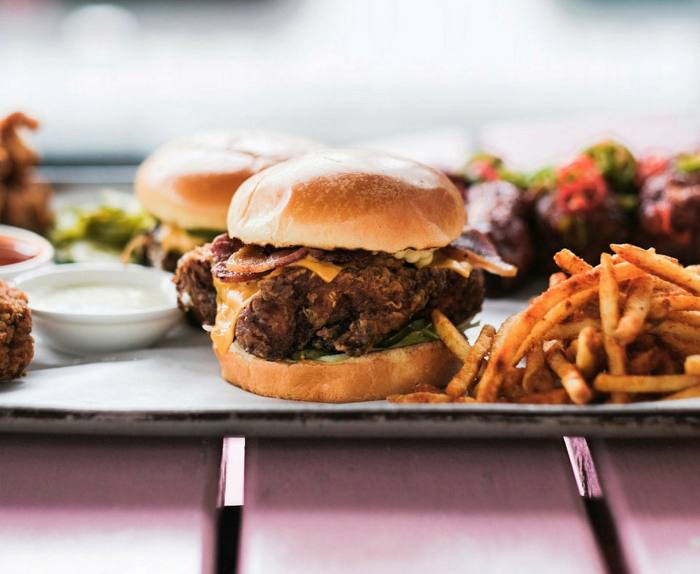 Head to Studio Kitchen for burgers on the water

The entrance to this canalside bar is a little tricky to find, which has helped keep it under the radar. Located in the complex attached to Holborn Studios, a well-known photography studio, the bar and restaurant offers some colourful tables directly on the canal that are ideal for evening drinks in the summer. The menu skews towards southern US and barbecue, and the fried chicken sandwich is one of the best around. The seats on the water can be slightly bouncy as people walk by, depending which spot you get, an effect that can be magnified after a few drinks.

This Turkish-style floating seafood shop takes fish and chips to a whole new level. The red painted fishing boat moves locations, but has been spotted in City Road Basin, near Broadway Market and in Hackney Wick. Lightly fried, gently spiced fresh fish and seafood such as octopus and squid come spiced, spritzed with lemon, perfectly golden and hot, with chips and a crisp salad. The location of this moveable feast can be tracked via Instagram and other social media handles. 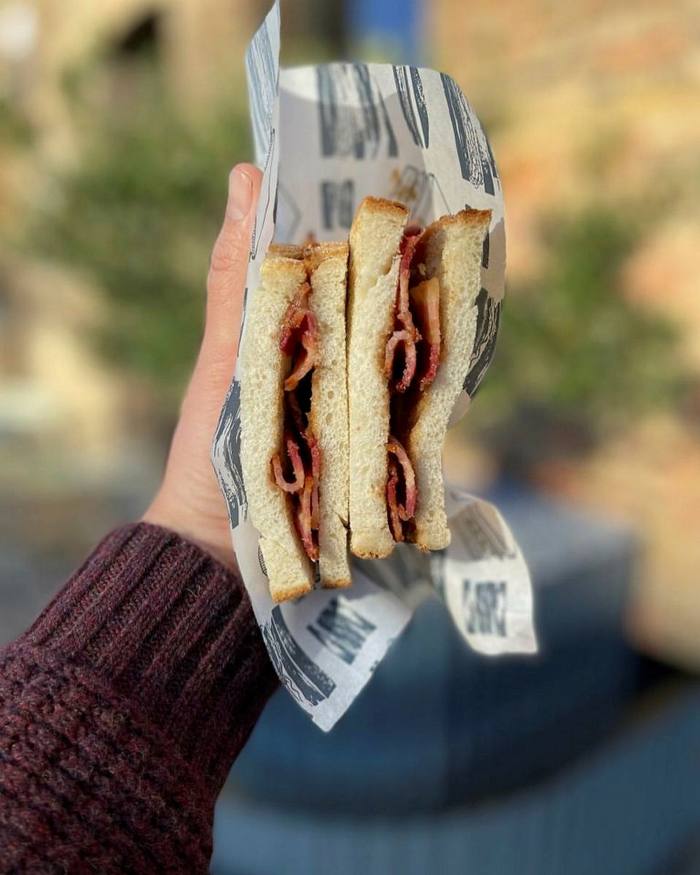 The renaissance of the formerly dodgy area around King’s Cross and St Pancras train stations continues apace. Just down the walkway from the water park in front of Central Saint Martins — a scrum on a recent sunny weekend of jubilant children and fashion students on studio breaks — is Sons + Daughters. Perhaps it’s the residual North American in me, but I miss proper diners, and this retro-styled sandwich bar in Coal Drops Yard goes some way to filling that yearning. The sandwiches can only be described as chunky, stuffed with highly flavoured ingredients on thick-cut bread, while the soft-serve ice cream and beer felt refreshing at the time, if not so much half an hour later in the 30C heat. The vegan sandwich featuring “magic mayo”, chickpeas, crisped kale and pickles is a favourite — even for this omnivore — as is the soy and wasabi-inflected roast chicken.

I’ll come straight out with it: I am biased against Camden. This is probably not fair and based almost exclusively on some truly terrible nights out in my early London years before I knew better. Camden Market is similarly tainted. However, amid the stands slinging mediocre burgers and waffles drowning in Nutella to tourists and club kids is Tsujiri, a Japanese dessert shop that has the best matcha soft-serve in the capital. It is the perfect jade green, not too sweet and ever so slightly smoky. There are sundaes and floats for the adventurous, but in this I am a purist: an unadorned little cup is the perfect antidote to the heat and crowds in summer. The main disadvantage of this 19th-century pub in Primrose Hill concerns flowers. Specifically, one room with truly terrible floral wallpaper. Otherwise this well-established gastropub boasts a wonderful menu and a verdant beer garden that stands in contrast to the nearby chaos of central Camden, though it does fill up quickly on sunny weekends. The beer selection is also varied, and the pub tends to be filled with a mix of carousing Camden acolytes and Primrose Hill locals with equally prim dogs.

Previously known as The Prince Albert, this neighbourhood establishment shut down in 2014 and was slated for redevelopment as flats before a local campaign helped it to reopen in 2020. The building itself is beautiful, with a bottle-green tiled exterior, coloured window panes and a handsome wooden bar with a good selection of beers and wines. The back garden is a lovely place to retreat with friends or a book when it’s quieter, with heat lamps above most tables for colder seasons.

Do you have a favourite pit-stop on London’s urban waterways? Tell us in the comments