A 23-year-old Navy technician is charged with murder and arson after he allegedly confessed to killing his wife with a hammer and setting fires throughout their home in an attempt to kill their 13-month-old son late Wednesday night.

Police and fire officials arrived to a home on Sherman Street about 10:30 p.m. Wednesday after reports of a house fire and found George Bryan Dodson II kneeling in the grass covered in blood and soot, according to an incident report from the New London Police Department filed in court on Thursday.

When officers asked him what happened, according to court records, he replied: “I killed her.”

Dodson told police that his wife, their baby and their dogs were inside the blazing house. He allegedly told police that he killed his wife with a hammer and set fire to their house to kill their 13-month-old “rather than having to use the hammer or knife,” according to the report.

He told police he carried out the crime spree because he was jealous of another relationship his wife was allegedly having.

“Jealousy, we opened up our relationship, and she found another man she loved more and I could not stand the thought of it so I killed her,” he allegedly told police who asked him why he killed his wife, according to court records.

Police found Dodson’s wife, who has not yet been identified, laying on the living room floor with “significant trauma to her head” and fire-related injuries on her upper torso. They carried her out of the fire and onto the front porch, where she was pronounced dead, according to court records.

A hammer was found on a counter near the kitchen sink, records show.

Investigators found that multiple fires had been intentionally set throughout the house, one on the couch in the living room, one on a chair in an upstairs bedroom and one at the center of the bed in another upstairs bedroom. Dodson admitted to starting the fires, records show.

The couple’s son was found “conscious but lethargic” in an upstairs bedroom and was rushed to Lawrence + Memorial Hospital with injuries related to the fire, police said. He was later transferred to Yale New Haven Hospital and was in stable condition as of Thursday afternoon, police said.

Dodson was also taken to Lawrence + Memorial Hospital for non-life-threatening injuries. He had a cut on his neck that he eventually told police was self-inflicted. Multiple knives were found in the kitchen near the hammer, according to the police report.

Dodson, an active duty member of the Navy, is facing a slew of charges connected to his wife’s death, his baby’s injuries and the fire, including murder, arson, conspiracy to commit murder and child endangerment, according to officials.

George Bryan Dodson II is charged with murder, arson, conspiracy to commit murder, child endangerment, and a slew of other charges following the fire that broke out in New London on Wednesday night. (New London Police De)

According to the Navy, Dodson has been stationed on the USS Newport News, which is home-ported at the Naval Submarine Base in Groton, since June 3, 2019.

He is a second-class petty officer who serves as an electronics technician and has been enlisted in the Navy since 2017, according to Lt. Seth Koenig, spokesperson for the Submarine Readiness Squadron 32.

The neighborhood was blocked off for blocks in either direction on Thursday as police, K-9 units and forensic examiners investigated the scene of the fire and crimes.

Mark Battista said he helped a woman who lived in that house shovel their sidewalk in January 2021 and knew that a woman lived in the home with her husband, who was in the Navy, and their young son.

He shared messages between him and the woman, whose last name was Dodson, with the Courant. She told Battista that the family had recently moved to the area after being relocated by the U.S. Navy.

Battista said that in the winter of 2021, the woman posted in a Neighbors of New London County Facebook group and said she needed help shoveling. She wrote that she was pregnant and her husband was actively deployed at the time.

Battista volunteered to help shovel and talked to the woman about her husband. She told him he was a nuclear submarine operator for the Navy.

Battista said the expectant mother was excited about their family and their new home.

“She never had a bad word to say about him and was just excited about her new addition and her new house that they bought,” Battista said in an email exchange with the Courant. “Overall she seemed like a happy, nice person who was in love with being a Navy wife and a mom.”

Battista talked to the woman again in July 2021 when there was a leak in the ceiling of her home. Battista asked her to type up a message explaining her situation so that he could send it out to people he knew and helped her put out another message looking for someone to fix it

He also shared those messages with the Courant.

In them, Dodson wrote that she and her husband had bought the house in September and found out they were having a baby 10 days later. She wrote that her husband had missed out on a large chunk of their son’s life while away at sea. He was only home a couple of nights a week and the rest he was working on the boat.

Then while he was away, the leak started in their kitchen and mold had begun to grow in the ceiling and she was worried about her son’s health. She had received some advice from handymen on how to fix it, but they all refused to do the work despite charging her for the time.

He said he would try to help her find someone to do it free of charge or at as little cost as possible.

In the messages, Dodson also told Battista that she and her husband had two dogs.

Dodson was also charged with cruelty to animals stemming from the Wednesday night fire. He was being held on a $3 million bond and appeared in court in New London on Thursday. A strike involving over 2,000 London bus drivers has been called off after the workers accepted a higher pay offer – UKNIP 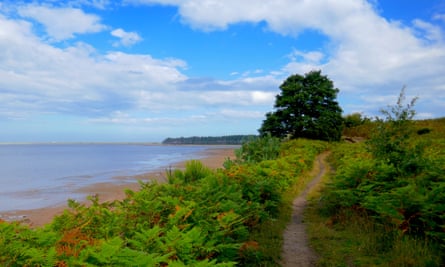 ‘No lack of wildness’ – a car-free break on the John Muir Way, Scotland | Scotland holidays