The latest trailer for Arsenal’s All or Nothing series has dropped, and it includes a team bust up in training, Mikel Arteta losing it and the moment the manager took Pierre-Emerick Aubameyang’s captaincy away, and you can see it in the video below.

The Gunners are the latest team in the Premier League to be given the fly on the wall documentary series treatment, and fans can see it on August 4th, after Manchester City and Tottenham Hotspur have previous gone under the microscope.

Whilst City’s season had very little downs, or drama, as they won the league and reached 100 points, Spurs had the sacking of Mauricio Pochettino and the hiring of Jose Mourinho, as they finished sixth.

Similarly, their north London rivals went through plenty of drama last season in the Premier League, as they attempted to get back into the top four.

The forward’s controversial departure from the club was one thing that was most intriguing whether Arsenal would allow it to be shown and now it looks like we’ll get at least some of the juicy details.

Aubameyang was stripped of the captaincy after missing the Southampton game due to ‘disciplinary reasons.’ Image: Alamy

The series looks like it will heavily focus on Arteta, who also made an appearance in City’s season under the spotlight as he was then Pep Guardiola’s assistant manager.

Arteta can clearly be seen getting emotional and angry at the players, shouting at them, banging equipment and shouting at a fourth official.

There’s also a training ground scuffle to look forward to and Granit Xhaka telling someone that everyone can blame him, which usually happens when he plays anyway. 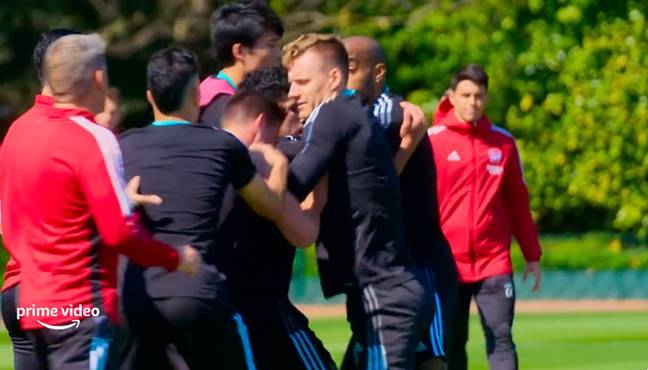 The training ground dust up seems to be between Cedric Soares and Alexandre Lacazette. Image: Amazon Prime Video

There was definitely improvement from the north London side last season but ultimately they still failed with their main aim, to reach next season’s Champions League.

They looked set to make it with just three games left, but lost the north London derby and to Newcastle United in a number of days, to let Spurs leapfrog them into fourth.

Once again they will be hoping to make it into Europe’s top club competition and the addition of Gabriel Jesus could be the catalyst to get them there.