CHURCHES in England have offered sanctuary to people fleeing punishment and persecution — but it was those seeking to escape the heatwave who received shelter this week as UK temperatures broke records.

The thick stone walls and high roof of many churches mean that they are able to remain cooler than many other buildings without aircon, and churches threw open their doors.

St Luke’s, West Holloway, in north London, served iced drinks and provided free wi-fi to those in need of shelter. The Vicar, the Revd John MacKenzie, said: “We’ve been delighted to open the doors to welcome our neighbours and those just passing by some coolness in these oppressively hot times. The climate emergency is real, and is happening now, with record temperatures across England and Wales and much of the world as well.

“St Luke’s has been cool for those in their eighties to those not quite yet a year old, and many in between. We hope that the ice and water, company, and comfort have helped make St Luke’s one of the coolest places around.”

In north-west London, the Vicar of St John’s, Kensal Green, the Revd David Ackerman, described the heat as “awful”, and said that he had invited families to come to his garden if they needed some space and shade.

In Pudsey, near Leeds, the Revd Richard Dimery posted on social media that Pudsey Parish Church would be “a welcoming safe cool space with water and squash on tap to keep people hydrated, especially important for people whose homes or flats just turn into ovens or the vulnerable who need to escape the heat”.

Elsewhere in Yorkshire, St Margaret’s, Horsforth, hosted children from the neighbouring Church of England primary school, after the school asked whether it could move some the classes into the nave. The Team Rector, the Revd Nigel Sinclair, said: “I spent seven years cursing that we have a church too big for us, but, during the Covid pandemic, I was extremely grateful for the extra space for social distancing, and now during the heatwave we’re also one of the coolest buildings in the area.”

The church hosted classes on both Tuesday and Wednesday as temperatures rose above 40°C in parts of the UK.

Mr Sinclair said that climate change was a big concern, and the church council had recently set up a working group to take steps to achieve the Church of England’s goal of reducing emissions to net zero by 2030.

In London, the fire brigade declared a major incident after a surge in fires across the capital. Train lines were disrupted, the runway at RAF Brize Norton melted, and there were fires in woodland along the A2 motorway near Dartford.

Sky NewsAerial shot of Wennington Church after the fire on Tuesday. The village was still sealed off on Wednesday; so the PCC had not yet been able to assess damage

The Bishop of Norwich, the Rt Revd Graham Usher, who is the lead bishop for the environment, said: “Year after year, we are seeing more carbon in the atmosphere, with new records set for the hottest average summers on record, and this week the UK has hit 40°C for the first time ever.

“This adds to the wake-up call to world leaders to act faster and more decisively to address the climate emergency. I am glad that the Church of England’s Routemap to net zero received such strong support last week at General Synod [News, 15 July] — now we need to put it into action.

“Those with underlying health risks, or rough-sleepers, who often have nowhere to shelter and limited access to water and sunscreen, are at particular risk during heatwaves. This is an example of how climate change affects the most vulnerable most severely. Many churches are naturally cool in the heat, and I encourage churches to do all they can to support those in need.”

Scientists have said that all heatwaves now are worse because of man-made climate change. Dr Friederike Otto, senior lecturer in climate science at the Grantham Institute, at Imperial College, London, said: “Climate change is driving this heatwave, just as it is driving every heatwave now. Greenhouse-gas emissions, from burning fossil fuels like coal, gas, and oil, are making heatwaves hotter, longer-lasting, and more frequent. Heatwaves that used to be rare are now common; heatwaves that used to be impossible are now happening and killing people.”

She continued: “The only way to stop heat records being broken time and again is to stop burning fossil fuels as quickly as possible.”

While climate change was causing problems in the UK and parts of Europe, young Christians published an open letter to bishops attending the Lambeth Conference next week. Among their requests were for the Church to stop funding the burning of fossil fuels and instead disinvest from oil and gas corporations.

The letter, from the Young Christian Climate Network, said: “As Christians, we are called to express the restoring justice of God. We are to ‘learn to do good; seek justice, correct oppression’ (Is. 1:17). Seeking justice means working in solidarity with those who are suffering the worst effects of the climate emergency, one of the biggest crises of our time. The Anglican Communion’s efforts to address the climate crisis cannot be separated from God’s call for Christians to live justly.”

It urged the Church to “sever all remaining financial ties with fossil-fuel companies”, to engage in the political arena to demand climate justice, and empower young people to lead on climate policy, and for churches in wealthier nations to increase resource-sharing and fund-raising for climate-vulnerable churches.

The group will be holding a vigil outside Lambeth Palace at 5 p.m. on 3 August, which is the Conference’s “climate day”. One of the group, Sophie Mitchell, said: “The Lambeth Conference is a significant meeting of Christian world leaders. We hope and pray that, during the Conference, bishops will listen to the voices of young people and those affected by climate devastation and feel called to use their powerful voice to speak out on the climate emergency.” 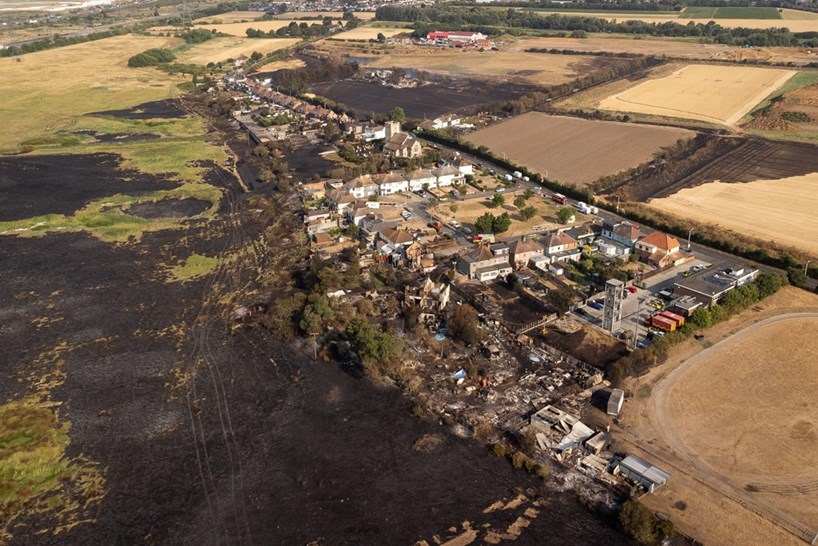 AlamyThe aftermath of the fire at Wennington, east of London

The UK heatwave comes two months after Christian Aid published a report, Scorched Earth, which said that London and nine other world cities were facing the prospect of running out of water because of climate change (News, 20 May). It quoted the CEO of the Environment Agency, James Bevan, who warned that, within 25 years, London and the south-east of England could run out of water.

The cost of a severe drought to London’s economy has been estimated by Thames Water to be £330 million per day, and would have severe economic, social, and environmental consequences. The Environment Agency has said that, by 2050, some rivers will have 50- to 80-per-cent less water during the summer months.

In the House of Lords last Friday, the Second Reading of the Climate and Ecology Bill took place. Supporters of the Bill say that it is the only proposed legislation before the UK Parliament that ensures a “comprehensive approach to the joint climate and nature emergency”. The Bill would help to align the UK’s carbon budget with a global effort to keep average temperature rise under 1.5°C, as well as put forward ambitious plans to restore biodiversity, connecting the Government’s response to the linked climate and nature crises.

The Bishop of St Albans, Dr Alan Smith, spoke in support of the Bill, and condemned the relative silence from the candidates contesting the race to be next leader of the Conservative Party, compared with the contributions from Boris Johnson.

He said: “This debate is taking place at a crucial moment in our country’s battle against climate change. Despite the circumstances that have led to a change of Prime Minister, there was at least genuine confidence in the urgency and seriousness with which he was approaching the issue of climate change: he spoke out on a number of occasions.

“Therefore, it seems all the more extraordinary that, in the current events going on, we are hearing virtually nothing from candidates who want to be the next Prime Minister about this vital area.”