Dozens of people suspected of being part of a criminal network that helped send up to 10,000 people to the UK in small boats have been arrested in a Europe-wide crackdown.

The group charged around €3,500 (£3,000) for a place on a dinghy, often packing up to 60 people aboard as they were sent on the perilous journey across the Channel from France.

On Tuesday, dozens of arrests were made in what international law enforcement believe is the biggest global crackdown on gangs involved in people smuggling across the Dover Strait.

It comes as more small boats have made the perilous crossing to Britain this week, with the number of arrivals for the year now more than 12,850 according to data compiled by Sky News.

Raids took place in the UK, Germany, France and the Netherlands on Tuesday, as part of a joint operation involving agencies from across Europe.

The organised crime gang is suspected of sending up to 10,000 people across the Dover Strait in the past 12 to 18 months.

At times up to 15 boats were launched almost simultaneously with half successfully making it across to the UK.

Police working across the continent made 39 arrests and seized 150 boats as well as cash, firearms and drugs.

The arrests include five men and one woman detained in the Docklands and Catford areas of London on Tuesday morning.

In a sign of how global efforts to smuggle people across the Channel have become, the gang is believed to have sourced dinghies thousands of miles away in Turkey.

Large purchases of small boats and other items are often banned or flagged to law enforcement, making it unsafe to source items closer to Calais.

The raids follow an investigation by Eurojust and Europol, as well as individual state agencies like the UK’s National Crime Agency (NCA).

NCA director of threat leadership Chris Farrimond said: “So they’ve been sourcing them via Turkey, and basically warehousing them in Germany and then calling them forward as they require them for the crossings. And it’s quite a slick operation.

“And it really required us to get into that small boat supply chain in order to understand what the traffickers were doing. And then attack them where it was going to hit their logistics and make life difficult for them.” 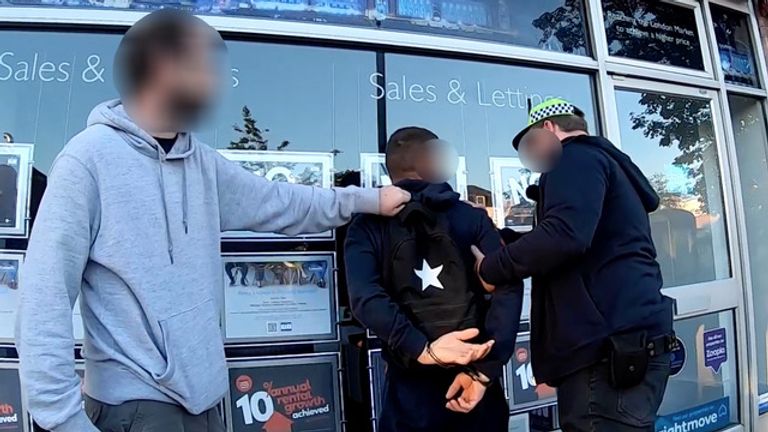 Image:
Raids in the UK resulted in arrests in Catford and Docklands areas in London

Mr Farrimond described people smugglers as using “cheap, barely sea-worthy vessels” to hold up to 60 people which are driven by an “underpowered engine which can’t really shift the number of people who are on board”.

At least 12,850 people have succeeded in reaching the UK aboard small boats in the first half of 2022, Sky News data shows.

More than 3,000 arrived in June alone and more than 7,000 have come to the UK since Home Secretary Priti Patel announced the Government’s controversial Rwanda offshore policy on 14 April.

The scheme has been criticised as “cruel and nasty” by charities but defended by the government as “the morally right thing to do”.