PREMIER League clubs will get the go-ahead to open safe standing areas in their grounds from the start of the new season.

Ministers are expected to announce the success of a trial at five stadiums – and invite all top-flight teams to introduce their own sections.

Standing has been illegal in the two top divisions since all-seater stadiums were introduced in 1994 following the Taylor report into the Hillsborough disasterCredit: Rex

It will mean that fans will be able to stand to watch Prem or Championship matches for the first time in nearly 30 years.

Standing has been illegal in the two top divisions since all-seater stadiums were introduced in 1994 following the Taylor report into the Hillsborough disaster.

But following a pilot scheme last season at Chelsea, Spurs, Cardiff City, Man City and Man United, all other top clubs will be give the all clear to follow suit.

A final report on the government-commissioned trial seen by The Sun on Sunday says the sections delivered a positive impact on spectator safety and improved fans’ matchday experience. 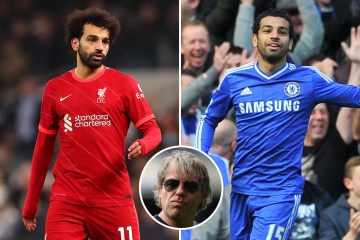 Sports Minister Nigel Huddleston is expected to make the announcement at Tottenham’s White Hart Lane ground where he watched the North London club beat Burnley 1-0 in May.

A government source said: “We are on the side of fans and determined to deliver on a manifesto commitment to bring safe standing to our grounds and improve the fantastic experience already on offer in the Premier League and Championship.

“We will never compromise safety and will work with football clubs, supporters groups and the police to deliver the safe standing we know people want.”

A 2-2 draw in January between Chelsea and Liverpool at Stamford Bridge kicked off the test events.

Fans were allowed to stand for the whole game in allocated spaces behind a barrier or a rail in areas of persistent standing.

Each supporter had to occupy the same area they would take if they were sitting, with a traceable, numbered ticket.

Seats could not be locked in the up or down position, so fans could choose to sit if they wished to, and the standing areas could not affect the views of other fans.

Other parts of the grounds remained all-seated and fans were expected to sit in these areas.

An interim report into the trial, published by the Sports Grounds Safety Authority found:

goal celebrations were more orderly with no forwards or backwards movement of fans.

Barriers offers stability for people moving up and down aisles and gangways, latecomers could enter their space more quickly and pockets of overcrowding could be identified by officials more easily.

Standing areas are already commonplace in Germany’s Bundesliga and there are similar examples across the rest of Europe, the United States and Australia.