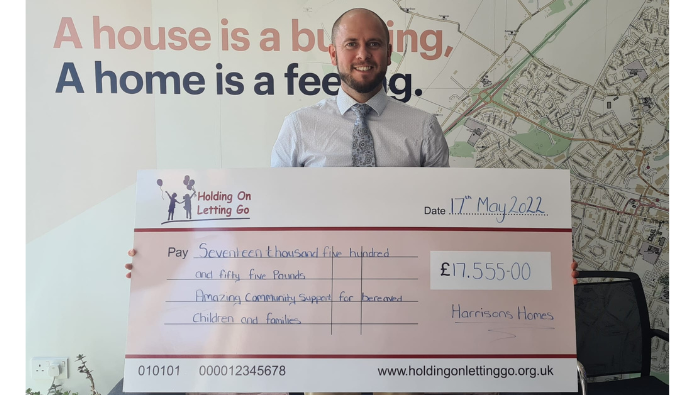 The agent’s Garden Sanctuary featured a carbon-neutral cabin office by Koto Design and a stunning selection of biodiverse plants with stepping stones over a trickling stream.

The beautiful planting will not go to waste now that the show is over as many of the plants and trees will be donated to Groundworks, an environmental organisation that works with local communities to provide greener spaces to improve resident’s quality of life, health and wellbeing.

Some of the plants that didn’t quite make it onto the final garden will be donated to Waywards Plants, the official recycling partner of the RHS Chelsea Flower Show, where the plants will be distributed to local schools and community gardens.

Trees from the garden will be donated to Trees for Cities, a UK charity that aim to improve lives by planting trees in cities.

Additionally, the Koto cabin has caught the attention of a hotel in Scotland and was purchased with the intention of becoming a relaxing morning coffee room for its guests.

Lesley Cairns, managing director of Hamptons, said: “We are delighted to be awarded a gold medal for A Garden Sanctuary by Hamptons at this year’s RHS Chelsea Flower Show, it was an honour to be part of a fantastic event hosted by the RHS and to work with Tony Woods and Koto on this amazing garden.

“There were many wonderful gardens at the show this year but our garden seemed to capture guests and visitors’ attention and we couldn’t be happier. In the run up to the show, we surveyed our clients to find out what their garden means to them and 92% of respondents considered their garden a sanctuary as well as a social space and 39% said they had plans for a home office of garden room in the future.

“Given the way life has changed over the past few years, now seemed like the perfect time for Hamptons to be involved in such an incredible event and we are thrilled with the result.”

Ottilie was born with 20% kidney function, has chronic kidney disease and has only one transplanted kidney

When she was 24, she was told that she had six months to have a transplant or face a lifetime of daily dialysis.

In 2007, she had her first kidney transplant, donated by her mum Lesley. After her transplant operation, her surgeon David Cranston, who performed the operation at the John Radcliffe Hospital in Oxford, told her she would have to stop playing football.

She is currently world cycling champion for the 11th time and has won six European and 18 British gold medals representing Great Britain at the World Transplant Games.

Ottilie is now about to tackle a gruelling 21-day cycle ride through seven countries, covering over 1,500 miles from Bedfordshire to Majorca to raise money for charities supporting the work of the two surgeons who helped her.

She is hoping to raise £20,000 for cancer charities UCARE and The Urology Foundation.

Ottilie said: “This is my way of saying thank you to the two surgeons who saved my life and to help fund the research that will make a difference to other people like me with kidney disease.

“I used to joke that one day I would cycle home rather than fly. Now I am going to ride my own grand tour to try to say thank you to the two incredible surgeons who saved me.

“If it weren’t for the legends David Cranston in Oxford and Tim O’Brien at Guy’s in London, at best I would be hooked up to dialysis machine three or four times a week and probably leading a very sedentary life.

Adam Lawrence, chief executive of London Square, said: “Ottilie is an inspiration to us all and we hope our support will help her to achieve her ambition to ride home to help others with kidney disease.”

Ottilie sets off on the London Square OQ Vuelta A Casa Cycle Challenge from Luton today with a team of three friends and joined along the way by supporters such as London Square’s Daren Nathan and James Hooper.

Find out more and donate at: http://gofund.me/b1dcd5e0

The funds have been raised through a mix of donations from sales and charity events.

Chris Ellis, director of Harrisons Homes, said: “We are very committed to supporting our community and the whole team has got behind our fundraising efforts for Holding On Letting Go.

“We believe it is a very worthwhile cause. It’s a big incentive for the team to know that £50 from every house completion goes straight to such a special charity.

“Team members have also raised money with charity walks, bike rides, raffles and Christmas appeals. We are delighted with our new fundraising total.”

Barratt Homes: Housebuilder Barratt Homes planted more than 1,500 trees in communities across Britain, including at its new development in Bedhampton, to mark the Platinum Jubilee last week.

Jon Green, Barratt Homes marketing director for the Southampton division, said: “Her Majesty The Queen has been a constant positive force in all of our lives since taking the throne in 1953. We wanted to recognise her incredible service to the country and her communities by fulfilling her wish to plant trees that improve the sustainability of the local environment.

Lettings4U: A new rentals-focused property portal called lettings4u has launched and will donate money to Shelter for each agent that signs up.

The money will go towards giving one night of paid accommodation for a homeless person.

The lettings4u will be free to use for pre-approved tenants looking to find a new property.

Agents will be able to advertise properties to vetted tenants, saving them time and money, all while support Shelter’s work to tackle homelessness.

Agents Giving: Property professionals are being encouraged to take part in next week’s Agents Giving Day, with the cost of living crisis making support more crucial.

Agents Giving Day takes place on 16 June and is supported by The Guild of Property Professionals and Relocation Agent Network this year.

The aim is to encourage support of all local food banks by donating food parcels as more people than ever are facing extreme food poverty.

Agents can help by preparing a simple food parcel of items to donate to their local food bank to help with the supplies they so desperately need.

Check with your food bank the items they are in most need of, collect them up and make the donation.

Your office can collect food donations from your wider community, you can also contribute by purchasing and donating items via your local supermarket collection bin.

Last year Agents Giving Day saw thousands of food items collected and this year it is hoping to beat that figure.

David Newnes, Agents Giving chairman, said:  “We are encouraging everyone to support their local food banks this Agents Giving Day.

“By simply collecting up and donating a food parcel it can help make such a difference to those living and going hungry in our local communities.”

Find your local food bank and see what items they require at https://www.trusselltrust.org/get-help/find-a-foodbank/

You can then tell Agents Giving which food bank you are supporting by registering at: https://agentsgiving.org/event/agents-giving-day-supporting-local-foodbanks/

Fine & Country: The Fine & Country Foundation has awarded another round of grants to 16 charities working across the UK and overseas in their joint mission to end homelessness and poverty.

A total of £31,752 was awarded this spring, bringing the grand total granted to charitable organisations by The Foundation in 2022 to more than £87,000.

The Grant Scheme, which is held every spring and autumn, aims to provide financial support to non-profit organisations, specifically focused around supporting charities fighting against homelessness and poverty.

Fine & Country offices around the world are encouraged to submit applications nominating a charity of their choice to receive a donation of up to £3,000.

These proposals are then reviewed by The Foundation board and successful projects are awarded with grants.

The money presented to these charities will offer them much-needed funds to continue the fundamental work they carry out for their communities.

The Fine & Country network also works throughout the year to secure donations to be able to support as many charities as possible through the Grant Scheme.

Many offices and agents have gone above and beyond in their fundraising efforts, taking part in a number of initiatives to collect money for The Foundation, such as Tough Mudders, skydives and the Around the World in 80 Days Challenge.

Through their effort and the generous donations received, The Foundation has been able to award £87,000 to charities this year, with the goal being to give away £100,000 during 2022.

Jon Cooke, trustee of The Foundation, said: “Without the support of the network and the public, The Foundation would not be able to do the work we do.

“Since its inception, with the help and support of the network, The Foundation has been able to give away hundreds of thousands of pounds to help those in need. We are happy that we were able to support 16 more charities in this latest round of grants, our hope is that grant scheme will continue to make a difference and have a positive impact in many people’s lives.”