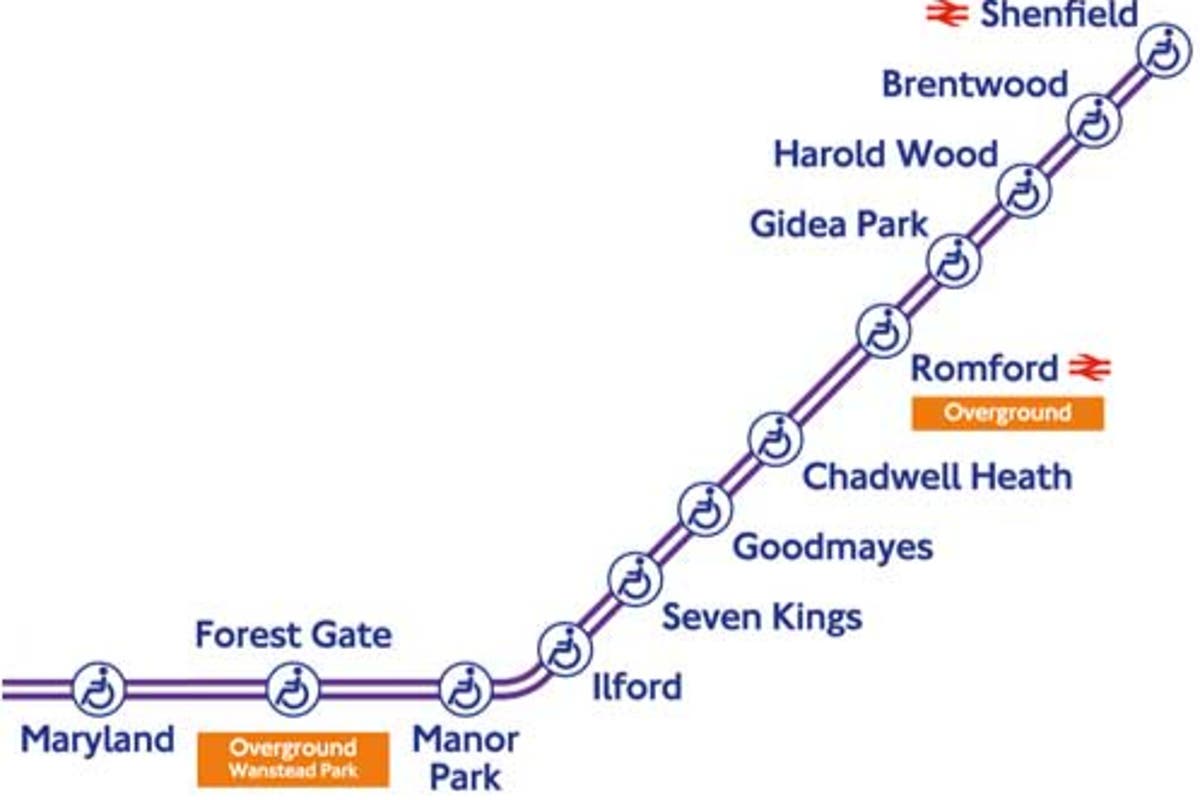 rossrail has been such a long time coming that Londoners might assume they have missed the chance of finding a home on the Elizabeth Line.

The ‘Crossrail effect’ has led to a rash of new neighbourhoods springing up along the new east-west trainline, and surging house prices in places like the south east London suburb of Abbey Wood.

However there are still plently of areas to find a relative bargain. The cheapest areas are all on the east and south-east London sections of the Elizabeth line.

On the eastern section, which splits off from Whitechapel to take commuters to Shenfield, there are five areas where the average house price is below the £500,000 mark while flats can be picked up for under £250,000.

In Chadwell Heath, houses cost £414,750 on average, the cheapest to be found on the eastern section. The east London outpost is also the cheapest place to buy a flat across the network with average prices at £214,120.

But its proposals won’t be translated into reality until a developer with deep pockets buys into the idea and provides the necessary cash.

Get off the stop two stations before Chadwell Heath at Seven Kings, and house prices creep up to £470,380 but still come in under the £500k mark.

There have been no big-bang housing developments, no trendy artisanal cafes, no new arts venues. Perhaps because — unlike other stops along the line — there weren’t acres of unloved industrial land to build on, and nothing terribly wrong with this pleasant and family friendly suburb to start off with.

The planning pipeline for the area is pretty threadbare although Redbridge Council is backing plans to redevelop a council owned car park on the high road into just over 200 flats plus some form of health centre. There is, as yet, no start date for the work.

There are a few streets of Victorian houses, around Meads Lane, although these are rarely available and are snapped up quickly.

Ilford, the third cheapest east London area to get a home by Crossrail

The third cheapest east London Crossrail hotspot is Ilford, with an average house price of £485,540. Ilford is a town within a city, and its affordable property prices and plentiful open space are drawing buyers out of more expensive parts of east London.

Crossrail has started to make a mark on this somewhat scruffy postcode – new homes have been built, more are planned, and although the High Road is dominated by low rent chain stores Ilford Lane is lined with fabulous sari stores and some outstanding Indian restaurants.

The most obvious change in the area so far is the addition of a bone fide skyscraper, the 33-storey Pioneer Point, a build to rent development (one bedroom flats available from £1,410pcm).

A whole series of mid-sized new housing developments are also on the horizon as Redbridge Council seeks to build 6,000 new homes by 2030. Telford Homes plans to redevelop a Sainsbury’s supermarket with more than 1,000 new homes to buy and rent on Roden Street. Work is expected to start on the site next spring, said a spokeswoman.

And last summer another housebuilder, Montreaux Ilford Developments, was granted planning permission to replace Ilford Retail Park with a 29 storey block of more than 600 flats plus a new primary school.

In between Chadwell Heath and Seven Kings is Goodmayes. Super leafy, totally suburban, and full of affordable Edwardian terraces, its is a good choice for buyers and renters who find more central locations too hectic.

Families in particular love Goodmayes for its high performing schools and open spaces like Goodmayes Park, with its lake and basketball and tennis courts.

There has been very little in the way of regeneration pre-Crossrail but now that the Elizabeth Line is almost ready to roll that looks set to change.

In March Sadiq Khan rubber stamped plans by Weston Homes to build 1,280 new homes on the current site of a Tesco supermarket. Weston is currently accepting expressions of interest for homes at Lorimer Village – prices are still to be confirmed – which will have an on site primary school, landscaped gardens, and “village hall”.

Meanwhile, plans to build more than 560 homes on another former retail site – a defunct Homebase on the High Road – were given planning permission last summer. The site will have a gym, restaurant, café, as well as a “digital music academy” to train budding DJs, and a bike and scooter hire scheme.

Madison Square Garden Sphere, approved by the LLDC in March 2022

The most central area on the list, Maryland is one stop after Stratford in the borough of Newham. Stratford has already seen massive redevelopment and the biggest change on its horizon is the Madison Square Garden Sphere, which was given planning permission in March by the London Legacy Development Corporation after three years of debate.

The 90m tall globe-like music venue, with its showy LED light displays, will also feature a nightclub, bars, and restaurants and bring a touch of Las Vegas pizzaz to east London.

In terms of new homes, around 11,500 flats and houses have so far been built at the Olympic Park with another 21,500 to come by 2036. The first new neighbourhood, Chobham Manor, will complete this summer, and work has started on two more, East Wick and Sweetwater.

Stratford’s modern flats tend to get snapped up by first time buyers taking advantage of Help to Buy while the terraces of Maryland, half a mile to the east, are the territory of second steppers selling flats in more expensive parts of north and east London.