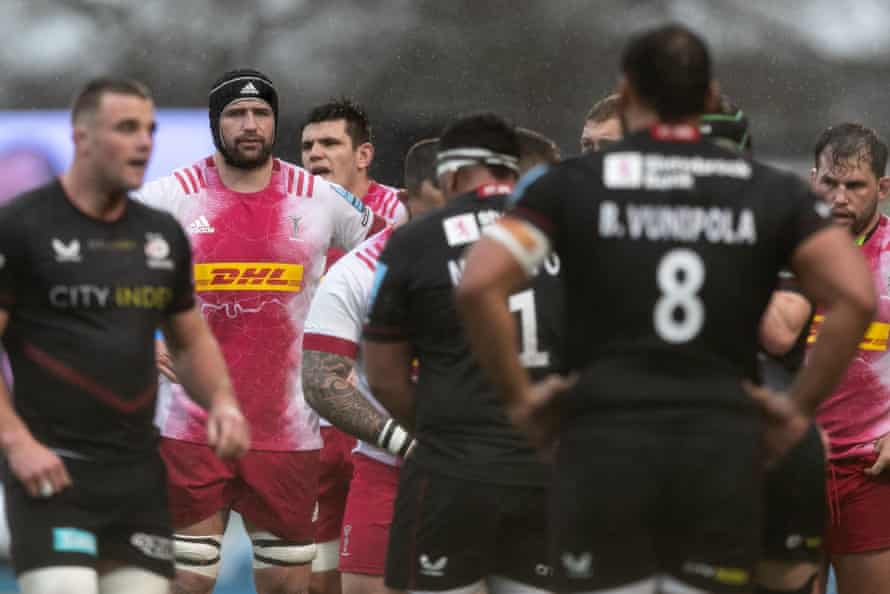 For a competition that can sometimes struggle for narrative the Premiership has hit the jackpot with the two semi-final fixtures next Saturday. Northampton’s often sublime, occasionally ridiculous victory against Newcastle ensured a trip to Welford Road to meet Leicester while Saracens and Harlequins, both beaten on Saturday, will as expected lock horns in north London. It does not take a marketing expert to bill next Saturday as Derby Day.

Two contrasting but equally fascinating fixtures are in store and, if Saracens and Harlequins do not share the history that Leicester and Northampton do, there is just as much antipathy, given the salary cap misdemeanours of Mark McCall’s side in recent years.

The defending champions do not try to hide their dislike for Saracens and, though it has been suggested that they struggle at the StoneX Stadium where the atmosphere does not lend itself to the helter skelter that Harlequins crave, there is a confidence coursing through Tabai Matson’s side that, when they click into gear, no one can live with them.

Saracens, by contrast, would relish giving the rest of the league a two-fingered salute by winning the Premiership in their first season back in the top flight. They will be seen as favourites in the eyes of many but they are still missing one or two cogs from the machine that made them nigh-on unbeatable in knockout matches not so long ago. Any side would miss someone of Will Skelton’s size and they have not found the control at scrum-half that Richard Wigglesworth or Ben Spencer used to provide.

Perhaps their biggest issue, however, is that they no longer have the leadership and the experience of Brad Barritt in midfield and there is a sense that Harlequins will have to exploit that if they are to return to Twickenham. Marcus Smith will also have to get the better of Owen Farrell in a subplot that is likely to be much talked about in the coming days.

Matt Symons of Harlequins in the defeat against Saracens in February. Photograph: Juan Gasparini/JMP/Shutterstock

Later in the day Leicester – who finished the regular season having been top of the pile in every round – will be expected to overpower Northampton just as they have in their two other meetings this season. Those results were the two worst performances of Saints’ season – according to their director of rugby, Chris Boyd – but Northampton have momentum on their side with six bonus-point wins in their past seven league matches and a cutting edge unrivalled in the Premiership in broken field.

Northampton also have a belief forged before that run started when – as the captain, Lewis Ludlam, revealed – supporters were calling for Boyd’s head. “It’s mad really,” Ludlam said.

“You had people calling for the boss’s head, asking for him to be sacked, saying there’s no leadership, there’s no quality in the team. What’s positive about this team is that we’ve been tight, we’ve been up against it but we’ve come up with solutions.”

There is also a certain serendipity in Northampton booking a semi-final against Leicester in the week Tom Wood announced his retirement at the end of the season. Eight years ago Wood scored an unforgettable last-gasp try against Leicester at Franklin’s Gardens before Northampton went on to clinch the title at Twickenham. Ludlam, who was a supporter in the stands that day and having on Saturday made his 100th appearance for the club, understands the magnitude of a knockout match against the Tigers.

“We’re really good under pressure. We enjoy that challenge, enjoy being the underdogs. I think it’s positive that we’ve got that experience of knowing games are do or die but it’s a completely new challenge going down to Leicester. They’ll be fired up, they’ve been fantastic all season but we’re really looking forward to going down there as underdogs.”