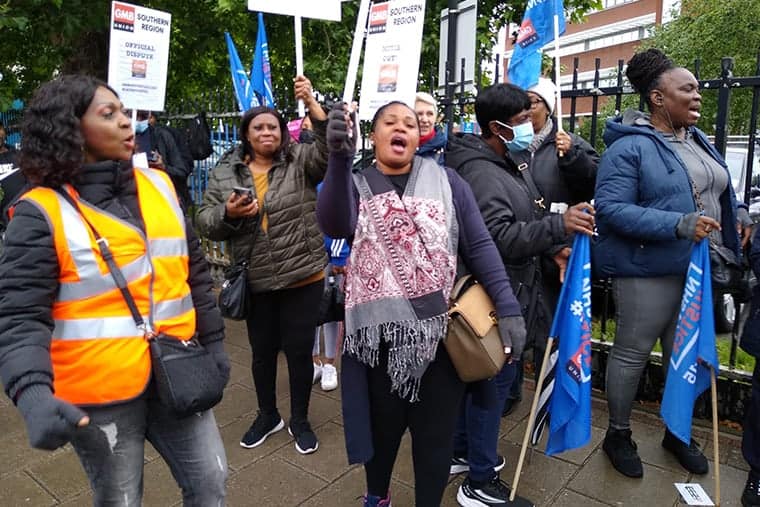 News in brief from workers’ struggles, including a strike by cleaners and domestic staff at a south London hospital

Strikers at St George’s hospital in south London are so buoyed by the success of their action that they plan to escalate. Cleaners and domestic staff in the GMB union followed a 24-hour walkout last week with a 48-hour strike this week.

They are furious with the bosses of NHS outsourcing firm Mitie, which withheld their wages for seven weeks while it restructured its payroll. The workers are demanding compensation and terms and conditions that equal those of the NHS.

Strike leaders are now calling for a week of action to back up their claim. They say that hospital managers have been forced to cancel operations because so few cleaners were on duty during the walkout.

In a panic measure, Mitie bosses have now formed an emergency response cleaning team to prioritise areas most in need.

One worker on this week’s 50-strong picket line told Socialist Worker that Mitie has a policy of understaffing, so they get people on part-time contracts to work overtime. But the overtime rates are exactly the same as for regular hours.

“I am striking because the company changed everything when they got the new contract,” said one striking domestic worker. They don’t want to give us our money.

“They don’t want to give us our holidays. And they want to get rid of long standing staff, so if you make a little mistake they try to push you out.”

Strikers voted in favour of a steward’s proposal to make the next strike a week long. The strike committee will have to ratify that decision.

“We are going to win the fight,” said one of the leading stewards. “This is the day, this is the hour. We have to stand together.”

Win against health privatisation in Bath and north east Somerset

Health campaigners recently scored a significant victory in the Bath and north east Somerset area after lobbying the local authority.

The council has decided, together with the local Clinical Commissioning Group, not to extend the contract for adult social care and primary healthcare services with the current provider, HCRG CareGroup. HCRG CareGroup is owned by Twenty20, the private equity firm that bought Virgin Care at the end of 2021.

It had stated publicly that it aimed to make a profit in the Bath and north east Somerset area within three to five years. This proved too much even for a local council that is often at the fore of privatising services.

The sale of Virgin to Twenty20/HCRG occurred without the council even being informed by its private sector “partners”.

Councillors therefore ignored the recommendation to extend the current contract for another three years, and the council has said it will now bring adult social services back in-house.

The experience in this area should serve as a warning about private companies brought in to run public services. To them, health and social care services are just other commodities to be bought and sold.

That’s despite the fact that these services provide crucial support to vulnerable people, and that profits can only be made by slashing services and attacking the workforce. Campaigners will now focus on ensuring that primary care services are provided again by the NHS.

Six further education colleges across North West England were set to strike on Tuesday and Friday this week over pay. Hundreds of workers are scheduled to walk out at The Manchester College, Burnley, City of Liverpool, Hopwood Hall, Nelson and Colne, and Oldham colleges.

The UCU union is demanding the colleges increase pay by at least 8.5 percent—below the present rate of inflation.

Strike to win a living wage by Churchill cleaners

They are also fighting for company sick pay and free travel for cleaning staff across the network. Other rail workers have these conditions.

RMT union member Rositsa told Socialist Worker that many of her colleagues are scared to get sick. “Many of us get sick and have to stay home for two weeks without being paid,” she said.

“Considering the minimum amount you receive while sick is £160, it isn’t enough to live on in London.”

Conductors on Transpennine Express trains walked out for 48 hours last weekend. They are demanding enhanced flat payments of £250 for rest day working and £275 for working Sundays.

Conductors haven’t been offered a suitable offer but drivers gained an increase of 15 percent for working on their rest days.

Unite union members were to begin a strike ballot this week over pay across all 32 Scottish local authorities. It will mainly involve thousands of workers in schools and cleansing.

It closes on 26 July and strikes could start at the beginning of the new school term. Unite and other local government trade unions have rejected outright a 2 percent pay offer.

Striking Scottish college lecturers in the EIS-Fela are to ballot on the latest pay offer from management.

What began as a pay dispute over the 2021-22 pay round quickly turned into a trial of strength between the union and employers.

A flat-rate increase of £1,000 is now on offer. The real battle to maintain living standards will happen in the 2022-23 pay round.

Workers at the British Council are set to strike on Wednesday, Thursday and Friday of next week. The members of the PCS union are fighting against job cuts and outsourcing.

PCS members are also set to begin a national strike ballot in September over pay and pensions. Workers at the HMRC tax office in Cumbernauld, Scotland, protested over jobs, pay and pensions on Monday of this week.

The workers, in the Unite union, are angry that the company has restored management pay to pre-Covid levels but refused to reverse a 10 percent pay cut for them. The ballot covers around 500 staff and closes on 27 June.

Court is no alternative to workers’ action

A group of parents at Holland Park school in west London have filed for a judicial review against academisation plans, along with the NEU union.

The decision was made by the school’s governors without any consultation with parents or staff. The judicial review claim asserts that this is unlawful.

It comes after strikes at the school—which have yet to make gains—and as union membership is growing. NEU members shouldn’t leave their fight in the hands of the courts, they must consider escalating strikes.

‘Honeytrap’ murder gang member to be freed from prison