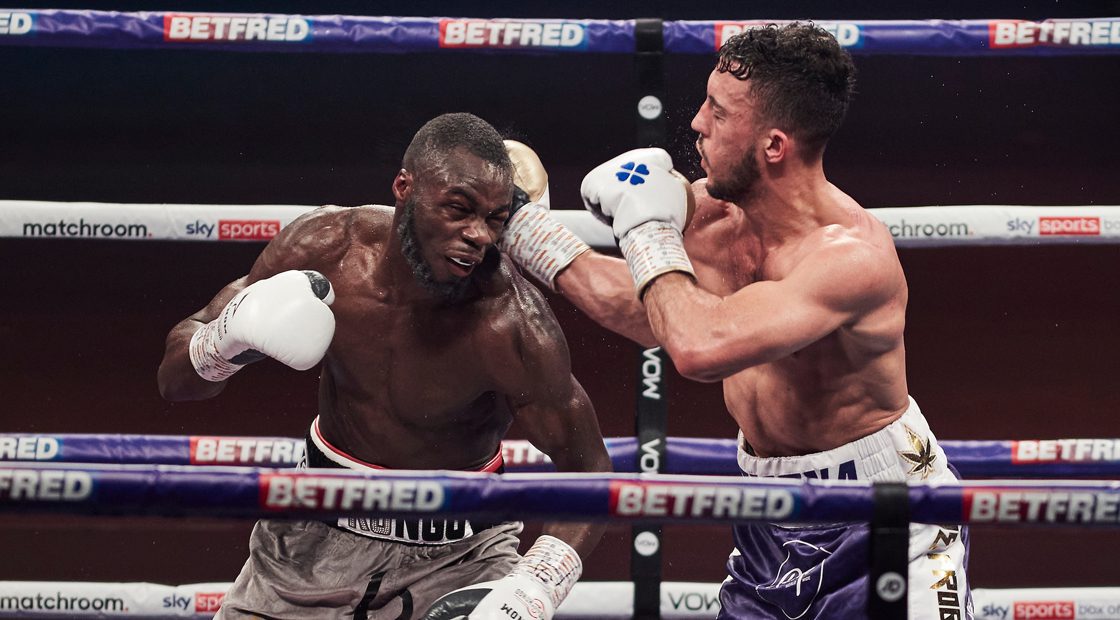 Chris Kongo has insisted his sole focus has been on Sebastian Formella ahead of their welterweight scrap at Wembley Arena next Saturday.

The 29-year-old, whose nickname is ‘2Slick’, says that his trainer Ben Davison feels the German is the ideal opponent for him to produce an impressive statement win.

Formella, 35, has lost two of his 25 bouts but still went the distance in reverses against top American Shawn Porter and Conor Benn.

Kongo, from Bermondsey, has only fought once since losing his WBO Global title to Michael McKinson in March 2021, widely outpointing Kelvin Dotel a year later.

He signed a multi-fight deal with BOXXER, whose shows are screened on Sky Sports, at the start of 2022.

“I was offered the Formella fight around six weeks ago by Ben Shalom [BOXXER CEO] and John Wischhusen,” said Kongo (13-1, seven KOs). “It is my trainer Ben Davison who really and truly has the final say on my opponents. He agreed to take the fight.

“He thinks it is a brilliant fight for me and my career. This should push me up to European or world title level and it will boost up my ranking.

“Formella is a good fighter but we feel that his style is made for me and will make me look good.

“He’s a bit of a mover but does come forward at times. He’s not a counter-puncher. He usually sets a decent pace but sort of slows down at the end of rounds. From what I’ve seen he is nothing special.”

Kongo has boxed 61 rounds since turning professional in 2016.

The points reverse to Portsmouth’s McKinson was the first and only setback since he moved across from the amateur ranks.

“I’ve only looked back at that fight a few times, not too much, because I don’t need to,” said Kongo. “I know exactly where I went wrong.

“I was too patient and played to his game. I’m sure in the future I’ll put that right.

“This is probably the first fight where I haven’t looked at what could come after this. I’ve been zoned in and focused on Formella and not thought about anything else.”

Kongo hooked up with Davison around a year ago, when he was asked to head Stateside to help prepare Josh Taylor for his undisputed super-lightweight unification with Jose Carlos Ramirez in Las Vegas.

“I did a lot of work out there and just liked the way Ben trained fighters,” said Kongo.

“He is so focused on the breakdown and film studies. I’ve never been with a coach who has done those things.

“He’s not taking anything away from me as a boxer, he’s added a lot. He’s made me think more and be responsive, reacting to what my opponent is doing and maybe what he is going to do when I do certain things.

“I was ready to spar Josh whenever he needed that and we did a lot of the training drills together.

“I’m not making any prediction for the Formella fight. I’m going to take each round as it comes. I’m definitely going to show my class and where I belong. It’s a good measuring stick.”

Lions fan Kongo became an ambassador for Millwall Community Trust in May.

“I do a few sessions with kids aged between 12 and 15 and also act as a mentor,” he said. “We talk about their goals and I try and help them, in terms of going somewhere in the future.

“I never really had anyone who was mentoring me. It’s good for me to show them that there is more to life than stuff on the streets.

“I always knew boxing was what I wanted to do and I always stuck by that. It’s about making the right choices.”

‘Honeytrap’ murder gang member to be freed from prison