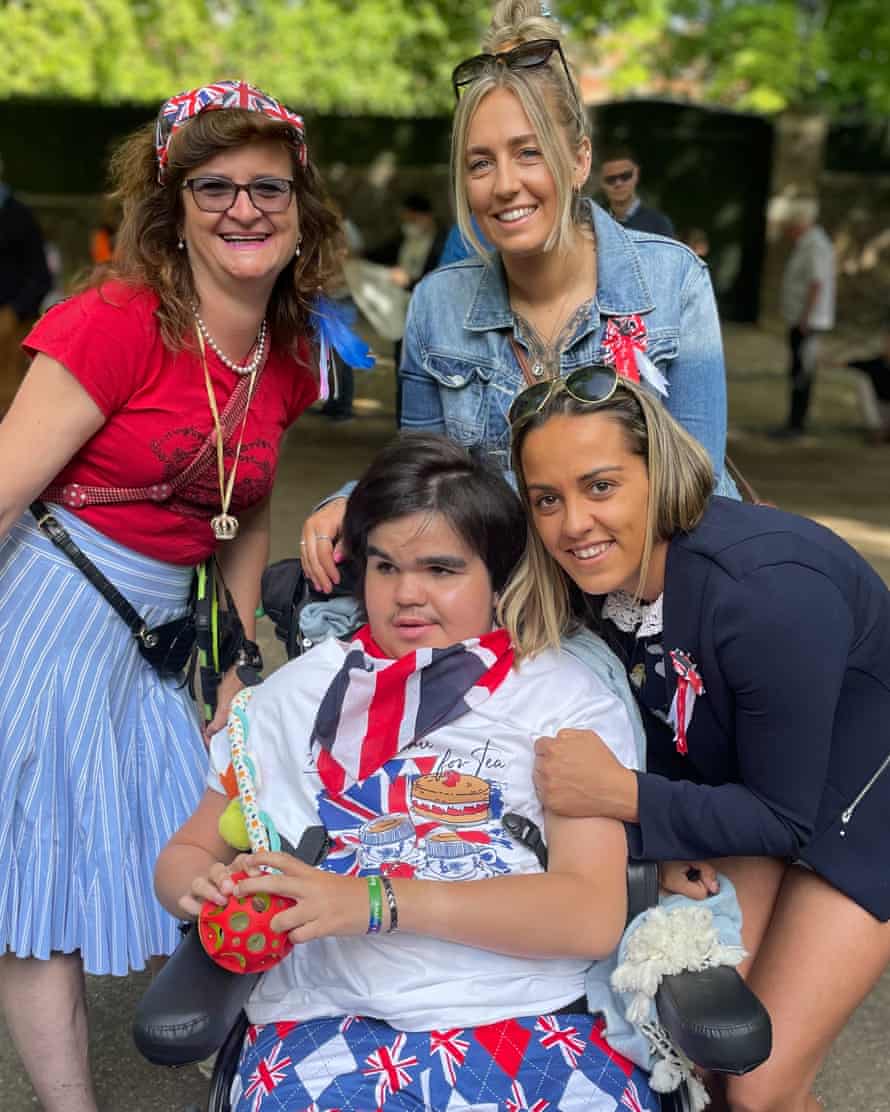 It has been 70 years since Brenda Dalton, 81, last caught a glimpse of the Queen. As a schoolgirl in Northolt, west London, she won the school ballot to watch the Queen’s coronation and saw her ride past in a golden carriage.

Standing on the Mall on Thursday morning, the retired factory worker was hoping for a second chance. “That’s why I wanted to come. I was there that day when she was crowned and I think she’s done marvellous,” Dalton said.

She was one of thousands who turned out in the sunshine to watch the trooping the colour parade kick off a long weekend of celebrations to mark 70 years of the Queen’s reign.

Dalton travelled from her home in Northampton on Wednesday with her sister and their daughters to make sure they got a good spot. She was grateful for better weather than at the coronation. “It was a horrible rainy day and all the schoolchildren stood on the pavements in white T-shirt and shorts and a mac,” she recalled.

For Jon Tarrant-Heckford, 14, from the New Forest, the day was long-anticipated. Jon, who is terminally ill with Sanfilippo syndrome and receiving treatment at Great Ormond Street hospital, is non-verbal, but his feelings about the day were clear. Dressed in union flag trousers, Jon could not stop smiling.

His mother, Lorraine Tarrant-Heckford, 55, said: “We’re normally here for hospital visits but today we’re here for total pleasure.” When she reminds Jon that they are about to see the Queen and aeroplanes, his smile widens. 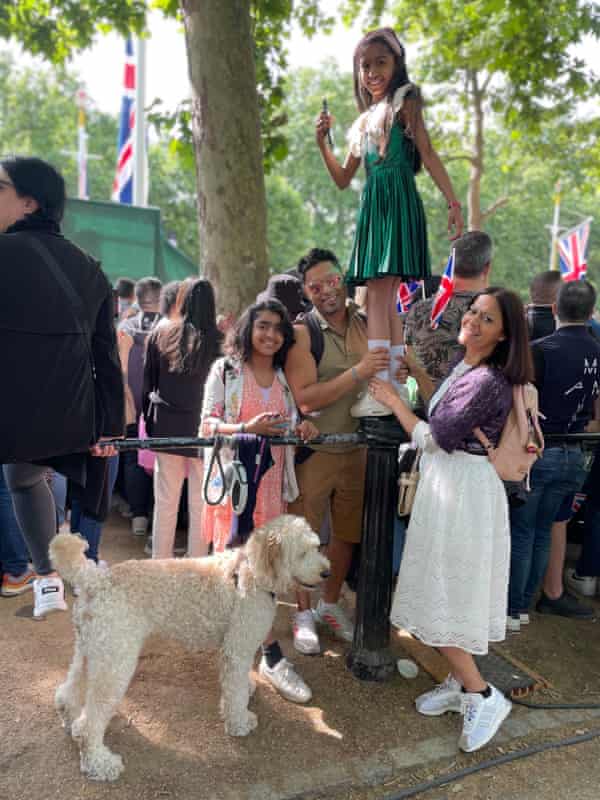 Police restricted access to the Mall as thousands pressed against the railings to catch a glimpse of the Queen and the pageantry. Children climbed on bollards, determined to get a better look, while officers tried in vain to persuade them to get down again.

Raj and Sheets Darji, both 42, drove for five hours from Desford in Leicestershire on Wednesday, with their daughters, Rosie, 12, and Daisy, nine, and their labradoodle Coco. They had never been to a royal event before. “This is never going to happen again, is it,” Sheets said.

Daisy, in her best green satin dress, was perched on a bollard determined to see the Queen. Others had camped out all night to ensure front row seats.

Sonia Petts, 59, a security supervisor from Northampton, was right at the front at the Buckingham Palace end of the road. She and her sister Cherie had been sitting under a picnic blanket since 9.30pm on Wednesday. “We weren’t intending to camp. It did get a bit cold at about one or two o’clock in the morning. But 70 years is a big thing. The Queen’s amazing and she isn’t getting any younger.”

Becca Coker, 39, was watching in the stands with her husband, Tom Coker, 40, a major in the Royal Dragoon Guards. They travelled from Steeple Aston in Oxfordshire to see the parade.

They were excited to be part of it. “My dad marched in the Queen’s coronation and our two-year-old is obsessed with her,” she said. “It’s a really positive thing after the last few years of Covid.”

Nurse Sarah-Jane Turner, 39, and IT worker Richard Turner, 41, travelled from Walsall with their daughters on Wednesday to try and ensure a good spot. They sacrificed their own view of proceedings to let Charlotte, seven, and Penelope, five, catch a glimpse. “We want to see the Queen!” they said, dressed in matching union flag dresses.

Held up on a railing near Buckingham Palace while their parents faced the wrong way, the girls reported back what they could see. Mostly that was the tops of soldiers’ heads and the odd police horse, though they did get a fleeting look at Camilla and Kate drive by in a carriage.

The crowd was so dense that they only noticed that the Queen was out on the balcony when they finally got a view of a live screen. “Good old TV eh?” said Richard.

Others simply found themselves in the right place at the right time. Caroline Hearn, 43, a teaching assistant from Horton Heath in Hampshire, had chosen Thursday to take her husband and sons on a sightseeing trip in the capital because the weather looked good.

They happened to be standing on the edge of Green Park when Prince Charles and Camilla walked over afterwards to meet the public. After they shook her hand, Caroline jumped and down with excitement squealing: “It’s the future king! He spoke to me!”