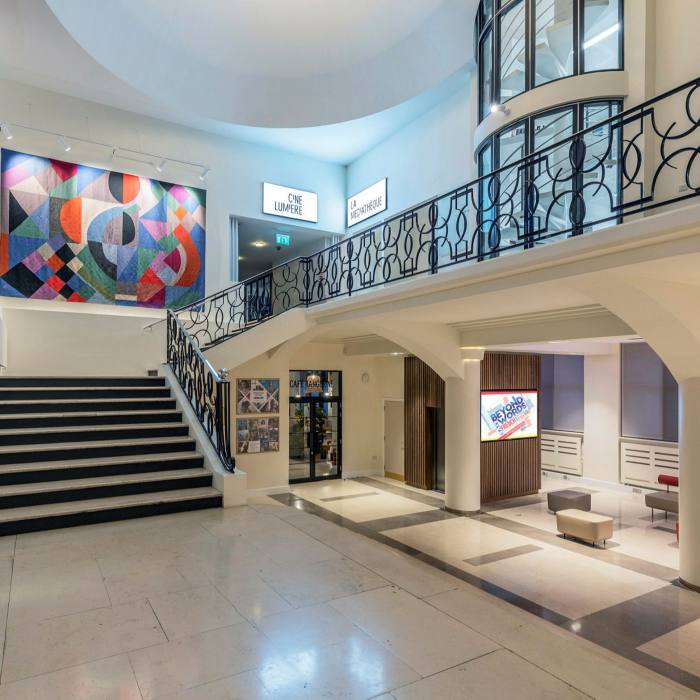 A city break for film lovers: imagine that. You can tour the real locations of classic scenes, of course. But a purer sort of fun is to be had in actual cinemas. In London, it would be a straightforward joy. Over a long weekend in the dark — Friday lunchtime to Sunday night — the only snag with watching a film at three different independent, characterful movie houses each day would be the question of which to leave off your list. The capital is rich with them, each with its own heady ambience, suiting a particular point of day or night. And en route between them, a certain understanding of London takes shape too.

So then: three days, nine cinemas and not a streaming service in sight. Call it your own private London film festival. 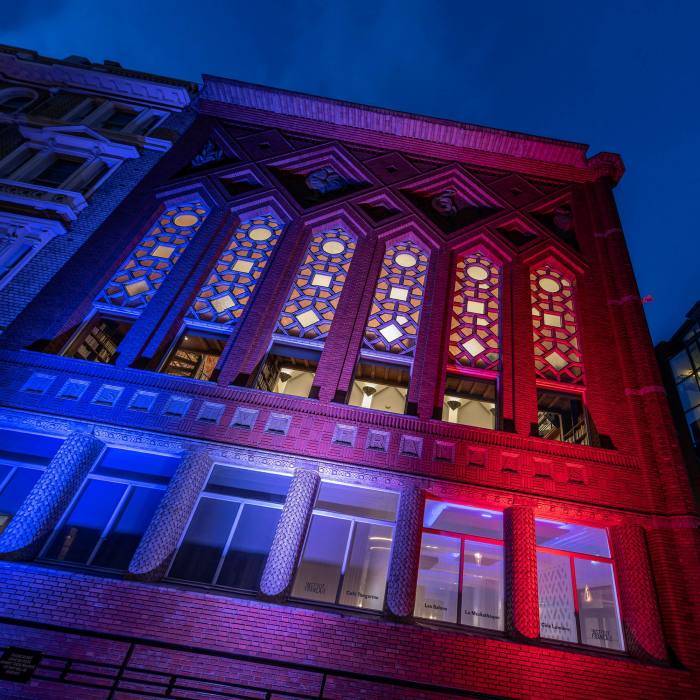 It might feel perverse to begin a tour of London cinemas as if you were in Paris. But on a Friday lunchtime, the city offers nowhere better to see a film than the Art Deco home of the Institut Français, set in South Kensington museum land. There you will find Ciné Lumière, smartly appointed powder- blue seats gazed down on by exclamation mark windows fitted with blackout blinds for screenings. (Secondary glazing also deals with the sound from the playground of the adjacent Lycée Français.) Naturally, high-profile new French cinema fills the programme. Who would expect otherwise after Catherine Deneuve officially opened the place in 1998? But the movies playing also come from across the world, helping make Ciné Lumière a definitively London experience: an international cinema for an international city. (Website; Directions) With its honeycomb ceiling and wall sculptures, Screen One of the Curzon Mayfair is a Kubrick-esque marvel © Alexis Stavrides

What happens next depends on the weather. In a perfect world, stay on foot. That way you can stroll through Hyde Park before an early Friday evening spent in singular glitz. Curzon Mayfair is part of the Curzon chain, but also a picture palace wholly unto itself, tucked between Park Lane and Shepherd Market. The exterior is a striking slab of Grade II-listed modernism finished in 1966 (although a cinema was built on the site in 1934). Inside, the larger Screen One is a Kubrick-esque marvel. Cave-like wall sculptures by muralist William Mitchell surround the vast screen; the ceiling is a honeycomb of futuristic light panels. The place feels like nothing so much as a movie set itself. It can almost seem a pity when the lights go down. (Website; Directions) 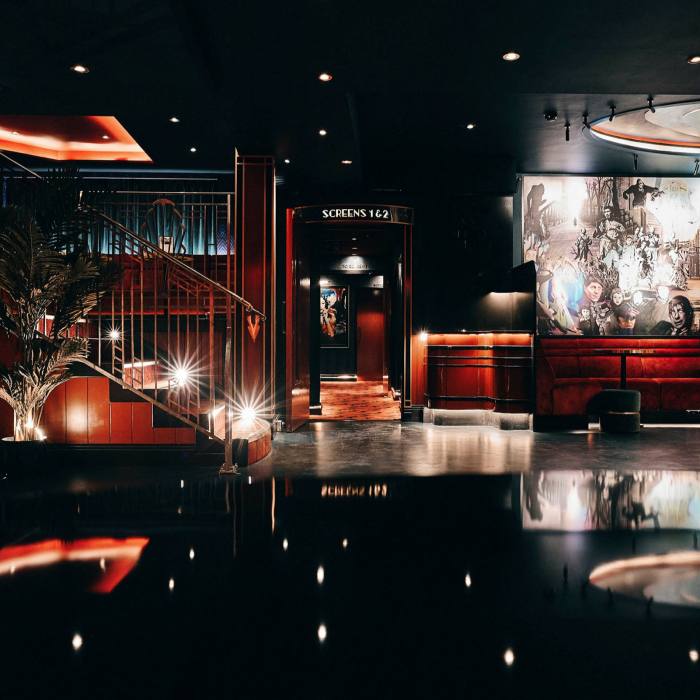 The luxe scarlet interior of The Garden Cinema 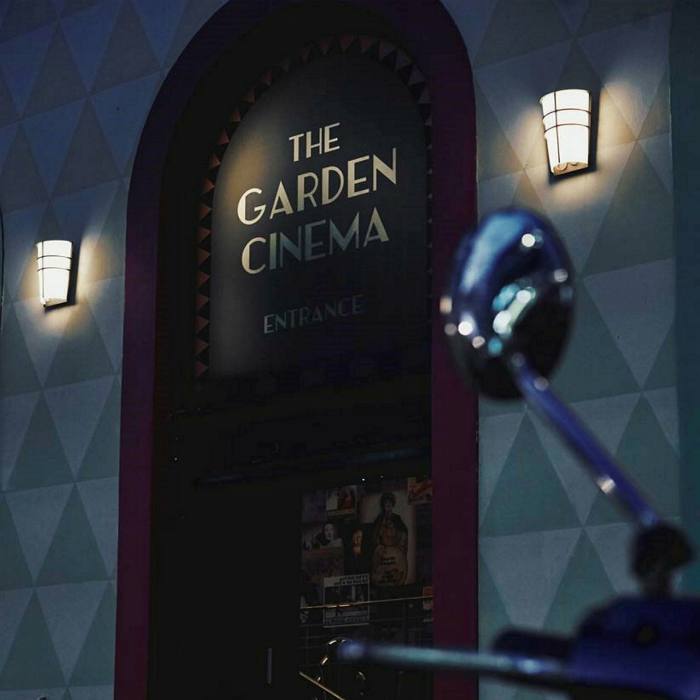 The Garden is London’s newest cinema

A trip to Curzon Mayfair should be followed by one to London’s newest cinema, across Soho and into Covent Garden: The Garden, positioned on a side street off Drury Lane. This lustrous picturebox only launched in March (the owner is legal directory publisher Michael Chambers). But the novelty comes spliced with a rich sense of history — of film itself and the surroundings it is best enjoyed in. A luxe scarlet interior is matched by a programme that mixes the best new releases with burnished classics: The Garden opened with a Marlon Brando season, and is about to feature a celebration of Anna Magnani. Just as importantly given our mission, two state of the art screens are accompanied by a bar just made for Friday nights. (Website; Directions) 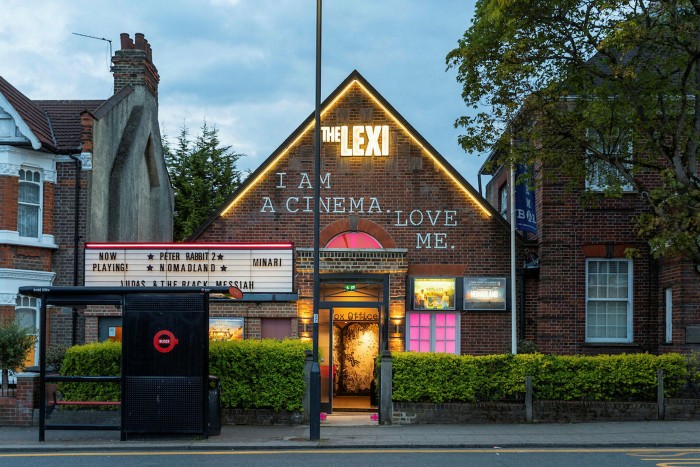 “I Am A Cinema. Love Me” reads the legend painted on the face of The Lexi. That much is easy. Tucked away in Kensal Rise, the cinema was opened independently in 2008; ever since it has been a treasure for north-west London and beyond. Volunteer-run, it is the city’s only social enterprise cinema — all profits go to the Sustainability Institute, a South African education charity. It also makes a charming place to see a movie, with knockout screening spaces, a brimming programme and a host of initiatives designed to spread the passion for movies. Not even a damaging fire in 2020 stopped the projector for long. With the building now repaired and restored, one of the most admirable stories in London film rolls on. (Website; Directions) 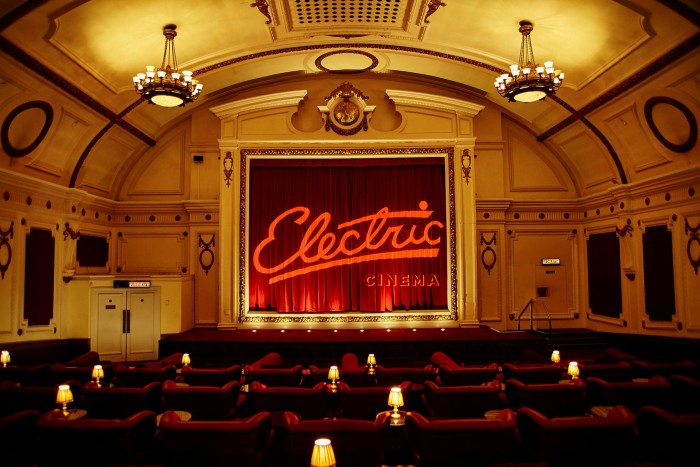 The Electric’s evolution has mirrored that of its neighbourhood, Notting Hill

Visit The Lexi on a Saturday lunchtime and afterwards you can saunter down Ladbroke Grove towards the late afternoon hubbub of Portobello Market. Further into Notting Hill is a 1911 vintage, The Gate, but on Portobello Road itself is the Electric, another grand old venue and one that tells a tale about modern London history. Once a famously bohemian fleapit that specialised in arthouse and all-nighters, it is now a luxe fixture in a transformed part of town, the single screen dressed with plush armchairs and velvet-trimmed double beds. (Full disclosure: my 13-year-old self used to sneak into the Electric to watch Repo Man and Mona Lisa. There were no beds back then. There may have been bugs.) (Website; Directions) 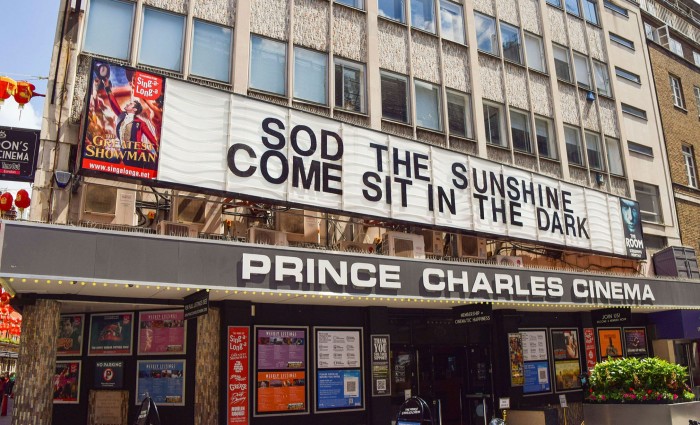 For the film lover loose in the capital later on a Saturday night, all roads will lead to the Prince Charles. Set on a cut-through between Chinatown and Leicester Square, one of the last of true independents in central London always feels like a mischievous retort to the red carpet premieres staged nearby. Opened in the ’60s and enjoying a deeply insalubrious past, in recent decades it has become a landmark. The programme is heavy on cult favourites; the seats arranged in a unique curved soap-dish design; the atmosphere the kind you might expect a sightseeing Quentin Tarantino to wander into. As a confirmed fan, he might. (Website; Directions) 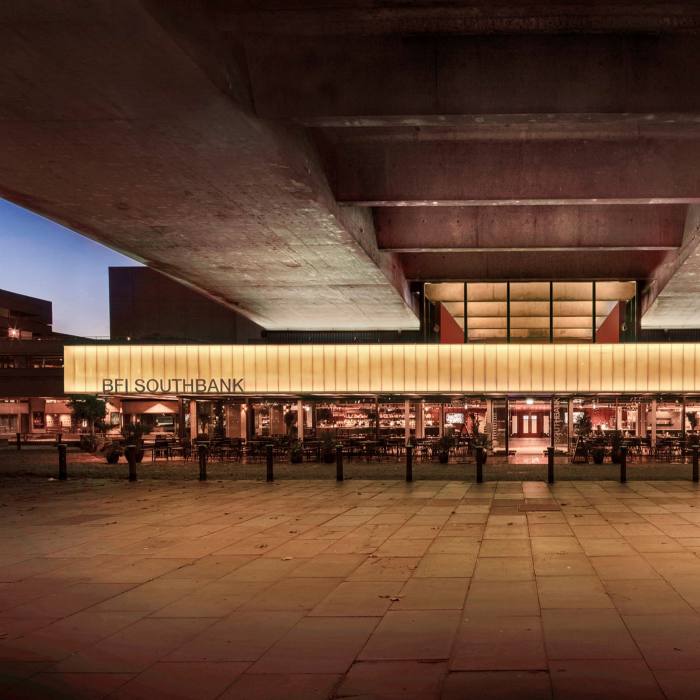 The one-time National Film Theatre is located beneath Waterloo Bridge 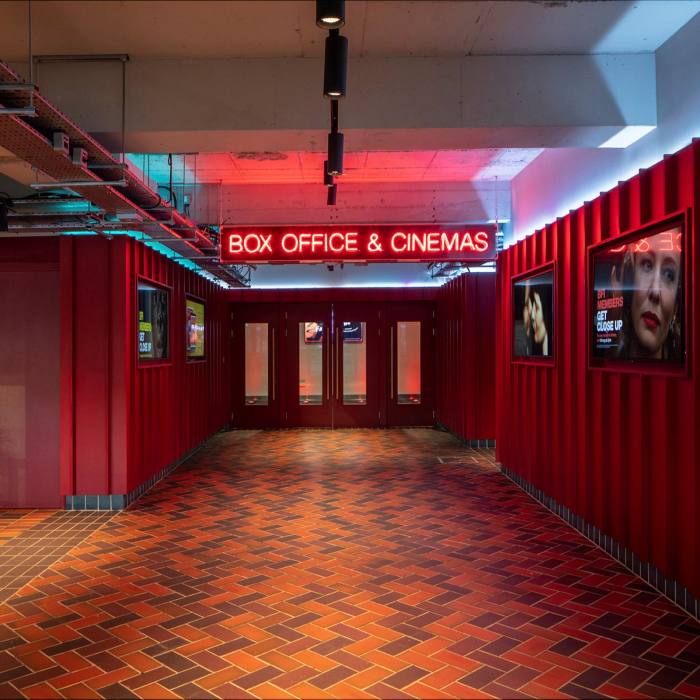 As well as four screens, BFI Southbank has a cinema library and shop © BFI/Luke Hayes (2)

On Sunday morning, tradition may bring you to the BFI Southbank, stowed under Waterloo Bridge and a fixture on the river in various forms since 1957. It was known for decades as the National Film Theatre, and a kaleidoscope of movies still play in the four screens. The library and shop are further lures for cinephiles; the adjacent bars and restaurants draw in everyone else. (Website; Directions) 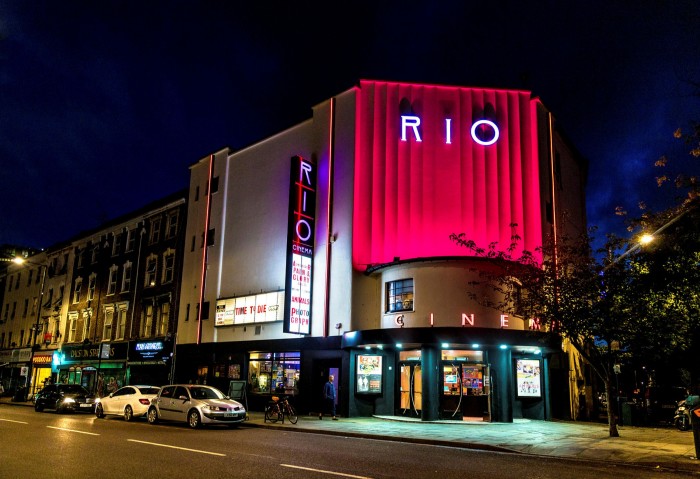 Later on Sunday afternoon, cross the Thames and make your way to Dalston and living London history in the form of the Rio. A cinema since 1909, it was first opened by businesswoman Clara Ludski. Then came bomb damage in the Blitz, a slump in the ’60s and community-led revival in the late ’70s and ’80s. Now it thrives again. The two-tier Art Deco interior remains as a connective thread to the past, painted in signature pink and blue. The present delivers a programme that is always worth your time in a soulful mainstay of the London film landscape. The future beckons too — there are plans for the Rio to become London’s first solar-powered cinema. (Website; Directions) 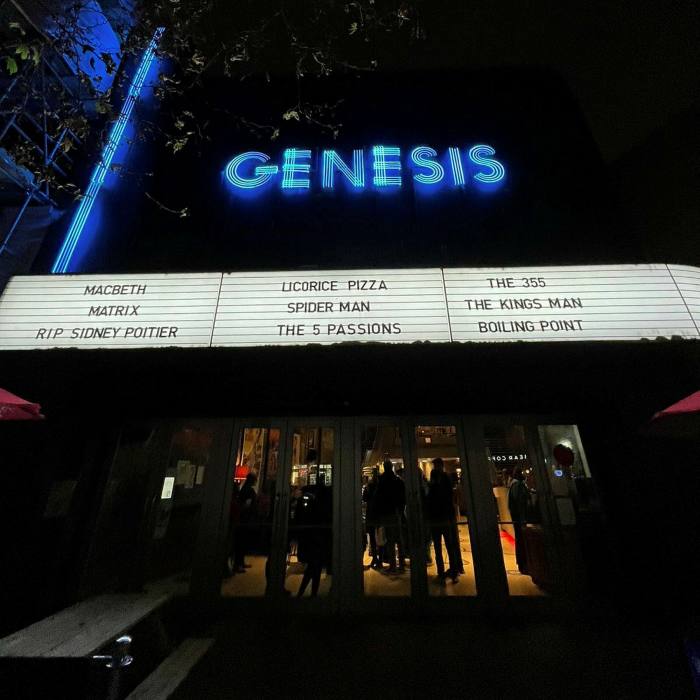 Bought in a state of neglect in the late 1990s, the Genesis is today one of the landmarks of east London’s cinema scene

To end our long weekend we stay in east London, where we close with another piece of history. The Genesis in Whitechapel was once a music hall that played host to Charlie Chaplin; later came a long stretch as a much-loved East End picturehouse before a tumble into disuse. But the 21st century has seen a glorious third act. After it was bought in a state of neglect in the late ’90s by enterprising local Tyrone Walker-Hebborn (whose parents once courted in the back rows), years of careful, intelligent renovation have made the Genesis a model of what a modern cinema can be. Five handsome screens each have their own personality; the result is a hub for the area and a dream palace for Londoners everywhere. (Website; Directions)

Do you have a favourite London cinema? Tell us in the comments 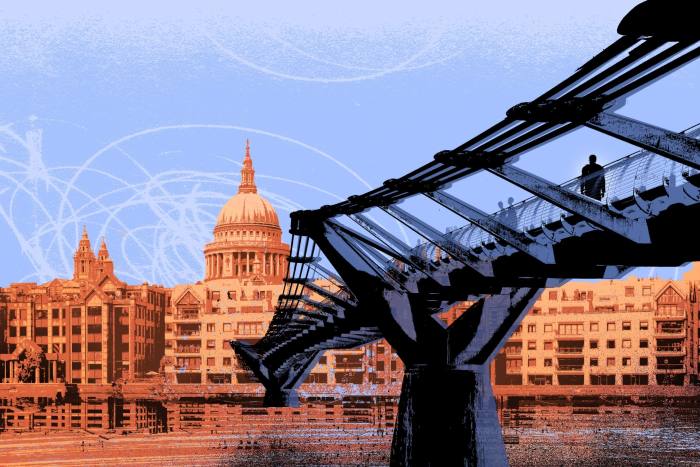 Walthamstow thief who stole £100,000 worth of goods jailed