An East London man has had his van crushed and been issued a curfew after being caught fly-tipping not once but twice by Barking and Dagenham Council. Florian Gigel Mircea, from Ilford, was brought to justice after being tracked down by the council for fly-tipping offences which date back three years ago.

On the September 30 2019, the council’s Environmental Enforcement team discovered a large fly-tip on River Road, Barking, weighing approximately one and a half to two tonnes of waste including loose, bagged and bulky waste. During an inspection of the waste, officers found a box that contained a delivery note addressed to a person in Ley Street, Essex.

Officers found and visited this person, who admitted that half of the waste was his and that he had paid a so-called “man with a van,” named Florian, to dispose of the rubbish. As the resident of Ley Street didn’t check the credentials of the “man with a van” and only had a name and phone number, he was issued with and paid a £200 fine.

READ MORE: Boy, 12, ‘rushed to A&E in agony’ after ‘being attacked by bullies’ at East London school

The case was heard at Barkingside Magistrates Court where the defendant was issued with a Community Order which ordered that he be put under a curfew and would have to wear a tag
(Image: Google Maps)

An enforcement officer then called the number provided by the Ley Street resident and spoke to a male who confirmed his name was Florian. The officer explained that the council was investigating waste that they had found illegally dumped in the borough and that they had evidence that he had collected the waste.

During the conversation, Florian admitted that he had collected the rubbish, but had then passed it onto other people. However, when the officer asked for more details and for him to come in and explain his side of the story, he said he had to go and hung up.

Later, the council received footage from a resident, which shows two males fly tipping a large amount of waste from the back of a van on Castle Road, Dagenham. On the side of the van, there was a phone number, and an eagle-eyed officer recognised the number to be same number that belonged to Florian, “the man with the van”.

Relevant checks were made on the vehicle and officers were able to trace Florian’s full name as Florian Gigel Mircea and his home address in Lowbrook Road, Ilford. As a result of this, enforcement officers alongside the police attended the Ilford address on November 13 2019 at 7.30am and identified the vehicle. A short time later, a man exited the home the van was parked outside of, and officers identified him as the man from the fly-tip footage.

After the man had confirmed it was him in the photos, he was told they could be seizing his vehicle in accordance with S.34(B) Environmental Protection Act and that the council will be prosecuting him. The case was heard at Barkingside Magistrates Court on May 2, 2022, and the defendant was issued with a Community Order which ordered that he be put under a curfew between 7pm and 7am at his property for one month and he would have to wear a tag, so his movement could be monitored. He was also banned from driving for one month and ordered to pay costs £390.

Mr Mircea has had his van crushed to ensure that it is not used in the future for fly-tipping. Councillor Syed Ghani, Cabinet Member for Enforcement and Community Safety said: “This is a fantastic result from the council’s enforcement officers. This individual has been caught fly-tipping twice and paid a costly price. This shows we will use all the powers we have to take action against those who want to dump on our streets. I hope this serves as a deterrent to others.”

If you have a story you think we should be covering, feel free to email [email protected]

To keep up-to-date with all the latest London news, sign up to our newsletter here 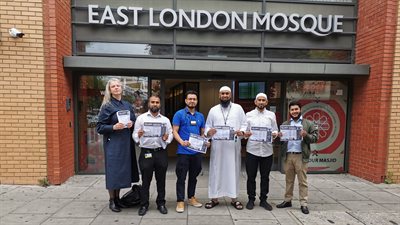