Cutting right across the heart of the USA, Route 66 is a 2,400-mile highway, starting in Chicago and finishing in Santa Monica, Los Angeles.

It is one of the most famous roads in the US, celebrated in song, film and television, after it served as a route for those looking to migrate to the west of the country.

Kicking off on 1 June, CSS and SDL are challenging 20 individuals from both businesses’ academies to try and get as far along Route 66 as they possibly can over the course of the month by walking, running, cycling and swimming.

The progress of both teams will be captured via the Strava app, plotted on the Route 66 charity map, with updates posted on Instagram, LinkedIn and Twitter under the hashtag #SDLCSSRoute66.

At the end of the month, the academy that has carried out the most miles will be declared the winner in this head-to-head battle.

Sarah Chalmers-Stevens, head of professional development at CSS, said: “We recognise the importance of bringing new talent into the surveying industry and have successfully trained over 200 individuals over the last 10 years, who are now AssocRICS qualified and enjoying fulfilling roles as residential surveyors.

“This initiative between our two training academies is obviously a bit of fun, but also highlights the importance we both place on our academies, plus supports a charity close to our hearts, LionHeart.”

“The SDL Academy supports surveyors at all levels: from trainees hoping to achieve their AssocRICS, right through to APC candidates and more experienced professionals looking to attain their FRICS accreditation. It’s great to see both of our academies come together for this challenge – with a small amount of friendly rivalry – to encourage the next generation of surveying talent to shine, while also raising money for a fantastic cause in LionHeart.”

Both teams are raising money for LionHeart, and donations can be made on the specific Route 66 Just Giving page, accessible at: https://www.justgiving.com/fundraising/css-sdl-route66challenge

Savills: The agency brand’s London Development Land team walked more than 26.2 miles to raise funds for the humanitarian crisis in Ukraine on 19 May. 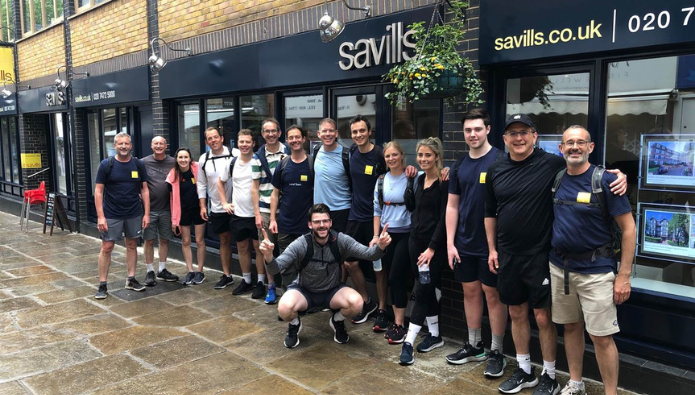 Darren Arnold, Savills London Development Land director comments, “It was great to take on a challenge to raise funds for the crisis in Ukraine, as well as getting to visit Savills colleagues across London.”

Tim Whitmey, Savills Central London Residential Development director, said: “The walk took us 11 hours and was completed by 13 team members. We originally set a target of £25,000 and are thrilled to have already reached that, we have now raised our fundraising goal to £30,000.”

More than £26,000 has been raised for the British-Ukrainian Aid, a charity supporting those suffering from the ongoing war and humanitarian crisis in Ukraine.

Find out more and donate: https://www.justgiving.com/fundraising/land-team

Caerphilly Keys: Members of the team behind private sector leasing scheme Caerphilly Keys joined forces on 15 May to raise more than £1,450 for the Motor Neurone Disease Association.

Eight members from across the Caerphilly Keys team, including officers and landlords, took part this year’s Bryn Meadows Caerphilly 10k.

The team selected the Motor Neurone Disease Association as its chosen charity following one of the scheme’s first landlords being recently diagnosed with the condition.

Caerphilly Keys, launched by Caerphilly County Borough Council, aims to prevent homelessness by matching tenants to suitable private rental properties, then working to support both the tenant and landlord to ensure the tenancy is sustained.

Dave Street, the council’s corporate director of social services and housing, said: “Congratulations to everyone who took part and thanks to all of those who generously donated.

“This is an incredible achievement which I’m sure will be gratefully received by the Motor Neurone Disease Association.

“Caerphilly Keys has grown from strength to strength and helped house many people who would otherwise have found themselves homeless.

“Partnership working really is vital to the project’s success and the team has demonstrated through this challenge that these relationships extend much wider than simply day to day working.”

Find out more and donate: www.justgiving.com/team/CaerphillyKeys10k

Agents Giving: Tight on time but want to do your bit for charity? Agents Giving has launched a  Supporters Scheme.

Do you want to do more charity work but struggle to find the time to organise fundraising events? Then why not sign up to be an Agents Giving Supporter and help us to fundraise for charities all over the UK?

Show your support to the industry charity Agents Giving and join a network of estate & letting agents & property industry suppliers, across the country, all doing their bit for charity.

For an annual fee of just £99, agents can become an official Agents Giving Supporter.

The money will go towards the many UK charities who benefit from Agents Giving support as well as getting behind the Property United for Ukraine campaign for DEC charities.

You will receive a copy of the Agents Giving Supporter logo to use on your website and in your marketing and PR as well as a certificate for your office or window display.

Find out more at: https://agentsgiving.org/agents-giving-supporter-scheme/

The deadline for the Agents Giving Fundraising Champions awards has also been extended to 6 June, giving a bit more time for entrants and nominations to be taken.

The winner will be announced at the Agents Giving Charity Ball, sponsored by Callwell and supported by Nurtur and Atlas Displays, on 15 July at the Epsom Downs Racecourse in Surrey.

You can enter the awards or nominate someone you know who has carried out some extraordinary good deeds for charitable causes in their local community or has undertaken a fundraising challenge for charity on the Agents Giving website.

The award categories are:

SDL Auctions: We are giving a special mention to SDL Property Auctions founder Rory Daly who passed away last week after a brave battle with illness.

During his career, Rory raised over £1.5m for various causes via regular charity auctions and once conducted an auction in the presence of royalty.

He had more than 30 years’ experience as an auctioneer in the property sector and was chief executive of CPBigwood prior to its acquisition by the SDL Group in 2015.

During this time, Rory was known to be a champion of all things, and all people auctions – in his own words: “Auctions and I suit each other. We’re both very similar – straightforward, no time wasting, just honest and transparent.” His knowledge and passion for the sector will be greatly missed.”

His other great passion was West Bromwich Albion FC where he was a season ticket holder.

Estate Agent Today sends its deepest condolences to his family and friends.