Hail ‘the size of chickpeas’ hit London and the south east today, after the Met Office said incoming thunderstorms could hit some parts of the country.

Londoners were left running for cover as the city experienced loud rumblings of thunder and heavy rain in quick downpours.

Tea Francis, from Hemel Hempstead, had his sleep disturbed by a ‘loud thunder clap’.

‘I was trying to get a quick nap in when I heard a pretty loud thunder clap and heavy rain starting to come down’, the 38-year-old jeweller said.

‘Then it got ridiculously heavy and loud so I got up to have a look. By the time I stopped filming it and came downstairs, it had stopped, but the hailstones which were maybe the size of chickpeas were in small drifts up against the wall of the house.

‘Amazing for a shower lasting maybe a minute and a half tops. I’ve seen weather like it before a handful of times over the years but not usually this late in the year and this stands out as being one of the more extreme cases purely because of how much hail was on the ground.’

Met Office meteorologist Alex Burkill said the weather was caused by air rising up from the surface and creating large shower clouds in a process known as convergence.

‘We have plenty of showers that have developed across the UK, and the focus of those showers has pushed eastwards as we’ve gone through the day’, he said. ‘We have seen some hail, some thunder, and some lightning.’ 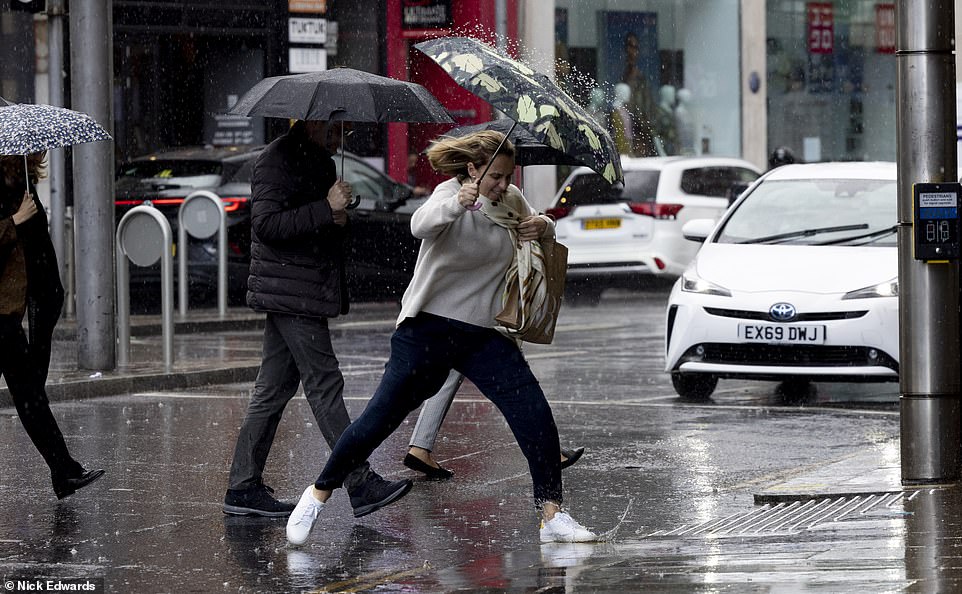 A woman in Kensington, west London, leaps over a growing puddle with her umbrella as rain hits the capital this morning 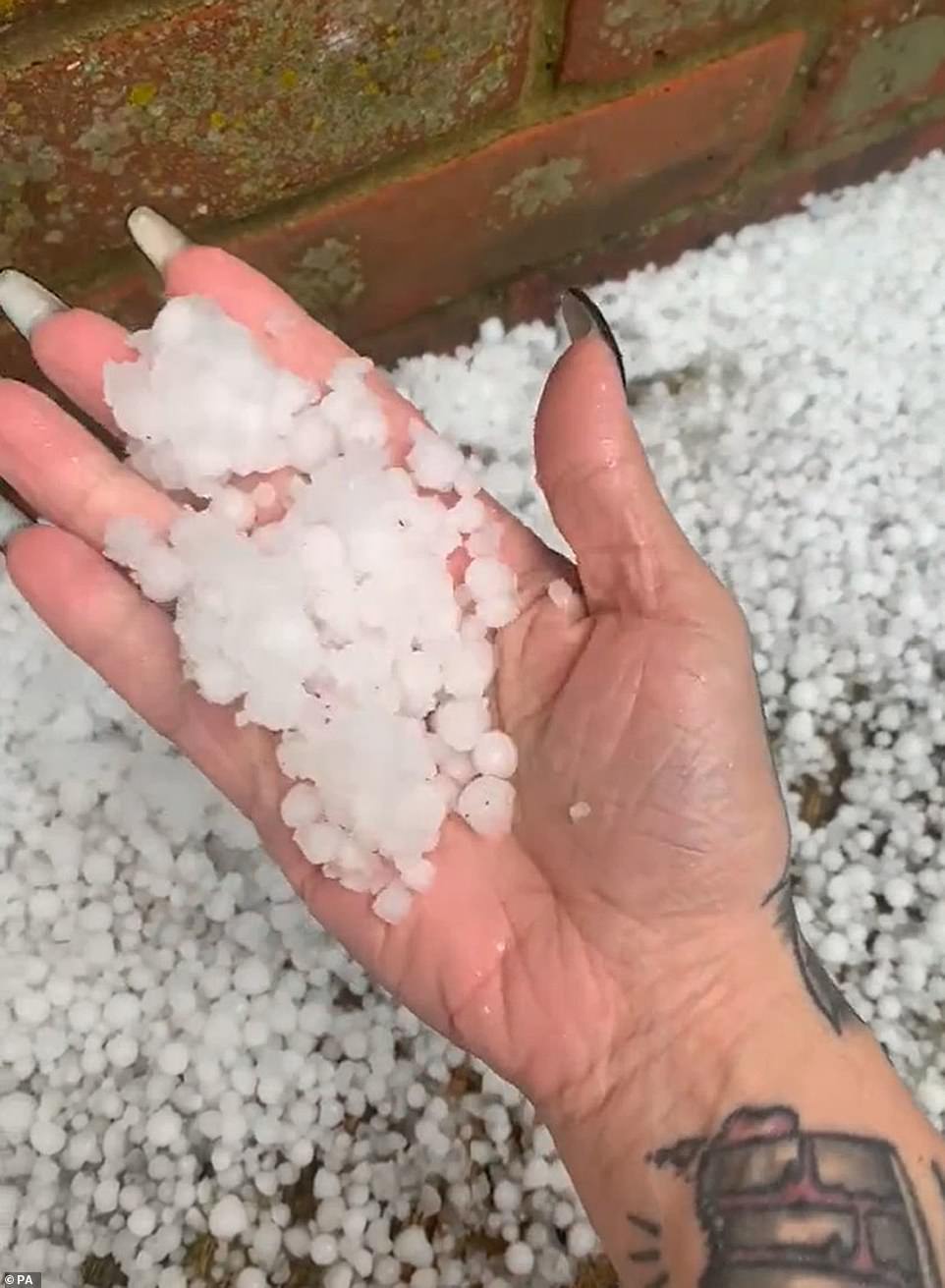 Tea Francis, from Hemel Hempstead, said hailstones ‘maybe the size of chickpeas’ were in small drifts up against the wall of their house 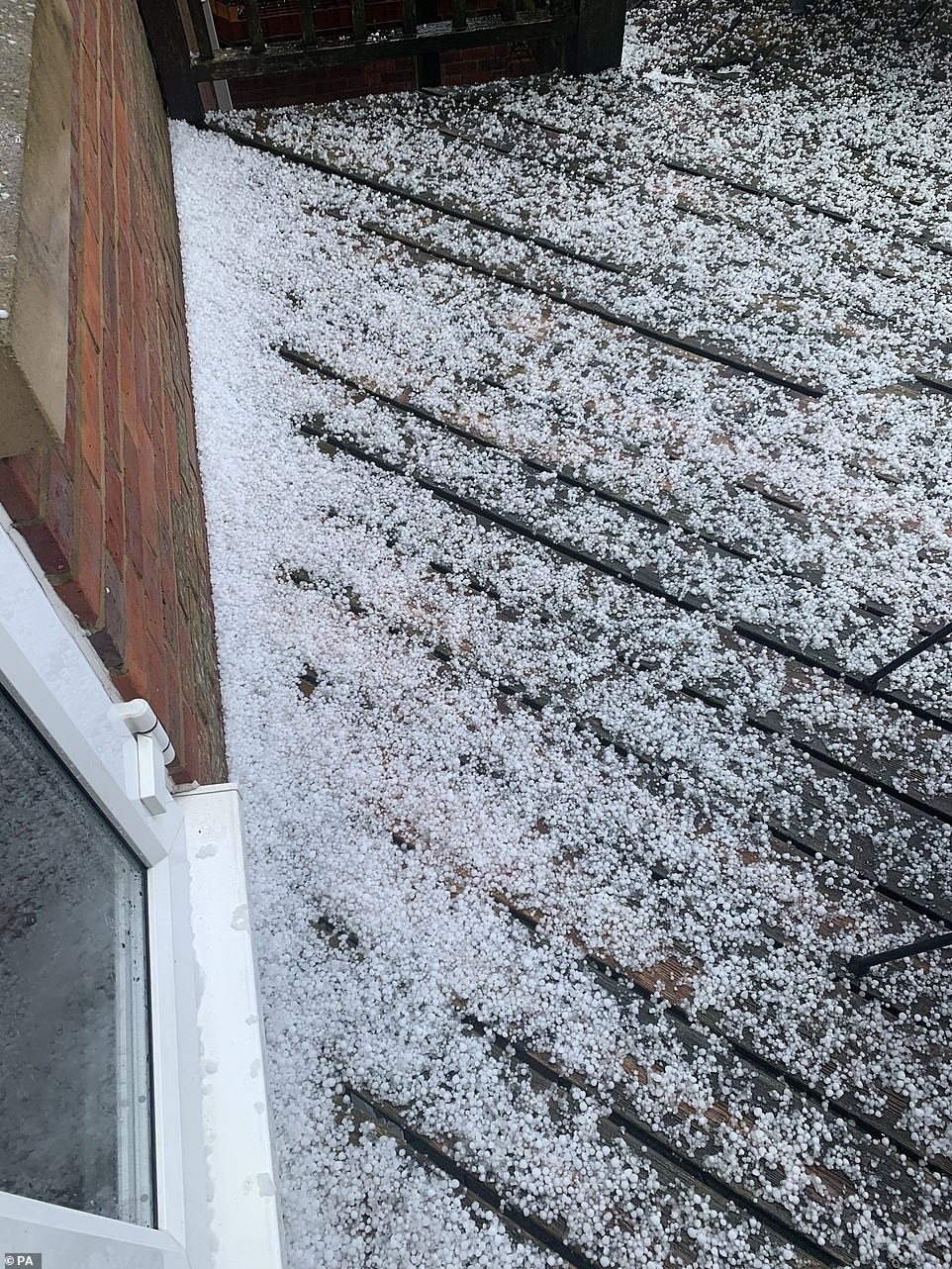 The hailstones fell for ‘maybe a minute and a half’ in Hemel Hempstead todays, as storms brew across the country

Mr Burkill said a funnel cloud, caused by movement in the air combining with the large storm clouds, has been seen off the coast of Kent.

However, he said it would not have been any worse than a ‘strong gust of wind’.

‘Even if it had come down to the ground it would have been quite a weak feature,’ he said.

Mr Burkill said the wet weather is due to continue until the early hours of Wednesday before clearing up.

This morning, short thundery downpours with hail were been reported in the south and southeast of the country, as unsettled weather moves across the UK bringing spells of rain and gusty winds. 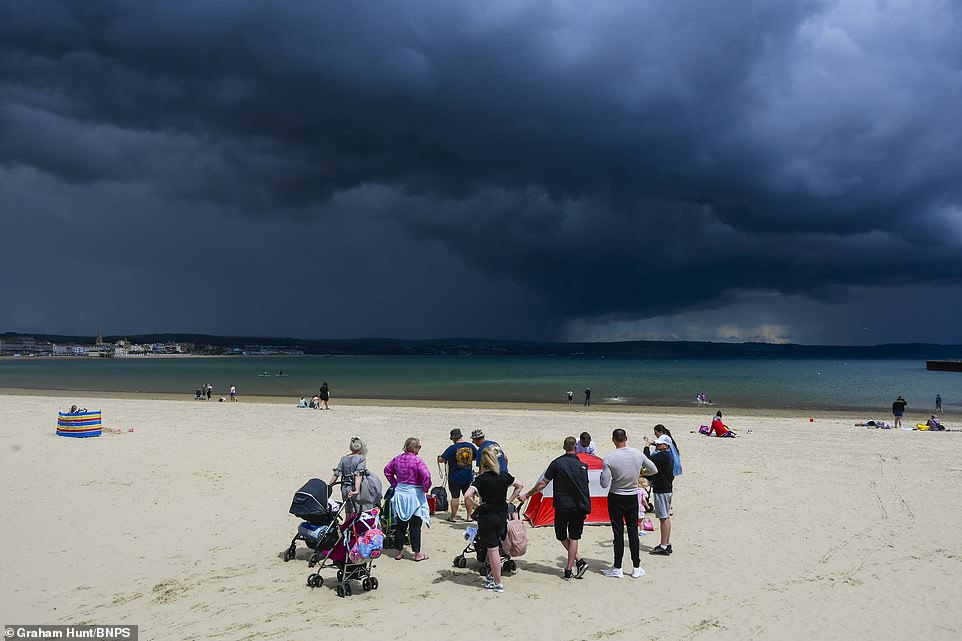 Think dark clouds roll in over the sea at Weymouth in Dorset, as beachcombers stop and stare at the developing rain storm 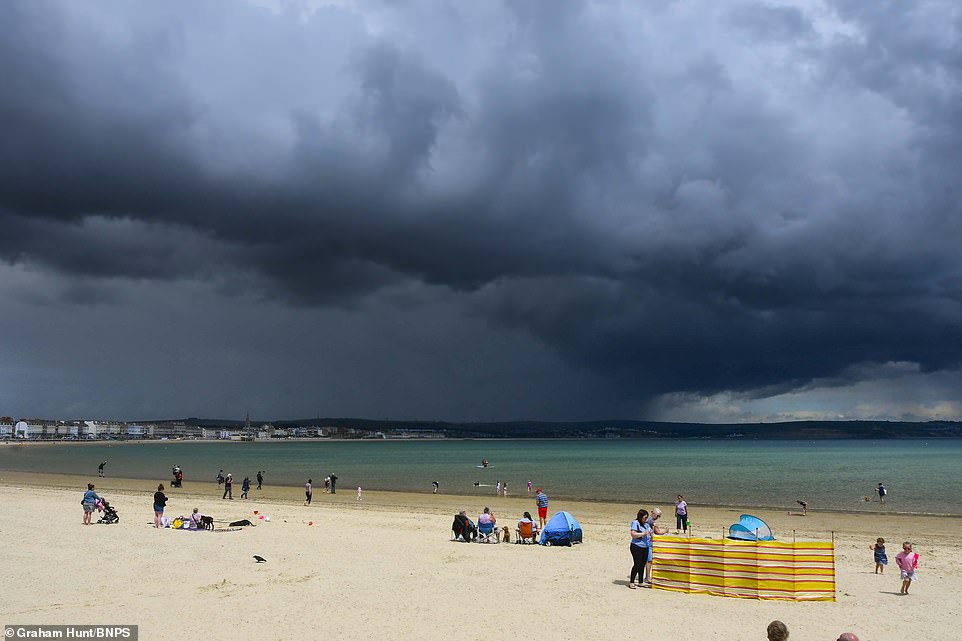 Dark clouds in Dorset break and release rain on the horizon, as localised storms hit the country, with thunder and hail in some places

The Met Office warned that some of the showers would be heavy and mixed with hail, and Brits shouldn’t be surprised if they hear a rumble of thunder.

Around lunchtime today, it was reporting heavy and thundery rain in central and southern England, with widespread showers across the UK. People were seen dashing for shelter from the hailstones in Westminster, London.

Met Office forecaster Grahame Madge told MailOnline that drier, sunnier conditions would appear this afternoon, with showers fading in the east and central areas of the country.

‘The west will remain cloudier, and there may be locally heavy rain in northwest Scotland,’ he added. 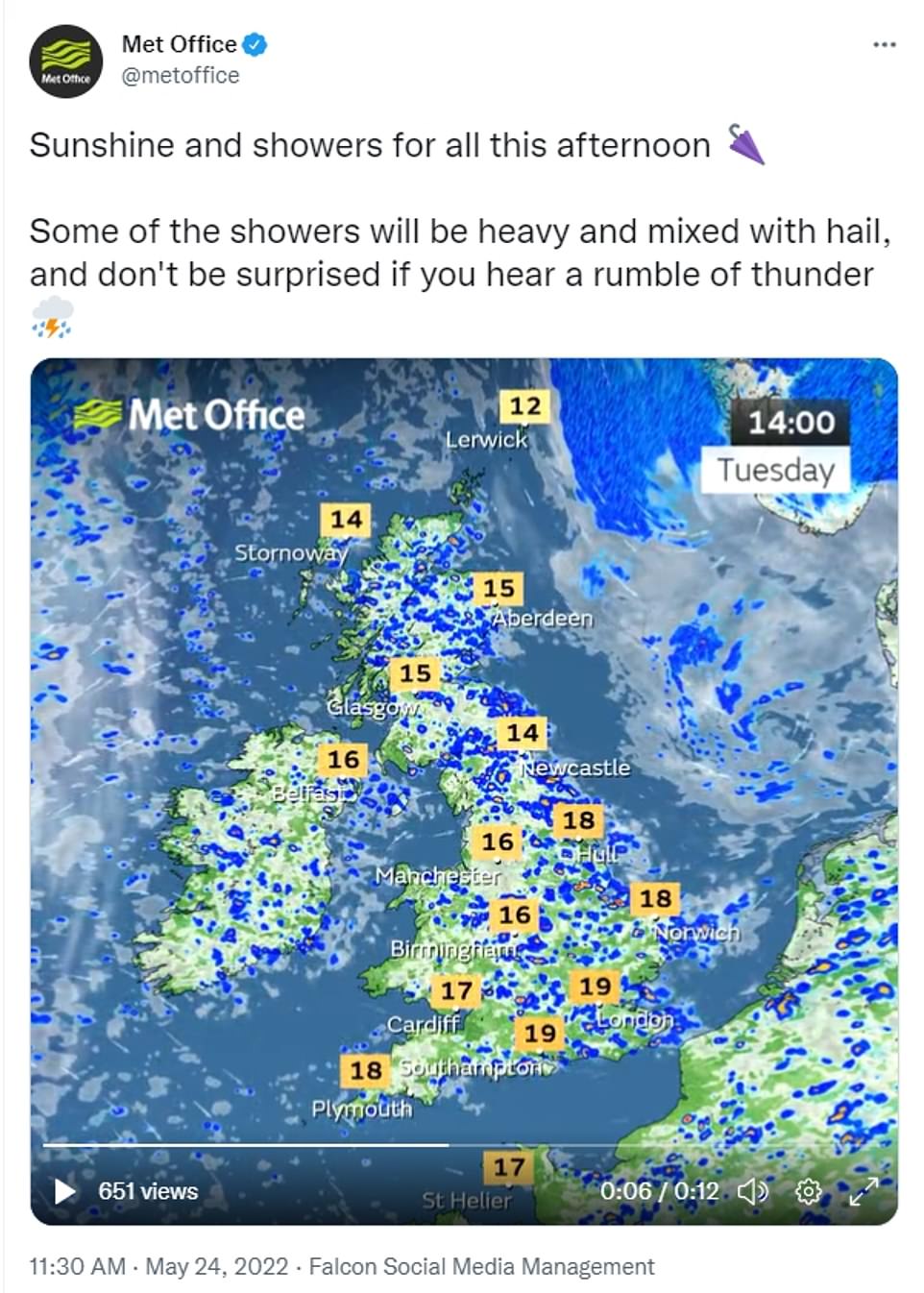 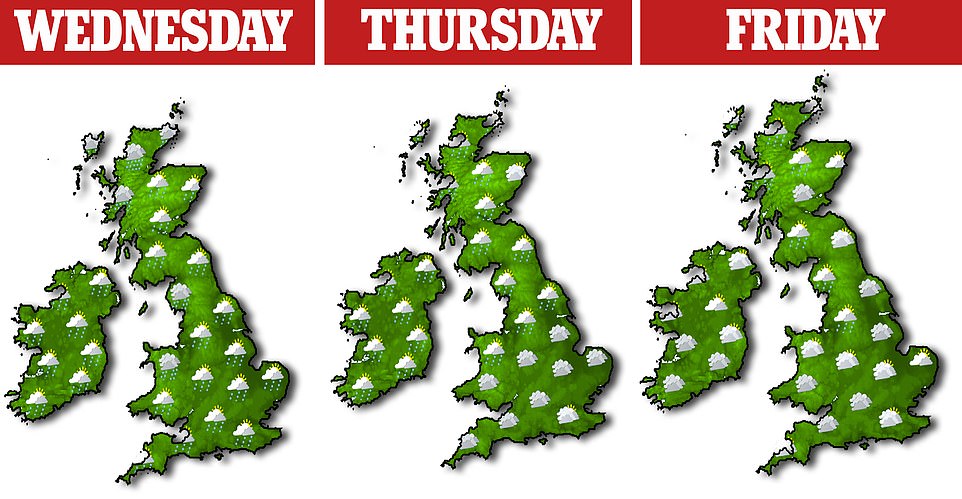 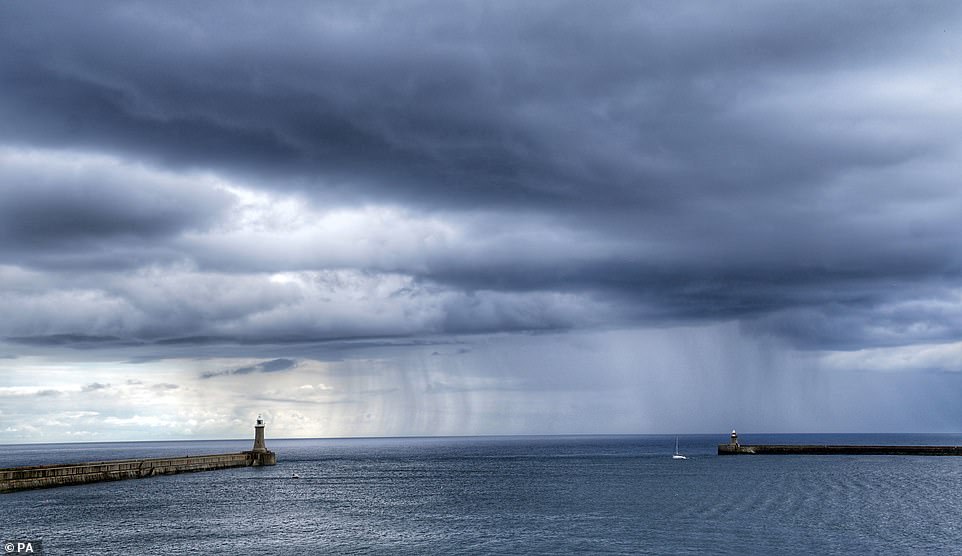 The jet stream – which plays a crucial role the UK’s weather – will be strengthening through the week, bringing low pressure in from the west, resulting in wind and rain for much of the country. Temperatures could dip to 10C (50F) in the early hours some mornings.

This will be followed by sunny intervals and a few showers, but will remain breezy and quite gusty in the north.

Through the week, the strongest winds are likely to be in the northwest of the country from tomorrow.

The Met Office said the middle of this week will see a spell of ‘changeable and unseasonably windy weather’ with showers, longer spells of rain, and a risk of coastal gales in the north. 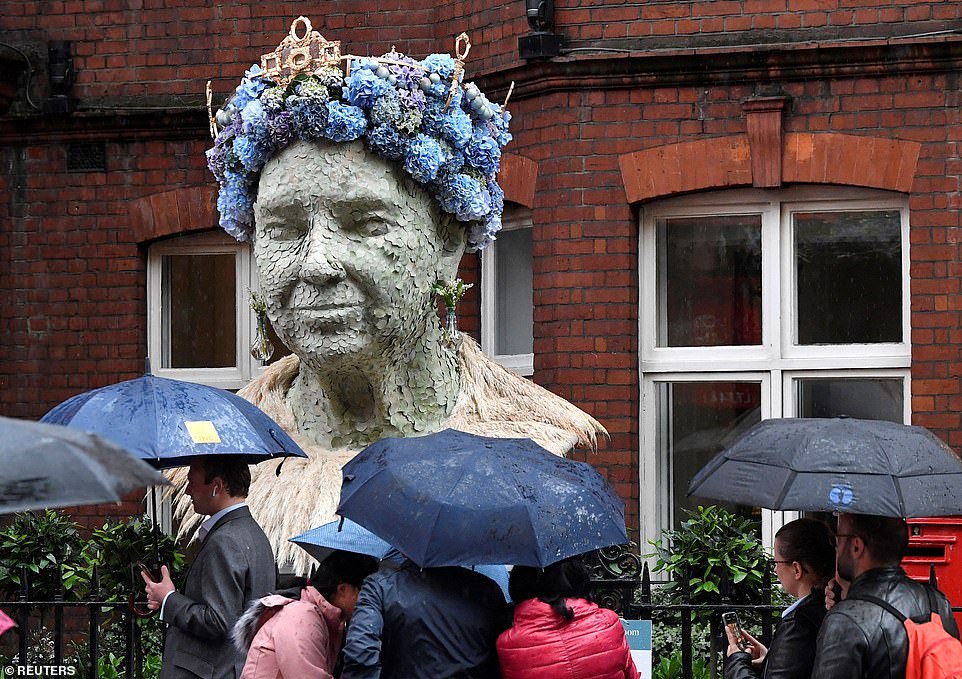 People shield from the rain as they walk past a floral representation of Queen Elizabeth, which forms part of the Chelsea In Bloom festival 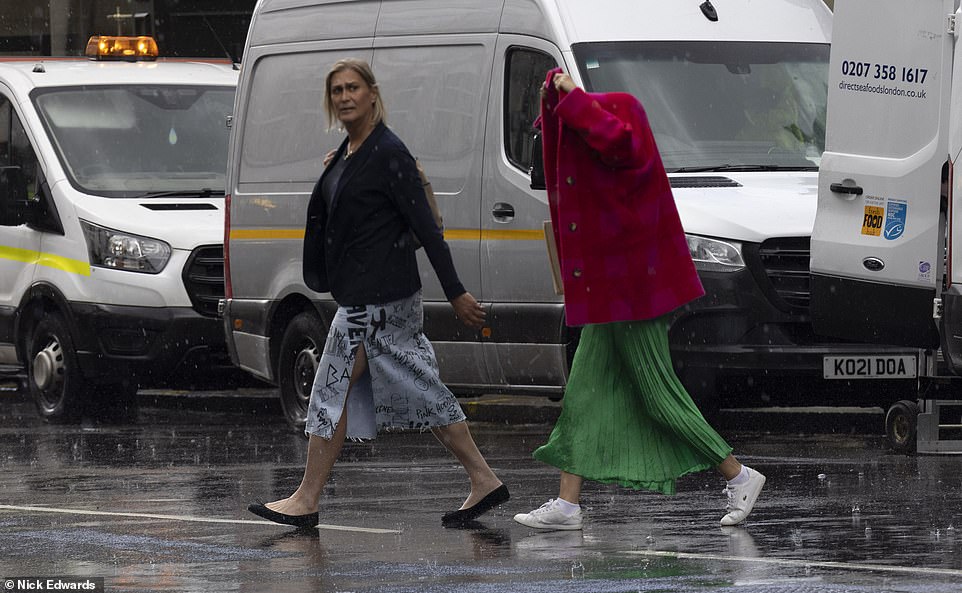 A woman covers her head with her pink and red checked coat, as she crossed a rainy street in Kensington, London, today 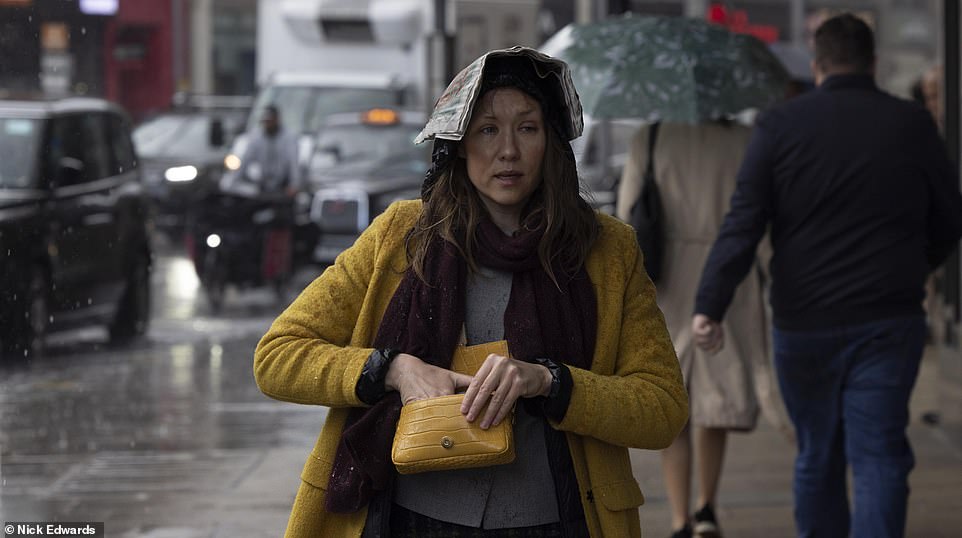 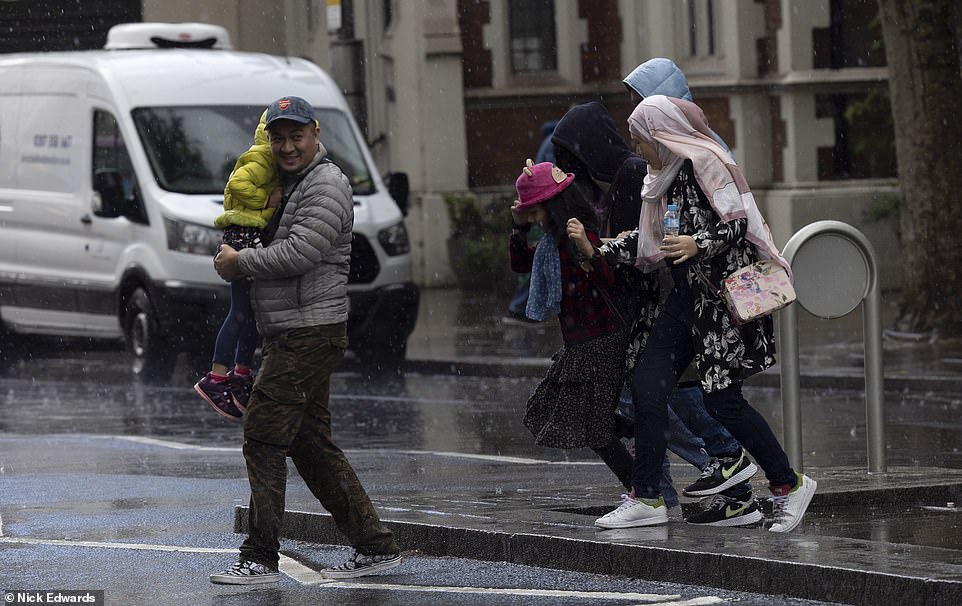 People run across the street in Kensington, London, through the rain, after thunder broke out across the city 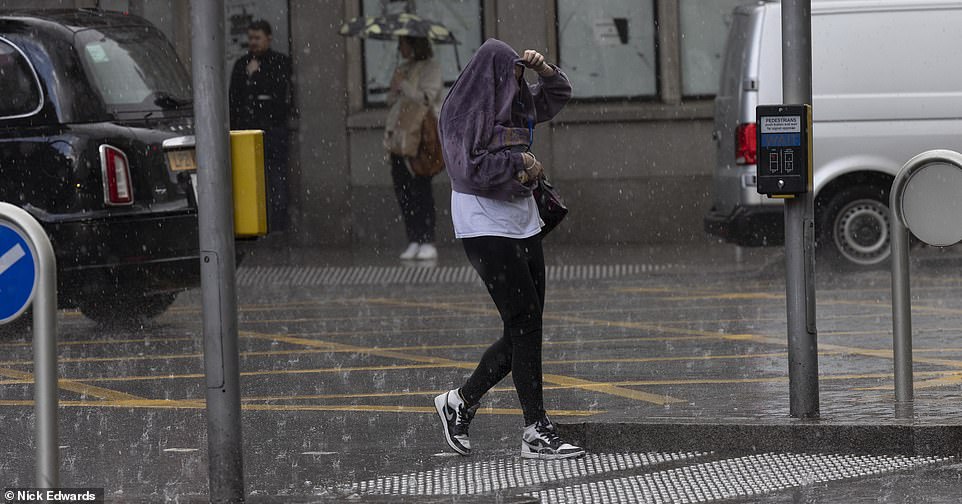 Hail hits London today, with people seeking shelter from the thunderstorm with their jackets and umbrellas 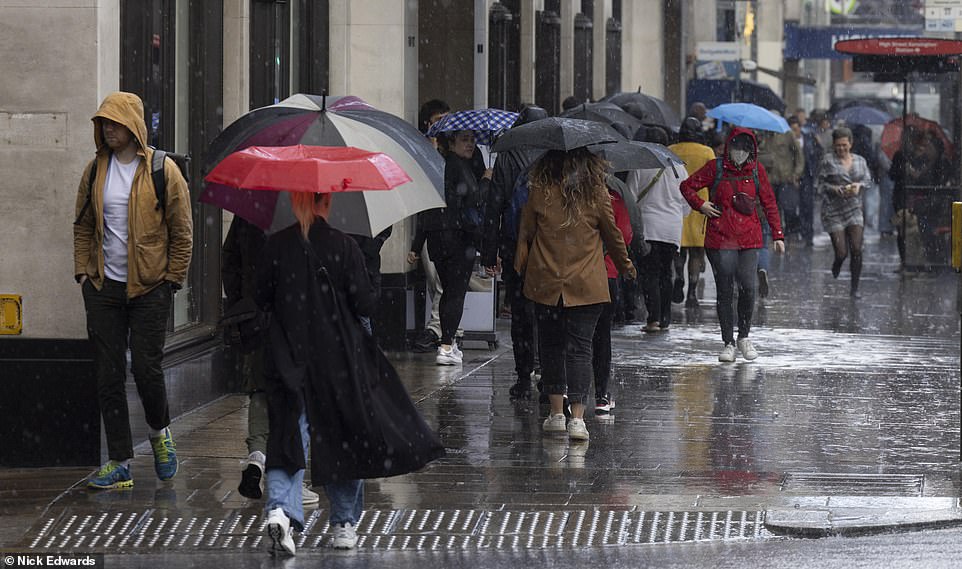 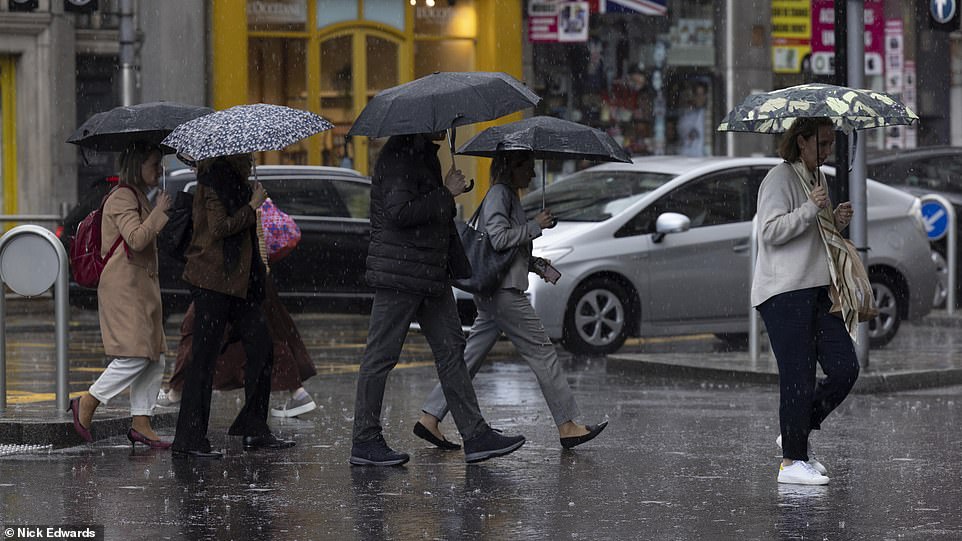 Umbrellas were out in full force today when a heavy down pour hit London, with thunder rumbling above 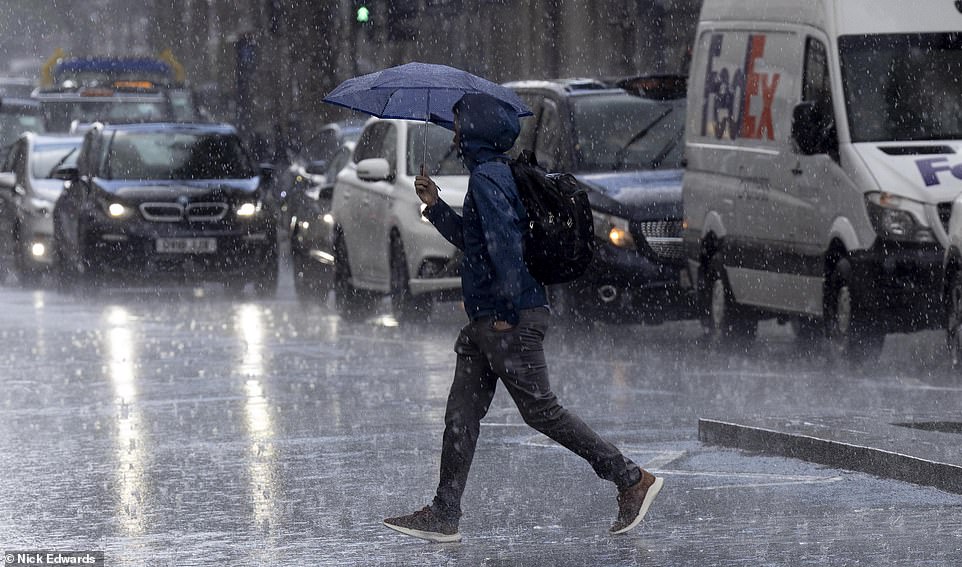 A man crosses the street as headlights illuminate the wet roads, as a thunderstorm his the capital city 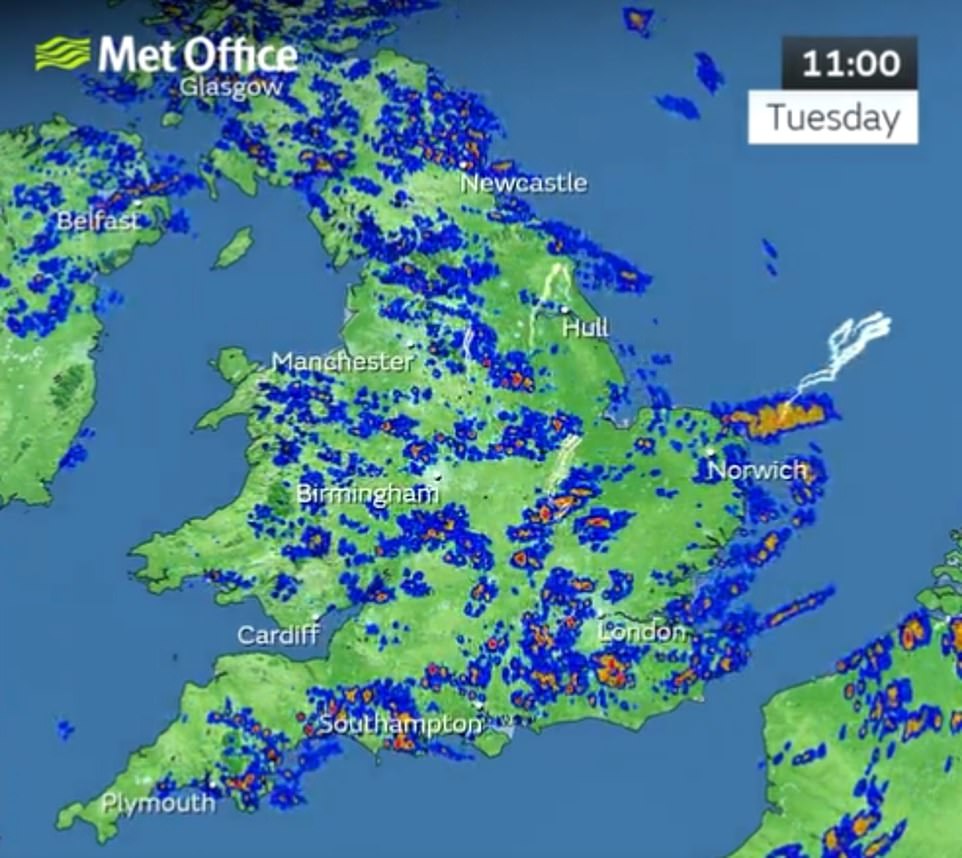 By 11am today, the Met Office was reporting heavy and thundery showers in central and southern England, with widespread rain showers across the UK, with some patches of lightning developing

‘It could be quite breezy and gusty in north Scotland,’ Mr Madge said. ‘Friday will have a few blustery showers in northwest Scotland, before easing, bringing a fine day with sunny spells.’

Weather will be improving by Saturday, he said, with a ridge of high pressure moving in.

Met Office Deputy Chief Meteorologist Adam Thornhill said the strengthening of the jet stream is the driving force behind low pressure moving in off the Atlantic and bringing periods of rain and wind for most this week.

‘The strongest winds will be in the northwest and although most areas of the UK will see some rain in the week, the highest accumulations are expected in western areas, with the southeast most likely to escape any rain,’ he said.

‘Weather of this nature isn’t unusual in a UK spring, as changes in the jet stream frequently bring interludes of unsettled weather.’

Some more settled weather will be on the way heading into the weekend, as the jet stream weakens, and high pressure begins to build in from the southwest.

Showers are possible in the far north on Friday, with areas further south most likely to stay dry and bright, as the weather settles.

Temperatures are expected to be widely around average for the time of year, although maybe warm in the south after some cool mornings, and feeling cool on exposed North Sea coasts. 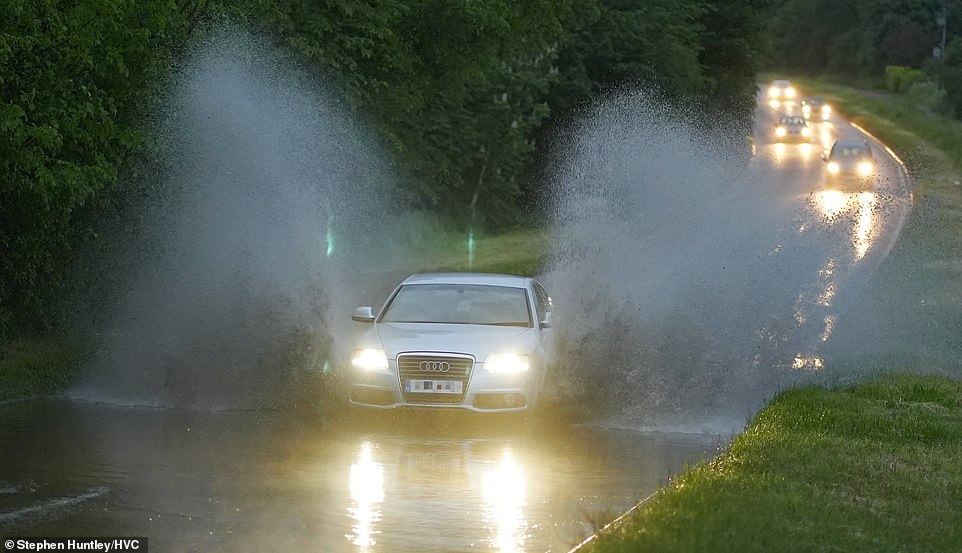 Last night, heavy rain resulted in surface water flooding in Chelmsford, Essex. Short thundery downpours are expected in the south and southeast of the country today