For the first time the new Elizabeth train line has been included on the Transport for London (TfL) tube map.

The transport company is insisting the new £20bn over budget cross-London line is not an underground but a new east-west railway.

It is displayed as a double purple line with a white line inside rather than a solid line to ‘differentiate the Elizabeth line as a new railway as opposed to a London Underground line’, TfL said.

The Elizabeth line has been added to the new tube map ahead of its opening on May 24 and is named in honour of the Queen, who visited Paddington station on Tuesday to mark the completion of Crossrail.

It is not the only addition to the map with Overground and Thameslink added since it was last updated in September 2021 with the addition of the Nine Elms and Battersea Power Station when the Northern Line was expanded. 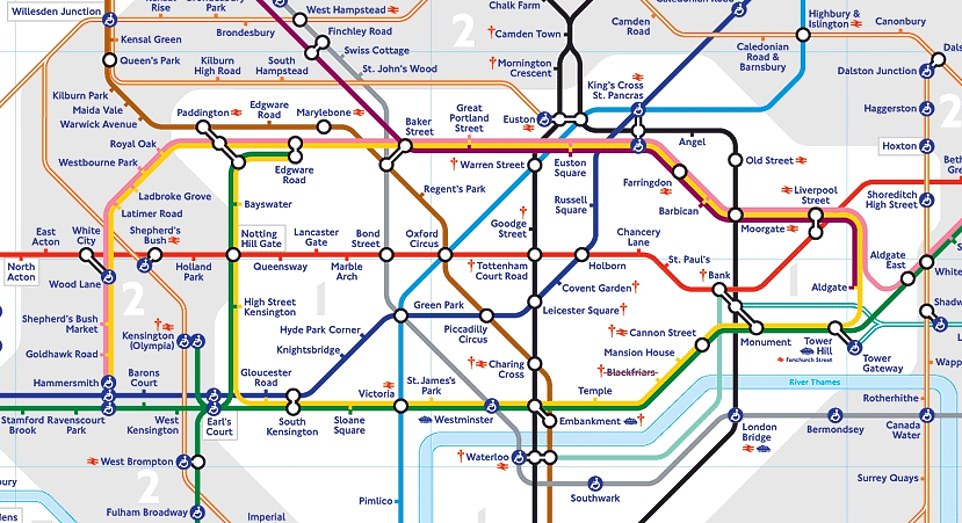 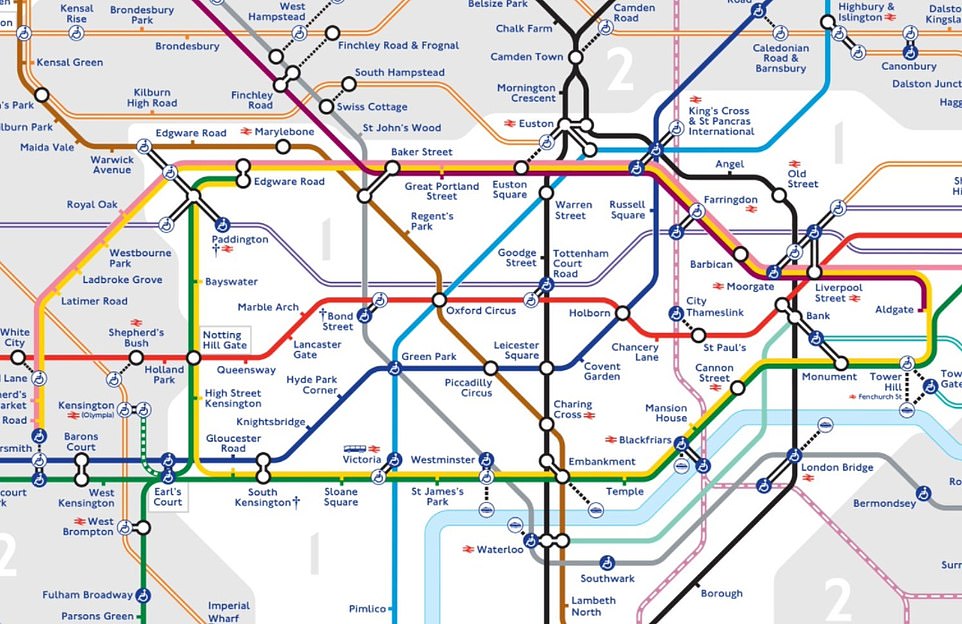 Who was Harry Beck and how did he come up with the classic tube map design?

Harry Beck was born in east London on June 4 1902 and began his career as an engineering draughtsman at the London Underground Signals Office during the 1920s.

His job was to draw schematics for the electrical systems of the London Underground.

Beck actually designed the underground map when he was unemployed – showing that he hadn’t been following the guidance of employer.

He assumed that passengers using the Tube were more bothered about finding their way than geographical accuracy and prioritised the map to outline the tube network rather than the distance between destinations.

Despite the map being iconic across the world, Beck’s original was initially rejected because it was deemed as too radical. However after a successful trial run, it was clear that it was what the public wanted.

The Elizabeth line is the only one called ‘line’ as opposed to other tube lines called simple the Bakerloo and Northern on TfL.

A spokeswoman for TfL told the Evening Standard: ‘The “Elizabeth line” is in itself the full name of the new railway and the route it operates on.

‘In contrast, the London Underground is the name of a separate mode of transport which operates individually named routes. This means we’ll always include “line” in all signage and reference to the Elizabeth line.’

Reacting to the new line Amin said on Twitter: ‘Just in time for the Jubilee, [TfL have] just dropped the new tube map with the Elizabeth Line. Colourful, frenzied, artistic all at once.’

The new central section, built by the delayed and overbudget Crossrail project, runs through tunnels from Paddington in west London to Abbey Wood.

Services on the two other sections already operate as TfL Rail, and will be rebranded to the Elizabeth line from May 24.

The map also includes the Bank branch of the Northern line, which reopened this week after a 17-week closure for major upgrades, and the London Overground extension to Barking Riverside, which launches in the autumn.

The Tube map is based on a design by London Underground electrical draughtsman Harry Beck in 1931.

The first published version was released in 1933.

TfL’s interim customer and revenue director Julie Dixon said: ‘Our world-renowned map now has another iconic addition in the Elizabeth line, which will serve London and the South East for hundreds of years to come.

‘When we open on Tuesday May 24, the new Elizabeth line will begin providing greater connectivity and step-free access from Reading and Heathrow to Shenfield and Abbey Wood through the centre of London.

Transport for London (TfL) unveiled a new map last year showing the two new stations on the Northern Line following the first major expansion of the Tube network since the late 1990s.

Nine Elms and Battersea Power Station is the first major expansion of the London Underground since the opening of the extension of the Jubilee line from Green Park to Stratford in 1999. 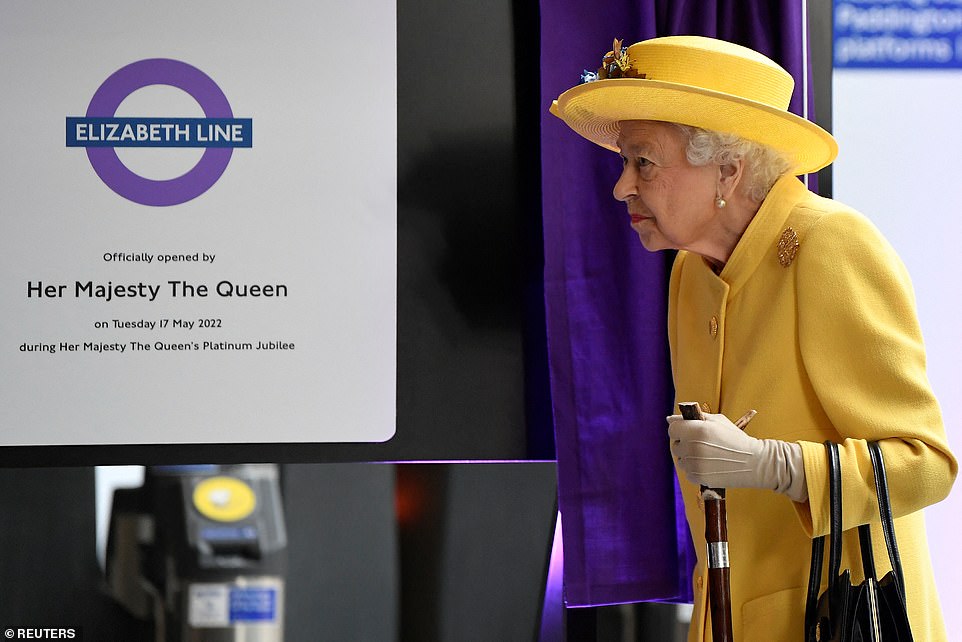 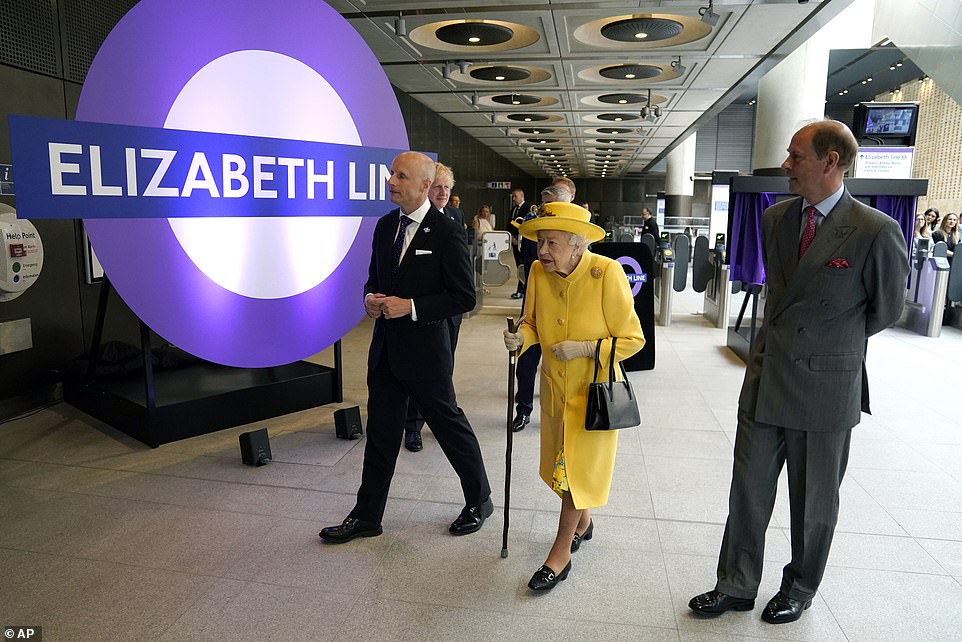 Dressed in sunshine yellow, the Queen arrived at Paddington at 11.32am, stepping carefully from the transparent lift while holding a walking stick and smiling warmly. Also pictured  Prince Edward, right, talks with Transport for London commissioner Andy Byford, left

Four years late and £4bn over budget: Everything you need to know before £14.8bn Elizabeth line FINALLY opens next week

The delayed and over-budget Elizabeth line was officially opened by the Queen today. Here are key questions about the line and how it will affect commuters.

– What area will the Elizabeth line cover? It will run from Reading in Berkshire and Heathrow Airport in west London, to Shenfield in Essex and Abbey Wood in south-east London, via the centre of the capital.

– Can I travel direct between those places from May 24? Unfortunately not. The Elizabeth line will initially operate as three separate railways, with a change of trains required at Paddington and Liverpool Street.

– When will they be integrated? That is expected to happen in the autumn.

– What is it currently like to travel through central London? Many passengers travel by Tube on the Central line for east-west journeys across the capital. These trains are often crowded and get hot in the summer due to not having air-conditioning.

– How will Elizabeth line trains compare? They will be much more comfortable, featuring walk-through carriages, wi-fi, travel information screens and air-conditioning.

– How about the stations? Ten new Elizabeth line stations will open in central London. They will be lighter, brighter and larger spaces than the vast majority of London Underground stations.

– What will be the impact on journey times? Many journeys within London will be quicker by the Elizabeth line than by Tube. According to travel app Citymapper, platform-to-platform journeys between Liverpool Street and Paddington will be cut from 18 minutes to 10 minutes.

– How about if I am travelling longer distances? Elizabeth line trains will stop at local stations, so journeys will be slower compared with the fastest mainline services between locations such as Reading and Paddington, or Shenfield and Liverpool Street. But once the three sections are integrated, many passengers will benefit by not having to change between trains and Tube services.

– What impact will the new line have on capacity? It will boost rail capacity in central London by 10%.

– What about fares? Elizabeth line journeys in central London will cost the same as equivalent Tube fares. Fares on services currently operated by TfL Rail will be unchanged.

‘This latest Tube map is a real credit to the team who have put it together.

‘It has been both a challenge and a privilege to update Harry Beck’s original design to literally put a new piece of transport history on the map.

‘This latest version takes into account a number of wider changes to the transport network, but will ensure Londoners and visitors alike are able to navigate around our transport network with ease.’

Crossrail, the project to build the new east-west railway, was delayed and over budget due to numerous issues including construction difficulties and complications installing signalling systems.

The total cost has been estimated at £18.9 billion, including £5.1 billion from the Government.

The Elizabeth line will boost capacity and cut journey times for travel across the capital.

It will stretch from Reading, in Berkshire, and Heathrow Airport, in west London, to Shenfield, in Essex, and Abbey Wood, in south-east London.

The Elizabeth line will also have ten new stations in central London and journeys will cost the same as equivalent Tube fares in the capital.

Opening the new line has been the Queen who was shown how to top her Oyster Card earlier this week in a surprise visit.

She was joined by her son Prince Edward – days after cancelling her appearance at the State Opening of Parliament due to ‘mobility issues’.

The 96-year-old, who now rarely carries out public engagements outside of her royal residences and was using a walking cane, picked up a limited edition Elizabeth line Oyster card. It had already been topped up with five pounds for the Queen, who famously rarely carries cash.

A Crossrail worker showed how the ticket machine worked before the monarch asked where passengers could travel to.

Dressed in sunshine yellow, the Queen arrived at Paddington at 11.32am, stepping carefully from the transparent lift while holding a walking stick and smiling warmly.

Unveiling a plaque stating that she had ‘officially opened’ the Elizabeth line, the monarch spent 10 minutes in the station before leaving in a lift, escorted by her son Edward. The earl then returned to the concourse ahead of a return journey on the railway from Paddington to Tottenham Court Road.

Her attendance was not publicly announced in advance, with the head of state facing ongoing mobility problems, but organisers were told there was a possibility she might be able to attend.

But in a major clue an hour and a quarter before Edward was due to arrive, Transport for London removed a plaque saying he had opened Crossrail and replaced it with one eight inches lower bearing the Queen’s name.

The Queen’s outfit was a Stewart Parvin double-wool crepe coat with an A-line silk dress in shades of yellow, royal blue and turquoise, and a matching hat by Rachel Trevor-Morgan. She was wearing her Singapore brooch.