The Queen has made a surprise visit to see the new Elizabeth line at London’s Paddington Station.

The 96-year-old monarch joined her youngest son the Earl of Wessex for the official visit, in what Buckingham Palace described as a “happy development”.

It was not known whether she would be able to attend – partly because she has been suffering mobility problems.

Organisers, however, had been “informed of the possibility” of her being able to make it – just over two weeks from her Platinum Jubilee weekend. Image:
The Queen has been suffering mobility problems Image:
Her Majesty using an Oyster card at the station

Holding a walking stick, the monarch emerged from a transparent lift and smiled brightly, looking resplendent in a Stewart Parvin double-wool crepe coat in sunshine yellow.

That was paired with an A-line silk dress in shades of yellow, royal blue and turquoise, and a matching hat by Rachel Trevor-Morgan.

She was also wearing her Singapore brooch.

She and Prince Edward were welcomed by Prime Minister Boris Johnson, Mayor of London Sadiq Khan and Transport for London commissioner Andy Byford.

The PM said it was “fantastic to see her” and those there were “incredibly touched and moved and grateful to Her Majesty for coming to open the Elizabeth line today”.

“That was brilliant. I did enjoy that. It was good fun,” the earl said after taking a return journey to Tottenham Court Road, standing in the cab on the way back. 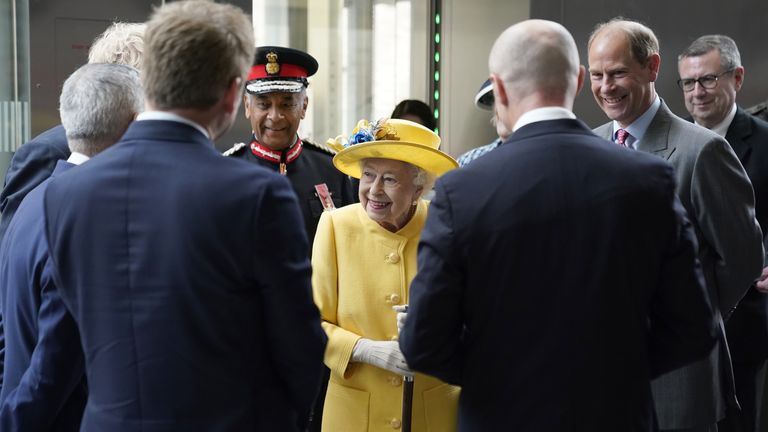 The Elizabeth line, named in the Queen’s honour, runs across London from west to east and opens to passengers on Tuesday 24 May.

Within hours of the opening, Mr Johnson said he would now be pushing for Crossrail 2 – a proposed north-south rail link across London to be built.

He said: “That is going to be transformative again. All the problems of commuters coming into Waterloo getting up to north London, you can fix that with another Crossrail.

“I think we should be getting on with that.”

Queen shown how to pay

Buckingham Palace had described the Queen attending the Elizabeth line opening as “a happy development”.

And should the monarch wish to use the new service, she was shown how to use an Oyster payment card.

The Queen was seen at the Royal Windsor Horse Show on Friday, days after missing the State Opening of Parliament. 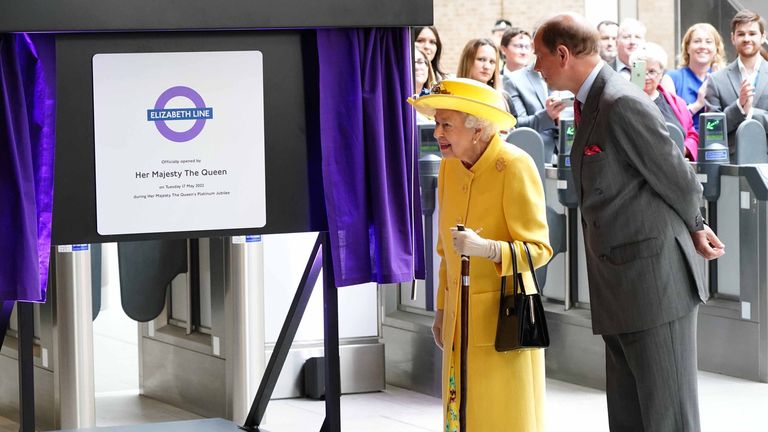 Image:
The Queen and Prince Edward unveiling a plaque

The project to build the Elizabeth line, known as Crossrail, was delayed and over budget.

There were construction difficulties and complications installing signalling systems.

The structure stretches from Reading in Berkshire and Heathrow Airport in west London to Shenfield in Essex and Abbey Wood in southeast London.

It will boost capacity and cut journey times across the capital.