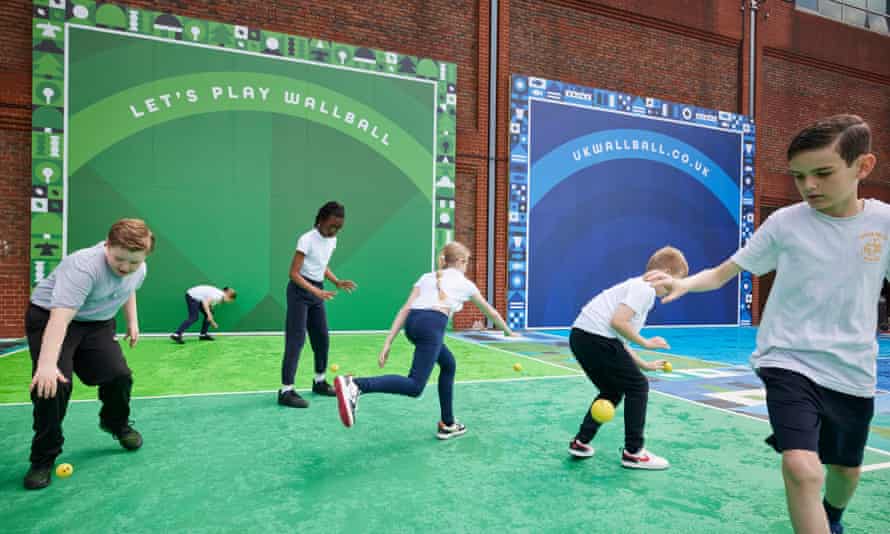 Can the simple joy of slapping a ball against a wall tempt shoppers and office workers to take a little more exercise?

That is the question posed by British Land, one of the UK’s biggest property companies, which is trialling wallball – like squash but with hands and a single wall – which it hopes to roll out at its retail and commercial developments.

Similar to the Spanish pelota and the rarefied public school game of Eton Fives, the game is being touted as a cheaper and perhaps more accessible alternative to trim trails, outdoor gyms and multi-use games area cages as planners and public health experts try to nudge Britain in a less sedentary direction.

The ball is whacked with the hand against a wall. Photograph: David Levene/The Guardian

It comes as new government data shows only two-thirds of people in England are considered physically active. That is defined as doing at least 150 minutes of moderate exercise a week. The number falls to less than half for children and young people, according to the Office for Health Improvement and Disparities.

This week, a pair of wallball courts will open against a previously blank wall at the Surrey Quays shopping centre in south-east London, replacing a car wash. Roger Madelin, the British Land executive in joint charge of the area’s £4bn, 10-year redevelopment, said walls could be added to other locations if it proved popular. British Land owns shopping centres including Meadowhall in Sheffield and office complexes including Broadgate in the City of London.

“In trying to get people active on the streets I am keen to try anything,” said Madelin, who reckons the game could lure tenants in its office complexes away from their desks and attract families to shopping centres.

Kate, a mother-of-four from Rotherhithe looking on at children trying out the wallball courts, welcomed the facility.

“There’s not much for the kids to do here; there’s a boxing club but there’s nothing else,” she said. Teething problems last week with the special bouncy balls used for the game rolling into the shopping centre car park will be solved before opening day, the organisers said.

The simple and cheap pastime (balls are available in a courtside vending machine for £2) is being championed in the UK by Daniel Grant, a keen player and NHS doctor who advocates “stealth health”: getting people more active with limited fuss. Top players are flying in this week from the US and Northern Ireland, where the game is already well established, in an effort to promote the game at a “one wall showdown” tournament under the A40 flyover in west London.

They include Conor McElduff from County Tyrone who, with Luke Thomson from Gravesend and Sacha Kruithof from Spain, Grant describes as the Roger Federer, Rafael Nadal and Novak Djokovic of European wallball.

Jay Sanchez, a leading player from California who has competed for 37 years, will join the UK push this week. He said he found the game addictive. “Once you start playing it’s hard to stop,” he said.

The first wall Grant opened in 2021, in a park near London Bridge, resulted in 1,200 balls bought in less than a year. He sees the walls as a shortcut to better health in dense towns and cities where the creation of new parks is unlikely.

Research published this month showed parks in the vicinity of housing developments built later than 2000 in England and Wales are 40% smaller than those in neighbourhoods where most of the housing was built between 1930 and 1939.

“They are not going to create more green space, they are just going to keep building and building so we need to use the grey space,” said Grant, looking on with pride at the latest wallball outpost in Rotherhithe. “This is what I wanted. You’re in a non-traditional sport environment, people walking past and having a go. I want this space to be an urban playground.”