The demand for homes also remains high at 58% above the five year average, according to the research.

It comes as Zoopla’s House Price Index for March found there are some areas across the country where listings have stepped up over the past month.

There was a 53% boost in new property listings in Kensington and Chelsea between 27 March and 24 April, Zoopla said.

New listings were up 45% in Erewash and 38% each in Pendle and Elmbridge.

Zoopla said: “The increase in listings in Kensington & Chelsea – across all property types, comes amid the return of international demand into the sales market in London, with some buyers seeing value in central London where prices have risen more modestly than the rest of the country.

“In the north west, a rise in supply of homes in Pendle will be attractive to buyers looking for a slice of rural life, as it borders two areas of outstanding natural beauty.

“Erewash in the East Midlands however is within easy commuting distance of Nottingham and Derby. The increase in listings will provide more choice for buyers, helping to further loosen up housing chains, and could lead to higher numbers of transactions.”

The analysis added: “While there are signs of a positive turn in the supply of homes for sale, it is unlikely that the total shortage of stock across the UK will unwind this year. This will continue to put a floor under pricing.”

But buyers look likely to have to pay more stamp duty now due to rising house prices.

Of the 4.3m homes which have now been pushed into a higher stamp duty bracket, more than a quarter (28%) or 1.2m have now moved above the initial £125,000 stamp duty threshold in England and Northern Ireland.

In Wales and Scotland, rising house prices also mean that a further 360,000 homes have been pushed across the initial threshold.

A total of 3.5 million homes in England and Northern Ireland have moved up into a higher stamp duty bracket, and 815,000 properties have moved across the thresholds in Scotland and Wales.

For first-time buyers, who benefit from a stamp duty relief on purchases up to £300,000 in England and Northern Ireland, some 1.9m more properties have moved beyond this threshold since the start of the pandemic and the first lockdown.

Gráinne Gilmore, head of research at Zoopla, said: “Buyer demand has been very strong ever since the end of the first lockdown in 2020, and the start of this year has been no exception.

“This demand, coupled with constrained levels of supply has put upward pressure on pricing – with the average property now worth an additional £29,000 compared to March 2020.

“This has pushed millions more homes into higher stamp duty brackets, meaning that if they come to market, there is an additional cost for buyers.

“While homeowners who make a move will see the benefit from increased property values when they sell, new entrants to the market will have to find additional finance to fund a move – meaning the reliance on the ‘Bank of Mum and Dad’ is likely to increase among first-time buyers.

“It also highlights the importance of first-time buyers having access to mortgage deals with smaller deposit requirements if they can meet the criteria for all other aspects of a mortgage loan.” 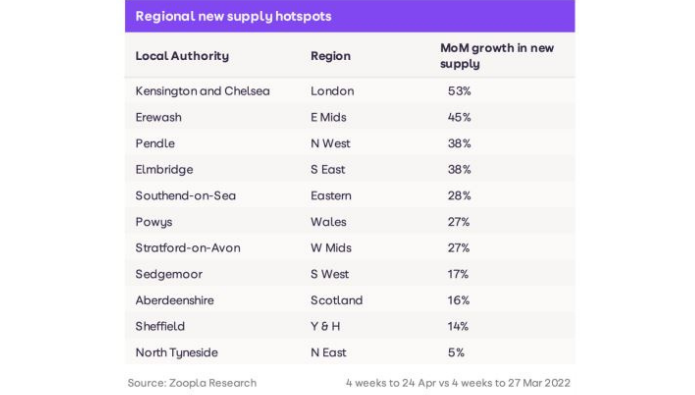