Bank holiday traffic chaos outside Heathrow Airport as boy, ten, is rushed to hospital in a life-threatening condition following serious crash on M4

The M4 has been brought to a standstill outside Heathrow Airport after a ten-year-old boy was rushed to hospital in a life-threatening condition following a serious crash.

A further four people, all believed to be adults, have also been taken to hospitals in south and west London, police have confirmed.

A spokesperson for the Metropolitan Police said: ‘At 1.43pm police were called following a road traffic collision involving four vehicles close to junction three of the M4 in West Drayton.

‘A 10-year-old boy who was travelling in one of the cars has been transported by air to a south London hospital with injuries that are believed to be life threatening.

‘A further four people, believed to be adults, have been taken by ambulance to south and west London hospitals. We await updates on their condition.

‘The M4 was closed in both directions to allow the emergency services to respond to the incident. The eastbound side is likely to remain closed for some time with significant traffic delays expected as a result.’

An air ambulance pictured landing at the scene of the serious crash on the M4, with a large presence of emergency services on the opposite carriageway 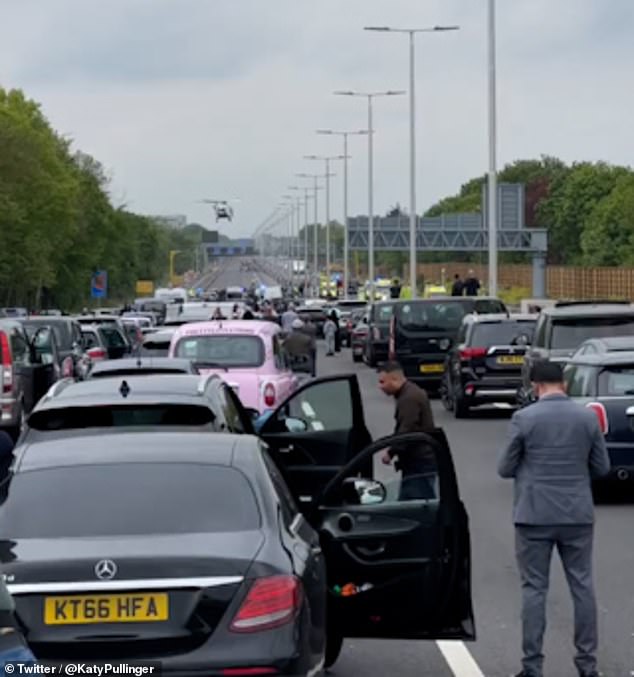 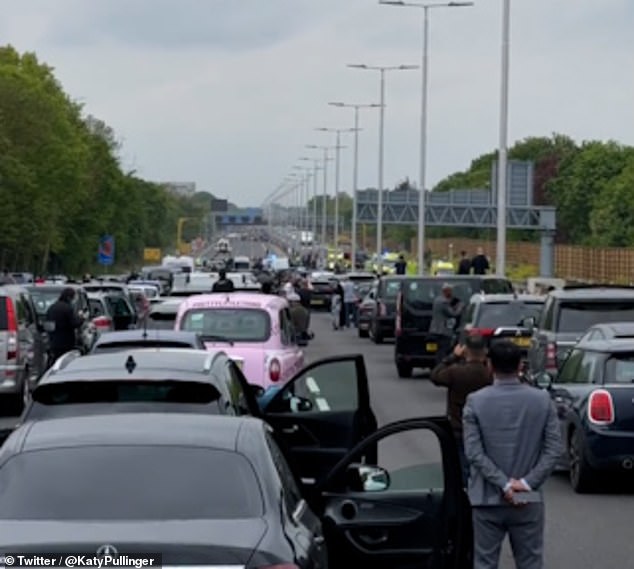 Stranded motorists have been pictured stood outside their vehicles as the motorway has been closed in both directions following a ‘multi-vehicle collision’.

Highways England has warned of hour-long delays as diversions are put in place around the busy airport.

A statement says: ‘There are severe delays of 60 minutes on The M4 eastbound in Greater London between J4 and J3 (near Heathrow Airport) due to a multi vehicle collision which has resulted in the eastbound carriageway being closed.

‘Emergency services are in attendance including National Highways Traffic Officers.

‘At present westbound is also blocked to allow the air ambulance to land and currently has delays of 30 minutes.’

It also warns road users to use a diversion route that has been put in place and to ‘re-route or even delay your journey’.

The incident has also caused delays to stretch back onto the M25 for those travelling eastbound.

Pictures from the scene show at least four ambulances in attendance, along with firefighters, police and Highways England officers.

‘Exit the M4 at J4 and take the third exit onto the M4 Heathrow Spur road. At the roundabout take the first exit onto the A4 slip road and join the A4 Bath Road.

‘If this closure impacts on your planned route, please allow extra journey time. Plan ahead, you may wish to re-route or even delay your journey.’