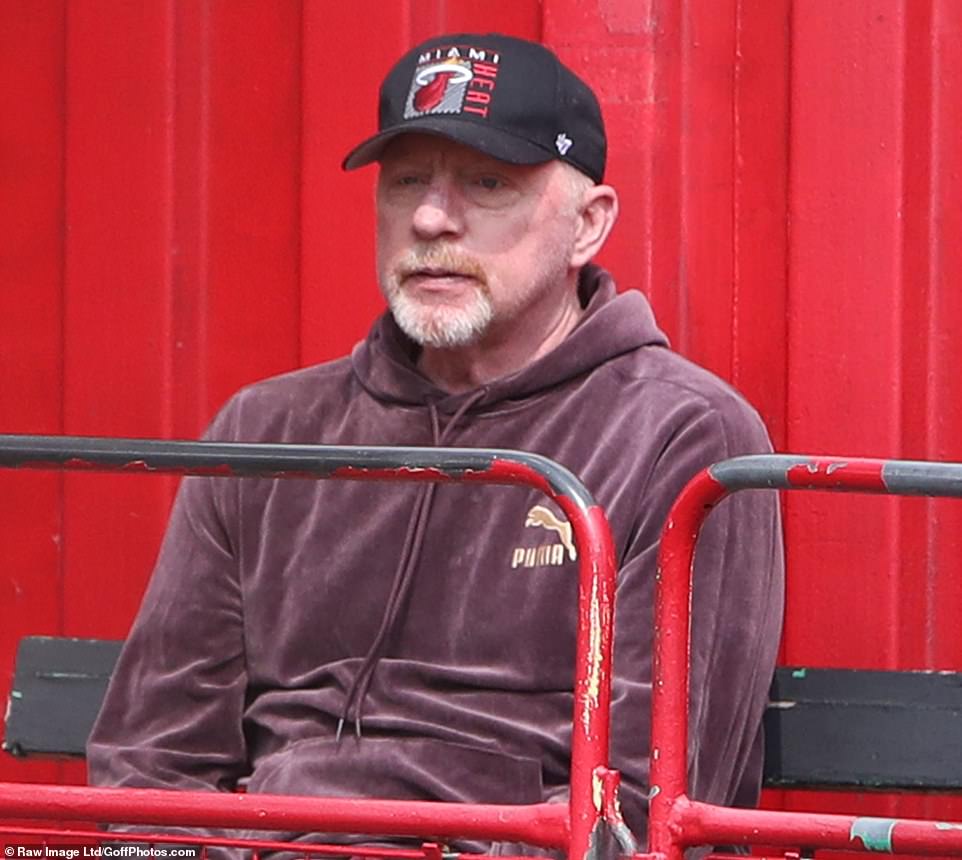 He is facing up to seven years in prison after concealing hundreds of thousands of pounds following his bankruptcy.

And the prospect of jail appeared to weigh heavy on Boris Becker as he looked teary-eyed and forlorn ahead of being sentenced tomorrow.

The German star-turned-commentator was found guilty of four charges under the Insolvency Act in a trial this month.

The father-of-four was legally obliged to disclose all his assets after being declared bankrupt in 2017.

Boris Becker, pictured in London on April 23, is facing up to seven years in prison after concealing hundreds of thousands of pounds following his bankruptcy 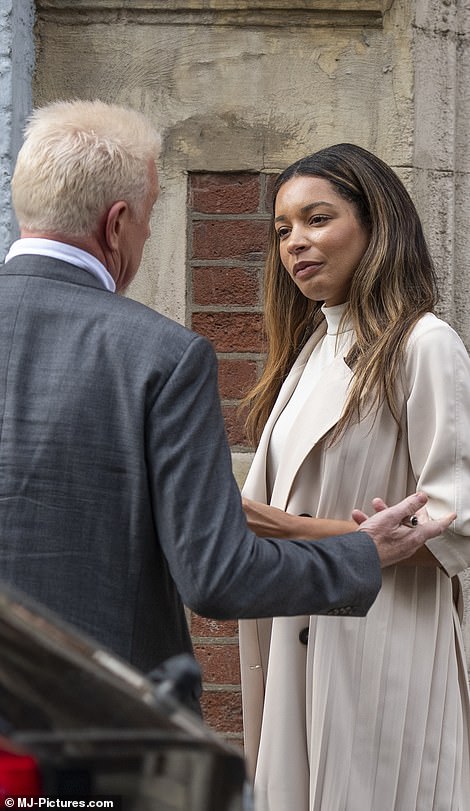 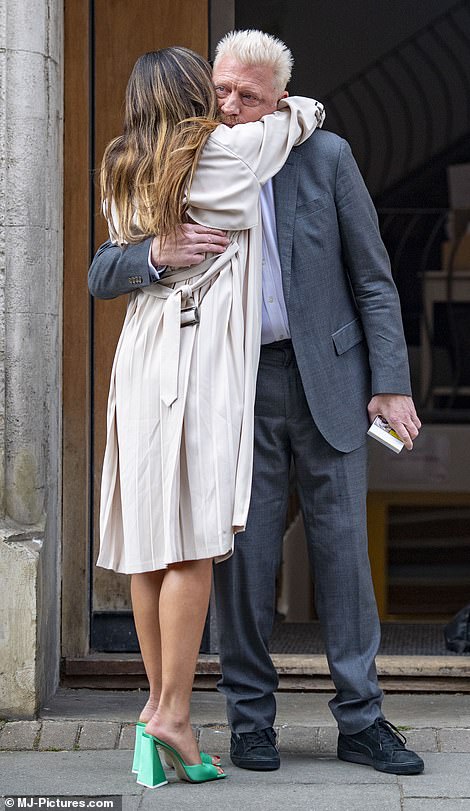 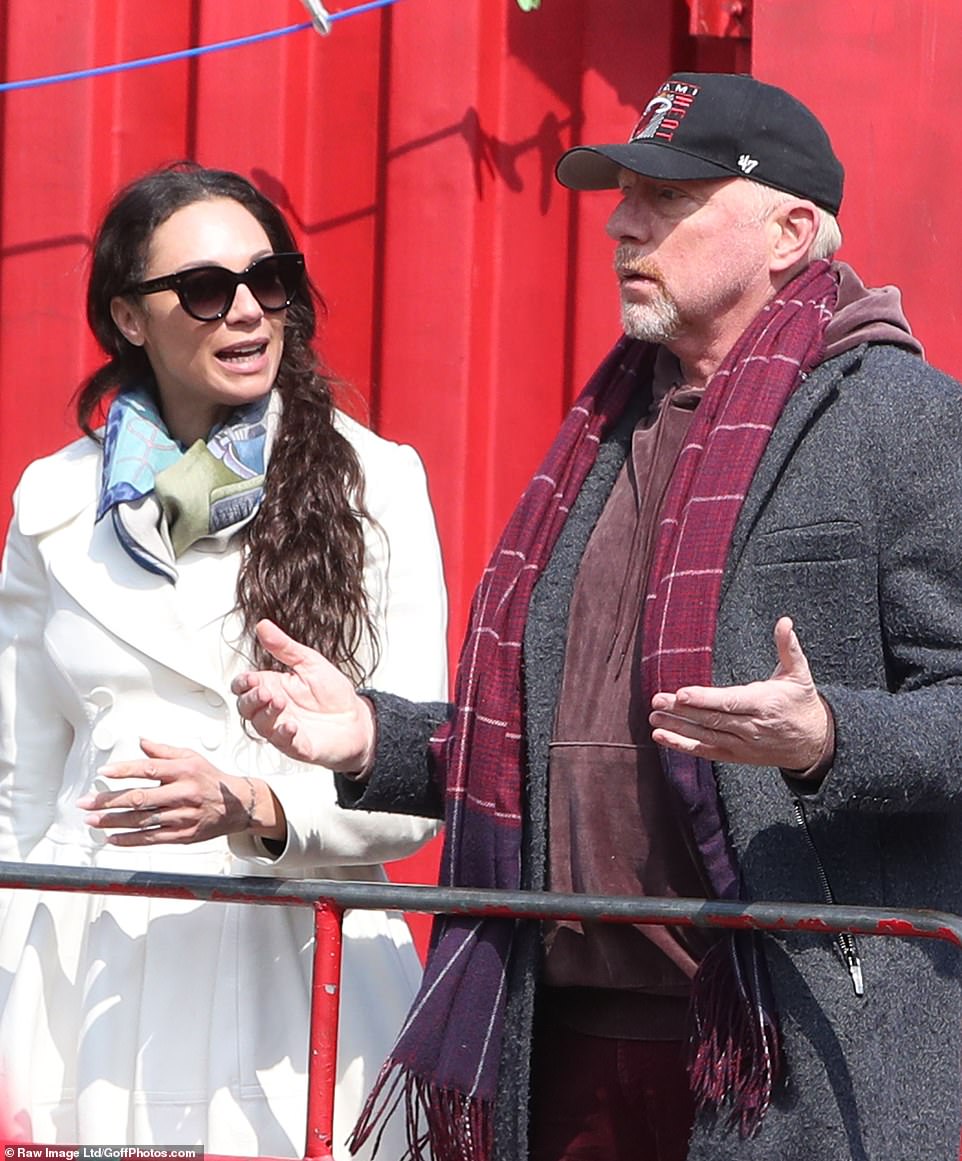 The London-based former world number one now faces losing lucrative contracts with TV networks around the world, including his job as a BBC pundit at Wimbledon.

Yesterday Becker, who won tennis fans’ hearts in the 1980s with his all-action style of play, was embraced by his girlfriend as he smoked during a break in a meeting with documentary maker George Chignell in London.

Last weekend, he was pictured with Lilly and their 12-year-old boy in south London before the father and son met up with his current girlfriend. Becker will learn his fate at Southwark Crown Court tomorrow morning.

Becker’s mother Elvira Becker, 86, has begged a judge not to send her son to jail, saying earlier this month that he is ‘a decent boy overall’, adding: ‘I hope my son doesn’t have to go to prison.’

During his trial, Becker told a jury how his £38 million career earnings were swallowed up by an expensive divorce to his first wife Barbara Becker, child maintenance payments and ‘expensive lifestyle commitments’.

The six-time Grand Slam champion said he was ‘shocked’ and ’embarrassed’ when he was declared bankrupt on June 21 2017 over an unpaid loan of more than £3million on his estate in Mallorca, Spain. 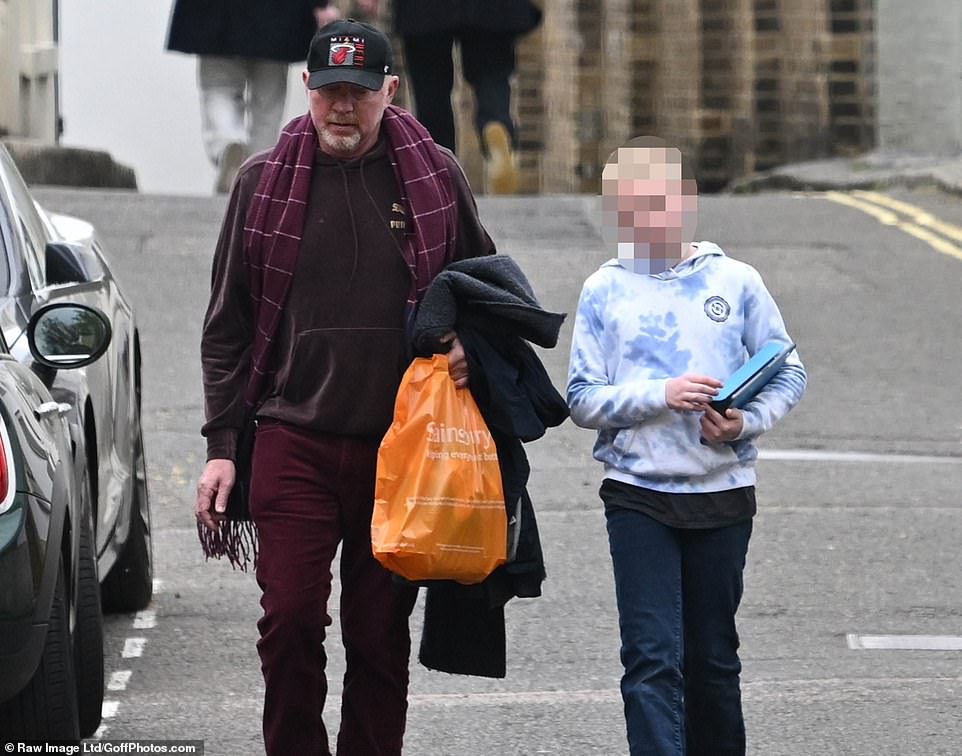 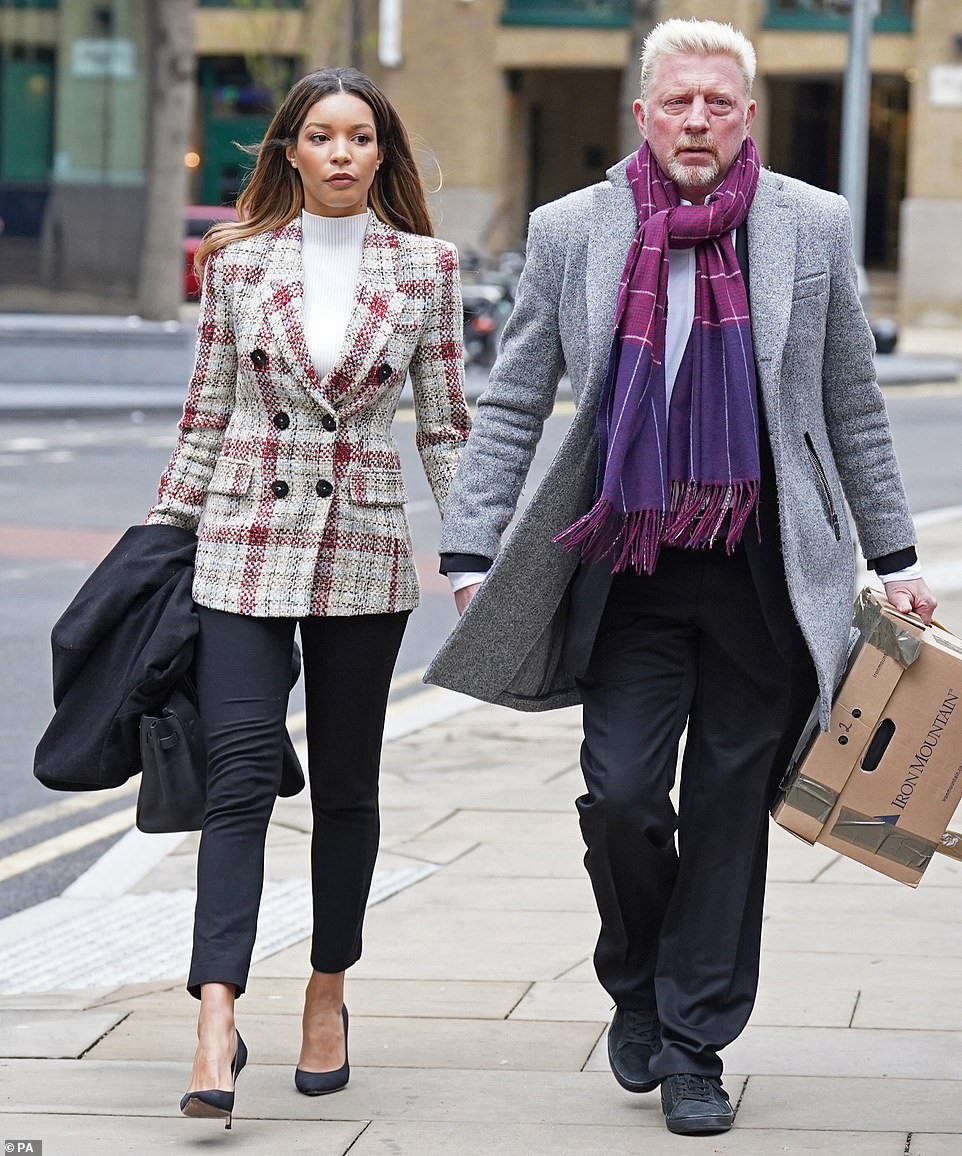 The German national, who has lived in the UK since 2012, claimed he had co-operated with trustees tasked with securing his assets, even offering up his wedding ring, and relied on the advisers who managed his life.

However, Becker, who was supported in court by his partner Ms de Carvalho Monteiro and eldest son, was found guilty of four charges under the Insolvency Act by a jury at Southwark Crown Court on April 8.

They include removal of property, two counts of failing to disclose estate and concealing debt.

Judge Deborah Taylor released Becker on conditional bail ahead of sentencing tomorrow, when he could face a jail sentence carrying a maximum term of seven years on each count.

The jury heard Becker received £950,000 from the sale of a Mercedes car dealership he owned in Germany, which was paid into a business account.

Prosecutor Rebecca Chalkley said he used the account as a ‘piggy bank’ for personal expenses, including £7,600 on children’s school fees, almost £1,000 at Harrods, and payments made to Ralph Lauren, Porsche, Ocado and a Chelsea children’s club. 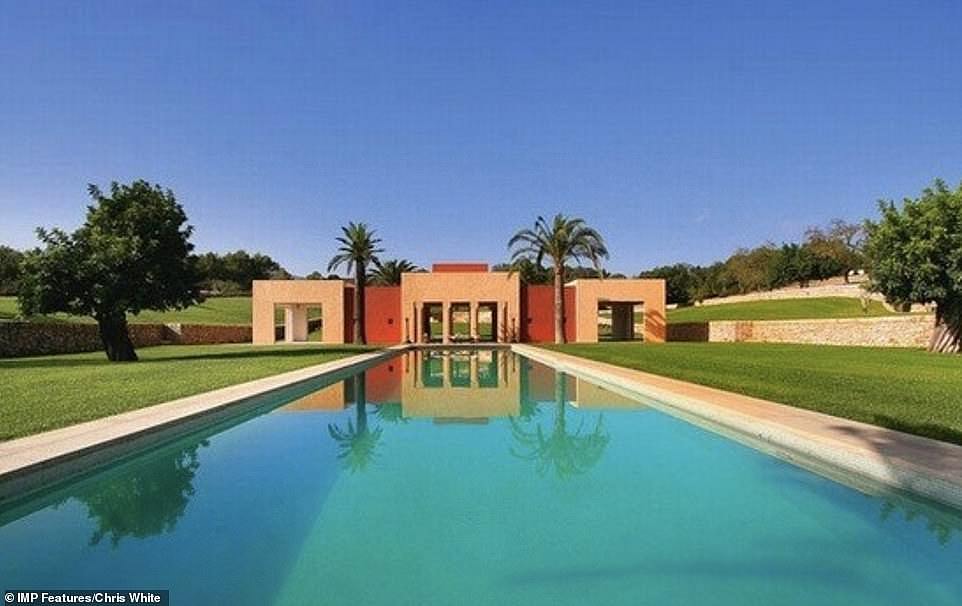 The 54-year-old commentator was declared bankrupt in June 2017 after borrowing around £3.5 million from private bank Arbuthnot Latham for this property in Mallorca 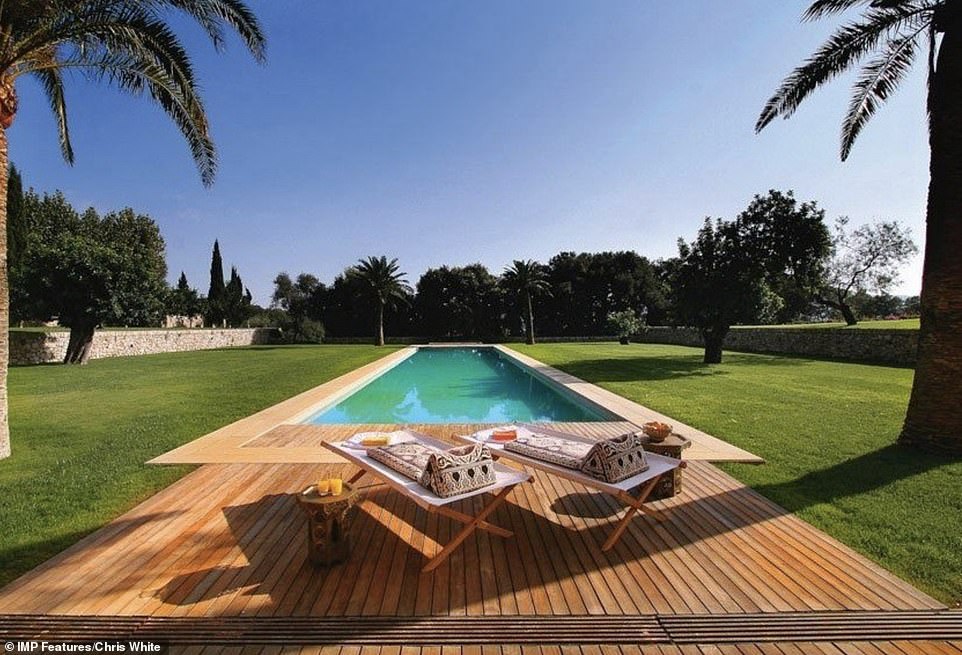 Becker, a former world tennis number one, was declared bankrupt in June 2017 over an unpaid loan of more than £3million on his estate (pictured) in Mallorca, Spain 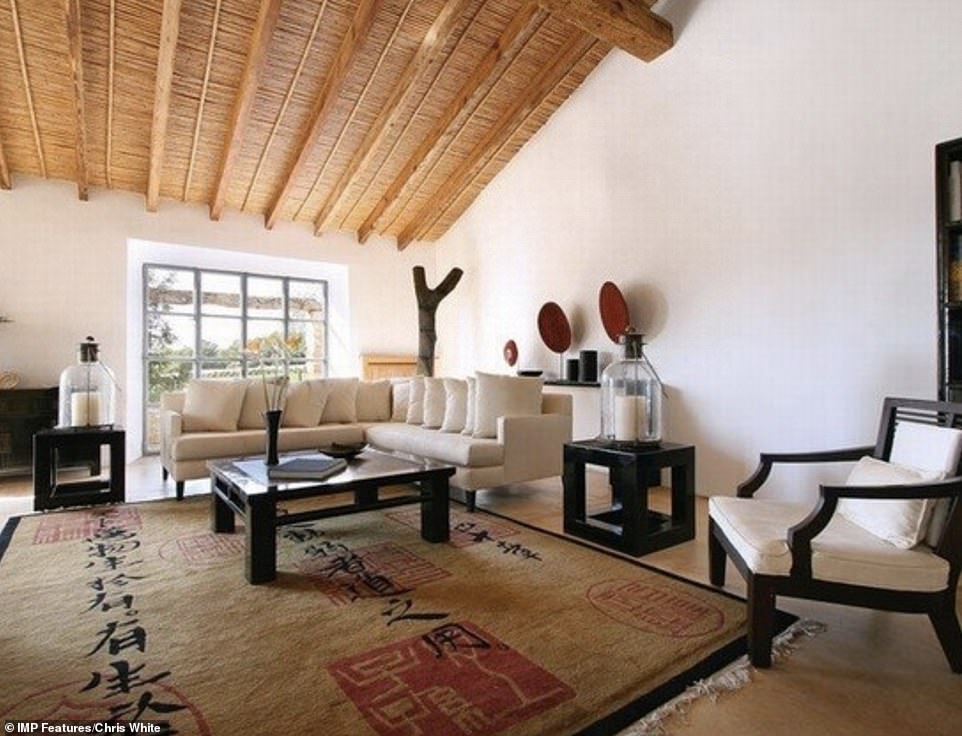 Becker was cleared of all other charges including failing to hand over nine tennis trophies including those won at the 1985 and 1989 Wimbledon tournament, the 1991 and 1996 Australian Open and the 1992 Olympics. He could face a maximum seven years in jail 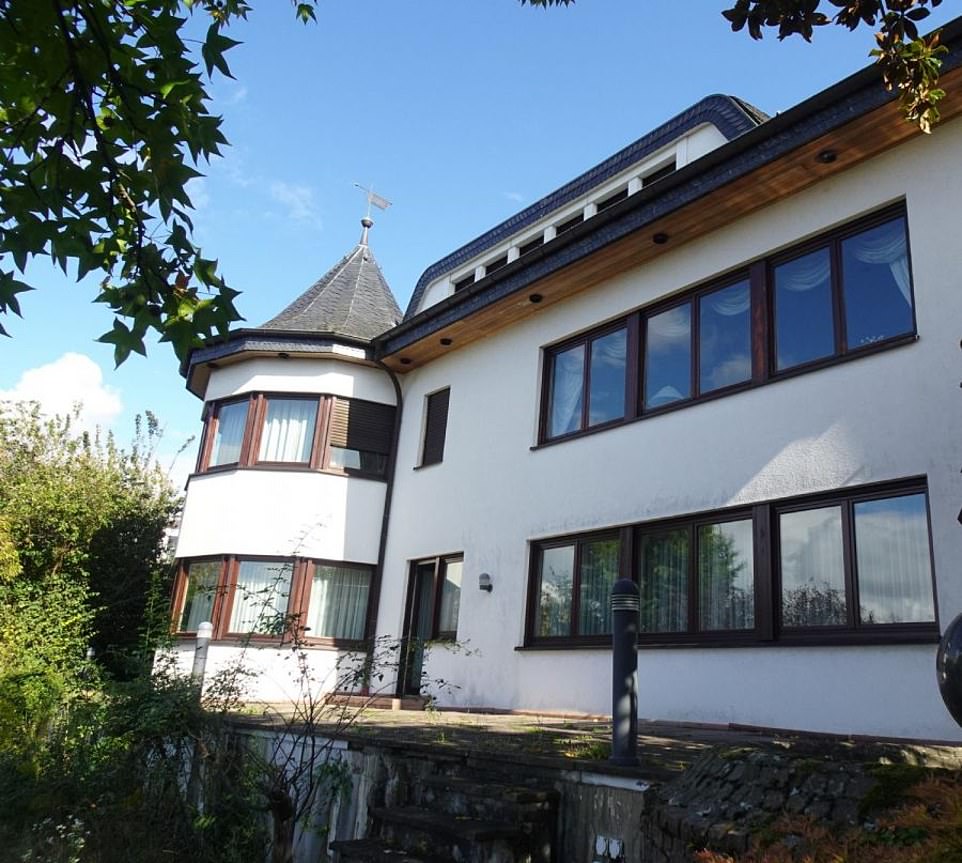 He was also convicted of trying to conceal the ownership of his £1.8million villa (pictured) ‘Im Schilling’ in his native Leimen, Germany, as well as his ownership of 75,000 Data Corp shares

He was found guilty of transferring £356,000 to nine recipients, including the accounts of his ex-wife Barbara and estranged wife Sharlely ‘Lilly’ Becker, the mother of his fourth child.

Becker also paid £40,000 for an ankle operation at a private clinic and spent £5,000 at a luxury golf resort in China, the court heard.

He was also convicted of failing to declare a property in his home town of Leimen, hiding an £700,000 bank loan on the house as well as 75,000 shares in tech firm Breaking Data Corp.

But Becker was acquitted of a further 20 charges, including nine counts of failing to hand over trophies and medals from his tennis career.

He told jurors he did not know the whereabouts of the memorabilia, including two of his three Wimbledon men’s singles trophies, including the 1985 title that catapulted him to stardom, aged 17. 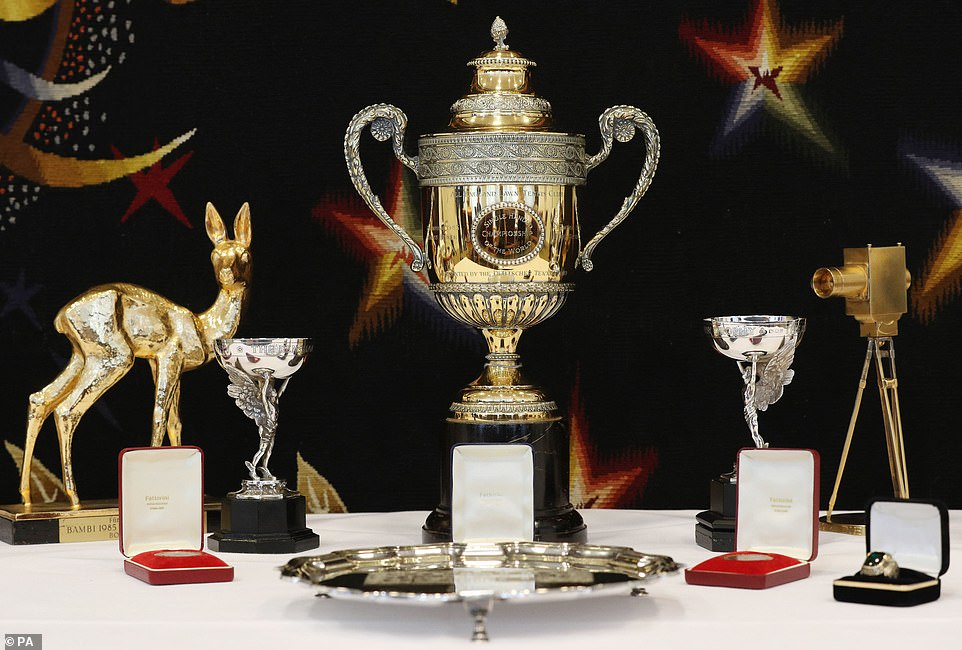 Some of his trophies were auctioned off for £700,000 to pay his debts and he has made various appeals to try to locate them 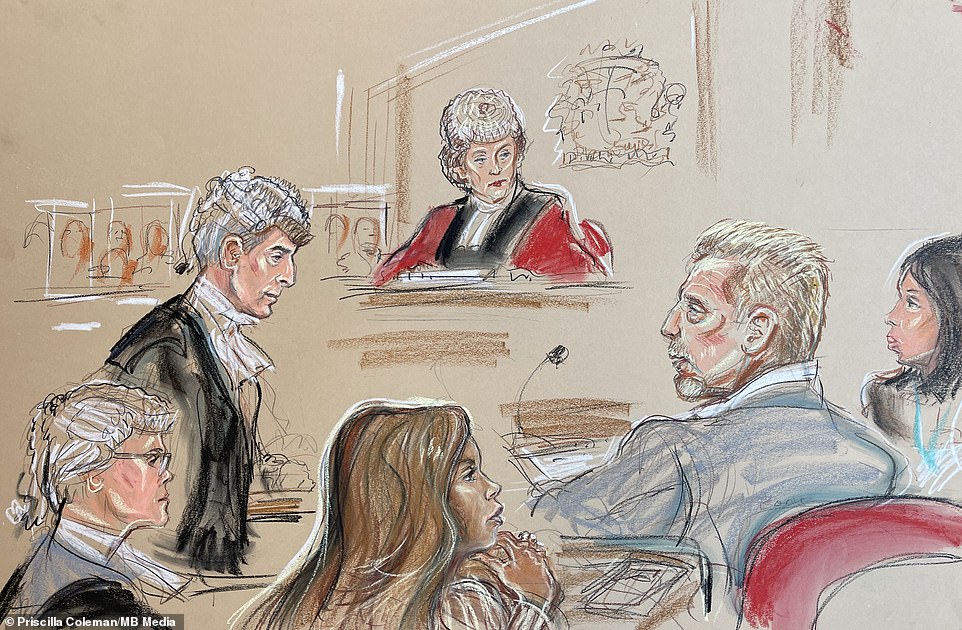 A court artist’s sketch of Boris Becker (far right) in the witness box being questioned by his barrister Jonathan Laidlaw QC (left). His partner Lilian de Carvalho Monteiroover can be seen in the foreground, and prosecutor Rebecca Chalkley on the left

Becker was cleared of failing to declare a second German property, as well as his interest in the £2.5 million Chelsea flat occupied by his daughter Anna Ermakova, who was conceived during Becker’s infamous sexual encounter with waitress Angela Ermakova at London restaurant Nobu in 1999. 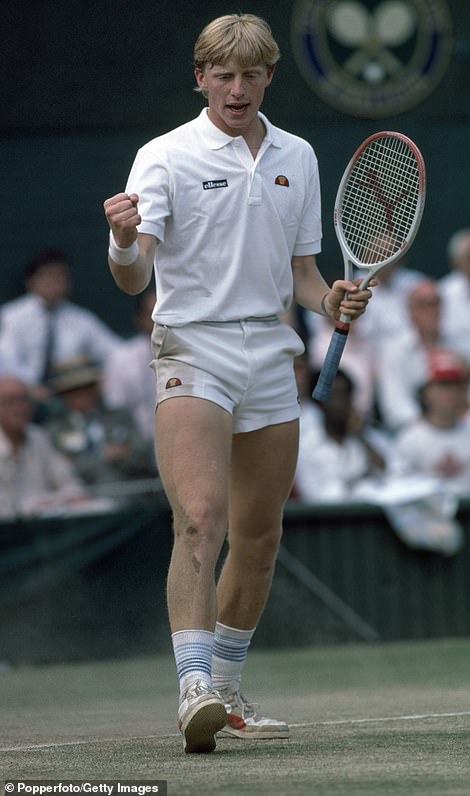 Giving evidence, he said he earned a ‘vast amount’ of money during his career, paying cash for a family home in Munich, a property in Miami, Florida, and the estate in Mallorca, which was worth about 50 million euros at the height of the property market.

But Becker, who went on to coach current world number one tennis player Novak Djokovic, work as a TV sports commentator and act as a brand ambassador for firms including Puma, said his income ‘reduced dramatically’ following his retirement in 1999.

He said he was involved in an ‘expensive divorce’ with ex-wife Barbara in 2001, involving high maintenance payments to their two sons, and had to support his daughter Anna and her mother, in a deal which included the Chelsea flat.

Becker, who was resident in Monte Carlo and Switzerland before moving to the UK, said he had ‘expensive lifestyle commitments,’ including his £22,000-a-month rented house in Wimbledon, south-west London.

He also owed the Swiss authorities five million francs (about £4 million) and separately just under one million euros (more than £800,000) in liabilities over a conviction for tax evasion and attempted tax evasion in Germany in 2002.

The court heard Becker’s bankruptcy resulted from a £3.85 million loan from private bank Arbuthnot Latham in 2013, and £1.2million, with a 25 per cent interest rate, borrowed from British businessman John Caudwell, who founded Phones 4u, the following year.

He said bad publicity had damaged ‘brand Becker’, meaning he struggled to make enough money to pay off his debts, while his QC Jonathan Laidlaw said at the time of his bankruptcy Becker was too ‘trusting and reliant’ on his advisers.

The rise and fall of a tennis legend: How Boris Becker went from Wimbledon teen sensation, to conceiving a child in a Mayfair restaurant, bankruptcy and facing seven years in prison

Few spots stars have ever hit the height of Boris Becker’s tennis careers – and none as young as the German ace.

Born in Leimen, West Germany, in 1967, Becker, the son of an architect father and a Czech immigrant mother, was thrust into the world of tennis from a young age.

His father founded a tennis centre in the town, where Becker honed his skills early on.

By the age of 10, in 1977, he was a member of the junior team of the Baden Tennis Association.

He went on to win the South German championship and the first German Youth Tennis Tournament.

After winning funding for training from the German Tennis Federation, he turned professional at 16 in 1984, winning the Tennis World Young Masters at the NEC in Birmingham in 1985, before claiming victory at Queens in June. 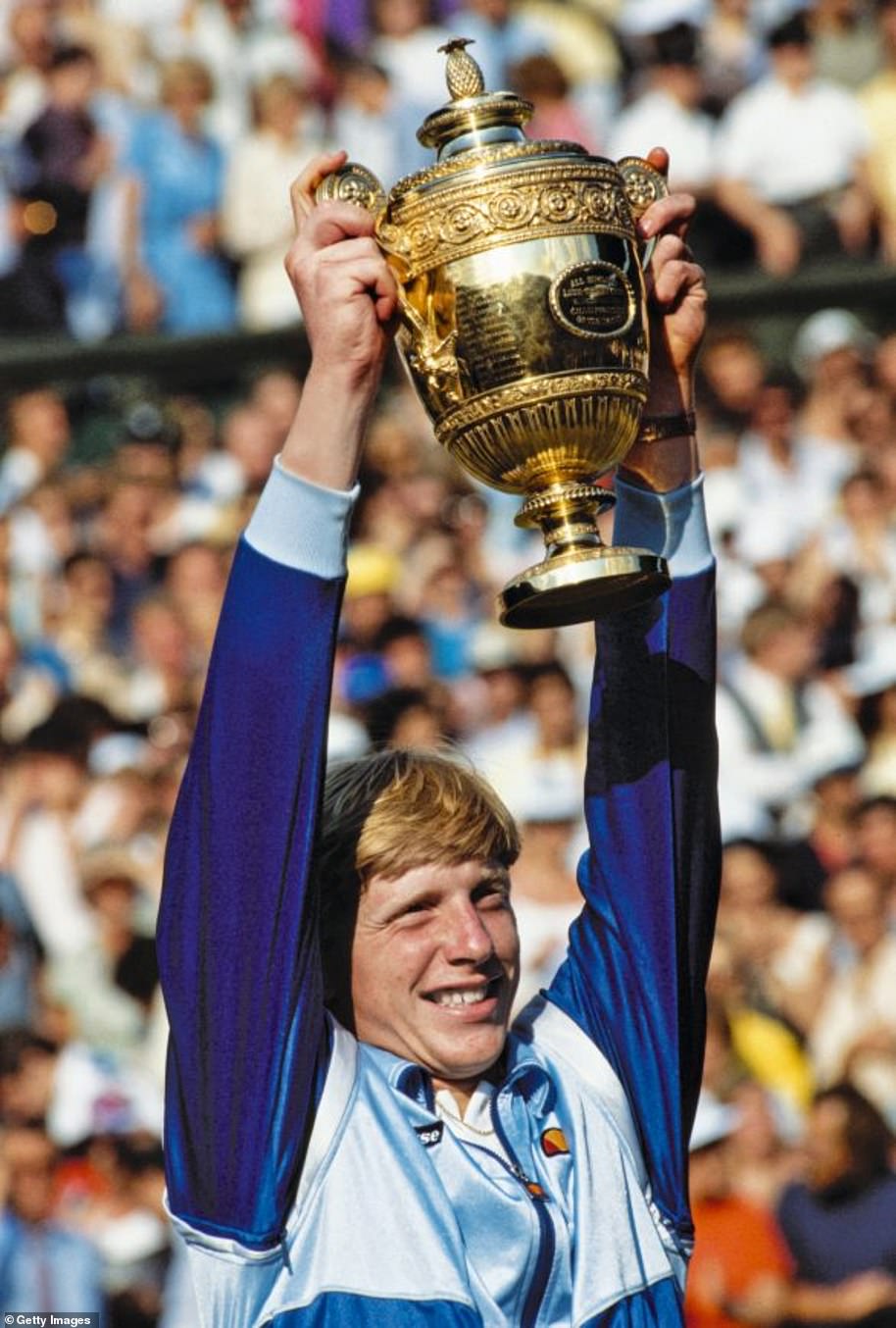 In July 1985, aged 17, he entered Wimbledon as an unseeded player and took the tournament by storm, beating Kevin Curren by four sets in the final

Two weeks later, in July, aged 17, he entered Wimbledon as an unseeded player and took the tournament by storm, beating Kevin Curren by four sets in the final.

At just 17 years and 228 days old he became the youngest men’s singles champion at SW19 – and immediately became a household name.

The following year he defend his title, beating then world number one Ivan Lendl to secure back-to-back Wimbledon titles.

He appeared in 77 finals and won 49 singles titles during his 16 years as a tennis pro.

But by 1993, facing criticism over his marriage to wife Barbara and tax problems with the German government, had caused Becker to slide into a severe mid-career decline.

In 1997, Becker lost to Sampras in the quarterfinals at Wimbledon. After that match, he vowed that he would never play at Wimbledon again.

However he returned one more time to the prestigious west London tennis club, in 1999, this time losing in the fourth round to Patrick Rafter.

Off the court, his personal troubles continued. He had to pay £2.4million after he fathered a daughter, named Anna, with a Russian model while married to wife Barbara.

That incident took place after he crashed out of Wimbledon to Rafter in 1999 and decided to retire from the sport, aged 31.

Becker, in his 2003 autobiography, Stay A Moment Longer, revealed how he ‘cried my eyes out’ and felt the need to go out for a few beers with friends.

However his then wife Barbara, seven months’ pregnant with their second son, wanted him to stay at their hotel with her. 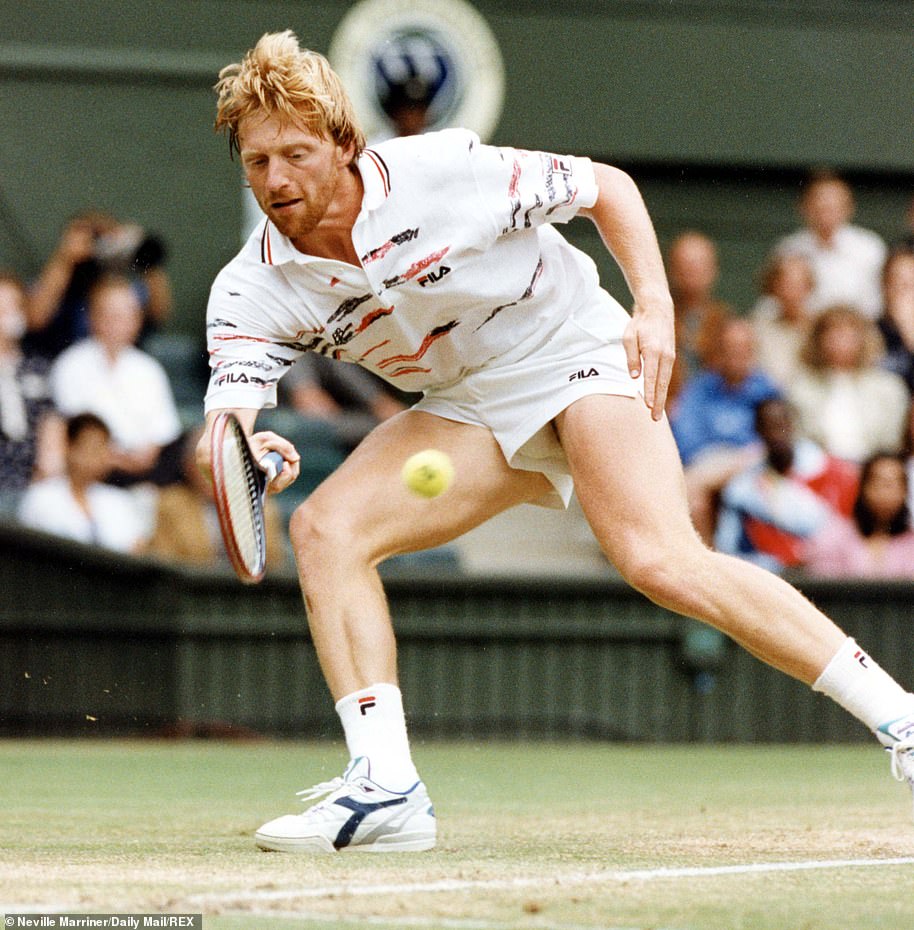 But by 1993, facing criticism over his marriage to wife Barbara and tax problems with the German government, had caused Becker to slide into a severe mid-career decline

‘She couldn’t and wouldn’t understand that she suddenly wasn’t first in my priorities,’ said Becker.

‘I said, ‘Just once more with the lads, Barbara, just once more to say farewell and then it’s only you’. That didn’t work. We rowed for two whole hours. Suddenly she was in pain and decided to check into hospital.;

Becker said he told his wife to call him if the baby was really on the way, then hit the town.

By 11pm he was at the bar in Mayfair’s Nobu and spotted Russian model Angela Ermakowa. The pair had sex on the staircase in the London outpost.

The following February his secretary handed him a fax in his Munich office. It read: ‘Dear Herr Becker, We met in Nobu in London. The result of that meeting is now eight months old.’

He later split from his first wife Barbara Feltus, a divorce which is estimated to have cost him more than £15million, as well as their home in Miami.

Becker found a new post-tennis purpose soon after, joining the BBC for its annual coverage of Wimbledon – to great success.

But his personal problems continued. He had a short engagement to Alessandra Meyer-Wölden in 2008, before announcing that he and Dutch model Sharlely ‘Lilly’ Kerssenberg would marry in 2009.

After nine years of marriage, and a child, Becker’s fourth, the pair split in 2018.

A year earlier, Becker had been declared bankrupt in June 2017 over an unpaid loan of more than £3million on his estate in Mallorca, Spain.

His former business partner, Hans-Dieter Cleven, also claimed that the former tennis ace owed him more than £30million – though the case that was rejected by a Swiss court.

Now Becker faces another bump in the road – perhaps the most serious yet – after being found guilty of four counts relating to the Insolvency Act earlier this month.

He faces up to seven years in prison – with his freedom now left hanging in the balance ahead of his sentencing tomorrow.