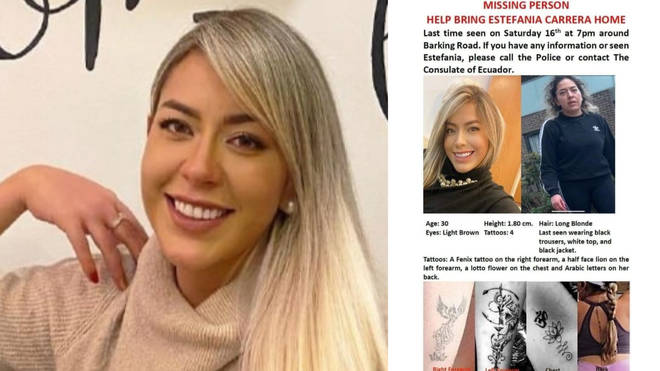 Estefania Carrera Barragan, a nutrition expert, was last seen at around 7pm on Barking Road, east London on April 16.

Picture:
Consulate of Ecuador in London

Fears are growing for an Ecuadorian blogger in London who has not been heard from for 10 days.

Estefania Carrera Barragan, a nutrition blogger, was last seen at around 7pm on Barking Road, east London on April 16.

The 30-year-old only moved to London in December and family members raised concerns after not hearing from her.

The London Consulate appealed to the public for information on social media writing: “Ecuadorian citizen Estefania Carrera Barragan has been reported missing. Her family knows nothing about her since April 16.

“To locate Estefanía Carrera, who has been missing since April 16. An image is attached that shows [her] most recent appearance.

Estefanía is described as having blonde hair, brown eyes and was last wearing black trousers, a white top and a black jacket.

She also has four distinctive tattoos, a phoenix on her right forearm and half a lion face on her left arm, a Lotto flower on her chest and Arabic text down the length of her spine.

Great cities are wasted on the rich