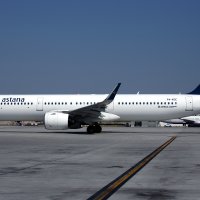 Air Astana plans to offer new scheduled connections to the UK and Turkey from next month using its fleet of Airbus A321 aircraft.

Flights from Kazakhstan’s largest city, Almaty (ALA), to London Heathrow (LHR) will begin on May 12, operating via a stopover at Aktau (SCO) in western Kazakhstan. The route will be served twice a week on Thursdays and Saturdays.

Data provided by OAG Schedules Analyser shows the airline previously served the UK’s largest airport nonstop from Almaty until May 2014 before switching operations to Nur-Sultan (NQZ), the capital city of Kazakhstan which was known as Astana until 2019.

Since May 2014, Air Astana’s sole link between Kazakhstan and the UK has been the NQZ-LHR service. Flights on this route are currently operating twice a week, but OAG data shows the route will be suspended from May 7.

Instead of flying NQZ-LHR nonstop, Air Astana said it would offer a connecting domestic flight from Nur-Sultan to allow passengers from Kazakhstan’s capital to join the flight to London from Aktau.

In addition, the carrier will launch flights from Almaty to Bodrum (BJV) in southwestern Turkey on May 27. Service will operate on Tuesdays and Thursdays.

Air Astana operates seven routes to destinations in Turkey, linking Almaty and Nur-Sultan with both Antalya (AYT) and Istanbul (IST). Flights to Istanbul also operate from Aktau and Atyrau (GUW), while Istanbul Sabiha Gokcen (SAW) is served from Turkistan (HSA).

Across its network, Air Astana is this week (w/c April 25, 2022) offering 112,860 domestic seats and 36,817 seats on international routes. Turkey is the airline’s largest overseas market, accounting for around 28% of all international departure seats offered from Kazakhstan.

Russia and Ukraine were previously sizable international markets for the carrier, but flights to both countries have been suspended following Russia’s invasion of Ukraine.

Speaking to Aviation Week Network in March, Air Astana CEO Peter Foster said the Nur-Sultan-London Heathrow service was operating via the southern route as a result of Russian airspace limitations, which added about 90 minutes of flying time.

He added that increasing fuel costs may result in additional fuel surcharges, though he noted that the airline is approximately 40% hedged for the whole of 2022, at prices current when the positions were taken in late 2020/early 2021.

Kazakhstan’s largest airline recovered from a loss-making 2020 to declare a profit after tax of $36.1 million in 2021. Total airline revenue increased by 92% to $756 million. During 2021, Air Astana carried 3.5 million passengers while its low-cost subsidiary FlyArystan carried 3.1 million.