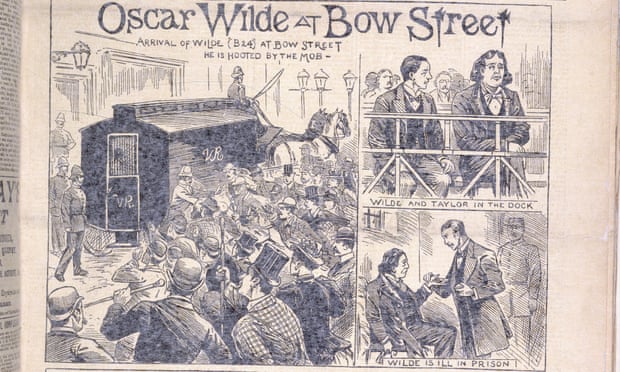 Computer hard drives that were smashed up by Guardian executives to avoid handing over leaked classified documents to the government are on public display in a new exhibition about the media and society over the past 500 years.

Breaking the News, which opens at the British Library on Friday, raises challenging questions for historians, social commentators and news gatherers as well as the wider population who learn about events through mainstream and social media.

Drawing on archive material held by the library, including 450m pages from newspapers from 1619 to the present day, the exhibition highlights issues of truth and trust in the media, censorship and suppression, ethics, distortion and partisanship.

Luke McKernan, the lead curator of the exhibition, said: “There has never been a time when news has been so hotly debated, so sought after and so diverse in its forms. Each story in the exhibition tells us something different about why the news matters.”

The exhibition, which has taken four years to put together, examined “the forces that drive news; the inter-relationship between those providing and those consuming news; fake news, ‘alternative facts’ and what is truth,” he added.

“It doesn’t answer questions about these issues; rather it comes up with more questions.”

The exhibition is arranged thematically rather than chronologically. The Guardian’s hard drives, destroyed by angle grinders and drills while watched by two technicians from GCHQ, the government spy agency, are in a section on public interest.

The documents in question came from Edward Snowden, a National Security Agency contractor, in 2013 as part of the biggest ever leak of western intelligence. The Guardian destroyed the computers after the government explicitly threatened the paper with an injunction to return the material, citing national and international security. The paper argued its revelations of surveillance and breaches of privacy were in the public interest.

Highlights of Breaking the News exhibition

One of the greatest celebrity scandals of the Victorian age, which sparked a frenzy of newspaper coverage

Newsreel footage of ‘the Titanic’

Shown amid great appetite for information after the luxury liner sank in 1912, the footage was actually of the Titanic’s sister ship.

Occupation of Guernsey in the second world war

The cover of the Guernsey Evening Press on 1 July 1940 listed the ‘Orders of the commandant of the German forces in occupation of the island of Guernsey’. By 1942, the Guernsey Underground News Service (Guns) had started the illegal distribution of BBC news reports, printed on tomato packing paper.

Sunday Times scoop of the century

The diaries of Adolf Hitler, ‘discovered’ in 1983, were exposed as forgeries after the paper ran its ‘world exclusive’.

Final edition of the News of the World

‘Thank You and Goodbye’, said the front page on 10 July 2007. Rupert Murdoch closed the paper after revelations that journalists had hacked the phones of public and private figures.

A section on “Disaster” includes footage of furious and distressed residents of Grenfell Tower and its neighbouring homes, accusing journalists of failing to report residents’ warnings that the building was unsafe.

“You only come when we die,” says one person in the aftermath of the 2017 fire that killed 72 people and destroyed the 24-storey block of flats in west London.

“Conflict” includes the BBC Home Service broadcast on 6 June 1944, in which details of the D-day landings were released to the public, and the war correspondent Marie Colvin’s emotional report for Channel 4 News on the Syrian government’s bombing of Homs in 2012. Colvin was killed the next day.

A section called “Chaos” draws a link between the English civil war in the 1640s and recent reporting of the Brexit campaign. “Both happened at times when new types of media were emerging and old models of control collapsed, resulting in division and chaos,” says the explanatory board.

Partisanship in the media is illustrated by contrasting front page reports of the anti-fascist Battle of Cable Street in 1936. The Daily Worker, then the paper of the Communist party, headlined its coverage: “East London routs the Fascists”. The Blackshirt, the paper of the British Union of Fascists, hailed a victory against the “Red Mob”.

The exhibition also looks at the media and the public’s unwavering interest in crime and celebrity, the power of language, satire, and issues around verification.

The oldest item on display is the earliest surviving printed news report, on the Battle of Flodden in 1513. The most recent is a live feed of trending news stories at this moment, whenever that is.

The British Library is partnering with about 50 libraries around the UK that will display material from the London exhibition alongside locally sourced material.

Samira Ahmed, the chair of a panel that advised on the exhibition, said it showed “how news has always connected us as citizens, from Tudor times to the present. It shows how confronting the truth, sometimes in the face of official censorship and control, is so valuable.”

Breaking the News is at the British Library in St Pancras, London, until 22 August.