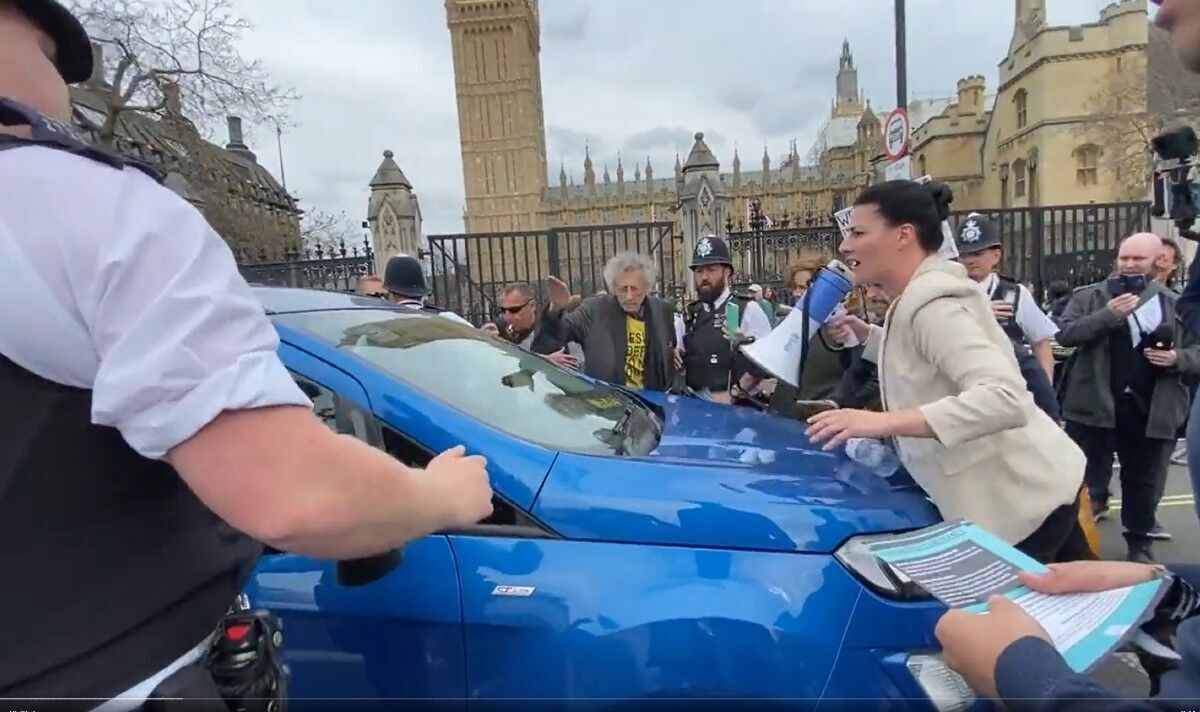 With the PM about to face MP’s for the first time since the Easter break, and receiving his fine for breaching Covid lockdown rules, tension is high outside the house. Protesters can be seen waving flags and banners suggesting the Government cannot be trusted to make decisions.

At one point, a vehicle can be seen ramming Piers Corbyn prior to police arriving to secure the scene.

Protesters were quick to slam the driver with one, in particular, shouting a flurry of profanities at the driver, calling on the police to “arrest the criminal.”

Various photographers and journalists were filming the incident with around 30 or 40 protesters present outside the gates of the iconic building.

The irate protester was seen holding a sign reading “No to online harms bill – Yes to freedom of speech.”

Another, an elderly woman held a sign saying: “We cannot trust the Government to make the right decisions for the people.”

Following the incident, rumours on Twitter suggested the driver of the vehicle was Conservative MP Bob Blackman.

A Tweet by Lister read: “The dangers of standing in the road as Piers Corbyn tries to get himself run over.

“They’re claiming it is Tory MP Bob Blackman in the blue car.”

Another, Brendon May said: “What are they protesting about? We don’t have any covid rules!”

As the protest came to an end, Lister Tweeted: “Pandemonium is over for now as they’ve now cleared the road.

“There’s probably about 30 people on this protest as you can see most of the passerby observers have left the scene also.”

He added: “Pandemonium resumes as the weirdos and misfits have more passersby watching the chaos than they have actually joined them in their bread and circus.

“Half an hour after the incident, Bob Blackman is finally allowed to leave the scene after they swapped details for I assume a potential insurance claim.”

Do the protesters have a point over “freedom of speech”? Should the police have prevented the protest from taking place? Why are anti-vaxers protesting? Let us know what you think about this by CLICKING HERE and joining the debate in the comments section below – Every Voice Matters!

The protest came as PM Mr Johnson was on his way to address the Parliament for the first time since the Easter recess.

Speaking at the dispatch box, Mr Johnson apologised fully for his actions and stated he had paid any fines imposed.

Labour Leader Sir Keir Starmer was quick to slam the PM, starting his counter with “What a joke”.