Two women were filmed brawling while a man was recorded beating a woman in Hyde Park as several fights broke out between cannabis-smoking youngsters at yesterday’s 420 event.

Marijuana lovers unite for the Hyde Park rally every year on April 20 to demand the drug is decriminalised.

However, yesterday’s event appeared to be a bad-tempered affair with several fights breaking out.

Footage showed two women brawling on the floor before being separated and detained by police officers.

However, onlookers hit out at the officers after one of the brawlers, a black woman, was seemingly arrested, while the other, a white woman, was not.

Meanwhile, a second video showed two men fighting with two women, with one of the men delivering several punches to his opponent as they rolled around the floor. 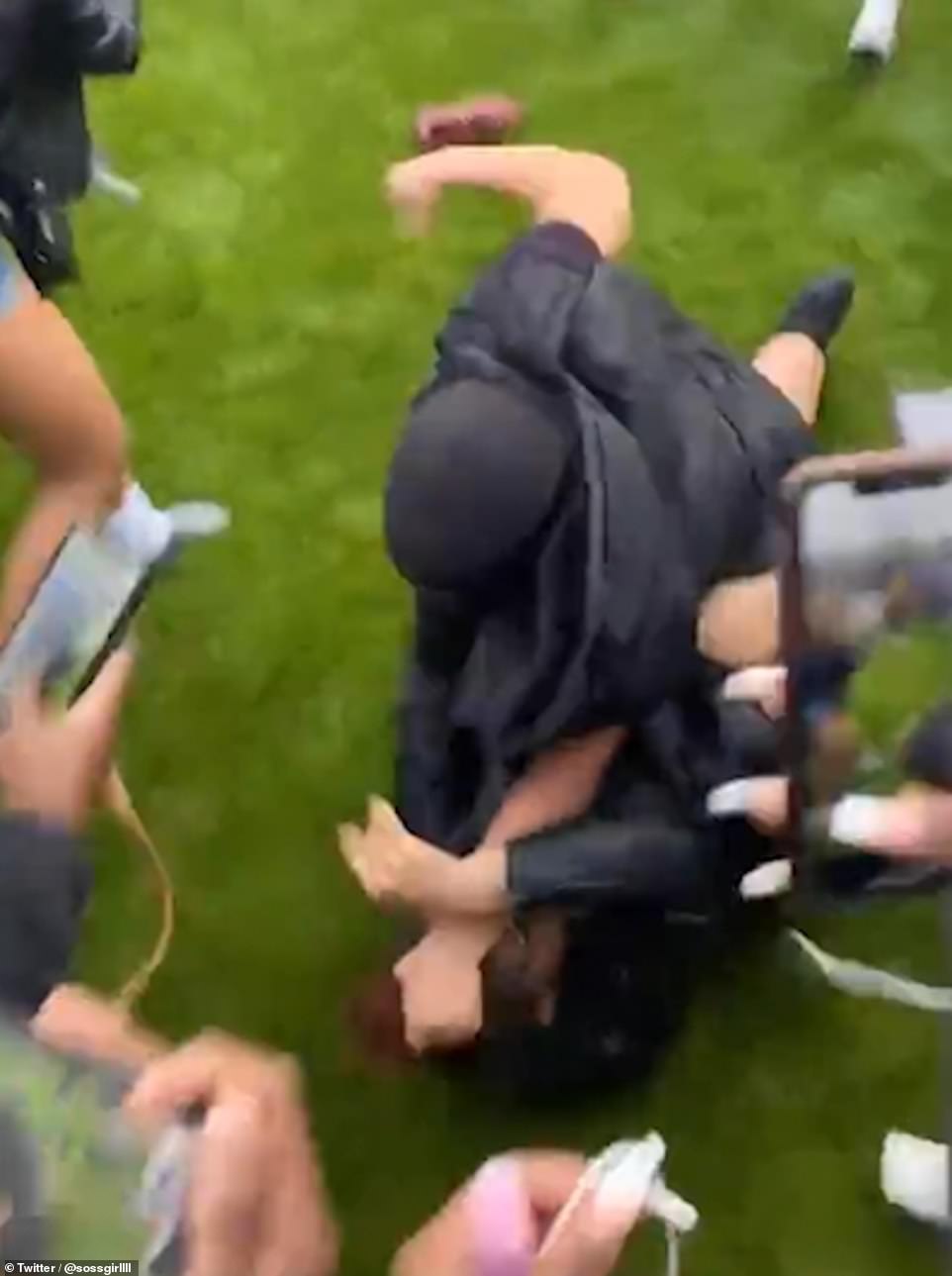 The Met Police has been contacted over the claims of racism.

Another clip from yesterday, showed dozens of officers using dogs to disperse attendees who had left Hyde Park at around 9pm, with one detective saying some were ‘involved in assaults’ with a ‘machete seen’.

One clip appeared to show a German Shepherd nipping at a man’s leg, causing him to fall to the ground as screams and car horns could be heard blaring in the background.

Superintendent Dan Ivey wrote on Twitter: ‘This was a proportionate response to a large crowd leaving the park, some involved in assaults, with a machete seen, one knife recovered, along with a knuckle duster. All is now calm. Ten arrests made.’

Earlier in the day, clouds of smoke rose above large groups and music boomed from sound systems as attendees took over London’s Hyde Park and Woodhouse Moor in Leeds.

One attendee could be spotted grilling meat on a barbecue while a number of stalls were set up selling smoking paraphernalia such as bongs.

And another person claimed to have spent £650 on a huge joint, saying: ‘It took me six hours just to grind up. It cost between £650 and £700. I split it with my mate, we just bought it straight out.’

Growing, possessing or distributing the Class B drug is against the law, but some councils in the UK don’t pursue those who use cannabis for ‘personal use’.

While police usually turn a blind eye to the gathering – as long as people remain calm and good-natured – the law states that anyone caught with cannabis can be issued a warning or an on-the-spot fine of £90.

The annual ‘420’ tradition is said to have started in America because April 20 in the U.S. date format reads as 4/20.

There are many stories behind the significance of the number in stoner culture, but the most common is that 4.20pm is touted as the best time of the day to start smoking the narcotic.

There are drug and cannabis-related rallies worldwide, but Hyde Park is known as the largest in the UK.

Last year – when outdoor gatherings were only permitted for groups of up to six people – cannabis fans flocked to the park despite police warning that £200 fines would be issued for those flouting lockdown rules.

In 2017, 12 people were detained by police at the rally. And the 2015 pro-cannabis rally saw more than 50 people arrested, despite claims from organisers that the event was peaceful.

The term 420 is thought to have been created by a group of high school students looking to arrange a time to meet up, smoke marijuana and search for plot of land grow more of the cannabis plant. 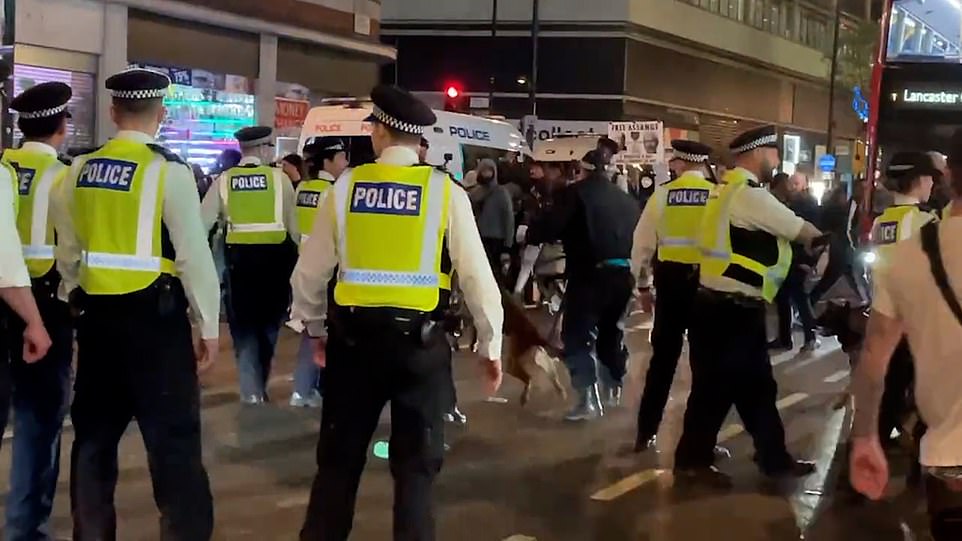 Footage (still above) captured dozens of officers using dogs to disperse attendees who had left Hyde Park at around 9pm, with one detective saying some were ‘involved in assaults’ with a ‘machete seen’ 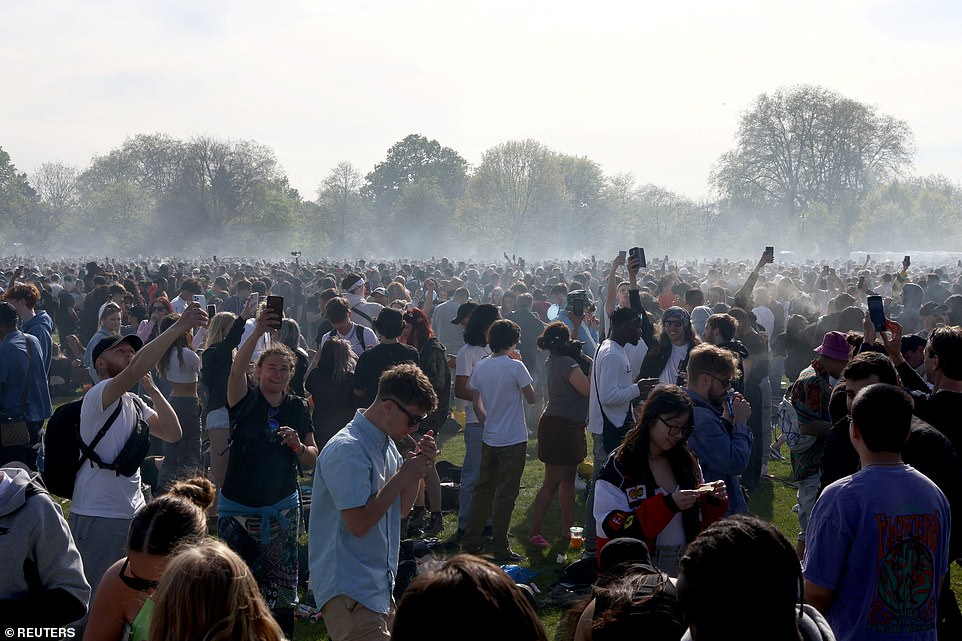 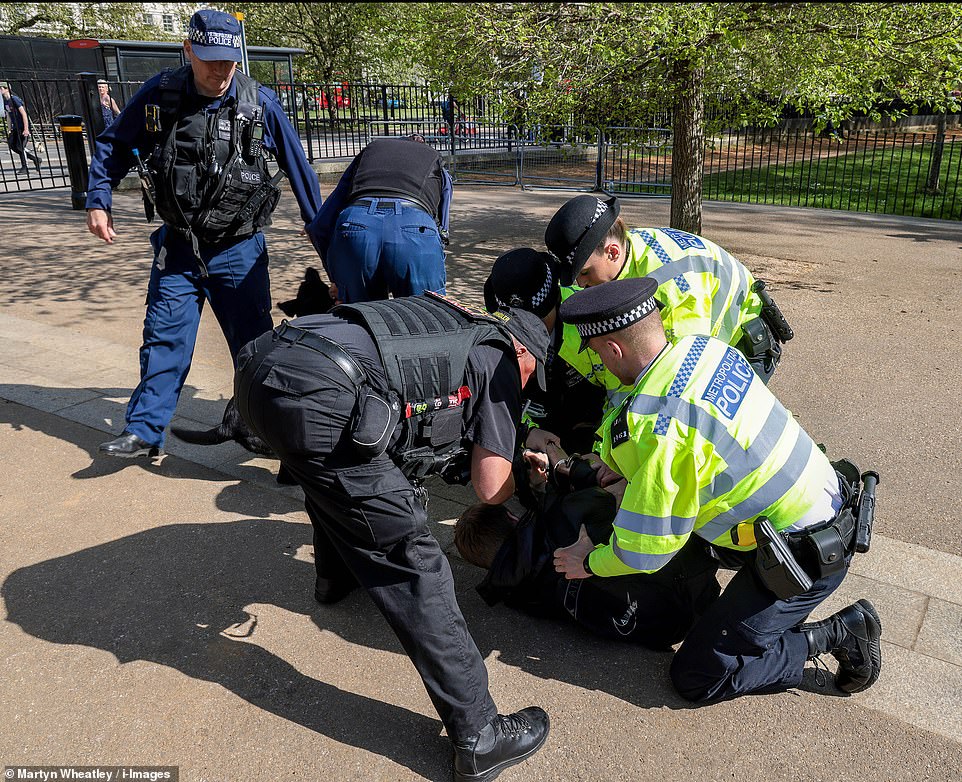 A man was seen being arrested (above) after refusing to throw away his stash and ‘reacting angrily’ to Met Police officers, reports MyLondon. Anyone caught with cannabis can be issued a warning or an on-the-spot fine of £90 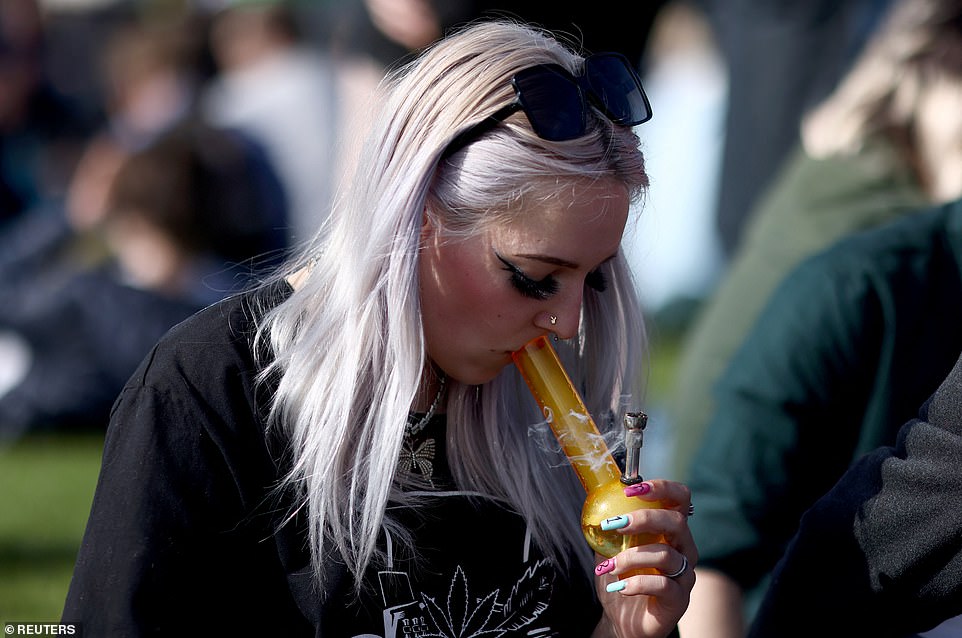 A woman smokes during a demonstration to mark ‘420’ day in Hyde Park, London. A number of stalls were set up selling smoking paraphernalia such as bongs 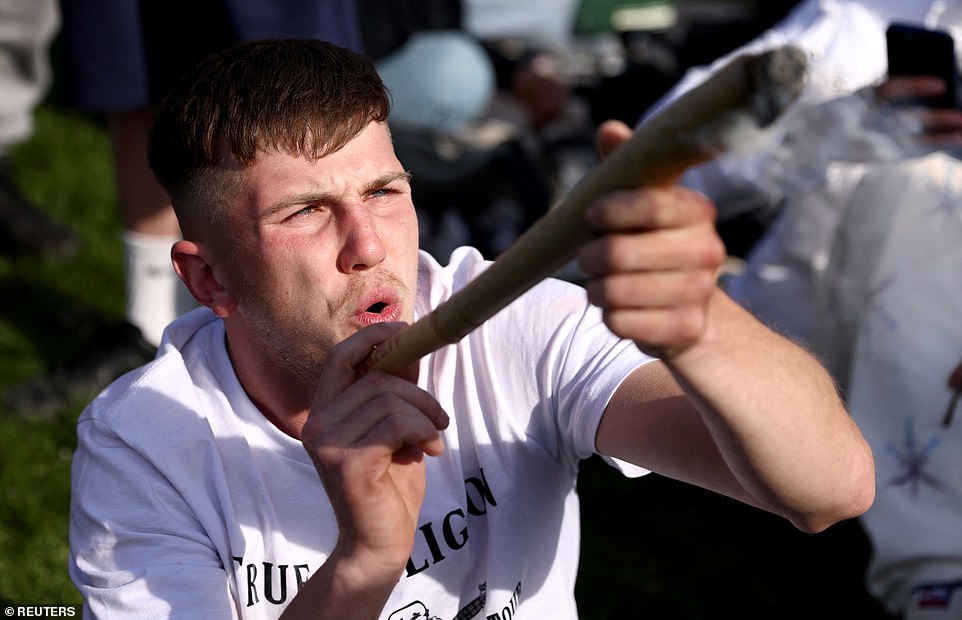 A man smokes a joint during a rally to mark ‘420’, the unofficial cannabis holiday, in Hyde Park, central London, on Wednesday 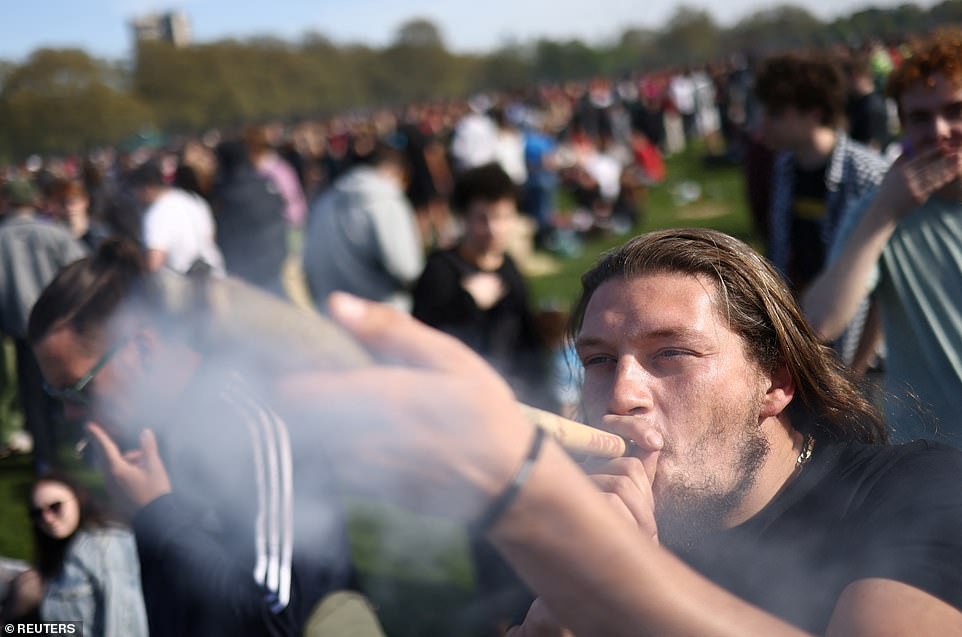 A man smokes a joint during a demonstration to mark the informal cannabis holiday in Hyde Park, London, on Wednesday

According to High Times, the cannabis magazine, in 1971 five students at the San Rafael High School in California decided to meet every day at 4.20pm to smoke marijuana by the school’s statue of Louis Pasteur.

The password for the meeting was ‘420 Louis’. The five students called themselves ‘the Waldos’.

The magazine then says the term faded into obscurity only to gloriously be brought back by a connection to the Grateful Dead band, at whose shows mysterious 420 flyers began popping up.

The Waldos insist on their website that they weren’t stereotypical stoners, and shouldn’t be confused with Spicoli from the movie Fast Times at Ridgemont High or comedy duo Cheech and Chong.

It wasn’t long before High Times got wind of 420 and started using it in the magazine, officially declaring  the Waldos as the true creators of the term in 1988,

‘I started incorporating it into everything we were doing,’ High Times editor Steve Hager told the Huffington Post. ‘I started doing all these big events — the World Hemp Expo Extravaganza and the Cannabis Cup — and we built everything around 420.

‘The publicity that High Times gave it is what made it an international thing,’ he added. Until then, it was relatively confined to the Grateful Dead subculture. But we blew it out into an international phenomenon.’

For decades now, the term 420 has been used in festivals and events, merchandise, store names, and even roommate listings and dating profiles. And of course, April 20 — written 4/20 by Americans — became an unofficial stoner holiday.

In 2017, it was added to the Oxford English Dictionary. 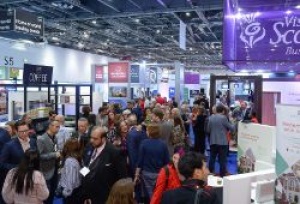 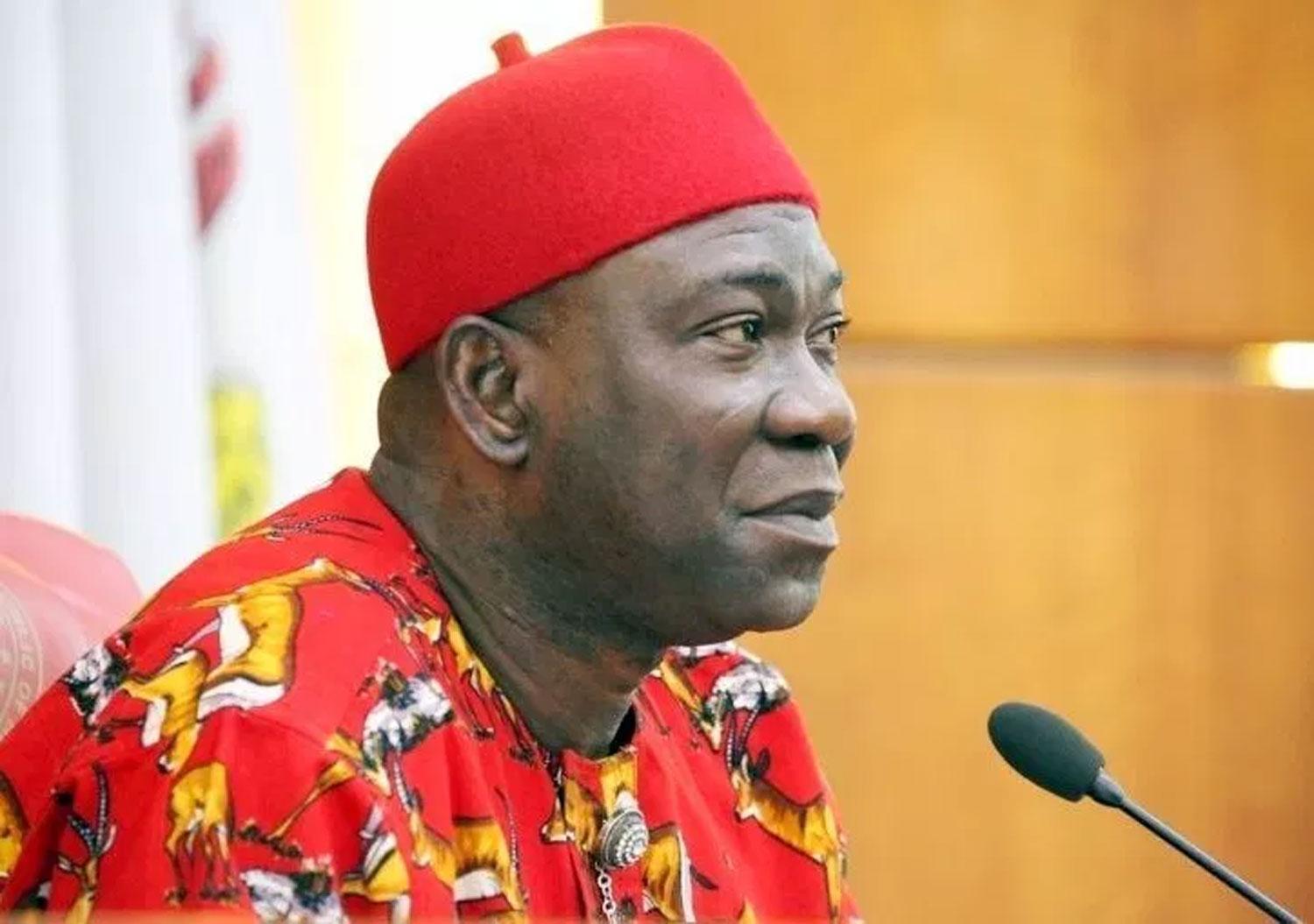 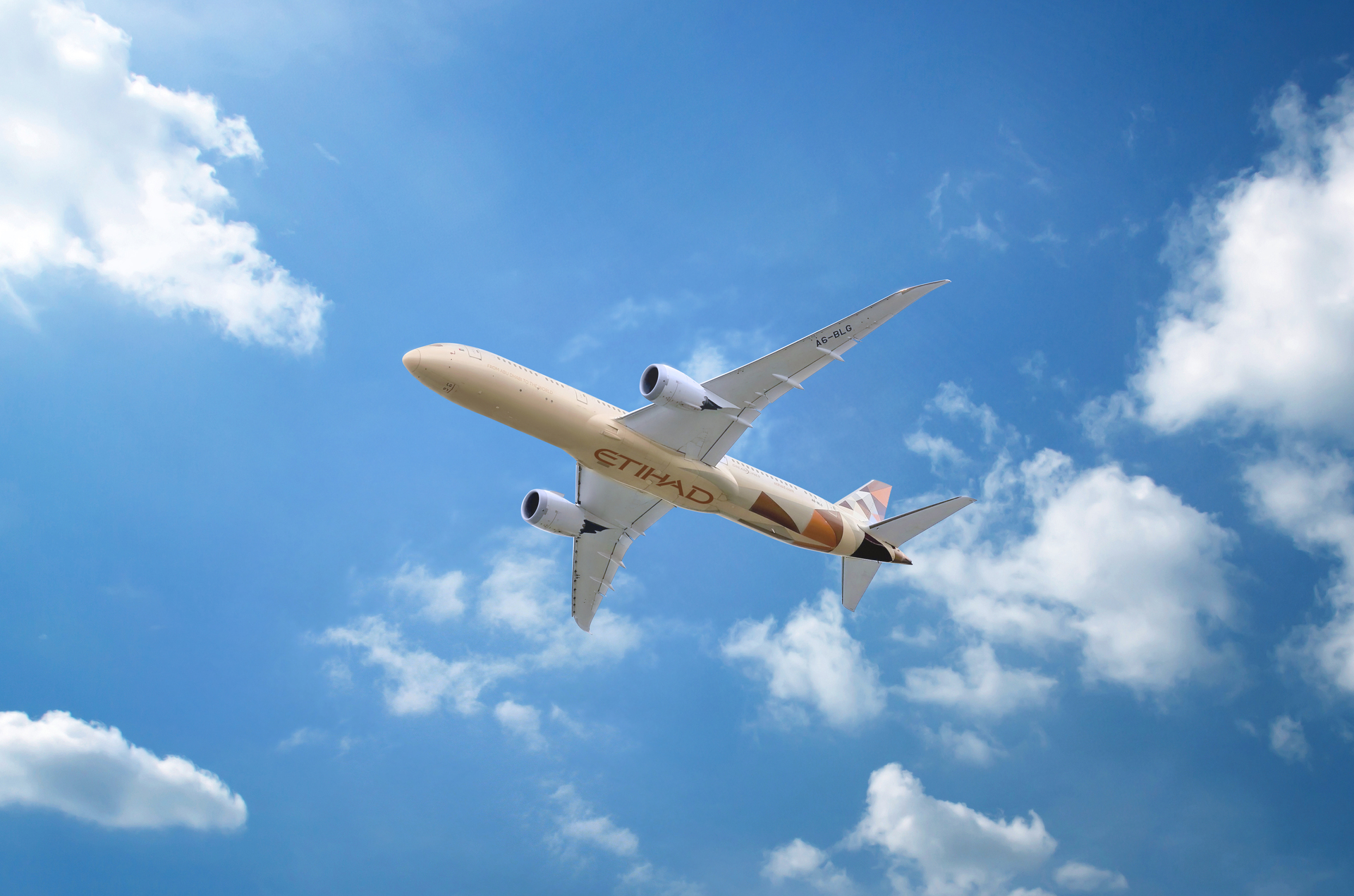