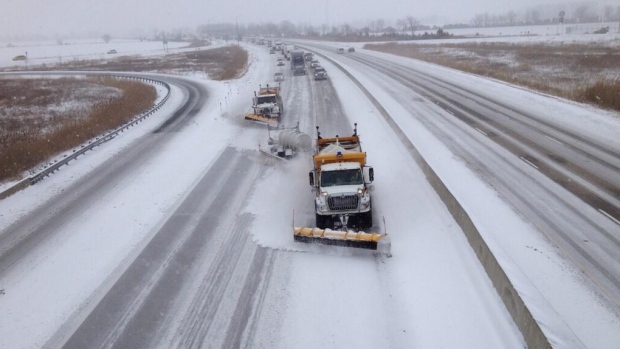 A spring storm hitting southern Ontario, which is expected to bring up to eight centimetres of snow by Tuesday, is causing messy conditions on the roads.

Environment Canada issued a winter weather travel advisory on Monday for most of southern Ontario.

The Greater Toronto Area is expected to receive between four and eight centimetres of snow, which started falling Monday afternoon and will go through to Tuesday.

“Visibility may be suddenly reduced at times in heavy snow,” Environment Canada said Monday. “Be prepared to adjust your driving with changing road conditions.”

The Ontario Provincial Police are warning drivers to slow down and drive according to the weather conditions after a serious crash on Highway 401 near London Monday afternoon.

Police said officers are “amazed” there were no fatalities after a truck slammed into the back of a van on Highway 401 near Union Road.

#OPP officers amazed that there were no fatalities involved in this collision on #Hwy401 near Union Rd. Clean up continues and road closures remain in effect. Updates to follow. A BIG #thankyou to all the emergency services, tow operators and Good Samaritans that assisted. ^es pic.twitter.com/tUcYqtKUx2

Highway 401 has been closed in the area while the clean up and investigation continues, police said.

The winter weather will clear by Wednesday, when temperatures will rise back to around 10 degrees, under sunny skies, in the Greater Toronto Area.

Remote working to remain a factor for property purcha…