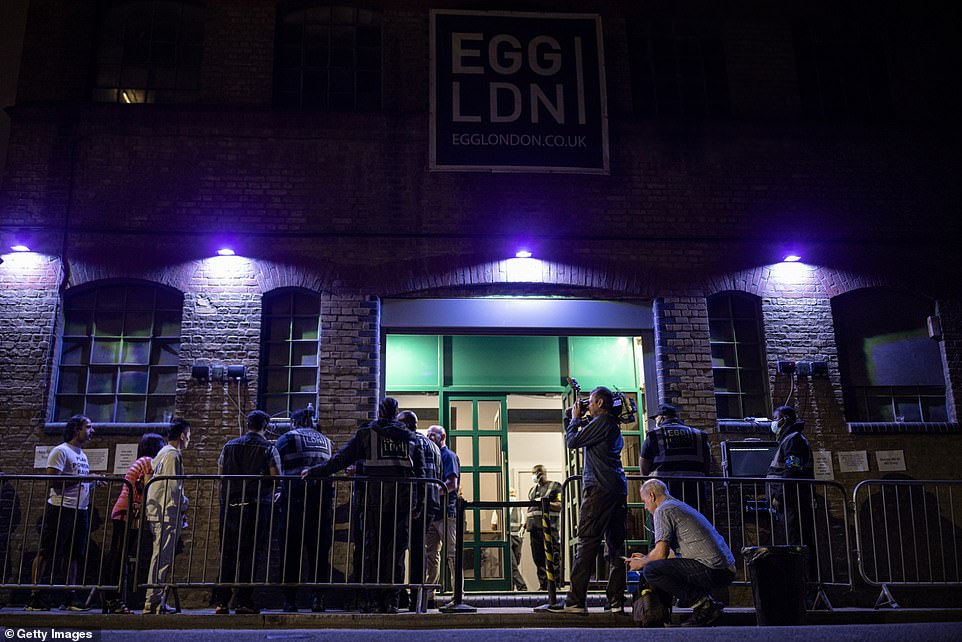 An unruly mob of hundreds of Extinction Rebellion activists including its radical founder Roger Hallam and his girlfriend shamelessly partied at an all-night rave on Easter Sunday to celebrate bringing travel chaos to millions of hardworking commuters.

In a post on Telegram giving details of the gig at Egg nightclub in King’s Cross, North London seen by The Sun, organisers crowed: ‘After a week of sitting down, it’s time to shake those legs. We are inviting all rebels to an after-party full of energetic bands and DJs.’

The eco-fanatics downed £6.50 cans of beer and took skateboards, drums and flags to the party – but removed pin badges for safety reasons – with some seen staggering out of the club early yesterday.

Hallam, the mastermind of XR and its splinter group Insulate Britain who has called for those ‘responsible’ for climate change to face Nuremberg-style trials, and XR activist Larch Maxey, were both pictured entering the security-tight nightclub.

Other photos from the party published by The Sun show banners which yelled ‘We are watching you’ and ‘War is ecocide, planet repairs now’.

A source told the newspaper: ‘It was a full-on rave. Everyone was drunk and some of them looked high. They were dancing all night. When Roger came in it was a bit like he was a celeb. Everyone wanted a selfie with him.’

Last week the rabble-rousing eco-idiots blocked ten oil facilities and took over four of London’s bridges as they launched a series of ‘disruptions’ on more than two weeks of protests.

People queue to get in to the Egg London nightclub in the early hours of July 19, 2021 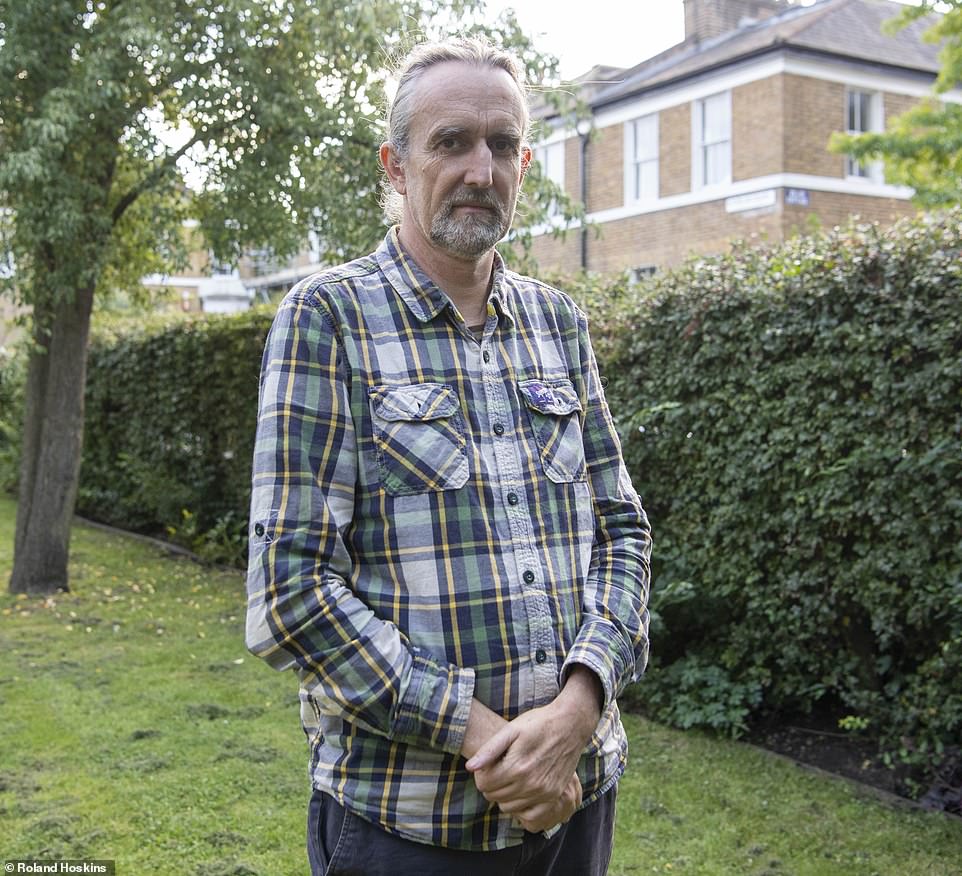 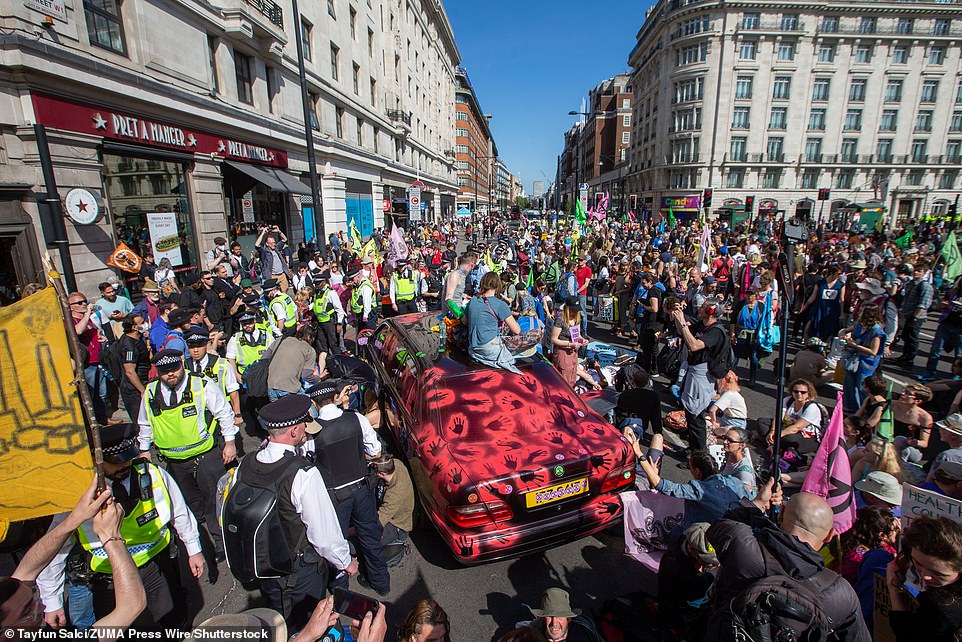 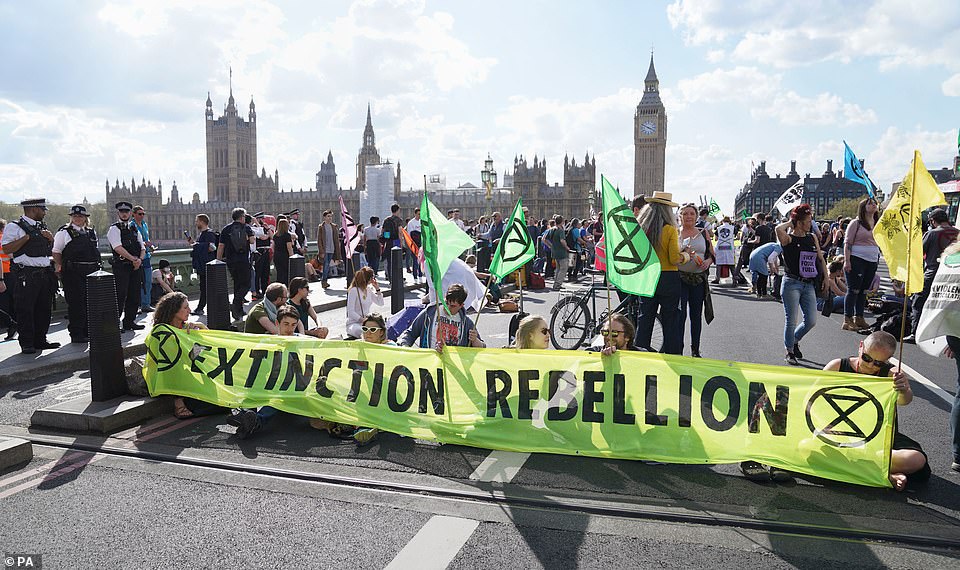 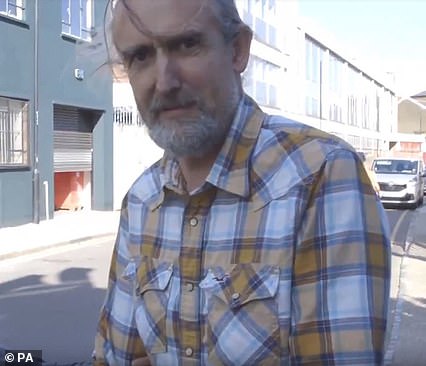 Farmer Roger Hallam, who helped found Extinction Rebellion, before leaving to joining protest organiser Insulate Britain, wants to ‘bring down all the regimes in the world’, starting with Britain, and believes those running society ‘should have a bullet through their heads’.

There have been allegations of a ‘cult-like’ following for the Welshman who compares his tactics to those of heroic activists Gandhi and Martin Luther King.

He is said to have been inspired to take up climate activism after his farm in Wales went bust due to bad weather.

Ironically, Mr Hallam owns a farmhouse which was described as ‘poorly insulated’ in an official energy performance certificate. His 2,000 sq ft farmhouse in Carmarthen, South Wales, was given the lowest possible energy rating on the certificate. It is unclear if Mr Hallam has taken steps to improve the rating since it was issued six years ago.

Asked about the certificate, a spokesman for the group said: ‘This is the point – UK homes are the leakiest in Europe, with many millions of families being unable to afford the advice and help needed to insulate the building they live in.’

Hallam has also compared the murder of six million Jewish people at the hands of the Nazis to other historical massacres and claimed that memory of the Holocaust was holding Germany back. He was quickly condemned by Extinction Rebellion groups in Germany after his comments with a newspaper in the country.

In an English-language interview he told Die Zeit: ‘The extremity of a trauma…can create a paralysis in actually learning the lessons from it. The fact of the matter is, millions of people have been killed in vicious circumstances on a regular basis throughout history.’ He cited the Belgian colonialists who ‘went to the Congo in the late 19th century and decimated it’.

‘Was it just the top Nazis or was it the small guys?’ He added that ‘maybe [we] should put a bullet in the head’ as punishment.

XR members convened in Hyde Park on Saturday before one group – which included two former Olympians – climbed onto a Shell oil tanker at nearby Bayswater, leading to several arrests.

But in their ‘mass action’ event of the day, they targeted the landmark near Speaker’s Corner, lighting flares and playing bongos in the middle of the road as infamous activist Swampy was seen climbing the 45-foot-tall monument.

The group had prepared the disruption ahead of time, getting hold of a black limousine and parking it in the road of the road for activists to lock or glue their hands to.

Holly-Anna Petersen, a Christians of Extinction Rebellion activist, revealed: ‘Blocking the road at Marble Arch, by people locking onto a limo. Massive well done to all those who made this possible.

‘It’s ridiculous that we’re still having to do this. Arrests happening now. By the way – the people in the car are @XRebellionUK people too!’

It comes after Extinction Rebellion protesters blocked four of London’s busiest bridges on the first day of the Easter bank holiday weekend.

Hundreds of Extinction Rebellion activists were on Waterloo, Blackfriars, Lambeth and Westminster bridges, calling for an end to new fossil fuel investments.

Some of their actions have proved questionable, after the bridge stunts affected several routes for London buses, which are either eco-friendly or emit zero exhaust emissions.

It a video clip seen on Sky News on Thursday, a interviewee claimed the group had mistakenly stopped a tanker that was carrying cooking oil, rather than fossil fuels.

Earlier, activists who have infiltrated an oil plant near Birmingham vowed ‘we’ll be here as long as we can’ after climbing on top of the facility as part of a series of dawn protests.

Eco-zealots from Just Stop Oil have managed to climb on top of a loading bay at Kingsbury Terminal in Warwickshire after gaining access to the facility in the early hours of this morning.

Members of the group – who aim to put pressure on the Government to block new oil and gas projects in the UK – have also climbed on top of an oil tanker at Gray’s Terminal in Essex and have targeted the nearby Navigator Terminal in Thurrock.

In a video, posted on the Just Stop Oil Twitter account, one activist said: ‘In the early hours of this morning seven of us climbed up in amongst the pipes of the loading bay, blocking the terminal.

‘We intend to stay here as long as we can, or until the Government decides to stop all new oil and gas projects.’

Tempers flared between lorry drivers and activists at one protest, with one haulier seen appearing to yank an activist off a tanker.

A number of key operators including Navigator Thames, ExxonMobil and Valero gained their injunctions in the last few days, the Department for Business, Energy and Industrial Strategy (BEIS) said.

It comes as dozens of climate activists were charged after arrests were made at protests at oil depots.

The Just Stop Oil activists say they arrived in the early hours of Friday at the Kingsbury terminal near Tamworth, Staffordshire, as well as the Navigator Oil terminal in Thurrock and Grays oil terminal, both in Essex.

The recently imposed injunctions aim to prevent protest activity at oil sites across the UK. 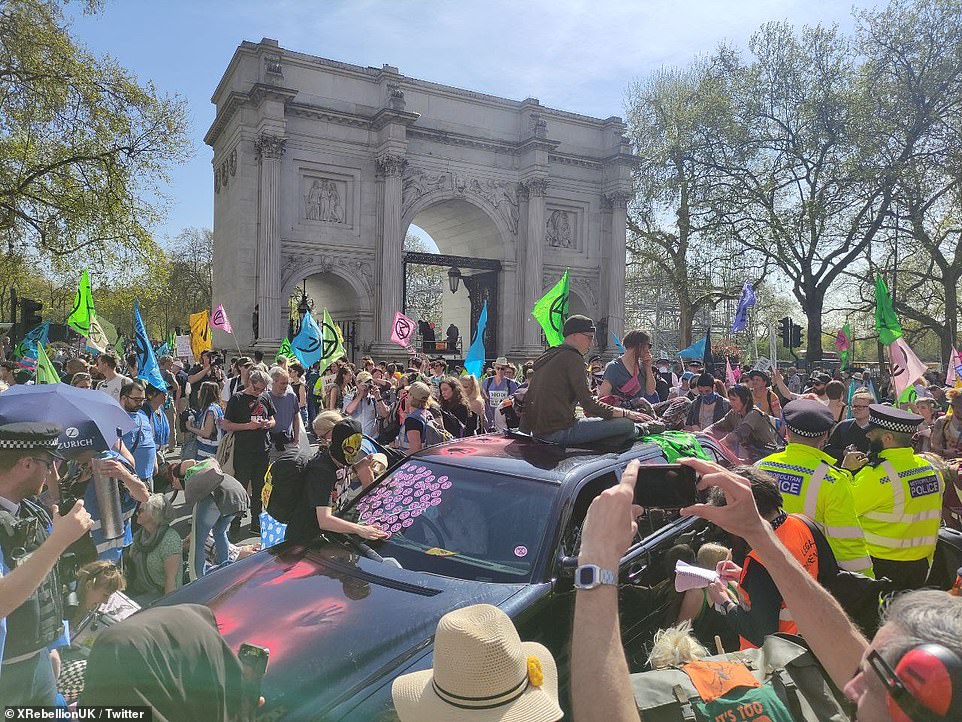 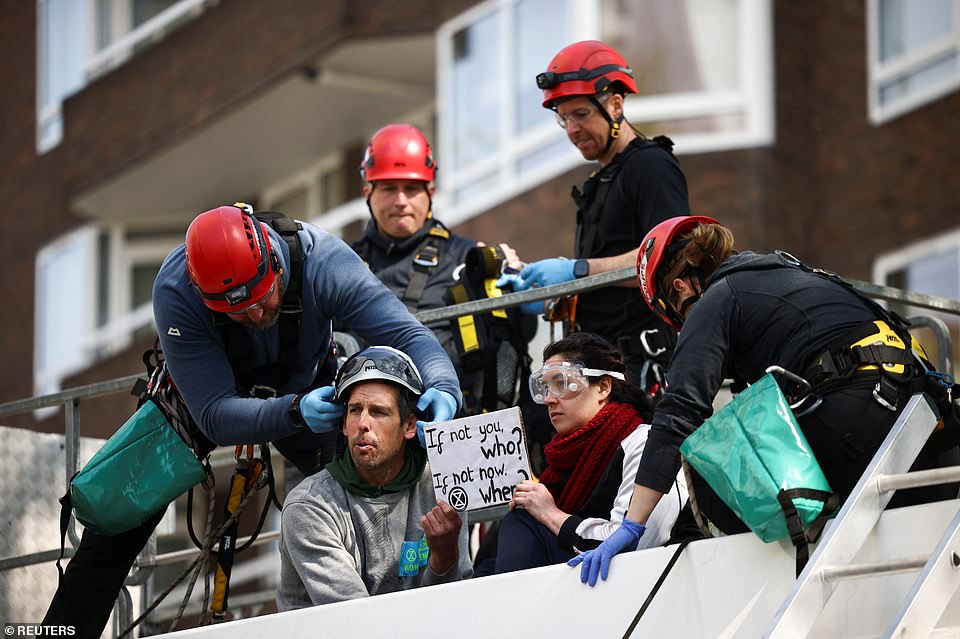 Police officers place a hard hat on Etienne Stott, former Olympian, as they attempt to remove him and an activist from an Extinction Rebellion protest in central London, April 16, 2022 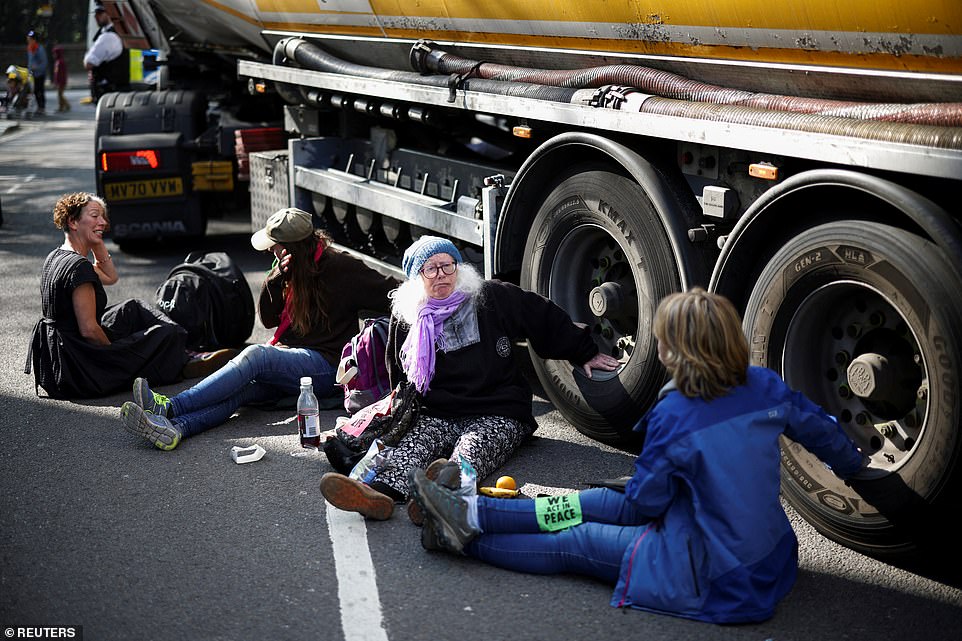 Activists from Extinction Rebellion glue their hands to an oil tanker during a protest in London, April 16, 2022 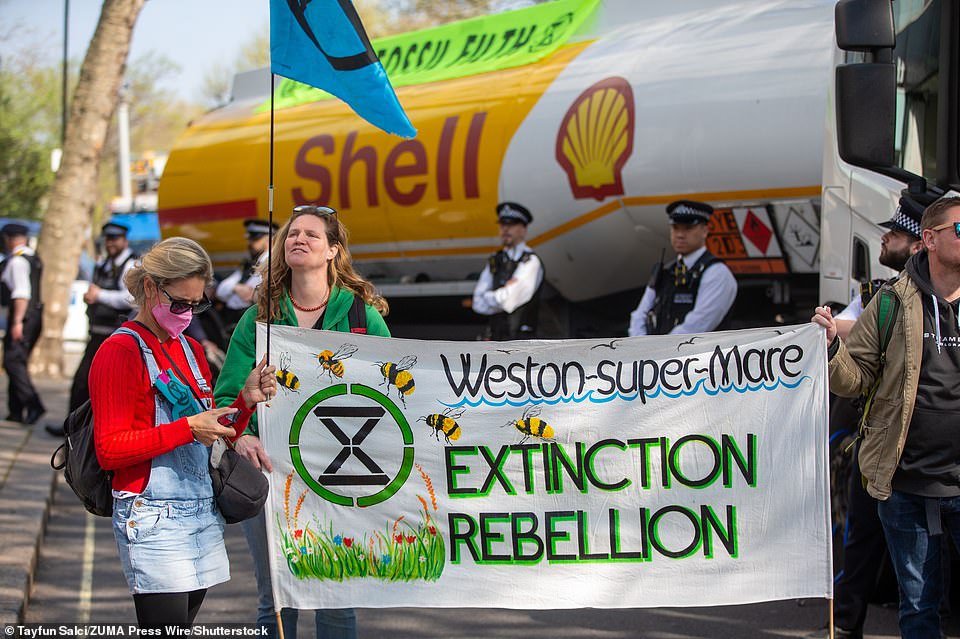 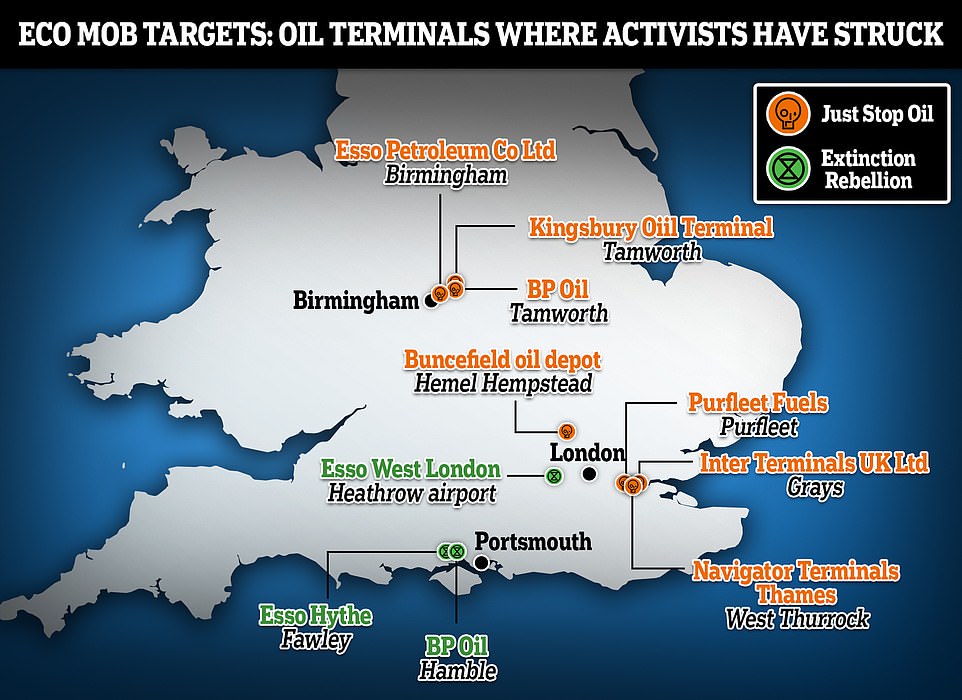 The group, along with Extinction Rebellion (XR), have targeted oil sites across the country across April

Energy Minister Greg Hands said: ‘While we value the right to peaceful protest, it is crucial that these do not cause disruption to people’s everyday lives.

‘That’s why I’m pleased to see oil companies taking action to secure injunctions at their sites, working with local police forces to arrest those who break the law and ensure deliveries of fuel can continue as normal.’

Valero Energy had obtained a High Court injunction against a number of environmental groups and ‘persons unknown’ following recent protests at the Kingsbury terminal.

It bans anyone from damaging any part of the land at each of the firm’s sites, from ‘affixing themselves to any other person or object’ on the land or parts of access roads, and from building any structure.