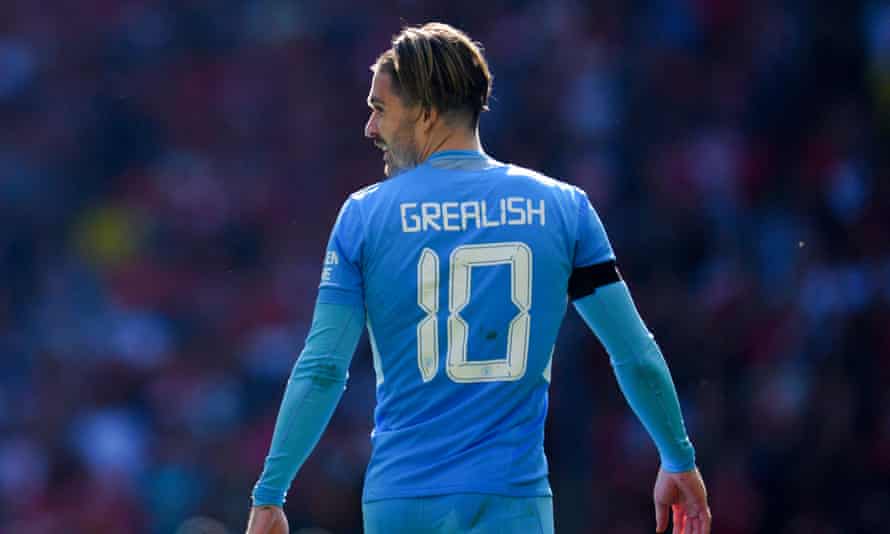 1) Werner still quite the curate’s egg

In the summer of 2020, Liverpool were big favourites to sign Timo Werner from RB Leipzig before the move fell through when Jürgen Klopp could not assure his fellow German of regular first-team football. Liverpool fans have spent the last couple of seasons relieved that the striker chose Chelsea instead, his numbers way down on what they were in the Bundesliga. Werner remains a maddening but intriguing presence. Watch the denouement of the FA Cup semi-final. In the final 10 minutes, he overruns the ball to ruin a fast break, has the energy to get back and halt a Palace counterattack, is named man of the match, flashes a cross into the box with no Chelsea shirt in sight, drives into the area again to put the ball on a plate for Romelu Lukaku, who hits a post, and rounds it all off by ballooning a dreadful shot into Row Z. There is Werner’s Chelsea career in microcosm. Wild, erratic and inconsistent and yet he’s capable of being the biggest threat to Klopp and Liverpool in next month’s FA Cup final. David Tindall

2) Liverpool are masters in recruitment

Liverpool’s previous great era of the 1970s and 1980s owed its longevity to a careful evolution of the squad. One or two players at a time would be quietly added to augment and eventually supplant those in the first XI. Decades on, and with top-level football a squad rather than team game, Jürgen Klopp’s Liverpool is doing much the same, with recent additions making big contributions to the club’s push for multiple trophies. Ibrahima Konaté’s header for Liverpool’s first was the latest showing of his power in the air while Luis Díaz’s energy and devilment caused Manchester City huge problems as Liverpool compiled the 3-0 first-half lead that eventually took them through to the final. Diogo Jota, last season’s addition, has already proved indispensable in the forward line. Though Manchester City have the greater financial muscle, Liverpool are keeping pace via careful recruitment of players finding it easier to adapt than Jack Grealish so far has. John Brewin

Anti-Glazer protests, a two-goal lead lost before Cristiano Ronaldo’s third sealed another late win, and next up Liverpool at Anfield: these are difficult days at Manchester United. Ralf Rangnick was supremely critical of how his team defend: not physical enough, in essence. Of Tuesday’s opponents, the German was glowing. “They are extremely good. It’s no coincidence that they’re as good as they are. Jürgen has built that team over the last six and a half years. Six or seven of those players used to be my/our players, we signed them for our clubs when nobody knew them.” As Schalke and RB Leipzig manager, and director of football of the latter club as well as RB Salzburg, Naby Keïta, Takumi Minamino, Ibrahima Konaté, Joël Matip and Sadio Mané have all been under Rangnick’s tutelage. United, though, are a universe away from their great rivals. Jamie Jackson

4) Trossard makes the difference once again

For the second time this season, Leandro Trossard scored a 90th-minute winner in London. And, for the second time in a week, the Belgian scored a goal that did damage to a north London club’s hopes of making next season’s Champions League. Trossard’s goal at Tottenham was not dissimilar to his late winner at Brentford in September, cutting in from the left and giving the opposition goalkeeper no chance with a driving right-foot finish. With the same foot he had smashed in the opener at Arsenal the previous week. Brighton struggle to score goals, Trossard’s winner at Spurs only their fourth in nine Premier League matches, but given the chance he can be a neat, cool finisher. Brighton’s winner might have come late but was fully deserved. Trossard heavily contributed to aggressive pressing that squeezed down supply lines as Yves Bissouma dominated Tottenham’s midfield trio. John Brewin

Mikel Arteta has acknowledged there will be psychological ramifications if Arsenal miss out on qualifying for the Champions League for a sixth successive season. After a third straight defeat arguably the biggest challenge before they visit Chelsea on Wednesday will be the mental strain. At 30, the former Southampton defender Cédric Soares was Arsenal’s oldest player in a starting XI with an average age of 23.5 at St Mary’s – Granit Xhaka was the only other starter over the age of 24 – and Arteta recognises this is new territory for most, emphasising that his squad need “all the support in the world” if they are to secure a top-four place. “They are 19, 20 and 21 years old, most of them,” Arteta said. “We are in the same position where we were with one less game. We have to liven them up. And the task is big. But the opportunity [is] as well. It’s so precious.” Ben Fisher 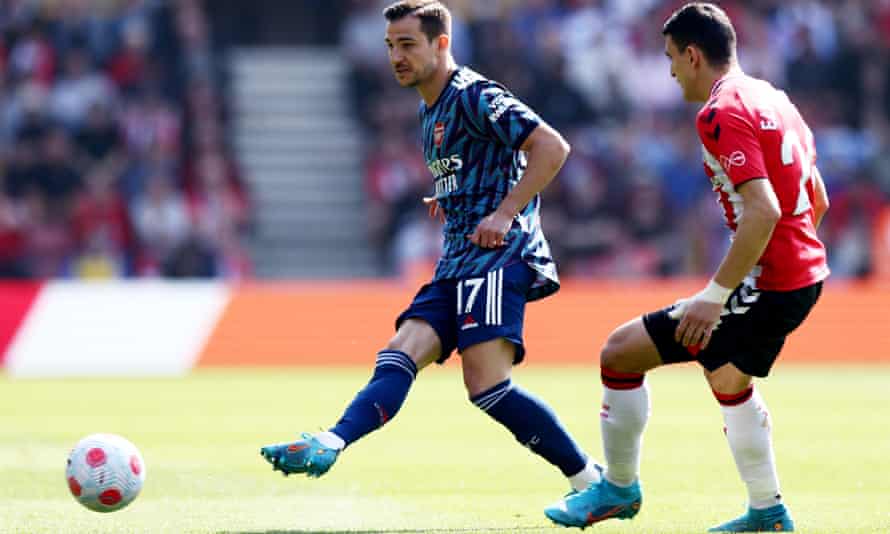 6) Cornet is not a man for the big moments

Maxwel Cornet was a constant, much-needed threat at West Ham. His corner led to Burnley’s goal, and his clever diagonal run fashioned a second-half chance Jay Rodriguez ought to have done better with. On the stroke of half-time, Cornet won a penalty; a sublime touch to control Josh Brownhill’s pass and brought down after a jink past Lukasz Fabianski. Taking responsibility for the spot-kick, Cornet’s approach had the fluidity of ice – his chance to double the lead went low and well wide. Seven days previously, his glaring miss cost his side an equaliser at Norwich. Harsh to say four points dropped? Probably. But seasons are made on such fine margins. Sam Dalling

Even if his manager has seen him play better than in Brentford’s third successive victory, which took them to 11th, there is no doubting the difference Christian Eriksen has made. The Denmark midfielder’s assist for Pontus Jansson’s late winner against Watford was the second he has provided since joining on a short-term deal until the end of the season, with a goal against Chelsea in the 4-1 win at Stamford Bridge sandwiched in-between. But while Tottenham supporters will be wary of Eriksen’s threat when Antonio Conte’s side travel to west London on Saturday, Frank insisted that the 30-year-old still has room for improvement. “To be fair, I don’t think he was that good today,” said Frank. “A solid game, but [there’s] more to come from him.” Ed Aarons 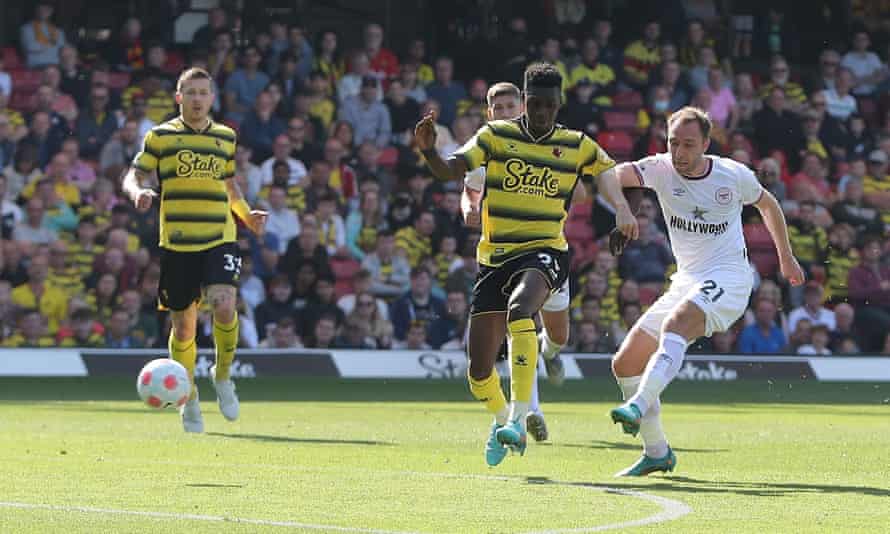 For a manager who had just lost to a rather harsh 95th-minute goal, Leicester’s Brendan Rodgers proved refreshingly magnanimous. “I’m so happy for the supporters here,” said Rodgers, displaying a characteristic touch of class as he praised Eddie Howe’s impact on Tyneside. “It’s one of the grounds and cities I’ve always enjoyed coming to. Newcastle’s one of the most iconic clubs in British football; it’s a special place.” On a day when Leicester, with Kiernan Dewsbury-Hall outstanding, dominated possession, it took two goals and a special performance, from an extra-special player to secure the three points that all but banished Newcastle’s relegation fears. Howe bought extremely well in January but the £33m spent on his marquee signing, the Brazil playmaker Bruno Guimarães from Lyon, looks an excellent investment in a pretty much complete midfielder who has already established himself as a cult hero. Louise Taylor

Liverpool know all about a goalkeeper messing up in a huge match so may have felt some karmic payback after Zack Steffen’s spectacular Wembley bungle. Just a week on from Ederson’s heart-stopping clearance from across his goalline at the Etihad, perhaps it was unfortunate timing that Steffen had been given such a recent reminder that keeping cool and playing out from the back is a non-negotiable modus operandi for a Manchester City goalkeeper. Ederson avoided the calamity but Steffen was punished. Should the American have been playing in the first place? Yes, he’s appeared in previous rounds but away ties at Swindon and Southampton along with Fulham at home aren’t exactly in the same category as a Wembley semi against Liverpool. Jürgen Klopp went with reserve goalkeeper Caoimhín Kelleher in the Carabao Cup final but there was one crucial difference: the Irish stopper had a first-choice defence in front of him. Steffen did not. There are times to give the No 2 a go but this wasn’t one of them. David Tindall

Sitting 13th in the Premier League seems a default position for Crystal Palace and yet they are a far more exciting Premier League presence than the one programmed to avoid relegation by Roy Hodgson. But a key figure of the Patrick Vieira revolution was taken away in the FA Cup semi-final on Sunday with Conor Gallagher ineligible to appear against his parent club after Chelsea refused him permission to play. The Gallagher issue was always going to rear its head should Palace lose and the fact that Chelsea’s opener was scored by another former Palace loanee, Ruben Loftus-Cheek, only rubbed salt into the wounds. Gallagher’s goals garner attention but it’s his energy and closing down that Palace missed most. Would the moves that led to Loftus-Cheek and Mason Mount’s second-half goals have been stopped at source with Gallagher on the pitch? The big clubs have enough advantages; the parent club rule does not need to be one of them. David Tindall