On a wet Wednesday in April, spent picking litter and spotting sewage in the River Wandle in Merton, south London, the Lib Dems look beside themselves with enthusiasm.

Ed Davey, the Lib Dem leader, is here to rally his activists with a speech highlighting Tory failures to clean up Britain’s waterways. He arrives in a sharp suit to deliver his party’s local election launch to waiting TV cameras, before gamely changing into wellies for a photo op in the water.

“Soaring energy bills are overwhelming millions of families but this Conservative government doesn’t care or doesn’t get it. Instead of help, the Conservatives are raising unfair taxes again and again,” he says. “And Conservative MPs have voted time and time again to pour filthy sewage into our rivers like the Wandle.”

It may seem an odd message to be giving out in Labour-held Merton – and in fact, a strange place for the party to kickstart its local election effort when it is unmistakably going after Tory rather than Labour voters. This council has never been held by the Lib Dems, unlike nearby Sutton or Kingston. In fact, it has swung from Labour towards the Tories, back to firmly Labour again.

But this set of local elections is about gaining and building on “footholds” where the Lib Dems are strong in nearby areas, says one of the party’s senior electoral strategists.

The party is fairly entrenched in about 27 councils in the UK, with disparate pockets of Lib Dem power in south-west London, Somerset and Cumbria. However, there are few places where the party is poised to take over any councils or even knock the governing parties into no overall control from second place, although they are hoping for a miracle in Labour-held Hull.

The Lib Dem activists have the energy of insurgents, as they hope to replace the Tories as the second biggest party on Merton council. But it is hard to know whether their optimism will translate into hard wins – and the party leadership is not sounding confident about any taking any new councils, despite the scandal-hit position of the Tories nationally.

“It will be tough for us because we won a lot of councils four years ago – Kingston, Richmond and South Cambs. So we are fighting from a high base. There’s a few we can win, but it’s difficult,” Davey says, setting a low bar for success in gaining councillors on 5 May.

Labour currently holds a majority here but the Lib Dems are hoping to make gains, especially in the Wimbledon area.

The last council election in Merton saw 34 Labour councillors elected, 17 Tory, six Lib Dem and three independents. But there is a fairly strong geographical divide between the Labour-Merton and Tory-Wimbledon sides of the council area – and it is Wimbledon, the Conservative-voting seat of the Tory MP Stephen Hammond that the party has its sights on at a national contest.

“We’re hoping to make lots and lots of gains in Merton,” says Munira Wilson, the Lib Dem MP for Twickenham, who succeeded Vince Cable in the seat in 2019.

One of the reasons the Lib Dems are feeling hopeful about Wimbledon is Paul Kohler, their parliamentary candidate who came within 628 votes of ousting Hammond in 2019. A university law lecturer, Kohler is well known in the area for being beaten up so badly in 2014 that he required facial reconstruction surgery. After his attackers were jailed for aggravated burglary, he visited one of them in jail in a restorative justice process.

“People are angry about national politics, they are angry about Partygate and they can see the cost of living affecting them or others,” he says. “There’s lots of decent, soft, ‘One Nation’ Tories who can’t abide the lies or hypocrisy of the Johnson Tory party. It’s not the party they recognise. It’s changed out of all proportion.” In terms of local issues, he says a big focus is “Mucky Merton” – with people annoyed by mess and rubbish collections. 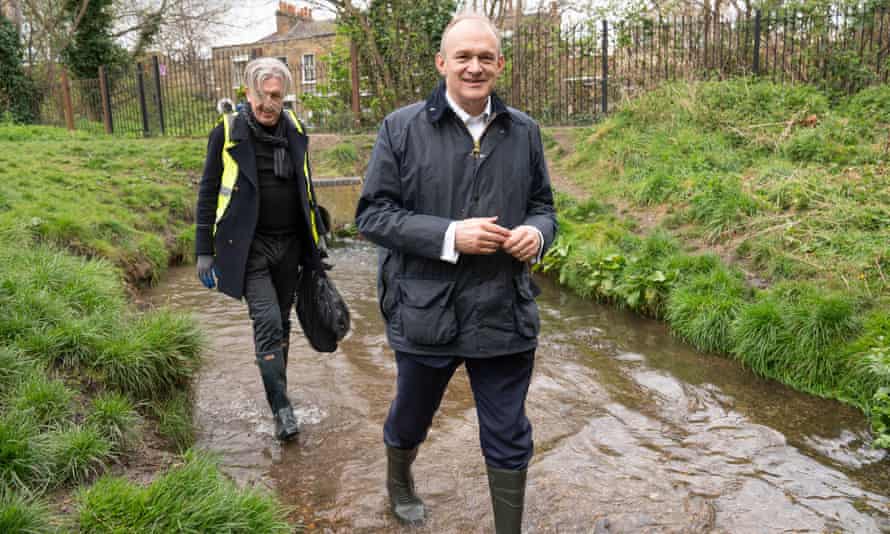 On the doorstep in Trinity ward, which has two Tory councillors along with one Lib Dem, Kohler is recognised by many of those he approaches along a street he says he will have canvassed three times before the campaign is out.

His reception is generally positive, with his first resident, Louise, saying she will vote a mixture of two Lib Dem and one Green for an “unambiguous vote” in favour of environmental action, and she will not go for “complacent” Labour. Another resident, Andrew, says he will “possibly” support the Lib Dems but is weighing up them up with the Tories.

But he gets a roasting from one woman, Jennifer, who lays into Davey’s stance on trans rights as “a disgrace” because she says he cannot define what a woman is and that women are under threat of “having our rights taken away behind our backs”. The former Labour voter says she feels similarly about Keir Starmer, saying “Labour is finished” and that she does not like the way they have been running the council. Despite her harsh words for Davey, she says she will probably vote Lib Dem at the locals anyway.

Among the Conservative activists in Wimbledon, one of them says the contest is harder fought than ever, describing his most recent outing on the Saturday doorstop as “a bit of a disastrous reception”. He says the view is “hardening” against Johnson among liberal metropolitan centre-right Tories, with little sympathy for his excuses over Partygate and concern about tax rises.

The Lib Dems are feeling chipper after surprise byelection wins at Chesham and Amersham and North Shropshire. They believe this test at the local elections in places like Wimbledon will show they have the potential to break new electoral ground in 2023-24.

‘Drain the lake, import more sand and build a bigger car park’: How to ‘save’ Ruislip Lido that has become a ‘dump’, according to...