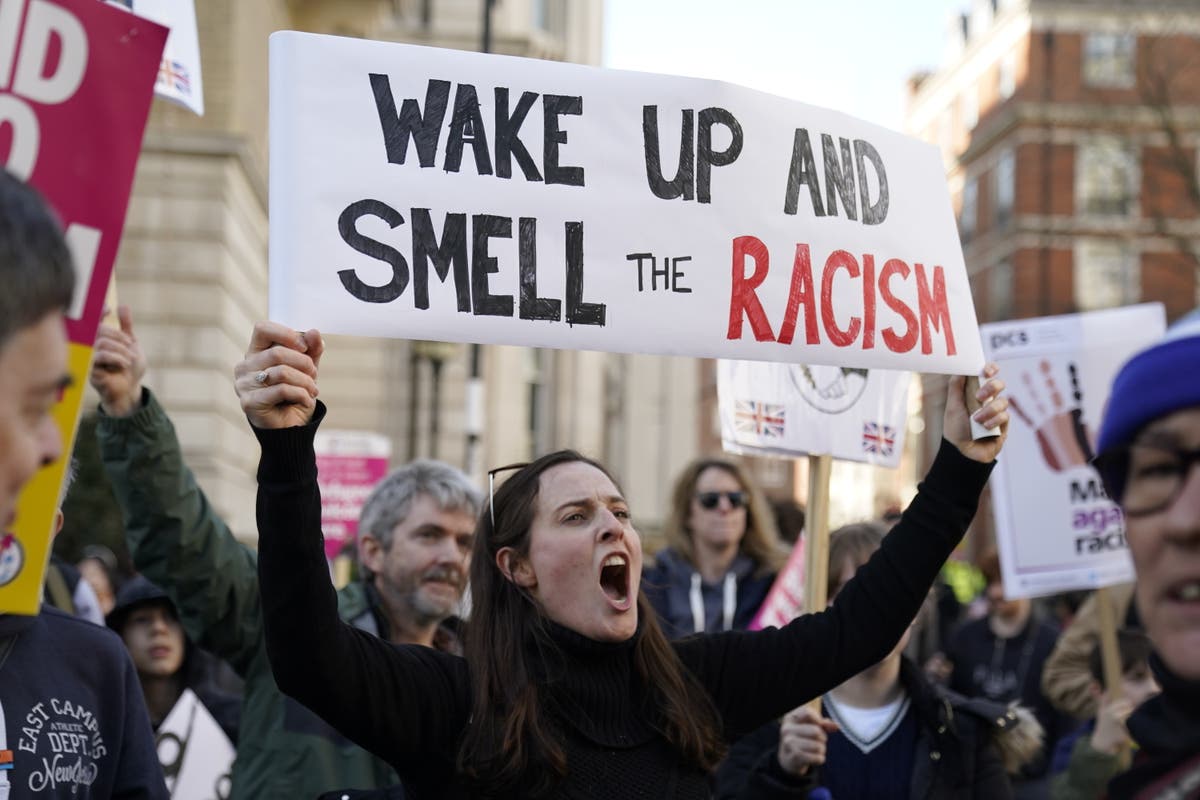 emonstrators took to the streets in central London to protest against racism after a report revealed a black schoolgirl had been strip searched on her period.

A crowd marched on Whitehall on Saturday demanding an end to racial discrimination following the publication of the report in March.

Among those taking part were a number carrying signs which highlighted the story of the Hackney teenager, referred to in the report as Child Q.

Taking to a stage in front of the crowd, activist Chantelle Lunt, of Merseyside Black Lives Matter, demanded justice for the schoolgirl, known as Child Q.

She said: “She is every one of our children, she’s not just someone else, she is our child and we have to fight for her.

The march, organised by activist group Stand Up To Racism, coincided with UN Anti Racism Day, and also highlighted a number of other issues including the plight of refugees.

The Local Child Safeguarding Practice Review, was conducted by City & Hackney Safeguarding Children Partnership (CHSCP) following the incident at the end of 2020.

It found that the “traumatic” search of the 15-year-old black schoolgirl by Metropolitan Police officers took place at the her school without another adult present, and in the knowledge that she was menstruating.

It said that racism “was likely to have been an influencing factor” in the decision to carry out the search on the girl.

After teachers called the police to the 15-year-old girl’s school, they conducted a strip search where the schoolgirl’s intimate body parts were exposed and she was made to take off her sanitary towel, according to the review.

Protester Danielle Parker, 39, said: “Obviously, we don’t know all the details of the case but it just seems a bit bizarre that that’s the first thing they think to do and then to leave her in the company of police officers without any appropriate adult with her.

“My niece is black and she’s 15 years old and I can’t imagine her going through something like that, it’s life-scarring, life-changing.”

Another attendee, Claire Wormald, 56, described the incident as “absolutely barbaric”.

She said: “Obviously, as we know, we’ve just seen all these institutions that continue, and absolutely continue, to attack black people, like recently as we’ve seen this school student in London as well who was basically strip searched and humiliated so it’s about fighting against that.”

Scotland Yard has apologised and said the incident “should never have happened”.

Mayor of London Sadiq Khan wrote to the Independent Office for Police Conduct (IOPC) on Wednesday to argue that the officers involved should be charged with gross misconduct rather than misconduct, because of the review’s finding that racism had a role in the decision to conduct the strip search.

London weather: Return to sunshine with a big warm up on the way this weekend