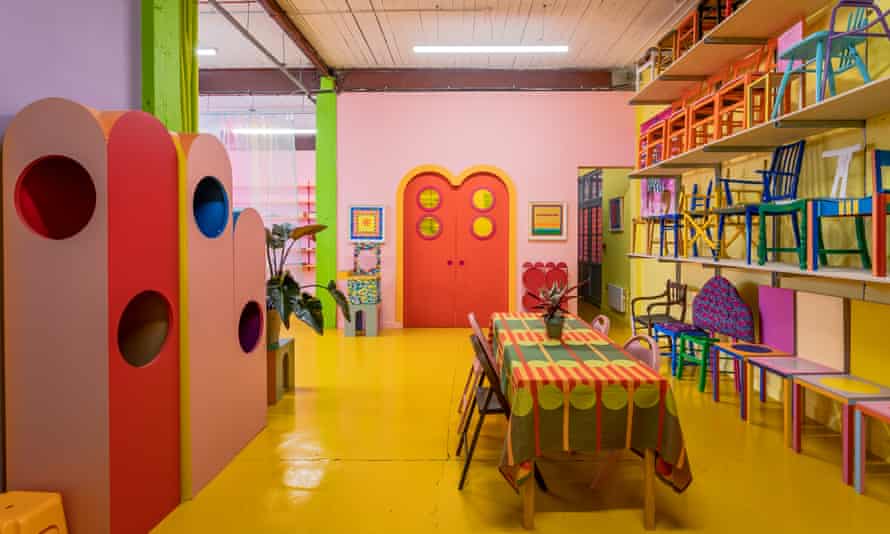 The clashing, freshly painted surfaces of Yinka Ilori’s new studio in west London serve as a colour palette for his design team. “I’ll sometimes find them looking around to find tones to apply to projects,” says the British-Nigerian artist and designer. As you step into the space, there’s a strong powder blue on the wall to your left, a just-paler-than-bubblegum pink on the right, verdant green curtains hang from the high ceiling, and mustard yellow graces the floor.

The whole setup is playful: objects and artwork pop with pattern wherever you look. “I’m obsessed with Alice’s Adventures in Wonderland and Charlie and the Chocolate Factory,” says Ilori. “That immersive, dreamy, psychedelic-type space. When people walk in here, they lose their breath, they can’t focus. You step into a different world.” The vibe embodies Ilori’s heritage. “When I go to Nigeria and go to a market, there’s colour everywhere.”

The studio meeting space, with doors designed by Sam Jacob opening on to Ilori’s office, and model chairs he made for an exhibition. Photograph: Michael Franke/The Guardian

Wedged between MOT garages and cash-and- carries in a maze-like industrial estate, this studio is four times the size of Iloris’ previous space. He moved here last October to expand his design practice and accommodate his team of eight. Work was completed in February.

Ilori, 35, was born in north London, and spent his childhood in Islington. “Growing up in a Nigerian household, education was very important, but my parents always pushed us to find our passion.” He studied furniture and product design at London Metropolitan University. “When I finished uni, I couldn’t really see any other practice telling stories in a way that I could connect with: that’s what led me to want to start my own.”

My mum and dad had no rulebook. They would clash violet with blue or purple or green, and do it with confidence

The studio bursts with designs telling the story of his career. The back wall, which overlooks a meeting room and kitchen, is covered from floor to ceiling with rows of chairs – items that established Ilori’s name in the design world. There are traditional greasy-spoon chairs reupholstered in Nigerian fabric and painted bright blue, chairs fused together to make a single item, and one with its back replaced by a patterned headboard. “They’re precious and personal to me and to people I know,” he says.

In 2015, his show If Chairs Could Talk – telling stories through upcycled chairs – was a hit at the London design festival. “I would find these chairs around London, and I’d stack them up in my bedroom (which wasn’t that big), because my mum wasn’t having them in the kitchen. Then I’d take them to my small studio and work on them.” 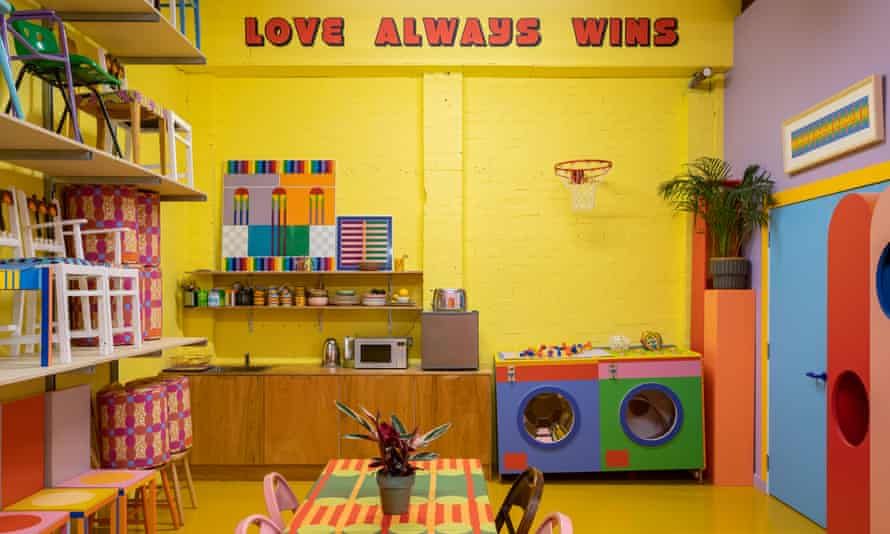 The project was influenced by the Nigerian parables he grew up listening to. “When we sit on a chair, we tell stories, we argue, we cry – we experience so many emotions with this one object,” he says. A piece from the collection was recently acquired by New York’s Metropolitan Museum of Art. Others can be bought through the studio.

Opposite are two washing machines made from Lego. They were part of an installation called The Launderette of Dreams, which he designed through workshops with primary schools in east London last year. More than 200,000 Lego bricks were used to reimagine a community launderette as an electrifying play space.

Behind his desk sit three vibrant basketballs: one is in a winning design by a schoolgirl from east London, as part of a competition run by Ilori. It’s an element of a playground redesign he did with local people, which opens later this month to mark the centenary of Becontree, the UK’s biggest council estate. 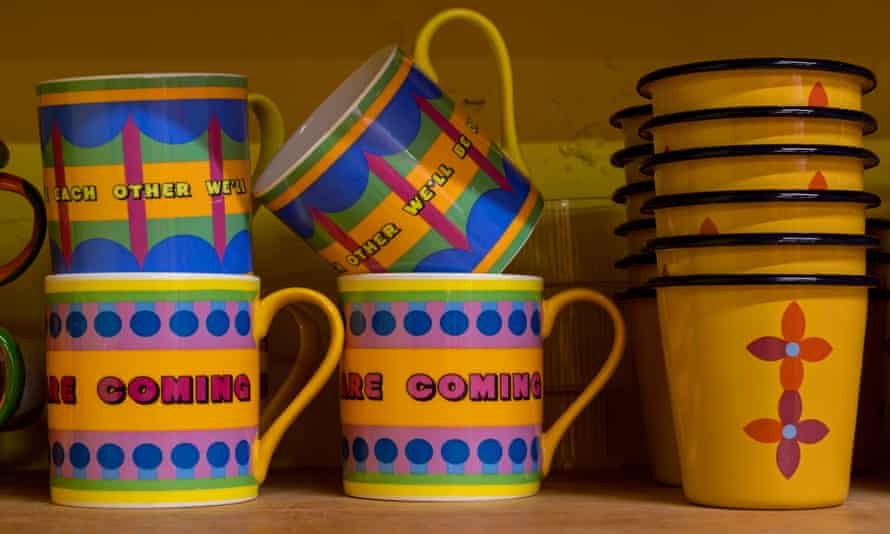 “I grew up on an estate,” he says. “Galleries weren’t a thing we’d go to, but now I’m taking high art – or whatever art – putting it in an estate and saying, ‘You deserve to experience art as well.’ I’m just trying to say art is for everyone.” His dream is to one day have a Yinka Ilori sculpture park.

Ilori has transformed nondescript street crossings on Tottenham Court Road with arresting murals in his signature colours and patterns. “I have found people standing in the middle of the road trying to take a selfie, risking their lives,” he says in disbelief. “When you see my work, you can’t control your smile. The energy controls you. I quite like that.”

My home is more neutral, and I use artwork and rugs and bowls to be talking points

But not everyone is so receptive. The summer before the pandemic, he designed an outdoor pavilion at Dulwich Picture Gallery called the Colour Palace. An MP (whose name Ilori has decided not to disclose) wrote to the architects involved to say it would be better suited to a Lagos shantytown.

A common thread in Ilori’s work is joy. “In our Nigerian household, we were brought up to have a positive outlook,” he says. “My mum and dad would always tell us: ‘You’re amazing.’ I try to adopt that in the work I do.” He is influenced by the fabrics his family wore to weddings and church services. A large painting of his grandmother hangs next to the chairs. “What she’s wearing, there’s a sense of pride in that cloth. It could be Swiss voile lace or Ankara fabric, exclusive and rich in colours. Seeing what joy it gave, it was natural for me to bring it into my work.”

Because of the public nature of Ilori’s work, the pandemic saw many projects fall away, but new opportunities arose, too. “I couldn’t get to the studio: people weren’t commissioning work,” he says. “Everyone was at home, and people were cooking loads – I was cooking jollof rice and sharing it online with my mates. People started investing in their homes because home had to be a place that was going to bring joy.” 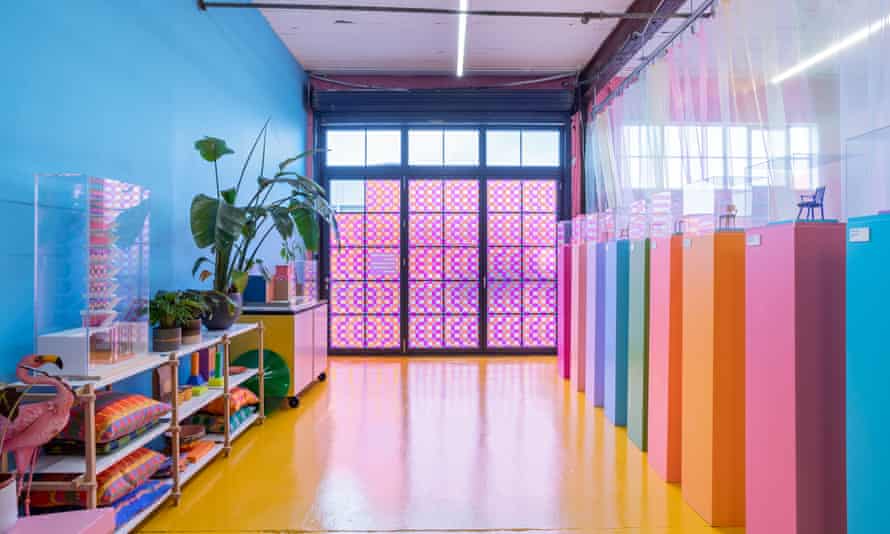 We sit at a table covered in jacquard cloth from the homewares collection Ilori designed during lockdown. We drink from enamel tumblers decorated in a retro flower print, and on the kitchen shelves are his mugs with the slogan “Better days are coming, I promise”. Ilori’s favourite pieces in the collection are Tibetan wool rugs with geometric patterns surrounded by a contrasting border.

“I’ve just taken one home for myself,” he says, as if owning up to something he shouldn’t have done. “It’s funny,” he says, “because at home I don’t have a lot of my own pieces. It’s more neutral and I use artwork and rugs and bowls to be talking points of colour. My studio is where I’m chaotic and dream, and then my home’s where I might light a candle and chill.”

The studio space appealed to Ilori because of its “brutalistness”. He worked with designer Sam Jacob to plan it; the feel is open, with opportunities for privacy. Jacob designed grand, arched red sliding doors with portholes that open on to Ilori’s office in a theatrical Willy Wonka style. The fourth wall of Ilori’s office is a double-layered curtain between him and his team. The first layer is a transparent, pastel-rainbow gauze, designed by Peter Saville for Kvadrat, called Technicolour Flux. Accompanying it, when he needs privacy, is a heavy green curtain. “Everything is movable,” he says. “The fabrics create shapes.”

Does he have tips for choosing bold colours for home interiors? “If a colour makes you feel positive,” he says, “trust your gut and apply it. For me, pink is calming.” He admits that at first he regretted the yellow floor, but after a week realised it worked. “My mum and dad had no rulebook. They would clash violet with blue or purple or green, and do it with confidence. I just try to avoid looking at the Pantone colour of the year.”

Sign up to our Inside Saturday newsletter for an exclusive behind the scenes look at the making of the magazine’s biggest features, as well as a curated list of our weekly highlights.

Last month, Ilori ran a workshop for inpatients at a London mental health facility for a charity called Hospital Rooms. “I went in and I didn’t tell them what my work’s about; I just said I was an artist and selected the colour palette for them to use. And they opened up about the things they care about and I had them paint messages on chairs. They actually wrote ‘Hope’ and ‘Dreams’, and I can’t forget that. It touched me – something about my colour palette evokes hope.”

London property: flat on market for £875 a month but you have to sleep next to the fridge