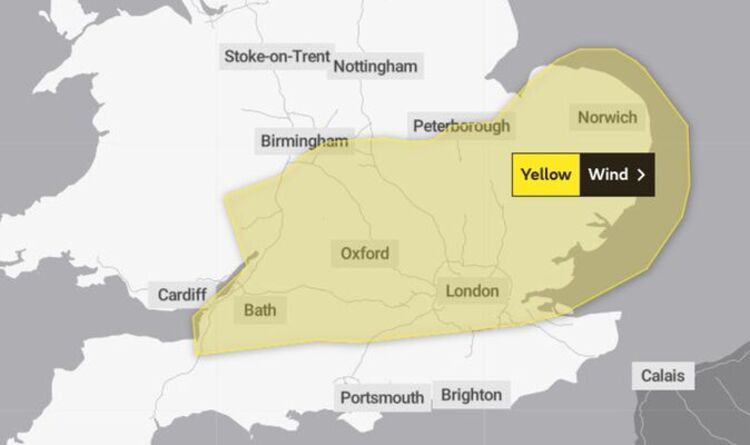 Weather warnings for South West England, East of England, West Midlands, East Midlands and South West England, as well as London & South East England, are in effect until 6pm on Thursday. The Met Office said: “Winds will strengthen across central England this morning with gusts widely 45-50 mph developing and a few places seeing gusts around 55mph. Winds will ease from the west from later in the afternoon.”

The Met Office said “gusty winds are expected through Thursday with some disruption in places”.

People have been warned to expect some delays to road, rail and air transport, while some bus and train services will likely be affected, with some journeys taking longer.

There is also a high possibility of delays for high-sided vehicles on exposed routes and bridges.

In its latest weather forecast for Thursday, the Met Office warned of winds and the possibility of gales hitting coastal areas, making it feel increasingly cold.

The forecaster said: “Bands of rain or showers will move southwards across many parts with some snow on northern hills.

“Some drier, sunnier interludes, especially in the south this morning.

“Windy for many with gales affecting some coasts, and feeling cold.”

Netweather Senior Forecaster Nick Finnis said winds of up to 70mph had been recorded overnight in West Wales and North West England, with gusts of up to 60mph possible in areas during the course of this morning.

These will be in effect from 10pm on Thursday until 9am on Friday.

Motorists have been warned wintry showers overnight and early tomorrow morning “may lead to some difficult driving conditions and travel disruption”.

The Met Office said: “Frequent, often heavy showers of rain and sleet will give a risk of icy stretches overnight and into Friday morning away from northern coast roads.

“Showers will turn to snow inland above 150 m, with accumulations of 1-2cm.”

People in the affected areas have been warned to expect some icy patches on some untreated roads, pavements and cycle paths.

Some roads and railways will also likely be affected with longer journey times by road, bus and train services.