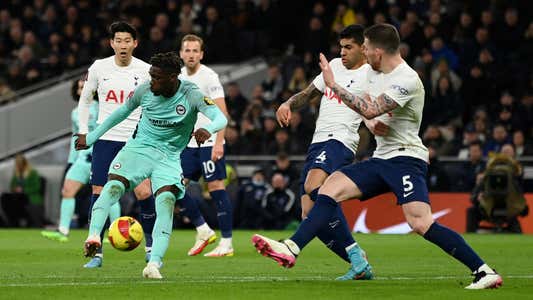 Aston Villa and Arsenal target Yves Bissouma was a dominant player for Brighton and Hove Albion in their 1-0 Premier League win over Tottenham Hotspur on Saturday.

Brighton secured the win courtesy of Leandro Trossard’s clinical 90th-minute finish past Hugo Lloris. Trossard has netted six goals in the league this season, which is his best-ever return in the competition, eclipsing the five he scored in both 2019-20 and 2020-21.

Meanwhile, Bissouma was a solid performer for the Seagulls as he was near-perfect defensively, and did a good job of breaking down Spurs’ attacks. The 25-year-old, who is understood to be on his way out as Villa and Arsenal are said to be interested, was instrumental as they brilliantly picked up another win in London after beating Arsenal last week.

Bissouma and his teammates registered a first victory at Tottenham since 1981 as they also dimmed their hosts’ chances of finishing in the top four. A win would have seen Spurs go six points clear of Arsenal in fourth position.

The Gunners – who play Southampton on Saturday, could move level with Spurs, although they enjoy a game in hand.

The Seagulls are only the second team in Premier League history to win away at both Arsenal and Tottenham in consecutive league games after Hull City in October 2008.

The London side were shambolic and did not register a single shot on target over 90 minutes, even though they had scored at least twice in each of their previous seven matches.

As Bissouma enjoyed a stellar outing, his teammate Enock Mwepu walked a tightrope after he was booked for a challenge on Sergio Reguilon and could have easily been sent off after stepping on Pierre-Emile Hojbjerg. The Zambian was later replaced by Danny Welbeck in the 46th minute.

The loss at the hands of Bissouma’s teammates means Tottenham have now lost three of their last six home Premier League games (W3), as many defeats as they suffered in their previous 14 on home soil (W10 D1).

On the other hand, Brighton have won consecutive away league games for the first time since September 2021 and are now unbeaten in three league games overall, winning the last two, after losing each of the six before that.

Bank Holiday Monday traffic updates for the Dartford Crossing, M25, A12, A120 across Essex – Recap